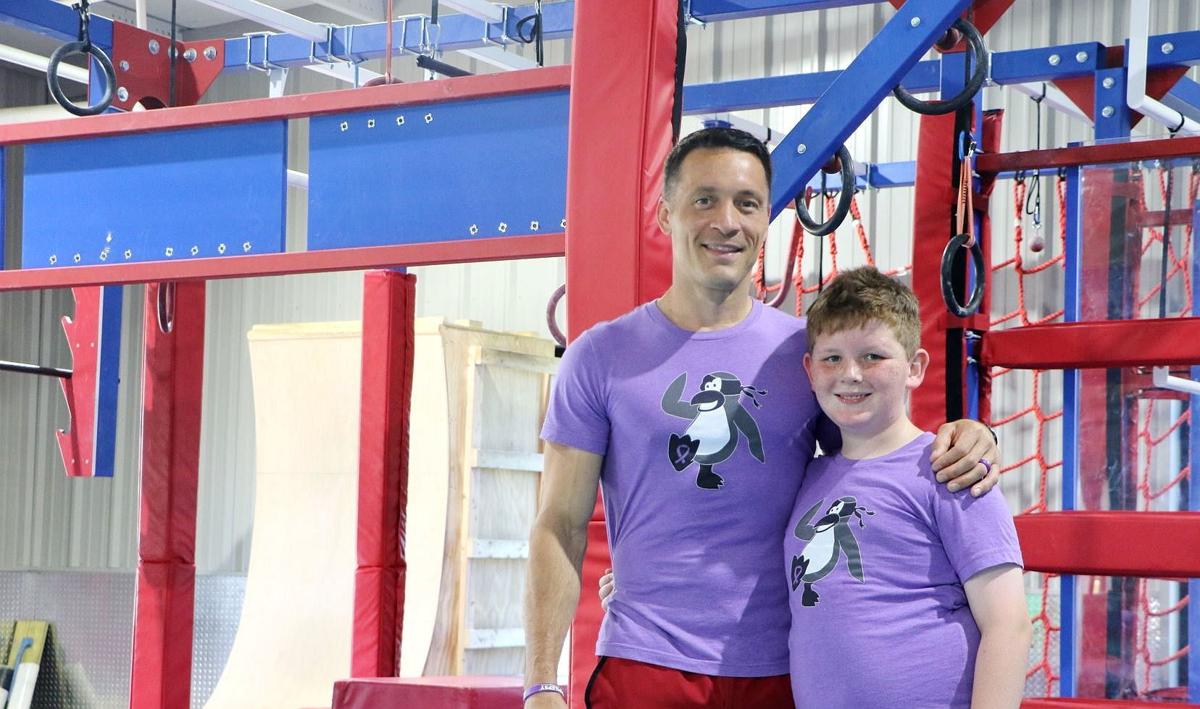 Owasso’s Tom Mortimer has competed on NBC’s “American Ninja Warrior” four times, dedicating his runs to his son, Landon, who was diagnosed with epilepsy in March 2018. Here, the father-son duo is pictured at Mortimer’s Owasso gym, Airbenders, in October 2019.

Tom Mortimer isn’t one for small feats — and he has four runs on “American Ninja Warrior” to prove it.

The 42-year-old Owasso resident first competed on the popular NBC show when it filmed in Oklahoma City in April 2019, dedicating his run to his 12-year-old son, Landon, who was diagnosed with epilepsy a year before.

He has since spent his time training on a customized ninja obstacle course at Airbenders in Owasso, which has led him to face the grueling course three more times — his most recent run airing on June 1 in the first episode of the show’s 13th season.

His fourth appearance in the national spotlight, however, was backed by the support of a familiar face among the Hollywood elite, Greg Grunberg, best known for playing Matt Parkman in the hit series “Heroes” and Snap Wexley in “Star Wars: The Force Awakens.”

Grunberg, whose son, Jake, also has epilepsy, created TalkAboutIt.org in partnership with the Epilepsy Foundation to raise awareness about the disorder, and tuned in virtually during Mortimer’s latest run to cheer him on.

“… He’s just our hero; he’s going to kill it; we can’t wait,” Grunberg said on the show just before Mortimer got the green light to advance. “Go Tommy! Go get em’ buddy!”

Mortimer came out of the gate with a promising pace, but eventually fell when he lost his grip on the fourth climbing obstacle, Tipping Point. His disappointment was short-lived, though, after seeing Grunberg and his son continue to cheer him on.

The experienced competitor and longtime Tulsa zookeeper told the Owasso Reporter how grateful he was for Grunberg’s support, which only went to further represent Mortimer’s ninja team, the Purple Penguin Epilepsy Warriors.

“It’s very humbling to say the least,” Mortimer said. “You’ve got someone with his star power, what he’s done in his life … Having someone like him that’s such a big part of Hollywood, a big part of everything he does, it was amazing.”

Mortimer took to the course with his signature purple T-shirt, complete with a penguin on the front and the phrase “Epilepsy Warriors, 1 in 26” on the back, reminding viewers that one in 26 people are likely to be diagnosed with the disease.

He also donned a bracelet on his arm with the words, “End Epilepsy,” which he wears regularly to remind him of his son’s perseverance and to inspire him to reach beyond his own limitations.

Landon has now gone nearly three years without a seizure — about the same time his dad has been competing on “American Ninja Warrior” — which is a vast improvement from the multiple absent and tonic-clonic episodes he once experienced on a monthly basis.

“We’ve been very fortunate,” said Mortimer, who continues to advocate for others dealing with epilepsy on the road to recovery. “There’s so many people going through so much worse, and we feel very grateful that we’re able to be a part of this to help other people.”

Mortimer has yet to hit a buzzer on the show, but is more focused on spreading the word about epilepsy and available treatments by participating in Purple Piece Foundation’s annual Cruise for Consciousness Car Show and Epilepsy Foundation’s annual Athletes vs. Epilepsy, to name a few events.

Mortimer is looking forward to continuing to work with Grunberg and his website on behalf of his son and the millions of people nationwide who suffer from epilepsy and its ongoing effects.

“I love that he (Greg) advocates for it,” Mortimer said. “I get to be a part of a bigger picture, something that he’s doing, and obviously I think it’ll have a huge impact here for us too, in Tulsa and Owasso and our area.”

Meet Owasson Tyler Wick with Scoop Soldiers, who answers some fun questions about his life and career.

Owasso’s Tom Mortimer has competed on NBC’s “American Ninja Warrior” four times, dedicating his runs to his son, Landon, who was diagnosed with epilepsy in March 2018. Here, the father-son duo is pictured at Mortimer’s Owasso gym, Airbenders, in October 2019.