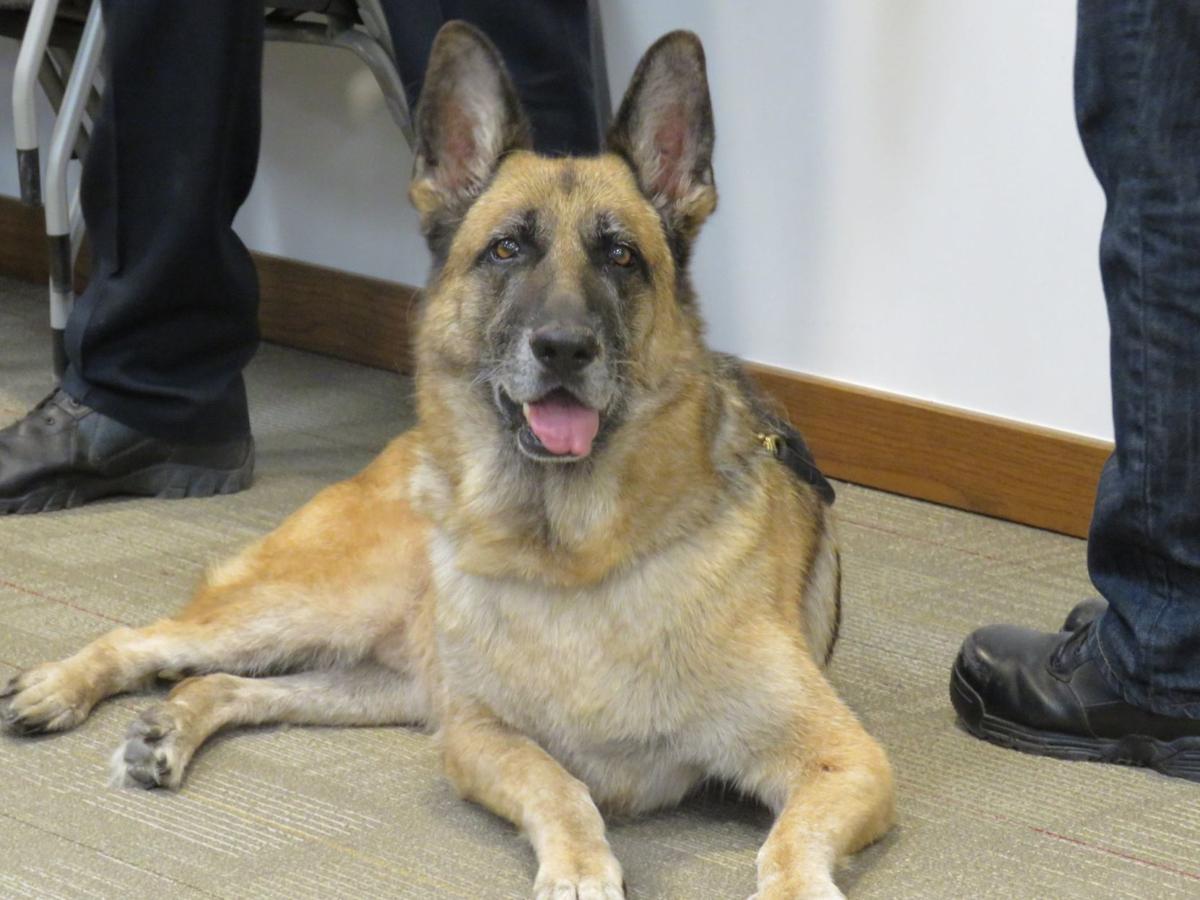 Samson, who passed away at the age of 11 on July 9, is pictured during his retirement ceremony in July 2017. 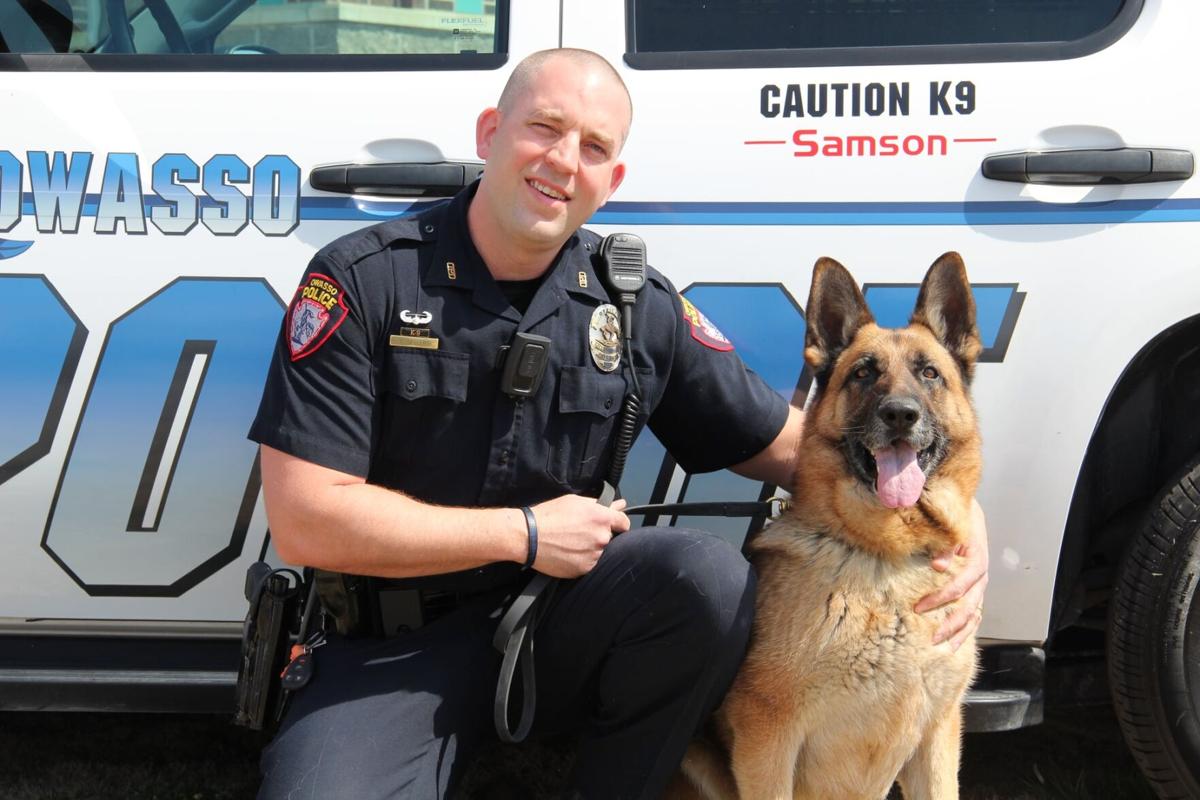 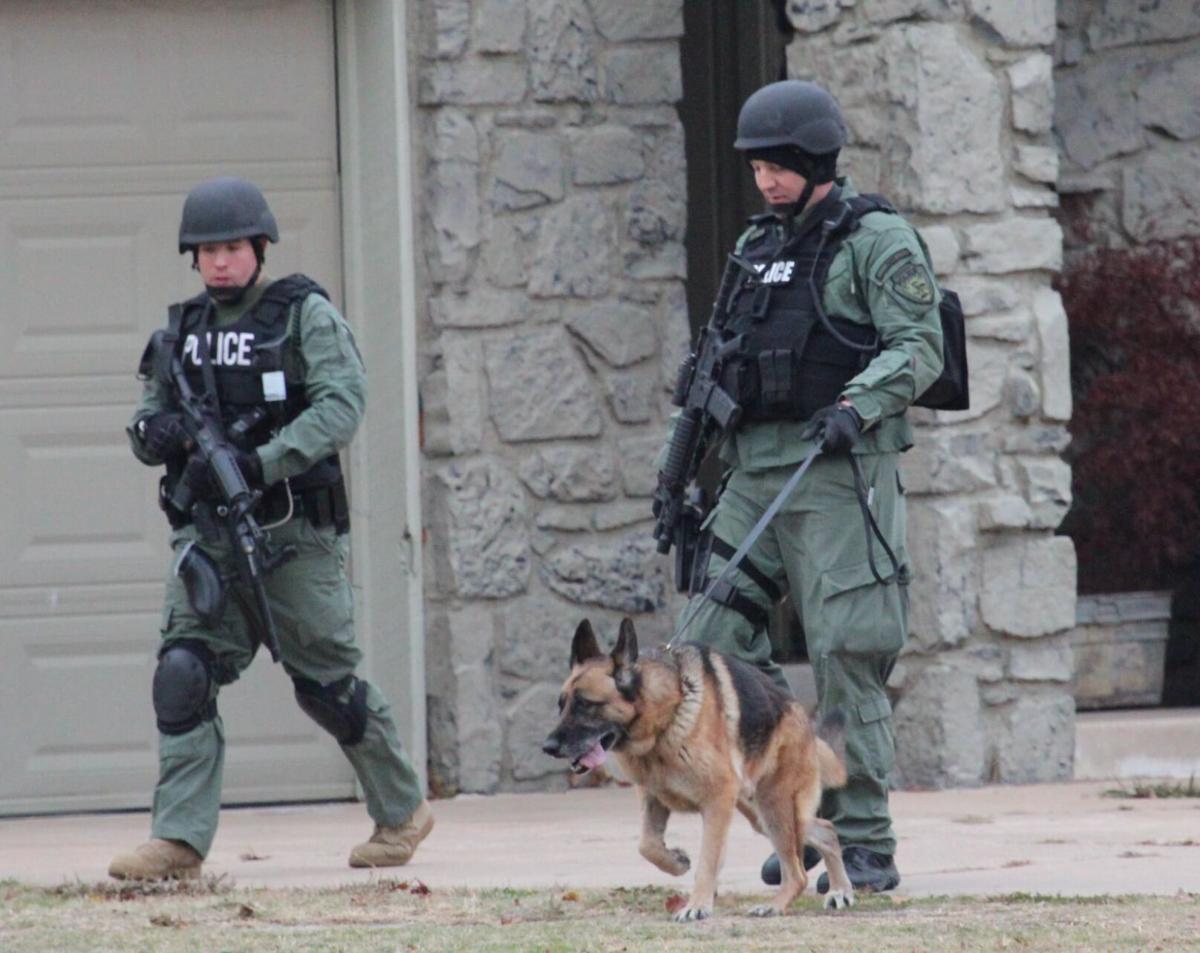 Samson was involved in several drug searches and criminal apprehensions, and was even injured in the field on a few occasions. 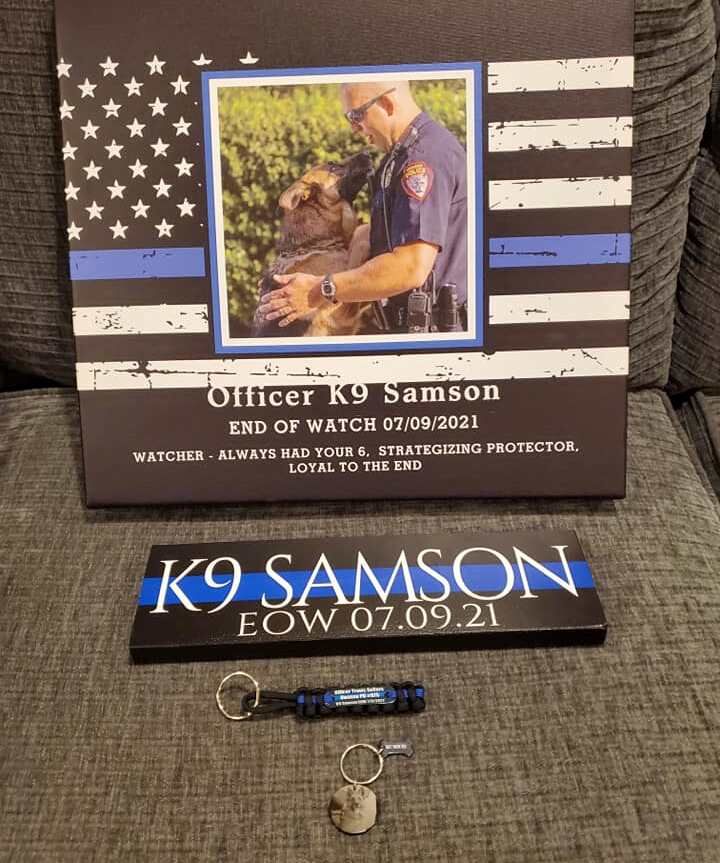 The last thing that Owasso police K-9 Samson saw before crossing the Rainbow Bridge was those he loved the most, including his longtime handler, Travis Sellers.

Sellers’ words for Samson, who served at the Owasso Police Department from Jan. 2012 to June 2017, would resonate as a lasting reminder of their inseparable bond formed over the last several years on the force.

It all started for Sellers in June 2013 when an unexpectedly peaceful encounter with Samson — a quick-tempered K-9 at the time — gave him a good reason to take over as the dog’s handler for fellow officer Eric Walke, who had planned to leave the department.

“Samson was walking next to me and he just reached up to lick my hand; I squatted down and … he liked my face,” Sellers said. “I remember looking up at Eric, and he was white as a ghost, and he was like, ‘He should have bitten you.’

“He (Samson) just acted like any other dog, just friendly, and that was uncharacteristic of him with strangers. I felt like we had a connection.”

That special bond led the close-knit duo to keep the streets of Owasso safe over the next four years until Samson retired in June 2017.

Considered a “no-nonsense” crime fighter, the impassioned Samson was well trained and assigned the weekend night shift, where more dangerous calls occur in higher frequency. He was involved in several drug searches and criminal apprehensions, and was even injured in the field on a few occasions.

“Alert and attentive,” Sellers said of Samson’s demeanor on duty. “Always watching me … he was on point … his nose was sharp.”

Samson’s headstrong temperament on the streets, however, paled in comparison to his subdued behavior at home, which played to Seller’s similar personality and complemented their relationship, both on and off the clock.

“Behind the scenes, we’re both just really soft-hearted,” he said. “I want people to see that side of him (Samson) … the side of all the pictures I posted on Facebook where he was licking my daughter in the face or out there where they’re playing in the yard.”

One particular pastime they shared at home that Sellers said he’ll miss the most, for example, is their morning and evening routines.

“We’d make up, I’d disarm the alarm, go out to the back patio, and he’d follow … just come sit and lay down next to me,” Sellers said, “and the same thing at nighttime … he’d just come walk up to me and just put his head in my lap and let me love on him.”

Those sentimental moments between two best friends continue to serve as a reminder for Sellers that Samson is far from gone, but lives on, rather, in the hearts of those he protected — and captivated — during the nearly dozen years he walked this earth.

“He was definitely just a unique dog,” Sellers said. “He was really a sensitive, kind, loving dog to people that loved him, his family.”

As Samson took his last breath at the age of 11 on Friday, July 9, his devoted handler and closest confidant left him with one parting thought to carry with him into eternity.

“I just whispered in his ear … that he was the best friend and protector anybody could ask for.”

“It’s just incredible, just everything I’d ever dreamed of,” said Callan, who faced the tide in the Tokyo Aquatics Centre alongside teammates Drew Kibler, Andrew Seliskar and Blake Pieroni.

Rustic Barbour debuts in downtown Collinsville: ‘Everything looks to the tune of the name’

The novel parlor, which debuted in Collinsville's historic downtown at the beginning of September, offers residents a unique atmosphere — complete with rugged and patriotic décor — to meet all their grooming needs.

The City of Owasso’s Strong Neighborhood Initiative is celebrating 25 years of hosting its community-wide Neighborhood Block Party this month.

Two students from Owasso — Ronald Walker with Owasso High School and Brianna Herrold with Rejoice Christian School — were listed as recipients of the prestigious endowment.

Owasson Autumn Rosenthal, a senior psychology and sociology major at the Claremore-based campus, recently helped spearhead a campaign for the school to raise awareness about eating disorders.

A total of 72 individuals registered their vehicles for the show — from polished classics to renovated rides — which drew a large crowd of spectators.

The 17-year-old Owasso boy was transported by Life Flight to a local hospital, where he was admitted in serious condition with a head injury.

Owasso has recorded 7,022 confirmed total coronavirus cases and 6,634 recoveries, along with 91 deaths. OPS has reported 70 COVID-positive cases in isolation out of 10,587 in-person individuals across the district.

Samson, who passed away at the age of 11 on July 9, is pictured during his retirement ceremony in July 2017.

Samson was involved in several drug searches and criminal apprehensions, and was even injured in the field on a few occasions.