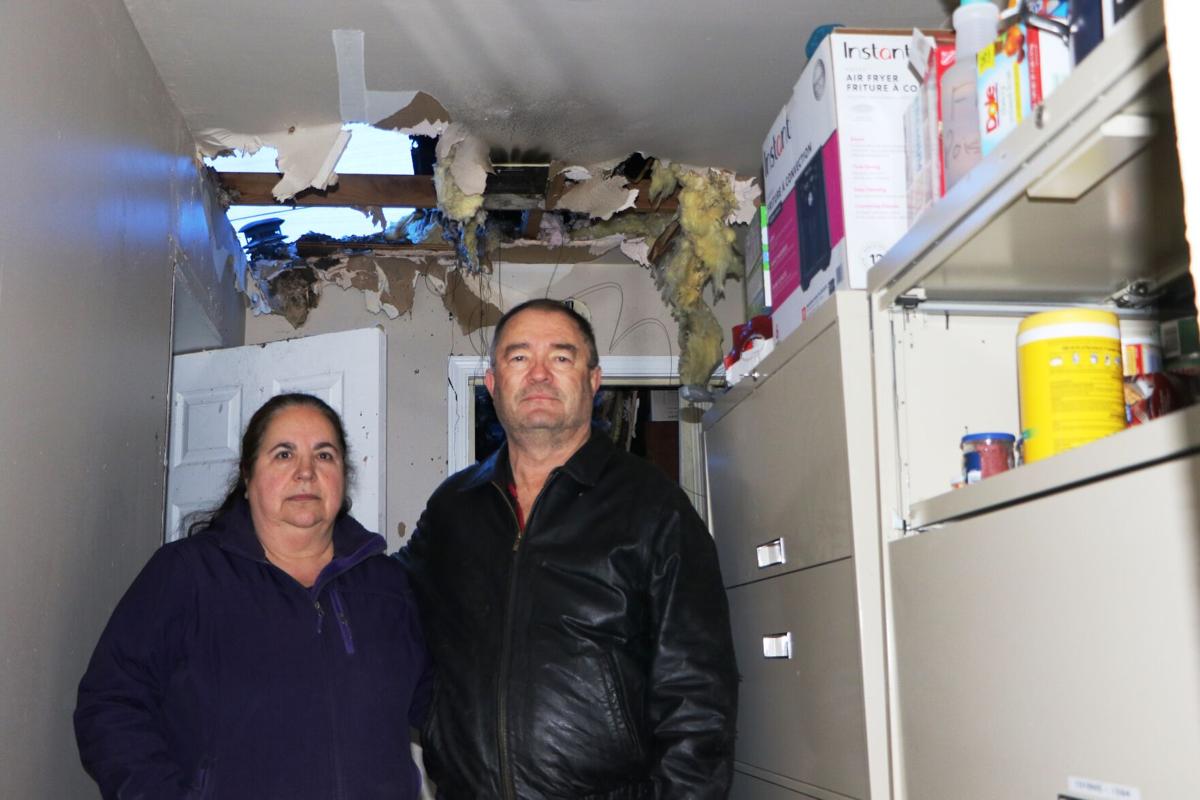 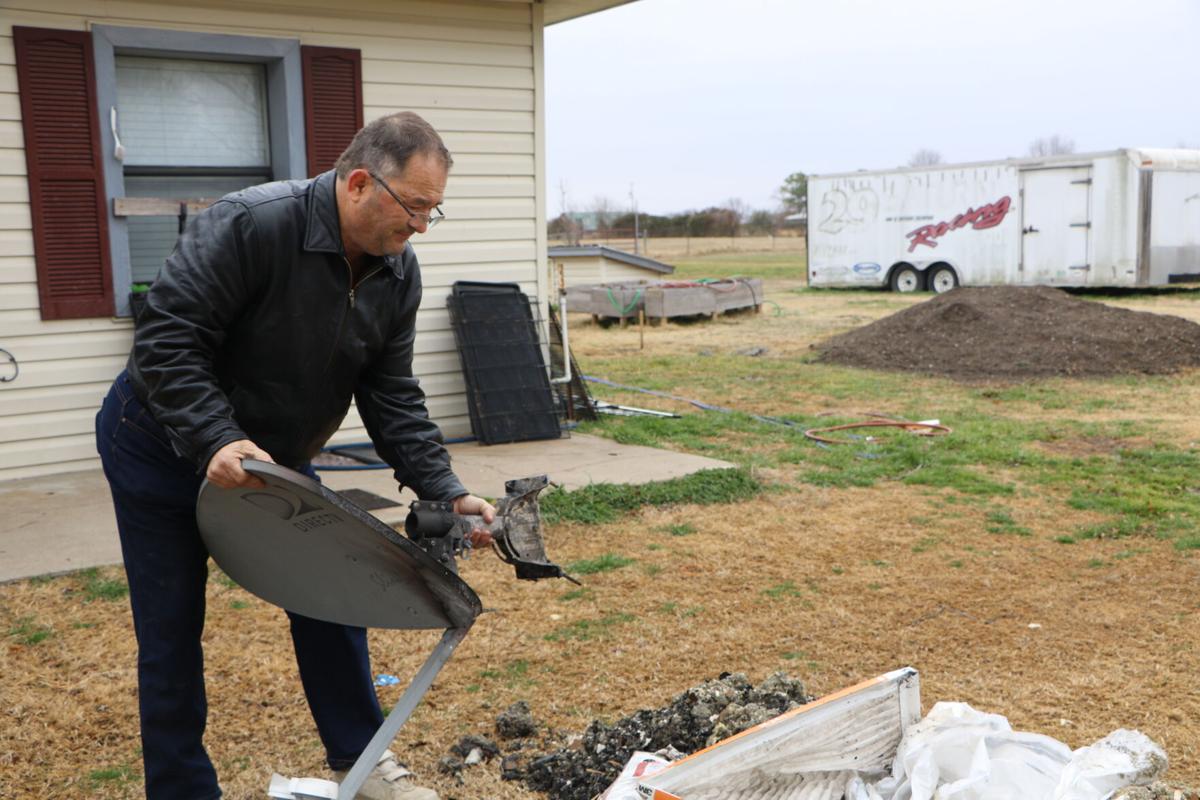 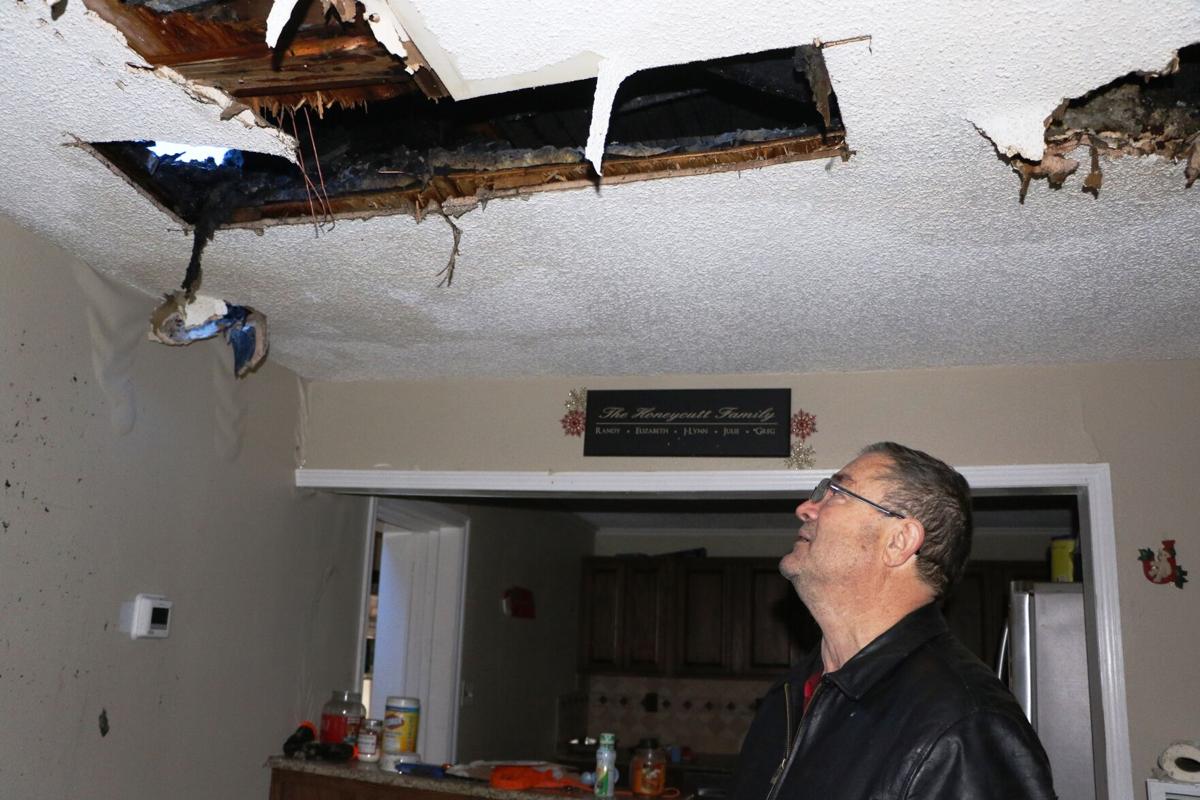 Randy and Elizabeth Honeycutt say it’s nothing short of a miracle that they’re alive.

The local couple recently survived an early morning fire at their Collinsville home, and they have an unknown passerby to thank for their rescue.

It all started around 4 a.m. on Monday, Jan. 4, when Randy, who was sleeping next to his wife on the second floor of their rural residence, awoke to the smell of smoke and the sound of loud pounding at their front door.

He and Elizabeth scrambled to gather what little they did take and find a way to escape the fire, which had already engulfed a large portion of the roof above their living room, filling the house with smoke.

“We could hardly see,” Randy said. “I mainly started kicking out the windows to figure out the best way out. I immediately went downstairs, opening windows so the smoke can go somewhere.”

The Honeycutts spent the next several minutes struggling their way through the haze until finally clearing out into their garage, where they breed French bulldogs. The couple has been raising dogs for 30 years, with much of their business conducted from the two-car port.

“I started opening the garage doors because we had (the dogs) in there,” Randy said. “I’m just hollering, ‘Get the dogs out, get the dogs out!’”

It wasn’t long until he and his wife, and over a dozen K-9s, made it safely outside and waited for first responders to arrive amid the cold temperatures.

“It was freezing that morning,” Elizabeth said. “Frost and ice on the ground, I was running out barefoot.”

It took fire crews the rest of the early morning to extinguish the blaze, which — between the flames, smoke and hundreds of gallons of water — left the Honeycutt’s home destroyed.

“It was a good, steady fire,” said Randy, who has lived at the residence for the past 10 years. “There’s about an 80-foot hole in my roof. My house it totaled … everything in the house is ruined.”

The thousands of dollars in damage came just a few months after the Honeycutts made several renovations to the home, including a complete overhaul of their downstairs’ bathroom and the addition of new flooring in their living room.

Despite their loss, the Collinsville couple said they are alive thanks in large part to the kindness of an anonymous stranger who pulled into their property after seeing the flames and warned them of the impending danger.

“This guy comes down this road … he stopped, open my gate, came in, broke in my door … to get our attention,” Randy said. “He went above and beyond to get us awake.”

Before getting a chance to meet the good Samaritan, the Honeycutts learned that he left shortly after hearing they made it outside safely. Randy said he’s confident it wasn’t a coincidence that the man showed up at their doorstep.

“I’m telling you what, I believe this with all my heart, 10 more minutes, me and my wife (would be) dead,” he said. “I believe God sent me an angel. This guy saved our lives, and I want to say thank you.”

Elizabeth added, “He saved our lives. He saved our animals, and if he hadn’t, who knows what.”

The Honeycutts are now in the process of picking up the pieces and moving forward. They have rented a large mobile home and parked it alongside their property to live out of until they can permanently settle back into their old house.

Randy, who is a retiree of the international freight shipping business, couldn’t help but still smile as he walked around his property and assessed the damage a few days after the fire. His excuse: a silver lining that came in the form of a divine intervention.

“I’m doing well,” Randy said. “When you’re 65 and God sends an angel to your house to wake you up, it tells you, He’s got more time for me on my plate.”

When asked what she took away from the incident, Elizabeth simply replied, “Just that we made it … that we’re safe.”

Walter Kerr, 84, was driving eastbound on 126th Street North, when he veered left and crossed the center line, striking a traffic sign.

The new partnership with allow Sunvair to expand the Owasso company’s portfolio of services and equipment in the national aerospace industry.

Over 100 employees at Bailey Medical Center, for example, have received a vaccine in the last two weeks.

Meet Destinee Pruitt with Life.Church Owasso, who answers some fun questions about her life and career.

Staff at the vocational school recently hired on several clients from A New Leaf to clean and sanitize different areas of the campus to ramp up safety measures amid coronavirus concerns.

Every 10 years, following completion of the U.S. Census, the constitution requires lawmakers to redraw boundaries for legislative and congressional districts to reflect changes in population.

Tammy Hillis, who owns the local boutique, offering home furnishings, gifts and jewelry, said she is retiring to spend more time with her family.

Ask the Expert: “How can I best prepare for Oklahoma’s impending tornado season?”

Jeri Moberly with American National Insurance in Owasso discusses the importance of preparing for the impending storm season.