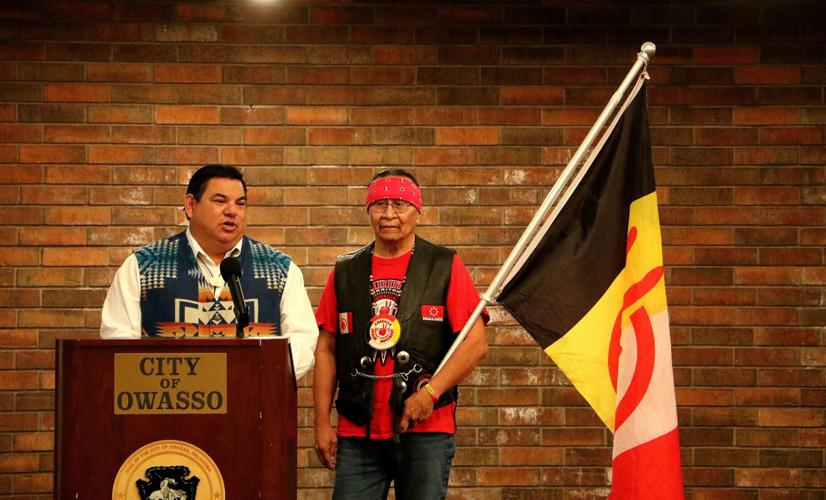 Cherokee Nation councilor Joe Deere (left) stands with a fellow tribal member during Owasso City Council’s Nov. 16 meeting to state his opposition of its recent measure calling for the reconsideration of the Supreme Court’s McGirt ruling. 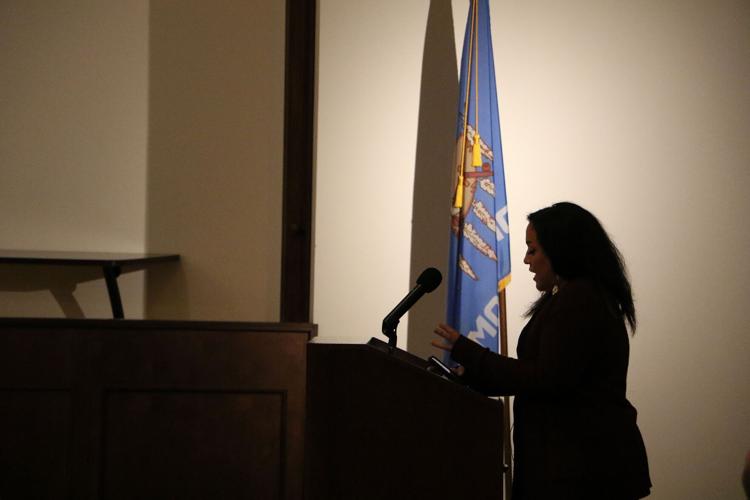 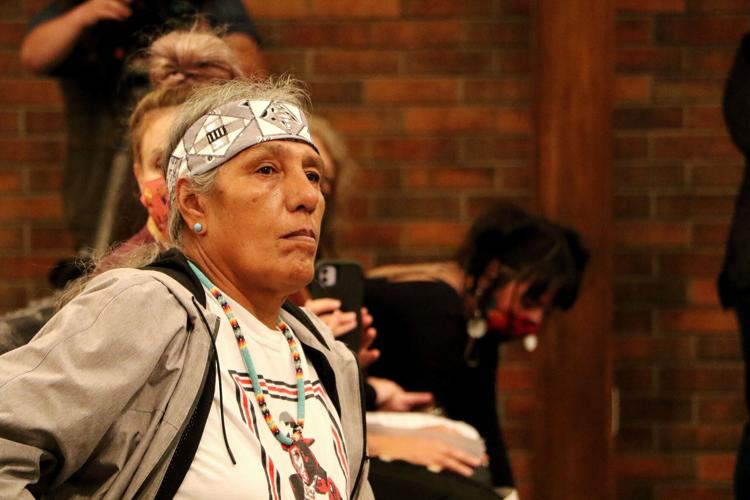 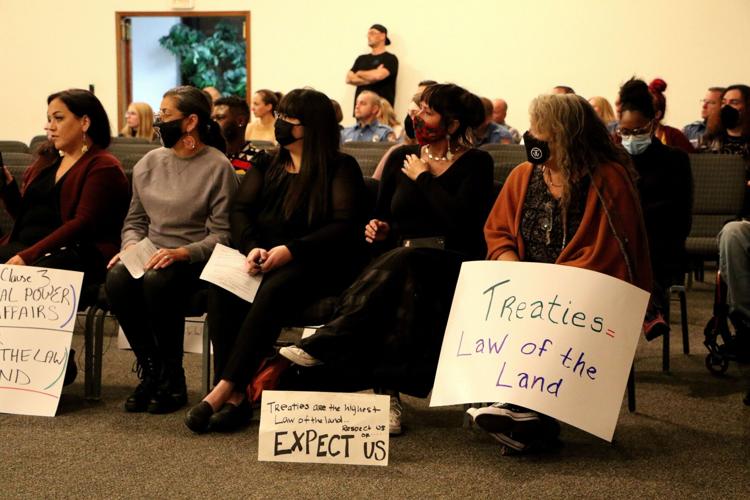 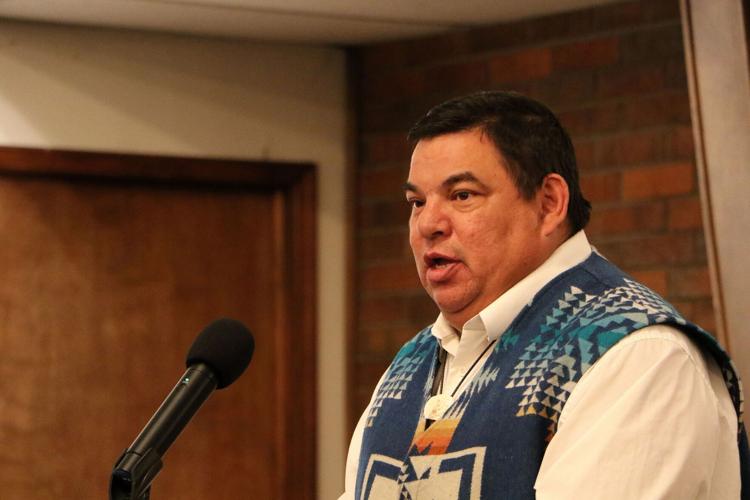 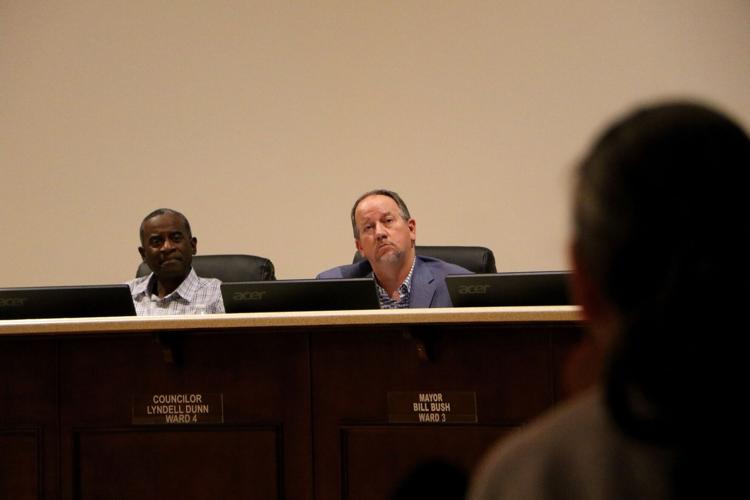 Owasso City councilors Lyndell Dunn (right) and Alvin Fruga look on while Olivia Gray, a citizen of Osage Nation, speaks to them at its Nov. 16 meeting. 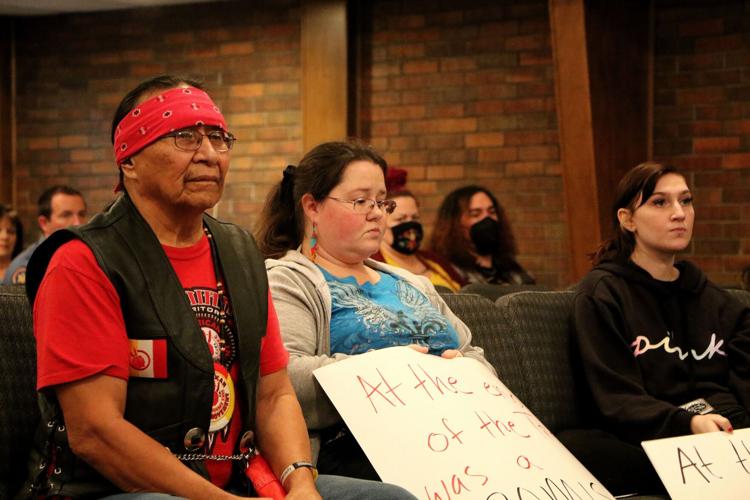 Kelsey Cooper, Cherokee Nation citizen and Choctaw descendant, for example, showed up at Council’s latest meeting on Tuesday, Nov. 16, along with several other peaceful protestors, to speak against an amicus brief filed by the City of Owasso.

“We are here, and we are the backbone of this city,” Cooper said. “I’ve been around the world, and there is nowhere that I feel safer than between 76th and 96th Street, so imagine how hurt I and many others were when we heard about the amicus brief.”

Olivia Gray, a citizen of Osage Nation, added, “I need you to really think about your partnership with tribes and what this is going to result in. This is huge for us. I think you need to rescind the amicus brief.”

That friend-of-the-court brief, jointly submitted by the cities of Owasso and Tulsa in early October, concerns the case of State of Oklahoma vs. Victor Manuel Castro-Huerta.

The Supreme Court recently overturned the sentence and judgment for Castro-Huerta, 36, whom a Tulsa County jury convicted of child neglect in 2017. His repeal came after Jimcy McGirt, a 71-year-old Native American, successfully argued that he should have been prosecuted for child sex abuse crimes in federal rather than state court, where he was convicted.

As a result, the Supreme Court redefined what prosecutors considered “Indian Country” in eastern Oklahoma when it comes to jurisdictional crime enforcement. State litigators — including those in Owasso, which is located within Cherokee Nation boundaries — now lack the authority to govern charges against Native American defendants.

“They (Oklahoma’s tribes) are actually having to bring in assistant U.S. attorneys … to try all of these cases,” Childs said in a previous story. “They really are having to create a court system practically from scratch … so it’s a challenging time.”

Owasso City Manager Warren Lehr echoed Childs’ sentiments, adding, “The aftereffects of the McGirt decision have been enormous and have caused great disruption to our law enforcement and court systems.”

Cherokee Nation councilor Joe Deere, however, who joined his fellow tribal members at Owasso Council’s Nov. 16 meeting, said the City’s efforts to potentially overturn the McGirt ruling was a “misinformed decision” to join a “frivolous suit.”

“This decision was a slap in the face to your tribal partners … basically not having the tribal consultation or getting educated on this case before making a radical decision,” Deere said. “To think that the Supreme Court would change its ruling just because you don’t like it is ridiculous.”

The roughly dozen peaceful protestors who showed up to support Deere carried signs that read, “Treaties are the highest law of the land … Respect us or expect us,” and “Tribal Leaders. Legal Scholars. Survivors of USA Genocide. Not Fringe Activists.”

Lehr reemphasized the City’s focus on the welfare of its local citizens, both native and non-native, as a key reason for moving forward with the amicus brief.

“The City of Owasso’s primary concern is public safety,” Lehr told the activists. “If that be deemed as nearsighted on this issue, we understand and respect that decision and those beliefs.”

Lehr did, however, apologize to tribal citizens for not initially conveying his staff’s plan to call for the reconsideration of the McGirt case, which he admitted has “many additional ramifications beyond law enforcement.”

Following the Supreme Court’s ruling, Owasso officers have been cross-deputized and act as tribal marshals, transporting defendants to Rogers County Jail or Cherokee Nation District Court in Tahlequah. The new measure — also approved by Owasso Council in October — is among those efforts that will help improve this process, according to Childs.

“One of the challenges that we have had is a place to incarcerate members of the federally recognized tribes,” Childs said in a previous story. “This particular agreement would allow Owasso police officers … to place tribal defendants into the City of Owasso jail.”

Despite the City’s participation in the amicus brief, Lehr commended tribal members for their efforts to establish an effective system under the McGirt ruling.

“We have full faith and confidence in the Cherokee Nation’s ability to develop a comprehensive law enforcement and judicial system that will meet the expectations of all of our citizens for public safety,” Lehr told tribal members at the Nov. 16 meeting.

Year in review: Top 10 news stories that shaped Owasso and Collinsville in 2021

Here’s our year in review of the top 10 news stories that we feel shaped Owasso and Collinsville over the past 52 weeks.

Cherokee Nation councilor Joe Deere (left) stands with a fellow tribal member during Owasso City Council’s Nov. 16 meeting to state his opposition of its recent measure calling for the reconsideration of the Supreme Court’s McGirt ruling.

Owasso City councilors Lyndell Dunn (right) and Alvin Fruga look on while Olivia Gray, a citizen of Osage Nation, speaks to them at its Nov. 16 meeting.