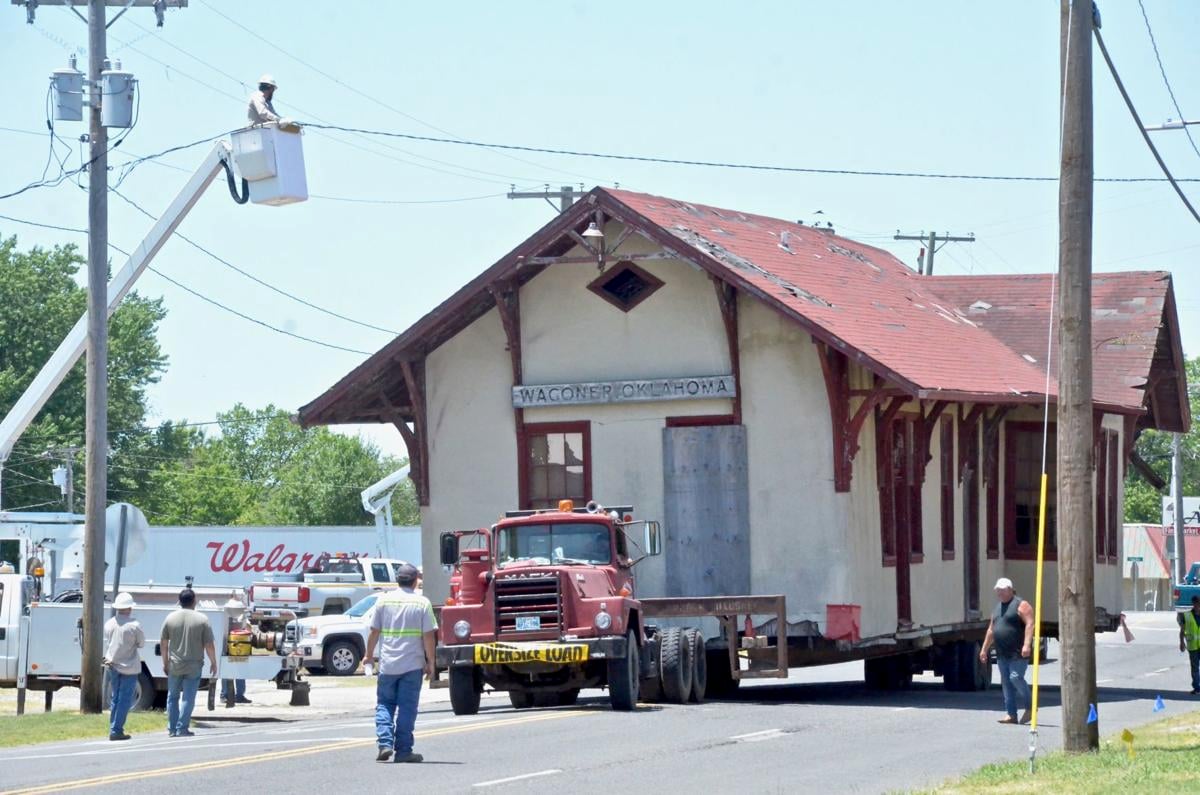 Some kind of cable had to be lifted so one of the halves of the Wagoner Depot could get through to its new downtown home. 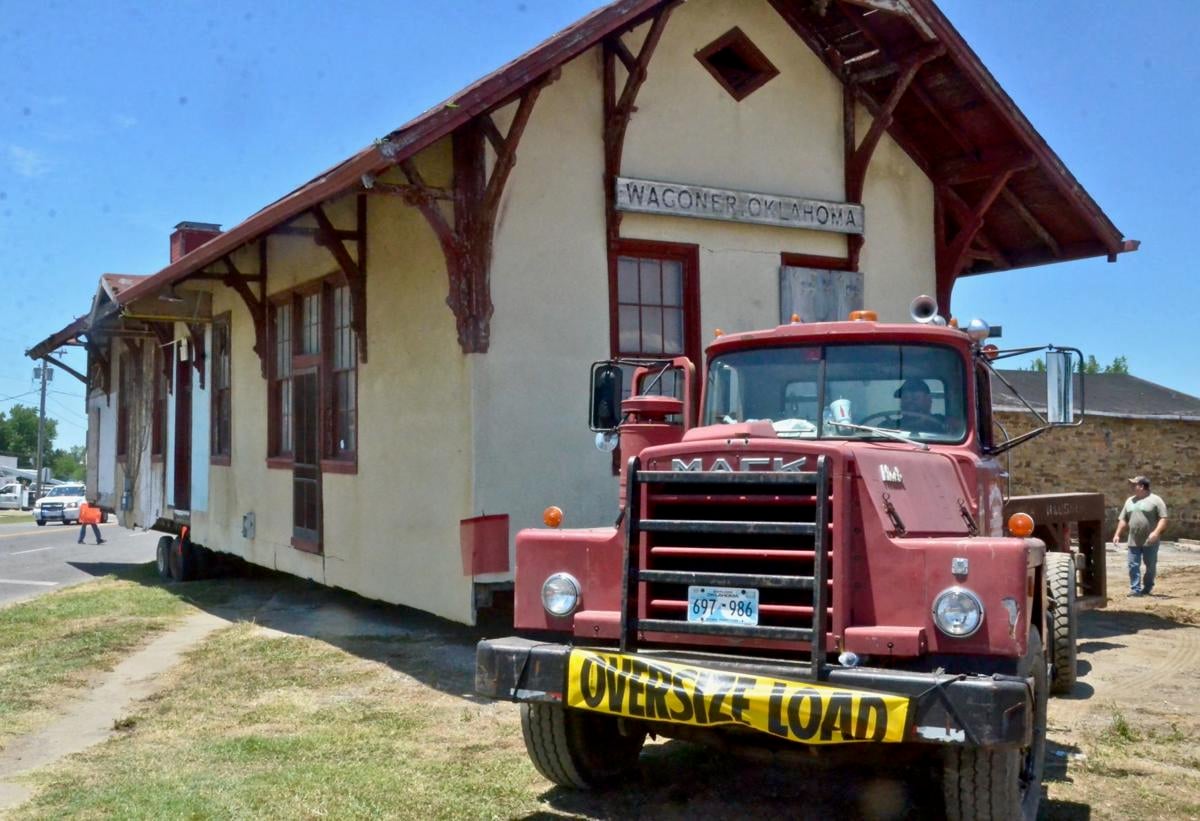 Making a turn was a team effort for depot movers. JOHN FERGUSON/AMERICAN-TRIBUNE

Wagoner’s early founding and railroad history are back in downtown.

Following the move of two halves of the old Katy Depot, Wagoner’s 124-year-old history as the first incorporated city in Indian Territory has found a permanent home in downtown.

The depot joins two railroad cars on Cherokee and Smith streets to form a park celebrating the past.

The June 25 move took longer than expected, but officials managed to overcome every obstacle and delay.

“The same year this depot was built (1896) and our downtown was built off it. This was truly the heart of our city,” said Mayor Albert Jones when the move was completed. “It is so fantastic and I am overwhelmed to bring it back, restore it and share it with the world.”

The University of Oklahoma College of Architecture Master’s program has designed what the finished area will look like. There will be parking on the west side, a green area nearby, the rail cars, depot in the middle and picnic area on the east side.

“We submitted our grant entry and we were selected,” Mayor Jones added. “OU spent the entire semester on this to get this redevelopment plan for this whole area.

“Without OML’s (Oklahoma Municipal League) help, the Oklahoma History Center, Oklahoma Historical Society and Oklahoma Preservation Society, we wouldn’t be able to save this 124-year-old depot.”

Wagoner is one of two cities in Oklahoma to receive this grant. Moore was the other one. The grant allowed Wagoner to save and showcase its past founding.

“This is a historic day in the city of Wagoner, the depot is coming back to town,” Mayor Jones explained. “Made in part by Oklahoma Municipal League grant with the University of Oklahoma college of architecture Master’s degree program.

“As a matter of fact, Wagoner wasn’t Wagoner until this depot was built. On Jan. 4, 1896, by an Act of Congress, we were the first incorporated city in Indian Territory.”

The depot and two rail cars had been located at the corner of Highway 69 and the road to Whitehorn Cove. The depot had been a restaurant for years with the two rail cars as décor items outside.

The move was made possible by the Robin Hausner House Movers company.

Jenni Michelle Bryan, 29, passed away May 31. She joins her father — two-time University of Oklahoma All-American and former NFL player Rick Bryan who had a fatal heart attack in 2013.

Mention the words “burnt pork belly ends” and “smoked mac and cheese” and one knows instantly that the conversation is about Luke’s BBQ, a pop…

Roger Wiley, 62, was walking north on the train tracks near 35th Street East and 80th Street North about a mile northwest of Okay in Wagoner County when a northbound Union Pacific Train pulling 138 cars struck him, state troopers said.

The Oklahoma Department of Transportation and Oklahoma Turnpike Authority are hosting a virtual open house for a proposed State Highway 51 connection. It will be along the Muskogee Turnpike (SH-351) in Wagoner County.

The Oklahoma Department of Public Safety has been the subject of months of complaints from residents who report struggling to get appointments for services such as learner's permits, name changes and REAL ID applications.

A capacity crowd was on hand at the 2021 Coweta Chamber Awards Banquet, where businesses and individuals were honored.

Some kind of cable had to be lifted so one of the halves of the Wagoner Depot could get through to its new downtown home.

Making a turn was a team effort for depot movers. JOHN FERGUSON/AMERICAN-TRIBUNE