Heather Sinkinson (holding plaque) stands with her students as Coweta High School’s Teacher of the Year.

Heather Sinkinson’s job never ends, and she wouldn’t want it any other way.

The Coweta High School math teacher not only conducts geometry, algebra and intermediate math classes, but she’s also dipping her feet at becoming an E-sports coach.

Sinkinson’s students clearly see her involvement and presence, and her peers are seeing her dedication. It’s why as of Nov. 15, Sinkinson is officially the 2021-2022 Coweta High School Teacher of the Year.

“I thought it was a dream,” Sinkinson said.

Sinkinson was also shocked, knowing she was tied in the first voting go-around, to whom she could only describe as another “amazing” teacher.

It was on Tuesday, Nov. 16, when administrative staff came into her classroom at second hour, and handed her a plaque recognizing her as Coweta High School’s Teacher of the Year.

“I’m so lucky to have colleagues that would vote for me,” Sinkinson said.

It isn’t an easy feat to become Coweta High School Teacher of the Year. First, eligible teachers have to meet a certain criteria, such as being with the Coweta Public Schools district for three years. Then, it all comes down to peer votes — who is the best person to represent Coweta High School?

If Sinkinson gets extra lucky, she may have a shot at representing Coweta Public Schools at the state level in the near future. Shelley Self, an art teacher in Coweta, is currently in the running for Oklahoma Teacher of the Year.

If you were to ask Sinkinson if teaching was something she wanted to do her whole life, she’d respond: teaching chose me.

Her teaching career began in Special Education, when she was in a peer tutoring program in high school. She worked as an assistant in the special needs resource room.

She eventually gravitated to Union Public Schools as a Special Education teacher. Sinkinson was a teacher at Union for four years, while also working on her master’s degree in education with an emphasis on math.

Even as a Special Education teacher, Sinkinson always emphasized math in the classroom.

“I felt more propelled and called to work in math, rather than just a general education teacher,” she said. “I felt like I’d make more of a difference.”

Now, Sinkinson is going on her fourth year as a teacher in Coweta. Although she transitioned from a district enrollment of 15,700 students at Union, compared to 3400 students at Coweta, she believes it was for the better.

“Coweta is a great place to work with a sense of community,” she said.

It won’t be uncommon for students to go up to Sinkinson at the local Walmart and say, “Hey Ms. Sink! I didn’t know you shopped at this Walmart!”

That community style, she feels, is also in the school building.

“Even in the math department, all of us are checking in on one another to make sure we’re okay. It’s a great atmosphere.”

One hundred and seventy five turkeys and pumpkin pies later — the Thanksgiving food giveaway at Coweta Assembly was clearly a tasty success.

Drive by Coweta Assembly at 11 a.m. Thursday, and you’d see 145 cars in line, wrapped around the entirety of the building. That’s when the giveaway started, but don’t be fooled. There were 75 cars in line at 10 a.m. and 30 at 9 a.m. There were even some cars in line before then.

“We never had a giveaway last longer than an hour,” said Pastor Cody Joiner. This giveaway ended at 11:40 a.m.

Joiner, and the rest of the Coweta Assembly Staff, wouldn’t want it any other way — knowing community members will have Thanksgiving foods to share with their families. 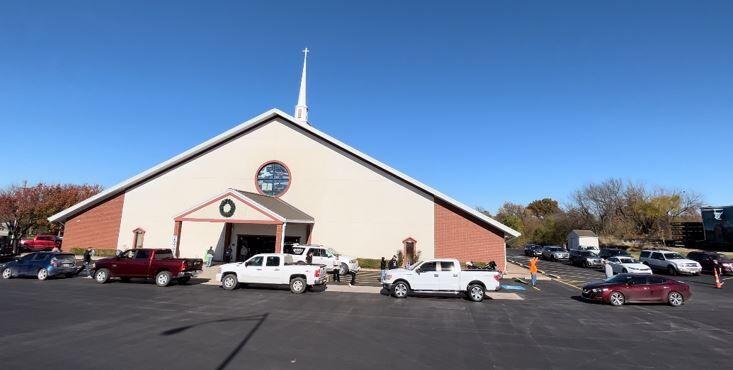 175 turkeys and pumpkin pies were handed out.

No matter what they do, they will always strive to buy local. For instance, all of the turkeys and pies for the Thanksgiving giveaway were bought at the Country Mart grocery store in Coweta, off OK-51. When they handed out large hams and sweet potatoes to families last Christmas, it was all purchased at the Coweta Walmart.

Coweta Assembly staff tries to do a monthly food giveaway if the funds and time are aligned, Joiner said. No matter how many outreaches they do, the group never fails to help between 150 and 200 people.

“We love being a part of the community,” Joiner said. “We want to give back any way we can.”

They’ll even work with other parishes, such as Claremore First Assembly, and pick up food delivered to them, and bring it back to Coweta. For example, Coweta Assembly crews rented a U-Haul last year, drove out to Claremore, and came back with six pallets worth of food to hand out to Coweta residents around the holidays.

Coweta Assembly staff would like to invite anyone looking for a church home to join them on Sunday mornings at 9 a.m. or 10:45 a.m. They have services for all ages. 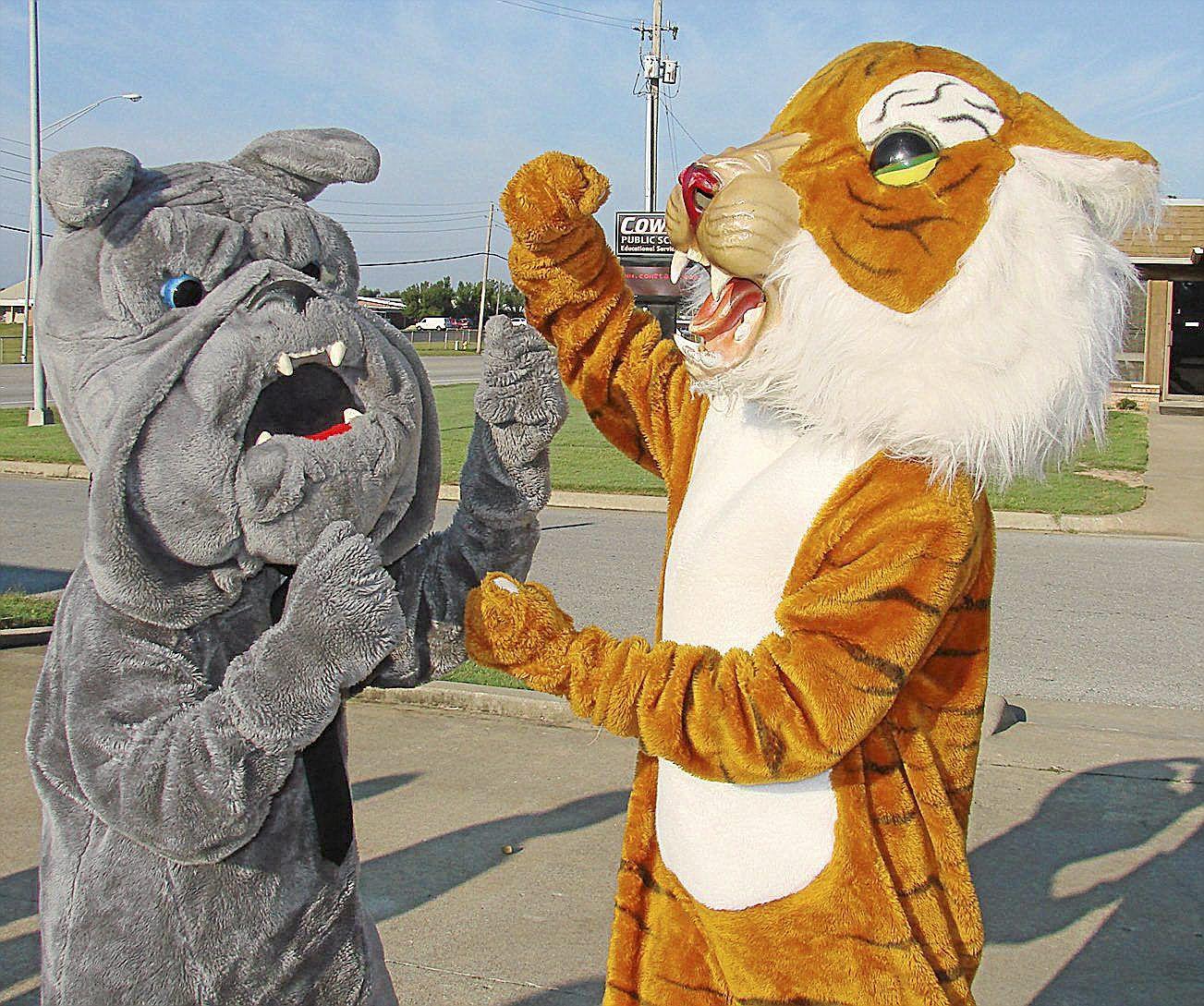 The Coweta Tiger and Wagoner Bulldog mascots are ready to rumble before Friday’s classic football matchup between the cross-county rivals on the gridiron. A Rivalry Bash at Tiger Field Thursday night will get fans in the bedlam spirit before the Tigers and Bulldogs square off for bragging rights and a season opening win. CHRISTY WHEELAND/COWETA AMERICAN 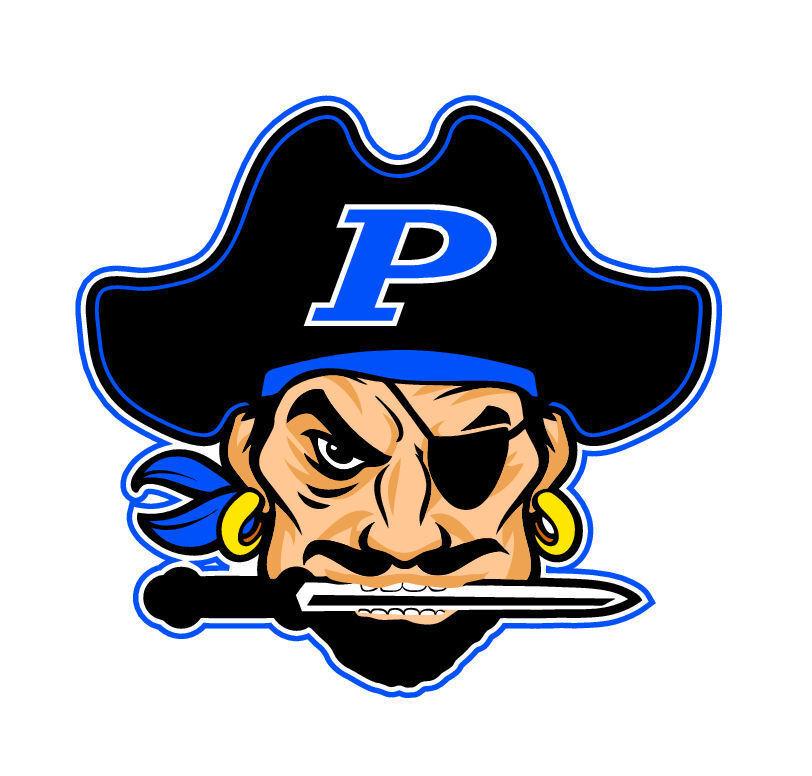 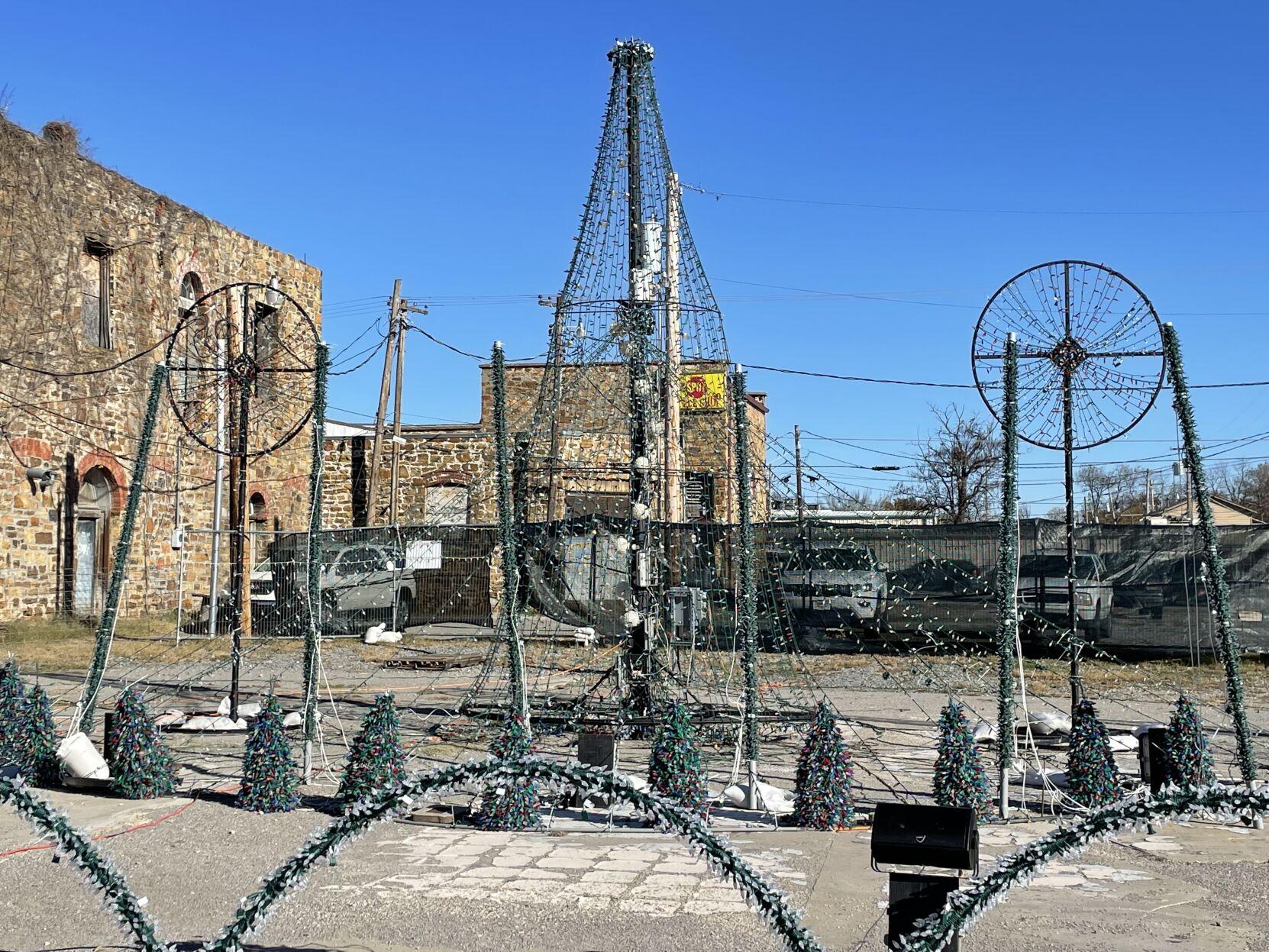 The City of Coweta is officially home to a new Metropolitan Environmental Trust, or M.E.T. Center, and a facility in Wagoner is on its way.

M.E.T. Executive Director Bobby Schultz said the Coweta M.E.T. Center, on 14762 S. 298th East Ave., has been fully-operational since September. Their old location, at 11160 S 265th E. Ave., was a leased building, and the land owner did not want to renew, Schultz said.

The new Coweta M.E.T. Center is very close to Coweta High School, and it’s in a much better location, Schultz said.

“When people get familiar with where it is, they’re going to realize it’s in a very, easy location. It’s practically throwing distance from the high school,” he said.

Schultz also mentioned that a M.E.T center will hopefully open in Wagoner by the start of 2022. There is an area behind AutoZone, near OK-51 and Polk Ave., which the city is acquiring.

“They’re going to clear that area out and get it set up. They’re hoping to do that really quickly,” Schultz said.

The old Coweta location was in city limits, but it was behind another building by an auto repair facility, and it made it slightly difficult to get in and out, Schultz said. The new location has a road drivers can go down, and a cul-de-sac to enter and exit.

Schultz said more and more people are realizing where it’s located, and he expects it to pick up even more.

Another facet that makes the M.E.T unique: All M.E.T workers are adults with developmental disabilities.

“It’s a good worthwhile job for them. It gives them something to do and gives them a sense of accomplishment,” Schultz said. “They do a great job. Some of them have been working at our locations for 10 or 15 years.”

It’s open from 9 a.m. to 2 p.m., seven days a week. The facility is not manned 24-7, but anyone can drop off recyclables after-hours for workers to sort out.