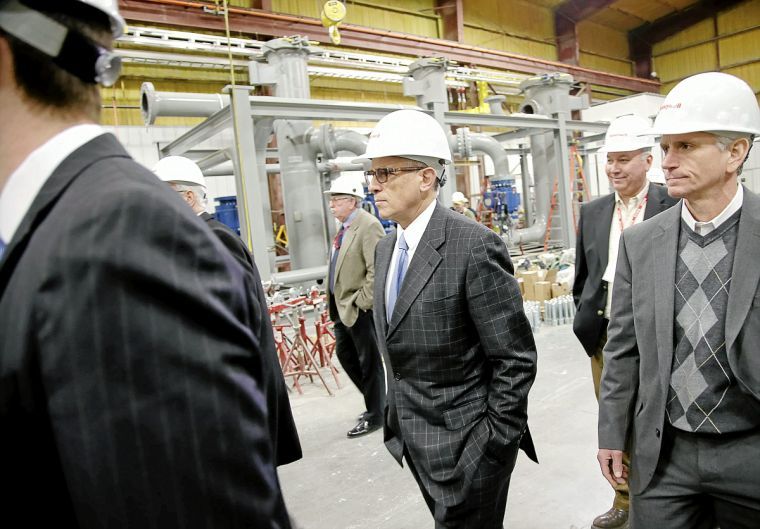 Fred Hochberg (center), chairman of the Export-Import Bank, tours Honeywell International's plant at the Tulsa Port of Catoosa with a group of people including Clay Bird, (right) director of the Mayor’s Office of Economic Development, during a tour Friday. JOHN CLANTON/Tulsa World 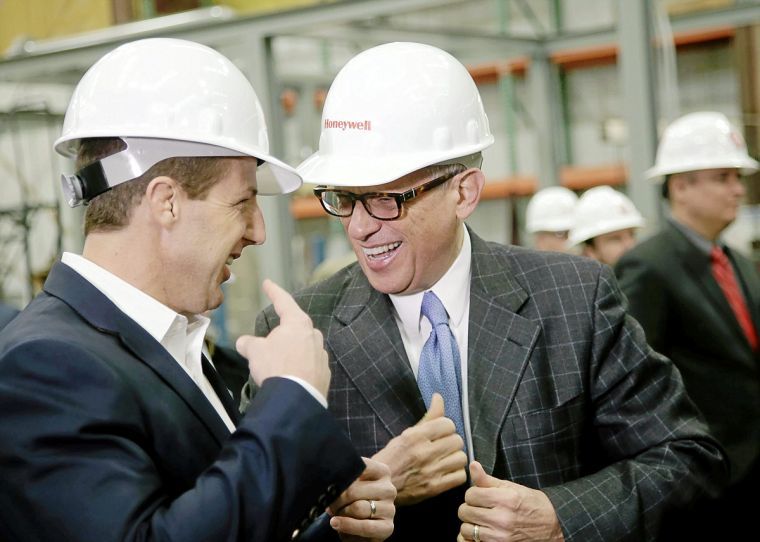 U.S. Rep. Markwayne Mullin (left) talks with Fred Hochberg, chairman of the Export-Import Bank, during an event at Honeywell International's plant at the Tulsa Port of Catoosa on Friday. JOHN CLANTON/Tulsa World

CATOOSA — The Export-Import Bank is one of those federal agencies that most Americans neither know nor care much about — but the few who do care, care intensely.

A fairly high-powered contingent of the intensely interested met at the Tulsa Port of Catoosa on Friday to make a case for the so-called Ex-Im, whose charter runs out June 30.

There is some doubt it will be renewed because the relevant legislation must pass through the House Financial Services Committee, and the chairman of that committee, Jeb Hensarling of Texas, wants the Ex-Im closed.

“Sometimes it is not enough just to have the best technology,” said Rajeev Gautam, UOP’s president and CEO. “Our competitors from places like Korea and China … bring financing with them from their export credit agencies.”

The Ex-Im is a sort of bank of last resort for American businesses engaged in international trade. It finances working capital and provides loan guarantees and credit insurance for projects that private sources won’t consider, usually because of high risks due to political, social or economic instability.

Chartered in 1934, the bank receives no tax revenue, and actually paid $675 million into the U.S. Treasury last fiscal year.

Opponents such as Hensarling, though, say the bank benefits a relatively small number of businesses, some of which are among the nation’s largest corporations, and that the federal government should not be in the international banking business anyway.

Many Port of Catoosa and area manufacturers, including Honeywell, are Ex-Im clients; officials from several of them said Friday that their companies could not continue to grow without the bank.

Mullin, whose district includes the port and the entire Oklahoma portion of the McClellan-Kerr Arkansas River Navigation System, has been a strong supporter of the Ex-Im Bank. So has Third District Congressman Frank Lucas, who is a member of the Financial Services Committee, which must approve the agency’s charter renewal.

Lucas and First District Congressman Jim Bridenstine, who has remained noncommittal on re-chartering, were to attend Friday’s meeting, as was Gov. Mary Fallin.

Fallin, however, canceled because of a family emergency, and Lucas and Bridenstine were sidetracked by travel delays.

“What we have here in Ex-Im Bank is a program that actually works,” Mullin said. “You have 125 companies from across Oklahoma that have been supported by Ex-Im Bank since 2007. Eighty-four of them are small business owners just like me.

“Ex-Im bank fills in a niche the private sector cannot.”

Fred Hochberg (center), chairman of the Export-Import Bank, tours Honeywell International's plant at the Tulsa Port of Catoosa with a group of people including Clay Bird, (right) director of the Mayor’s Office of Economic Development, during a tour Friday. JOHN CLANTON/Tulsa World

U.S. Rep. Markwayne Mullin (left) talks with Fred Hochberg, chairman of the Export-Import Bank, during an event at Honeywell International's plant at the Tulsa Port of Catoosa on Friday. JOHN CLANTON/Tulsa World