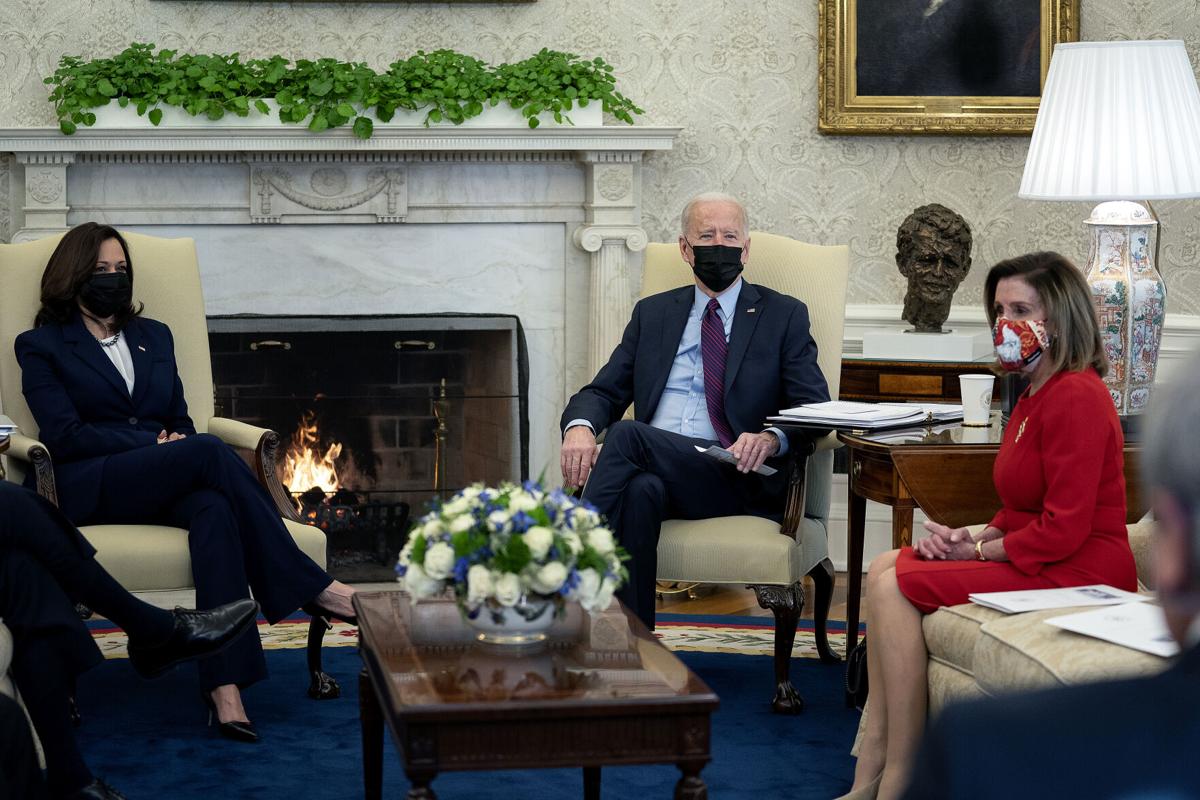 U.S. President Joe Biden, center, and Vice President Kamala Harris, left, meet with House Democratic leaders, including Speaker of the House Nancy Pelosi, D-Calif., and committee chairs to discuss the coronavirus relief legislation in the Oval Office at the White House on Feb. 5, 2021, in Washington, D.C. 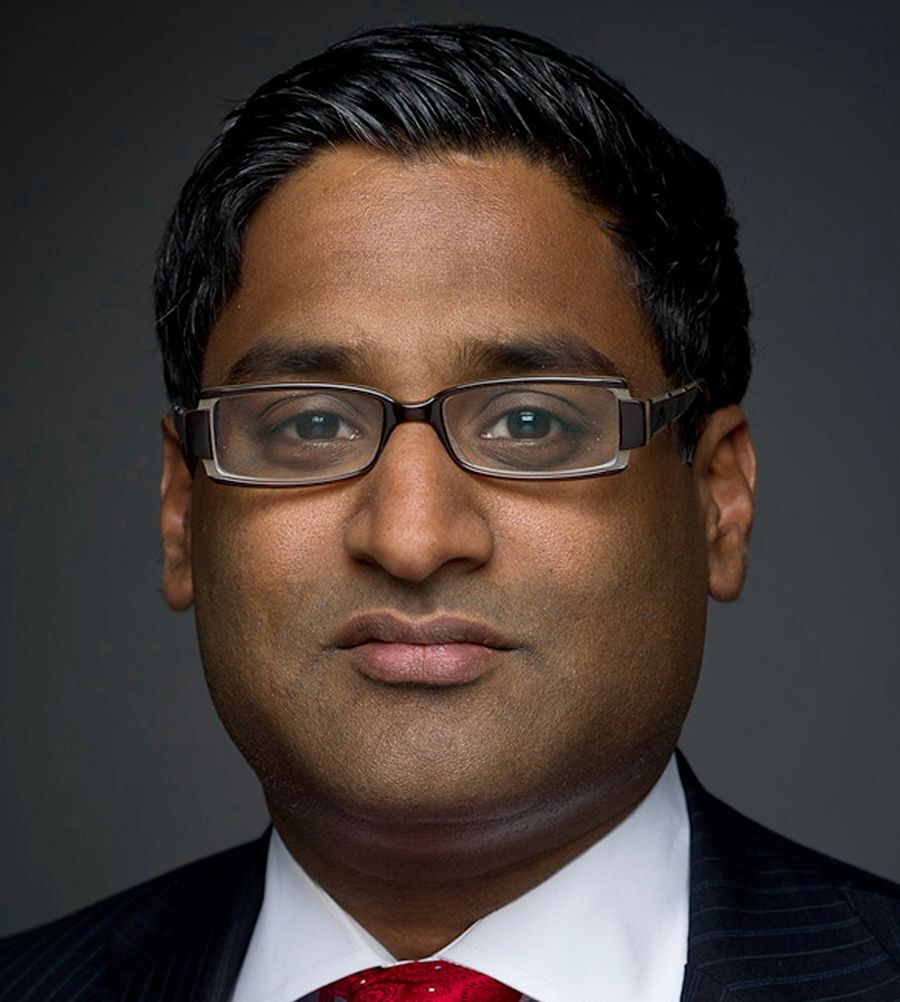 “I came in expressing a strong spirit of bipartisanship,” President Barack Obama said, “and what was clear was that even in the midst of crisis, there were those who made decisions based on a quick political calculus rather than on what the country needed.”

At the start of 2010, his second year in office, Obama was remembering what he called “the classic example” of Republican intransigence from his first year: He went to share ideas with House Republicans about the stimulus bill, only to find out that their leader, John Boehner, had already issued a statement opposing it.

During the Obama years, Democrats cited incidents like this one to cast Republicans in a bad light. Obama and several other Democrats also complained bitterly that Senate Republican leader Mitch McConnell had announced at the start of his first term that his top priority was preventing a second one. Democrats said they tried again and again to meet Republicans halfway on health care, too, and were rebuffed.

With President Joe Biden in the White House, Democrats are saying that the Republicans’ behavior then justifies ignoring them now: There’s no point wasting time trying to negotiate with them.

The incidents didn’t actually happen, though, or at least didn’t happen the way Obama related them. Before he met with House Republicans in January 2009, House Democrats had already introduced a stimulus bill without any of their input, and Republicans had already made public statements of opposition. In his meeting with the Republicans, Obama reportedly said he was open to changing the bill; the Republicans then voted against the unchanged bill; and Boehner issued a statement saying he would still like to work with Obama on the issue.

McConnell’s remark, meanwhile, was made well into Obama’s term, right before the midterm elections of 2010. He said in the same breath that he would work with Obama if he moderated the way the previous Democratic president, Bill Clinton, had: “I don’t want the president to fail; I want him to change.”

He reiterated the message after the election: While he hoped Obama would cooperate on Republicans’ legislative goals, achieving them would probably require that he lose reelection. It was a statement of the obvious, which didn’t stop Nancy Pelosi from bringing it up eight years later to call it “racist.”

Democrats also overstate how hard they tried to work with Republicans on health care 10 years ago. They are right to note that their bill, the Affordable Care Act, included ideas some Republicans had earlier favored, such as the individual mandate that Mitt Romney had signed into law when he was governor of Massachusetts. But it also included items they had never shown much support for: It has been decades, for example, since any congressional Republican has voted for tax increases on the scale the bill required.

The Obama administration made a significant concession by dropping the public option from the legislation. But it had to make that move to win sufficient support from Democrats. And it refused to make other adjustments. Adding malpractice reform to the bill, for example, would not have changed any of its basic features while making it more palatable for Republicans. The Obama White House rejected the idea for fear of offending trial lawyers.

Even leaving aside the actual history of the first Obama term, there’s something strange about Democrats’ reaching back to it to justify their behavior now. There are more recent and relevant precedents.

Republicans and Democrats worked together to pass a large COVID-relief bill last spring, and did it again just a few weeks ago. The second one was passed after Biden had won the election and the Electoral College had met. Republicans knew that any positive effect it had would buoy Biden politically, and did it anyway.

There’s no moral or constitutional obligation for Democrats to bargain with the Republicans. Obama came into office with large Democratic majorities in Congress, and had the votes he needed to pass the stimulus and his health care bill without Republicans.

Maybe they will have the votes they need in Congress this time, too. It would be nice, though, if they would stop pretending that they have no other choice.

Opinion: Should the U.S. stay in Afghanistan, leave it or do something else?

On paper, the United States is committed to withdrawing its last 2,500 troops from Afghanistan less than 10 weeks from now, on May 1, the column says.

QAnon is such a weird theory that it’s tempting to think humanity is getting dumber. But it’s better seen as a highly sophisticated way of manipulating people, the column says.

Opinion: What can you do about the Trumpites next door?

Oh, heck no. The Trumpites next door to our pandemic getaway, who seem as devoted to the ex-president as you can get without being Q fans, just plowed our driveway without being asked and did a great job, the column says.

Although federalism still has some benefits, its obsolescence is increasingly obvious when the U.S. faces crises that, like climate change and COVID-19, don’t respect state boundaries, the column says.

Opinion: How will the refusal of GOP senators to convict Trump look to future voters?

It always seemed unlikely that Sen. Mitch McConnell of Kentucky, the Senate Republican leader, would vote to convict the disgraced ex-president who, even from exile in Mar-a-Lago, holds sway over most of his party.

Faye Flam: The coronavirus may not be able to mutate beyond control

New research suggests that there may be limits to how many evolutionary tricks the coronavirus has up its sleeve, the column says.

Opinion: Sure, I'd walk 6 miles to get that COVID-19 vaccine

My car was smothered in snow when I woke up Tuesday, the streets were drowning in slush, and when I glanced out my living room window, I instantly knew that my little Prius may as well have been stuck in cement. “Why, oh why,” I cried to the weather gods, “would you make this happen on this day, of all days?” the column says.

Opinion: What if Biden can’t deliver for his party’s left wing?

The Democratic coalition will come under more stress the closer we get to the midterm elections, when the party in the White House typically loses ground in Congress, the column says. That historical pattern will make Democrats more cautious in places that went for Trump in 2020. But it will make progressives more impatient, since it means this Congress could be their last chance for a while to achieve their priorities.

Opinion: Trying to get a COVID-19 vaccine is like playing roulette

Welcome, everybody, to vaccine roulette! It’s a crazy, new game that requires great endurance, an epic tolerance for failure and, above all, luck.

U.S. President Joe Biden, center, and Vice President Kamala Harris, left, meet with House Democratic leaders, including Speaker of the House Nancy Pelosi, D-Calif., and committee chairs to discuss the coronavirus relief legislation in the Oval Office at the White House on Feb. 5, 2021, in Washington, D.C.