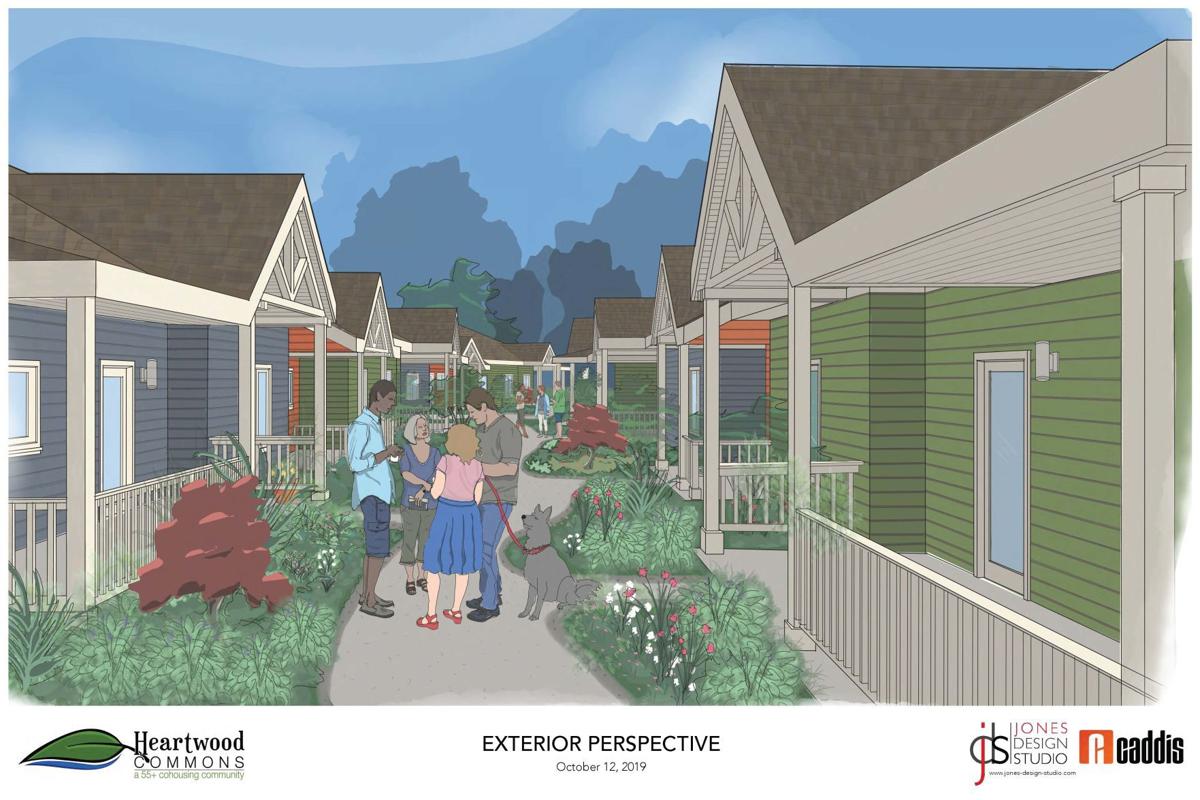 A rendering of Tulsa’s first cohousing development is shown. Designed for the 55-and-older crowd, it is scheduled to contain 32 residences, a common house, walking trails and other amenities. 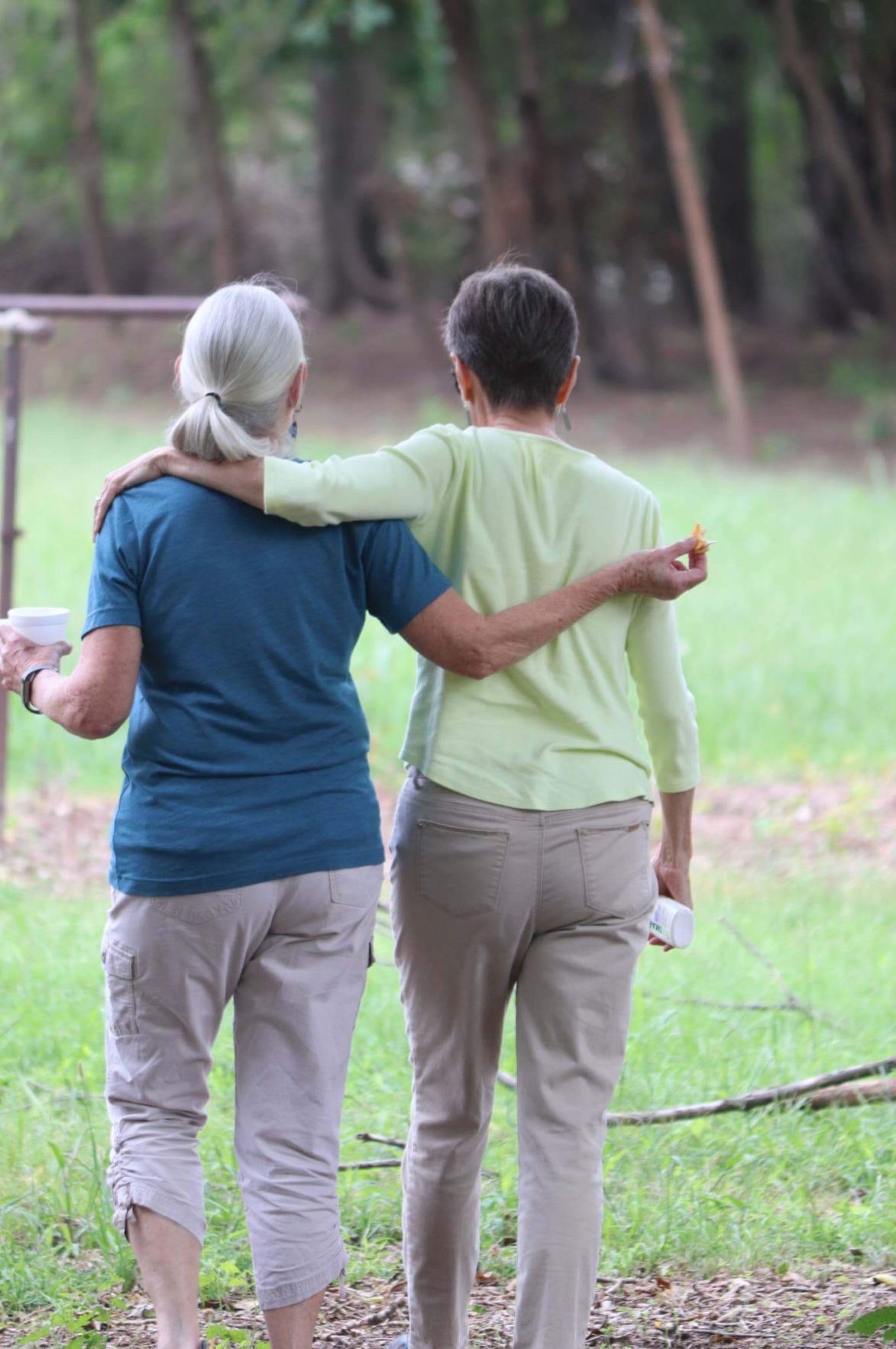 Claudia Vandiver, left, and Jan Owen, who plan to live in Heartwood Commons, walk on the land where the cohousing development is scheduled to be built, 7141 S. Quincy Ave. Courtesy

When it comes to aging, Suzy Sharp believes connectivity is every bit as important as activity.

That is why Sharp, who grew up two blocks from where she lives in Florence Park, views cohousing as her most appealing option.

“I sold Girl Scout cookies to every house in that neighborhood,” she says. “But as I grow older, I know that house isn’t going to support me. It has stairs. I know my neighbors, but I don’t know them well.”

Heartwood Commons is her and others’ version of nirvana, a pocket neighborhood an intentional community on about five acres about a block from the Arkansas River at 7141 S. Quincy Ave. In Tulsa’s first cohousing development will be a series of buildings containing three and four residences — 32 units total — ranging from 750 to 1,500 square feet.

Residences will start at $250,000 and provide owners equity in the entire property, Sharp says. Thus far, about 15 people have committed to the project, which is expected to get out of the ground in the spring.

“This is different because this is being created by us for us,” Sharp says. “It’s not an outside developer coming in and saying, ‘You like this, don’t you?’ We’ve all been involved in the design process. We’ve all had our input into the layouts of the home and what the common house is going to look like, even down to how it’s going to function and do for us.

“With other retirement communities, you can get amenities. You can get a fancy place to stay. But it doesn’t guarantee you that you’re going to have people that have your back and people you can turn to from everything from conversation to whatever the future may hold. The folks that age most successfully are the ones that stay engaged in life and stay connected. It’s harder and harder, especially as you get older, to maintain those connections, to replace those who get lost.”

A 2,800-square-foot common house will include a gourmet kitchen, living and dining rooms, and two guest rooms. Walking paths are planned, as well as a woodshop, dog park and contemplative space.

Some of the corner complexes will have wrap-around porches with butt-height railings to make sitting convenient and induce interaction.

“In your typical neighborhood, you have your house, your garage,” says John Orsulak, 64, a future Heartwood Commons resident and retired fifth-grade teacher in Jenks Public Schools. “Most people, nowadays, put the garage door up, drive in, garage door down, go in, never seen the neighbors.

“Maybe they get the mail and might wave. With ours, the parking is on the periphery and you walk to your home. You walk past your neighbors. You have the opportunity for interaction. You have exercise. It’s more conducive to a healthier lifestyle.”

The first cohousing neighborhood model was developed in Denmark in the 1970s. About 170 cohousing communities have sprung up across the United States, including one in Stillwater.

“That was one of the draws of Stillwater,” says Debby Baker, 68. “They brought people in from all over the country. They are less expensive, as well, because it’s less expensive to live Oklahoma than California or Seattle or New York.”

Baker envisioned living in senior apartments, she says. Then, the complex she was eyeing was purchased and rents doubled.

“All of a sudden, I thought, I need more control over my life than that,” she says.

Jan Owen, 67, had planned to lean on family when she aged. But in the past few years, one of her sons committed suicide and the other died of a brain tumor.

“I no longer have that option,” she says. “I don’t have any other close family that could take me in if I needed something. So these people are my family. I’m really, really invested in this.”

Eighty percent of the units in Heartwood Commons (heartwoodcommonstulsa.com) is mandated to have at least one resident who is at least 55-years-old, the other 20% is not age-designated. Heading the design process for the facility are Molly Jones of Tulsa-based Jones Design Studio and experienced cohousing architect Bryan Bowen of Boulder, Colorado-based Caddis Collaborative.

“What I’ve basically discovered is that I’m basically an introvert,” Owen says. “If I want to stay in my home and I don’t want to go out anywhere, that will be what I do until the day I die unless I live in a place where the community is important to me and I want to be out in it.

“So this is going to be sort of my insurance from being a crusty old lady in the house.”

DoubleTree by Hilton downtown sells for about $21 million

The hotel at 616 W. Seventh St., will remain branded as a Hilton.

Korean food, sushi to be offered at new restaurant downtown

SoBahn 82 is scheduled to open at end of September.

Kim Komando: Can cellphones cause cancer? 5 steps to minimize the risk

Over the years, there have been many different studies about the potential health impacts of cellphone radiation, from the earliest models to the latest 5G handsets, with mixed results.

5 mortgage trends to watch for the rest of 2021

Here are housing trends to watch for in the final months of the year. Also, check out more of the week's best money reads from the experts.

A rendering of Tulsa’s first cohousing development is shown. Designed for the 55-and-older crowd, it is scheduled to contain 32 residences, a common house, walking trails and other amenities.

Claudia Vandiver, left, and Jan Owen, who plan to live in Heartwood Commons, walk on the land where the cohousing development is scheduled to be built, 7141 S. Quincy Ave. Courtesy