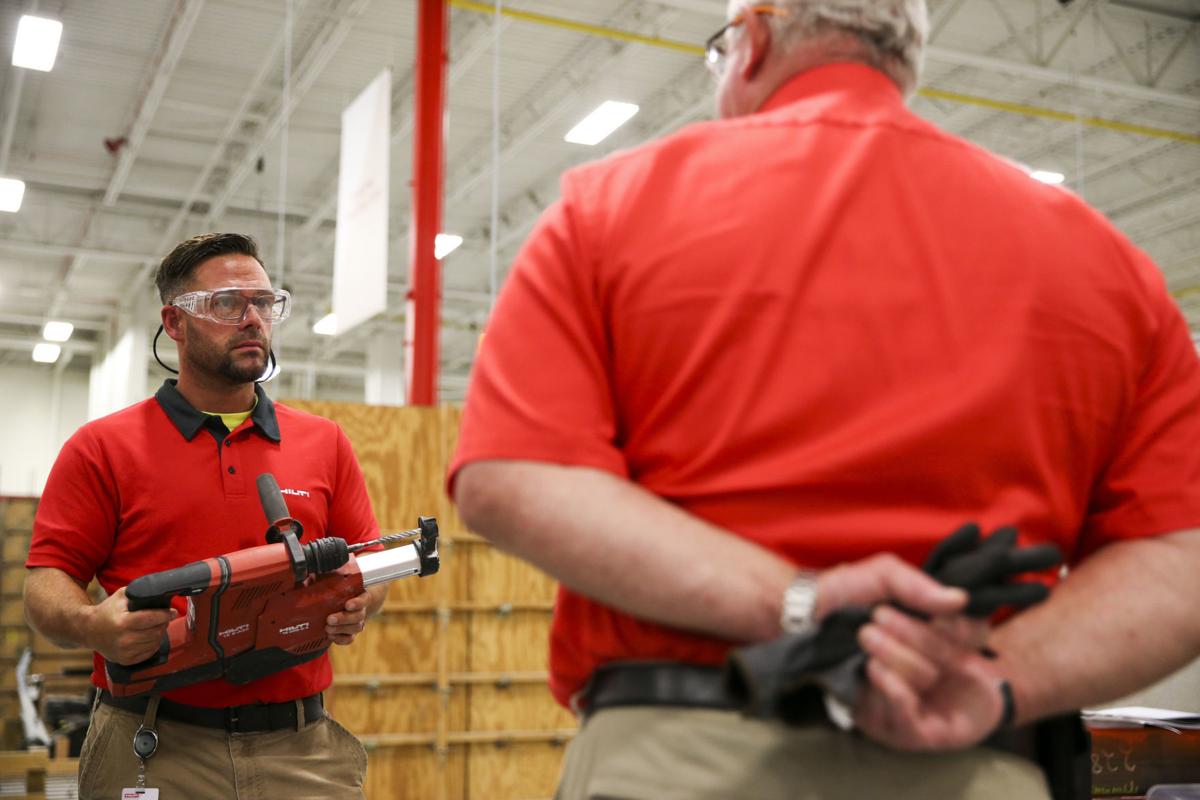 Nicolas Diamond shows off a tool during a demonstration for trainees at Hilti’s facility in Tulsa on Wednesday. The company has been in Tulsa 40 years. IAN MAULE/Tulsa World 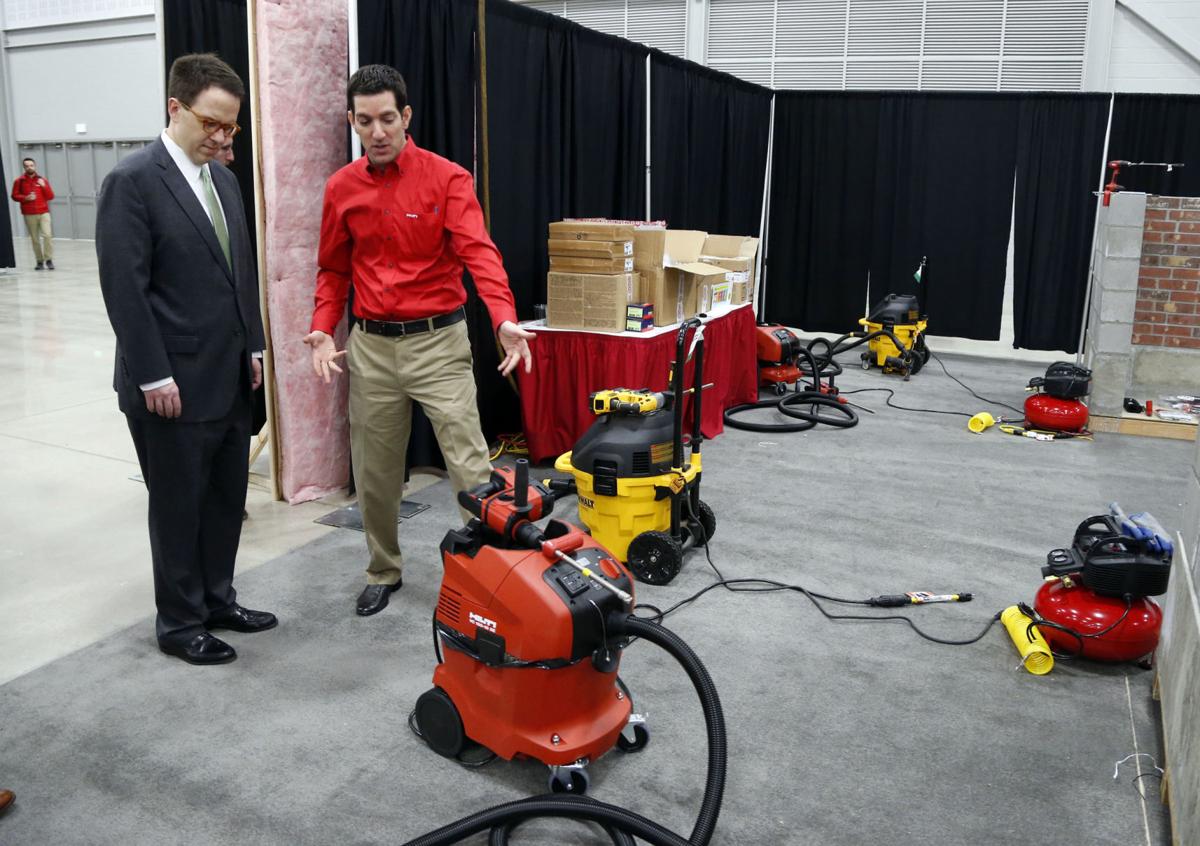 Hilti’s North American President Avi Kahn (right) shows Tulsa Mayor G.T. Bynum a jackhammer attached to a vacuum cleaner during a demonstration at Hilti in Tulsa in 2018. The company has been in Tulsa 40 years. STEPHEN PINGRY/Tulsa World file 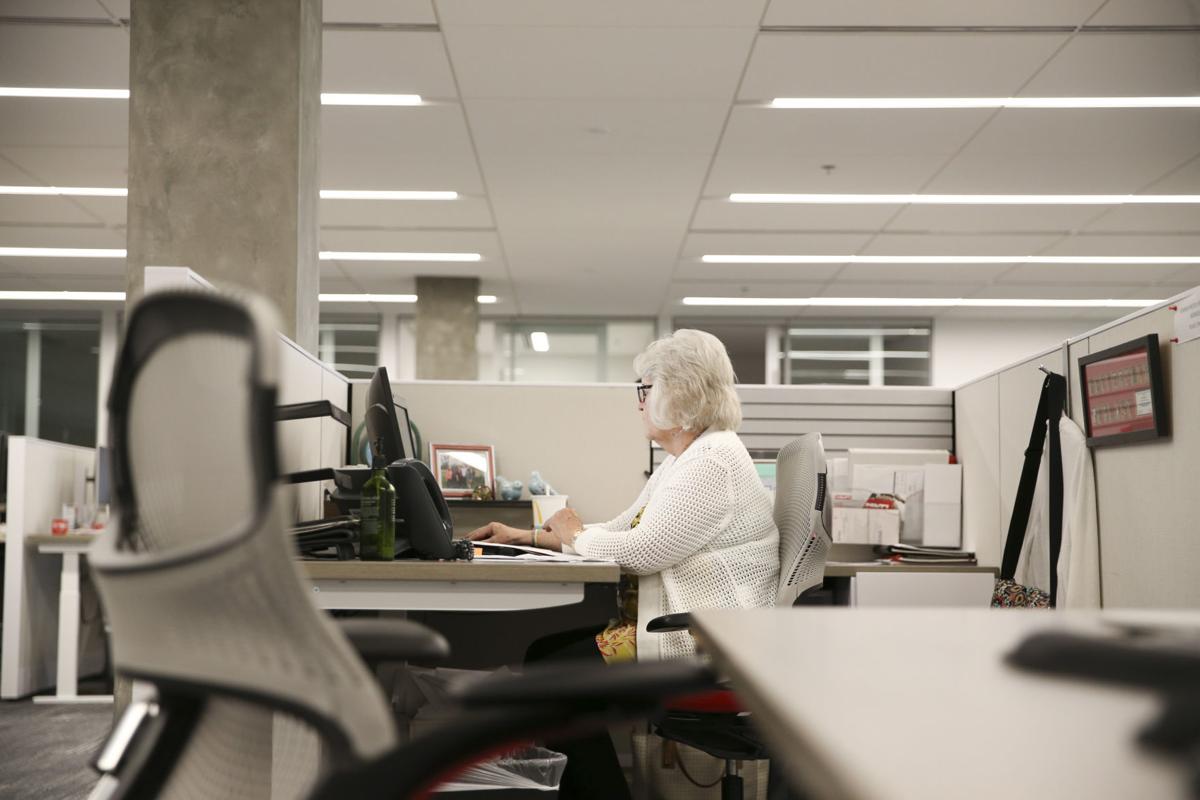 Nicolas Diamond shows off a tool during a demonstration for trainees at Hilti’s facility in Tulsa on Wednesday. The company has been in Tulsa 40 years. IAN MAULE/Tulsa World

Hilti’s North American President Avi Kahn (right) shows Tulsa Mayor G.T. Bynum a jackhammer attached to a vacuum cleaner during a demonstration at Hilti in Tulsa in 2018. The company has been in Tulsa 40 years. STEPHEN PINGRY/Tulsa World file

With more than 29,000 employees in 120 countries, Hilti has a global presence.

But its nerve center resides in Oklahoma.

In terms of the number of employees (525), Tulsa is the company’s third-largest location in the world and the largest in North America, said Avi Kahn, president and CEO of Hilti North America.

“Within North America, it’s really the heart of the organization, because all of our business operations run through Tulsa,” Kahn said by phone. “… It’s a critical location for us.”

And it has been for decades.

Hilti is celebrating its 40th year in Tulsa. Founded in 1941, the Liechtenstein-based toolmaker opened its North American headquarters in Tulsa in 1979, moving from Stamford, Connecticut, the firm’s initial location when it entered the United States market in 1955.

Although Hilti moved the headquarters from Tulsa to the Dallas Metroplex in 2015, plenty of work remains in Oklahoma.

Companywide, Hilti every month hires about 100 people, the vast majority in field roles, Kahn said. All new team members matriculate for about a month at Hilti’s 28,000-square-foot Tulsa training center, which was renovated four years ago, he said.

“They kind of become part of the community,” Kahn said. “They spend the weekends. They go out. They go to restaurants.

“There’s a good likelihood that we may ask them later on in their career to relocate to Tulsa. It’s great that they get a taste of it up front and understand the benefits and what Tulsa offers.”

In 2018, Hilti’s employee training program was linked to 4,500 flights that came in and out of Tulsa International Airport.

“When you are hired into the Hilti organization, we bring you to Tulsa, Oklahoma, to indoctrinate you, so to speak, to our company culture,” said Karl Neumaier, chief operations officer for Hilti North America. “We encourage people to get out in the community and experience Tulsa as a community while they are here.”

Christy Ouverson started work at Hilti in Tulsa while she was still in college. Director of talent management, she has held 17 job titles within the organization in her 31 years.

“I remember starting when the manufacturing plant was based here in Tulsa, and I have moved personally all throughout the building,” she said. “They are just a great employer. The tenure that we have in the company speaks to the fact that people choose to be here and work here and really have a career.”

Kahn said Hilti has evolved from a product supplier in the construction industry to a supplier of construction services and software.

“The main way we’re looking to develop in the coming years is to be part of that technology shift in construction where contractors are looking for ways to overcome labor shortages to be more productive, to be safer,” he said. “We believe we can be a big part of that.”

Added Neumaier, “A couple of years ago, we made the decision to move the headquarters …, but most importantly, we decided to keep our operations here in Tulsa. We believe that Tulsa provides the right environment for us to be able to continue to invest in that operations center.

“We’ve been investing in it over the last couple of years in order to bring it up to standards that will be good over the next 10 to 15 years. Why not another 40? The simple reason is that we think people’s tastes in interior decorating for offices will change by then, so we will do it again.”