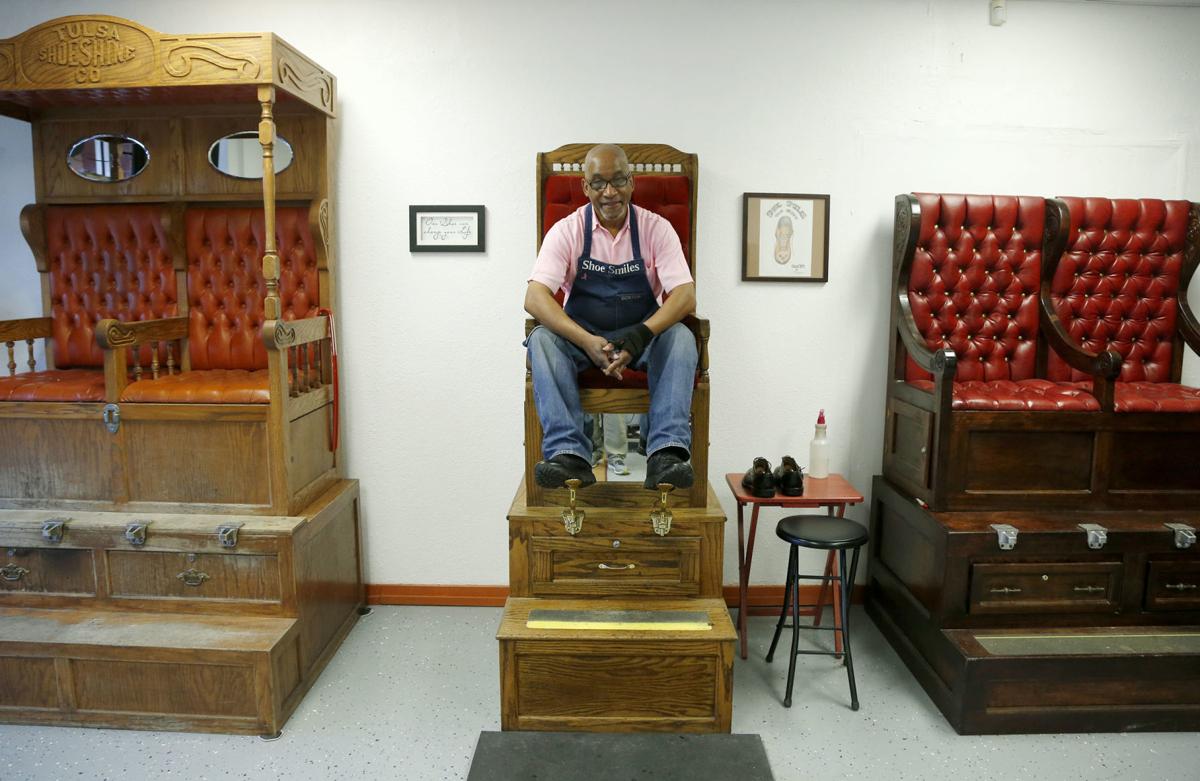 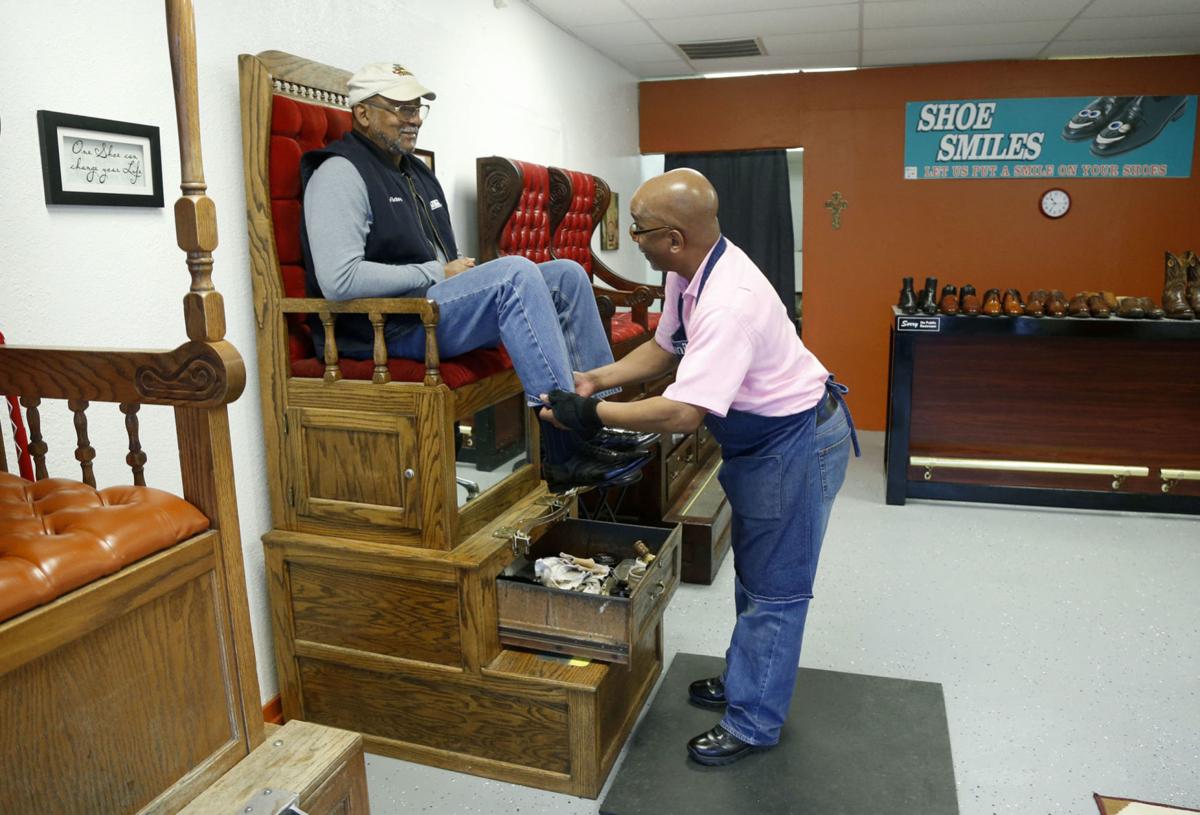 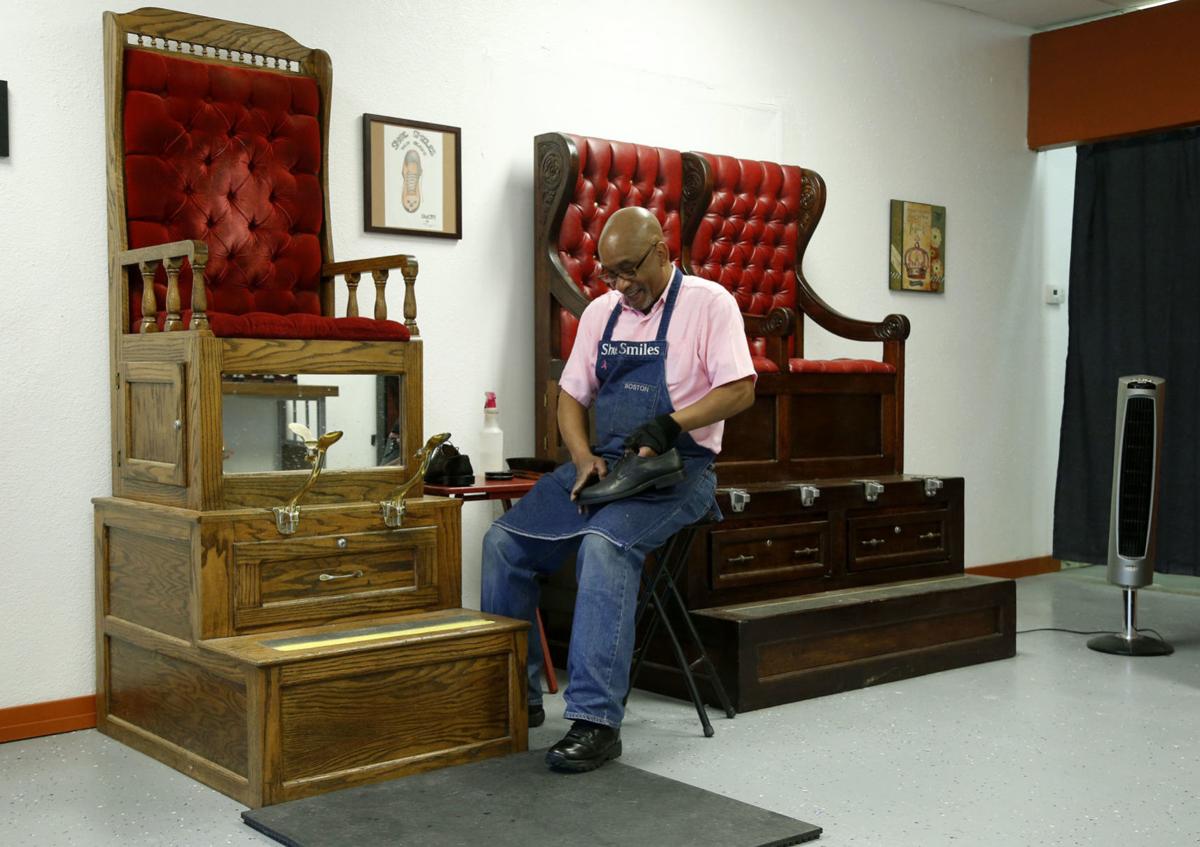 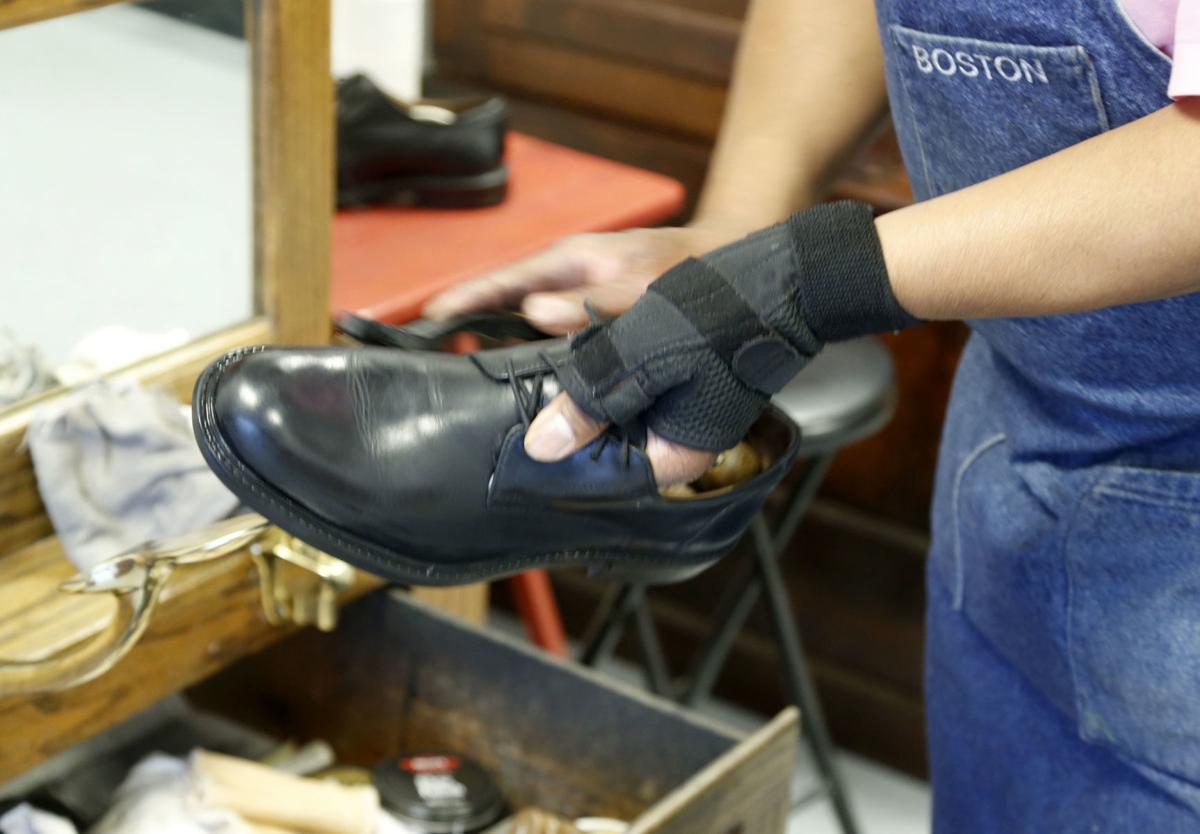 Boston Torrence, shown shining shoes at his new shop on Admiral Place, says the key to a good shine is a thorough scrubbing. STEPHEN PINGRY/Tulsa World

Boston Torrence, shown shining shoes at his new shop on Admiral Place, says the key to a good shine is a thorough scrubbing. STEPHEN PINGRY/Tulsa World

For more than 26 years at Tulsa International Airport, the livelihood of shoeshiner Boston Torrence walked by him daily, potential patrons in the thousands.

Today, that flow is a trickle.

“I still wonder if I did the right thing,” he says.

Torrence, 61, recently traded his captive clientele for his own shingle at 4606 E. Admiral Place. His business, Shoe Smiles, is located in an out-of-the-way retail strip, tucked between a beauty salon and a police supply shop.

“This is something I’ve always wanted to do,” he says. “The airport was good to me. It put food on the table and on my plate. But it was just time.”

Time to slow down a tad.

At his new digs, Torrence works from 9 to 5, a departure from the 11- and 12-hour days he used to log at the airport. Longtime customer Chris Armstrong is among those who has sought out the $8 shine on Admiral.

“In my job, I used to have to travel all the time,” Armstrong says as Torrence buffs his boots. “Every week, I was gone somewhere. So if he was there, I would stop.”

Over the years, the two have shared more than small talk. Armstrong has a son who mentored one of Torrence’s boys at the U.S. Air Force Academy.

“He is a close friend, and as you can tell, he does a fantastic job,” Armstrong says. “He’s always fun to talk to. He always has a smile.

“He has hundreds and hundreds of friends from the airport, I can guarantee it.”

On a chilly, wet Friday, Torrence is wearing blue jeans and a pink shirt. “Boston” and “Shoe Smiles” are sewn in white thread into his denim apron. On a counter to his right are rows of footwear waiting to be massaged.

“I’m getting fewer people coming through the door, but they are bringing in multiple pairs of shoes,” he says. “At the airport, they couldn’t do that.”

The science of the shine

Paramount to a good shine, he says, is a thorough scrubbing.

“If you don’t clean them first, you’re just rubbing the dirt into the leather,” Torrence says.

Then, it comes down to touch.

“Nobody wants to get their hands dirty, so they use rags,” Torrence says. “This is just like human skin to me. You have to feel. If you’re putting lotion on your hands, you want to rub that lotion until it feels like it’s in. You can’t do that with a rag. You get more polish in the rag than you do on the shoe.”

Ecco is the brand he polishes most often. As for challenging textures, it is no contest.

“Snakeskin is probably my worst,” says Torrence, who wears a brace on his left wrist as a result of carpal tunnel syndrome. “My hands cramp up just looking at them. You can’t go against a scale. You have to go this way and that way and most of them are patches going different ways. Man!”

Victor Latimer pops in mid-morning and takes a seat to wait his turn. He talks about a recent conversation he had at a coffee shop.

“I had been by to see Boston that morning, and I had some brown loafers on,” Latimer says. “There was an old Indian guy sitting next to me and he said, ‘Nice job on your shoes. You don’t see that a whole lot.’

“For a lot of people, it’s not a thing anymore. But his thing was shoes.”

Latimer hops into Torrence’s chair and places his wing tips on the foot rests. The pair have a history at the airport; Latimer was a skycap there for 41 years before retiring in 2015.

Torrence started learning his craft at age 9, working at a neighborhood shoeshine parlor in his hometown of Little Rock, Arkansas.

“It had about eight chairs,” he says. “The older guys taught the younger guys how to do it. It wasn’t the kind of place where I’d want my kids hanging out.”

He wanted to continue polishing leather out of high school but was encouraged to get an education. Torrence ended up studying electronics at DeVry University in Dallas before taking a printing job with a Tulsa company in 1985. When that firm closed its doors, he bought a shoe stand and set up at the Williams Center Forum, later moving to the airport.

Torrence might still be at his post-security station on concourse A if not for enhanced aviation safety measures that followed the terrorist attacks of Sept. 11, 2001.

“Nine-11 changed a lot of stuff,” he says. “I had to go through everything a passenger goes through. I couldn’t take a cup of coffee to my shoeshine stand, things like that.

Steve Heyman, a partner at the Tulsa-based energy company Nadel and Gussman, brings his shoes to Torrence and enthusiastically doles out his business card.

“He’s a gentleman,” Heyman says. “In a lot of ways, he was sort of an ambassador on that concourse, which was American and Delta. His is the best shine in Tulsa.”

“He’s a very, very nice man,” Bartlett says. “He always has a nice conversation. … I’ve been to a lot of airports, a lot of places where they have a shoeshine shop, and usually they get in a hurry and want to give you a quick shine, zip, boom, you’re gone, ‘next, please.’

“But he really takes his time. It’s a very good shine, and it lasts a long time.”