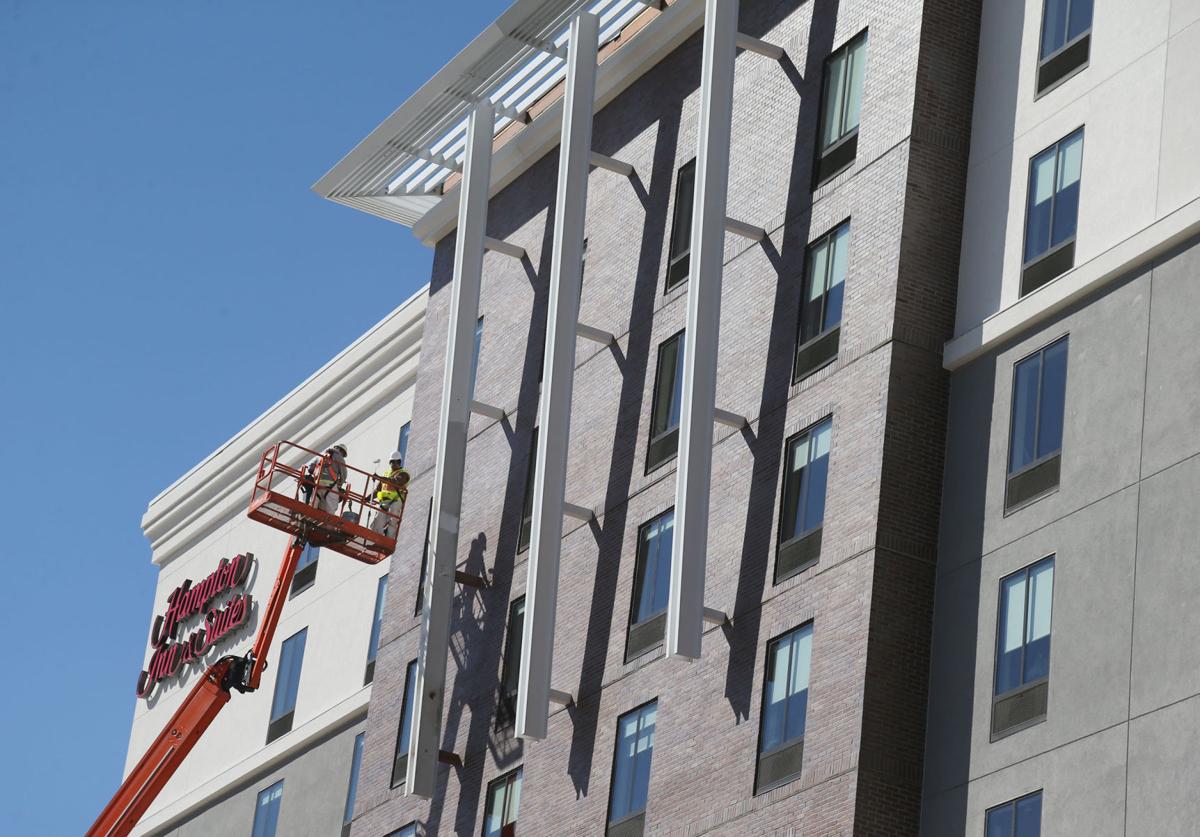 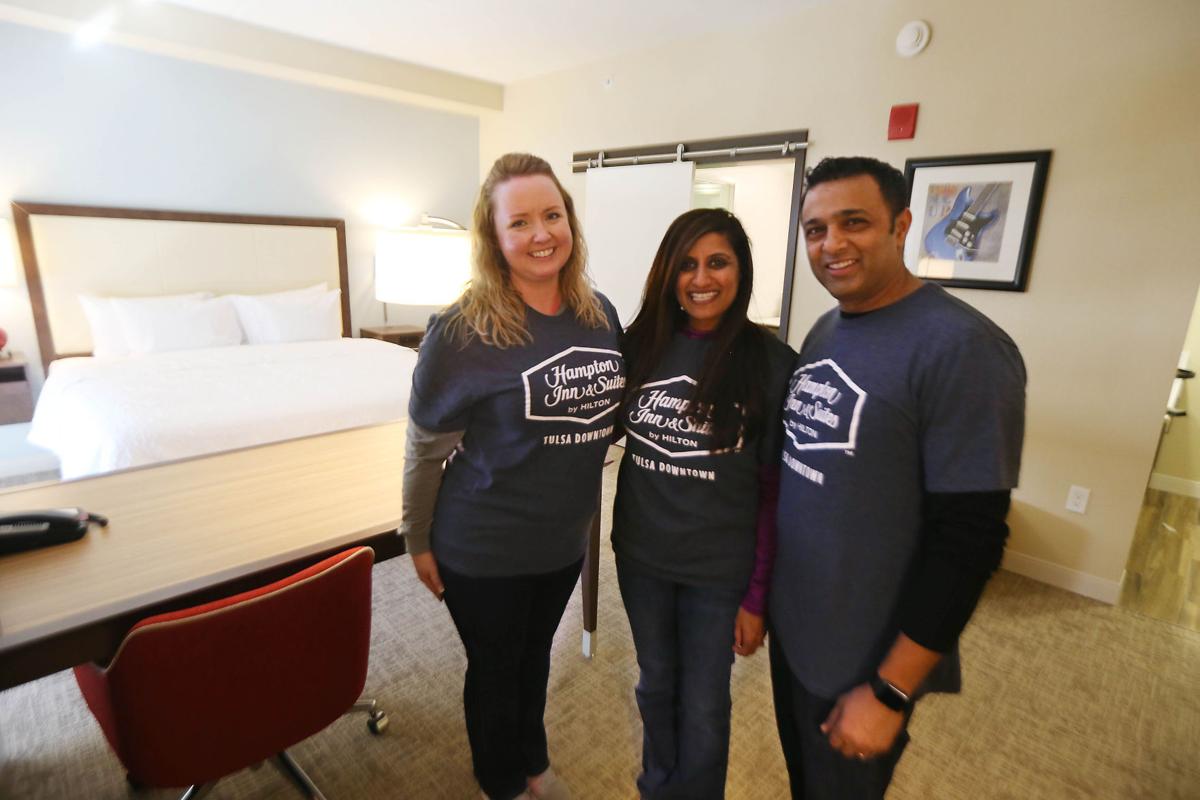 General Manager Michelle Russell (left) stands with Tina and Pete Patel of Promise Hotels inside one of the rooms Friday at the new downtown Hampton Inn & Suites. TOM GILBERT/Tulsa World 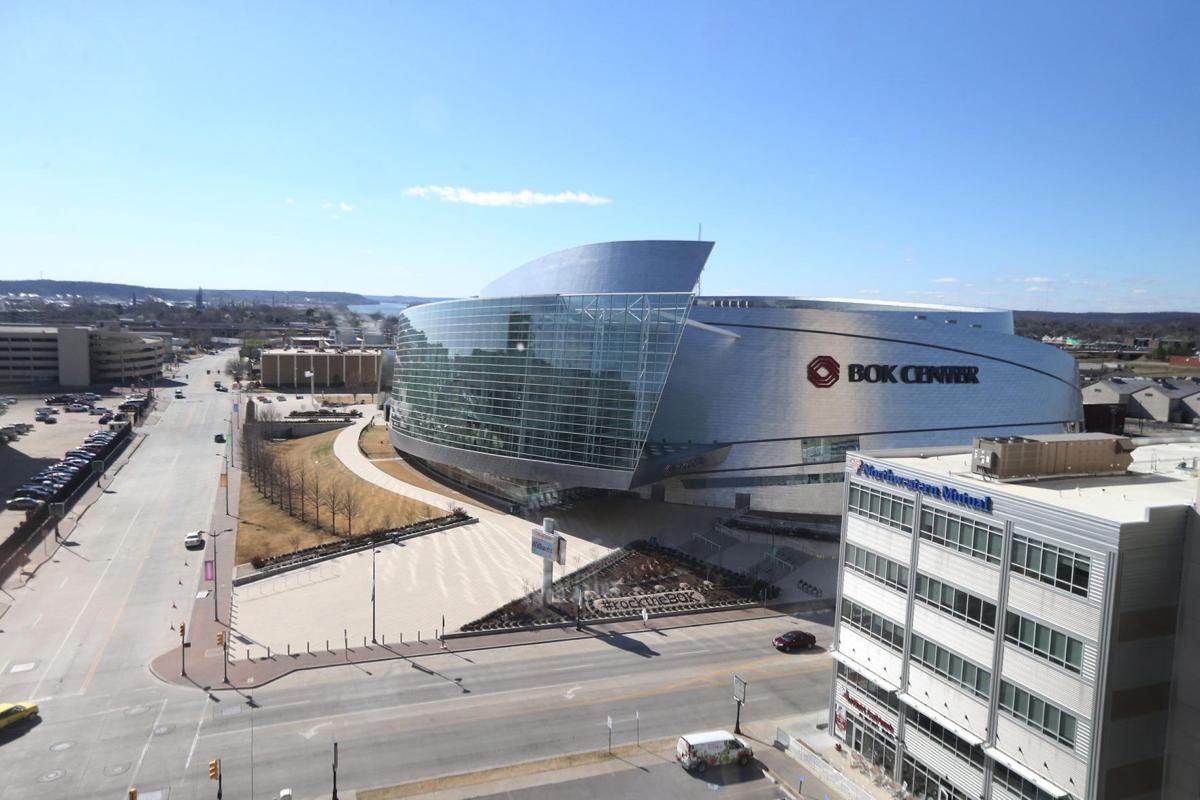 The BOK Center can be seen from a room at the new Hampton Inn & Suites. The downtown hotel opens on Thursday. TOM GILBERT /Tulsa World

But soon it could refer to the bustle at the Hampton Inn & Suites at Third Street and Cheyenne Avenue.

At least 60 staffers, vendors and construction workers are prepping for the Thursday opening of the nine-story, $17.5 million facility being developed by Promise Hotels.

“March is just going to be an amazing month,” said Pete Patel, CEO and president of Promise Hotels.

Located across Denver Avenue from the BOK Center, the 125-room Hampton Inn will be able to accommodate last-minute arrivals to the Big 12 Wrestling Tournament, which is scheduled for March 4 and 5 at the BOK. On deck at the BOK are first- and second-round games of the NCAA Men’s Basketball Tournament March 17 and 19. And in between is a Miranda Lambert concert at the arena March 11.

“The good thing with basketball is, teams don’t know where they are going,” Patel said. “They will know that week of. That’s when the bookings really happen for fans — and teams really.

“Our timing of opening maybe a week and half to two weeks before the tournament is perfect.”

Ross Group built the hotel, Promise’s ninth new offering, on a small parcel that has needed the assistance of lane closings to accommodate the work.

“I tell everybody that in downtown you have to think up, not out,” said Michelle Russell, the hotel’s general manager.

Local artwork is hung in the Hampton’s rooms, which feature carpet squares that be easily replaced if stained. Patrons of the Hilton Honors program can use a smart phone application that allows guests to select and enter their room digitally.

The hotel also has a swimming pool and views of the downtown skyline from three of the building’s sides.

“Three years I started scouting,” Patel said. “I told Tina (his wife and Promise CFO) that we had to have presence in downtown. We knew that the arena was bringing in a lot of business. We were fortunate to get this piece of land.”

The hotel couldn’t accept reservations until a month after the anticipated opening. But it already has booked 300 reservations (600 room nights) for April 1 and beyond, Russell said.

“Even when basketball’s gone and wrestling’s gone and besides the arena, there’s a strong corporate business Monday through Friday that we will be able to call on,” Patel said.

General Manager Michelle Russell (left) stands with Tina and Pete Patel of Promise Hotels inside one of the rooms Friday at the new downtown Hampton Inn & Suites. TOM GILBERT/Tulsa World

The BOK Center can be seen from a room at the new Hampton Inn & Suites. The downtown hotel opens on Thursday. TOM GILBERT /Tulsa World