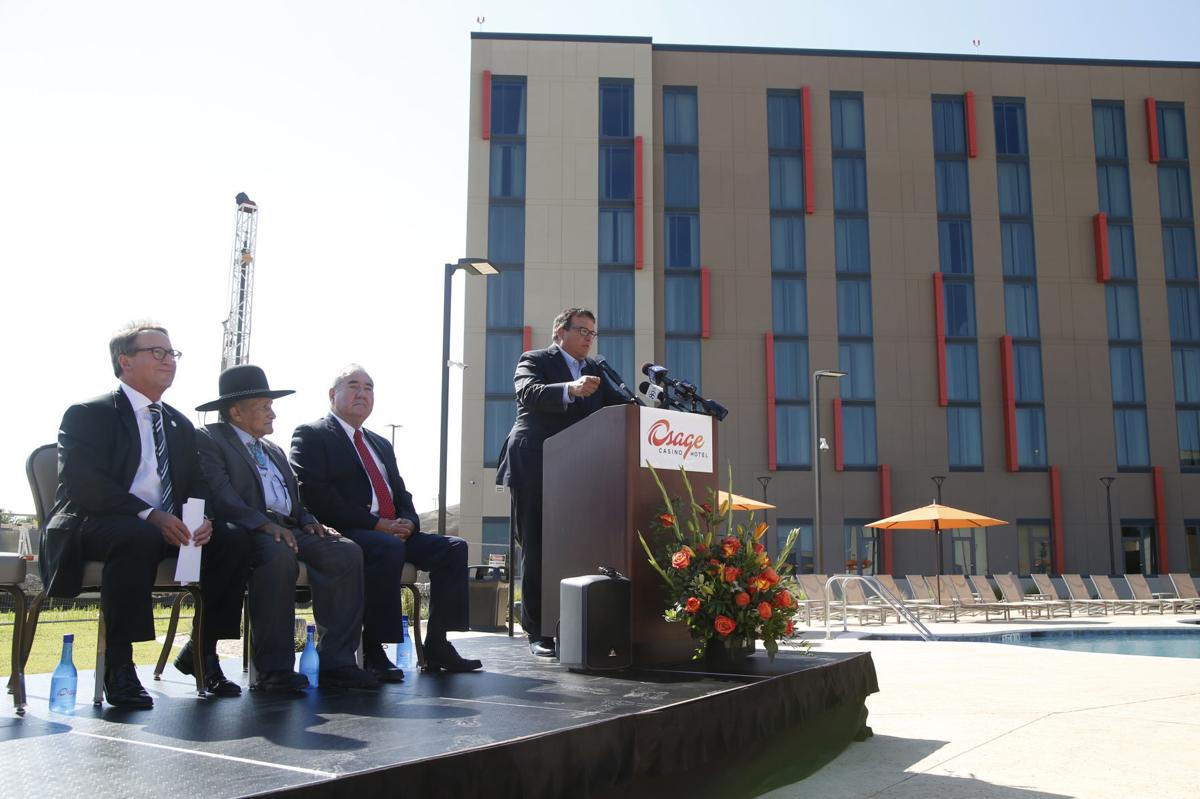 Byron Bighorse, CEO of Osage Casinos, speaks during a groundbreaking Tuesday for the latest phase of construction at the Osage Casino Hotel in Tulsa. MATT BARNARD/Tulsa World 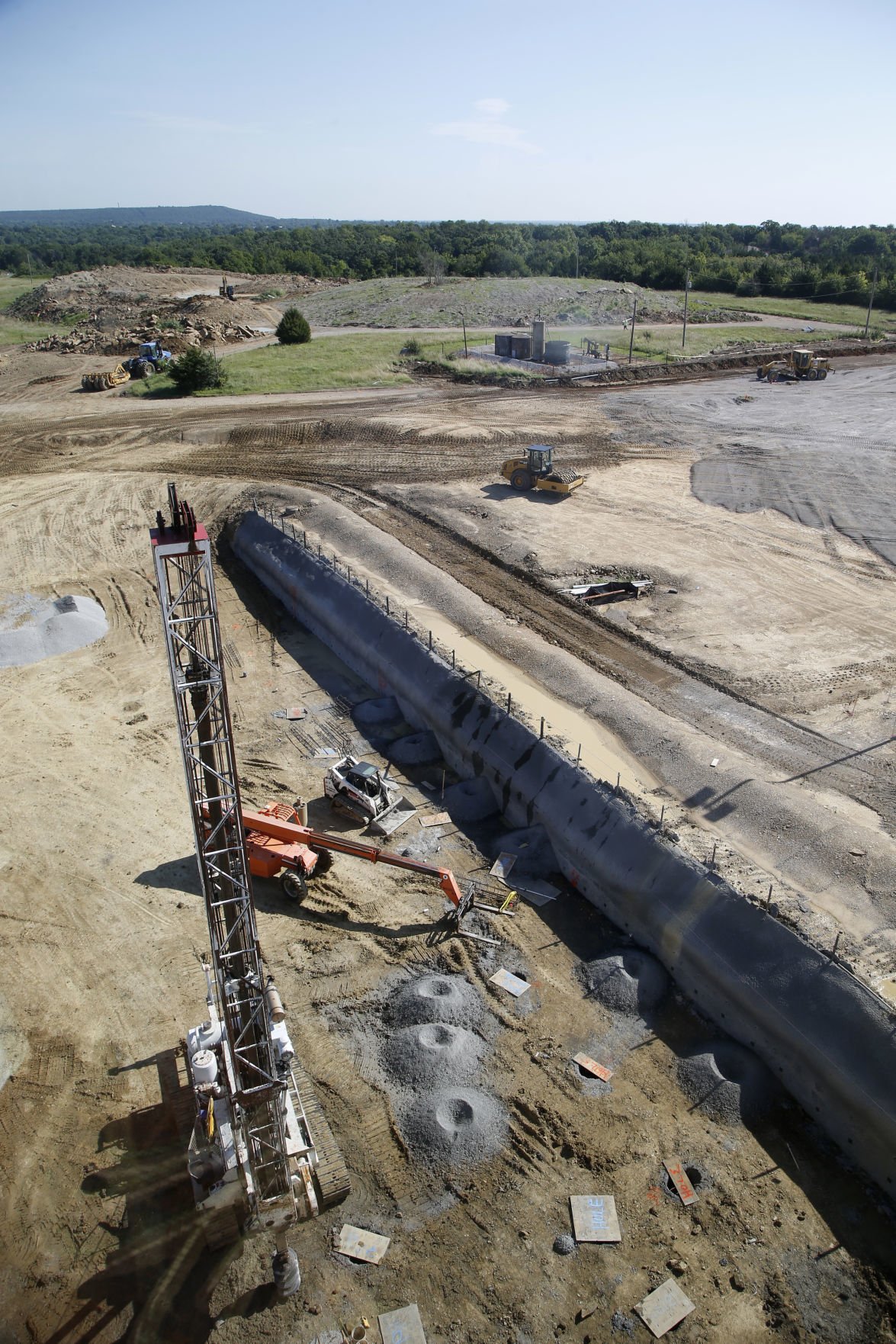 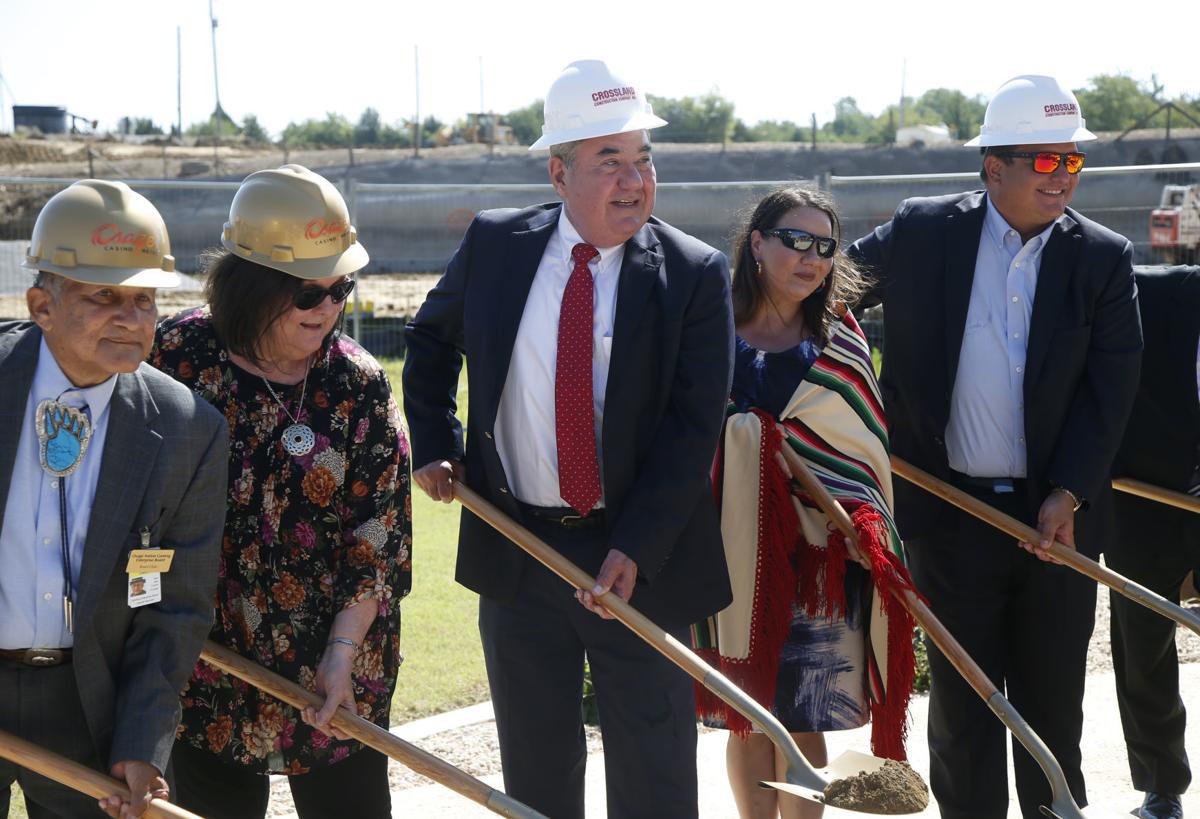 Geoffrey Standing Bear (center), Principal Chief of the Osage Nation, stands with other dignitaries at a groundbreaking for the latest phase of construction at the Osage Casino Hotel in Tulsa, Okla., on Tuesday, July 9, 2019. MATT BARNARD/Tulsa World 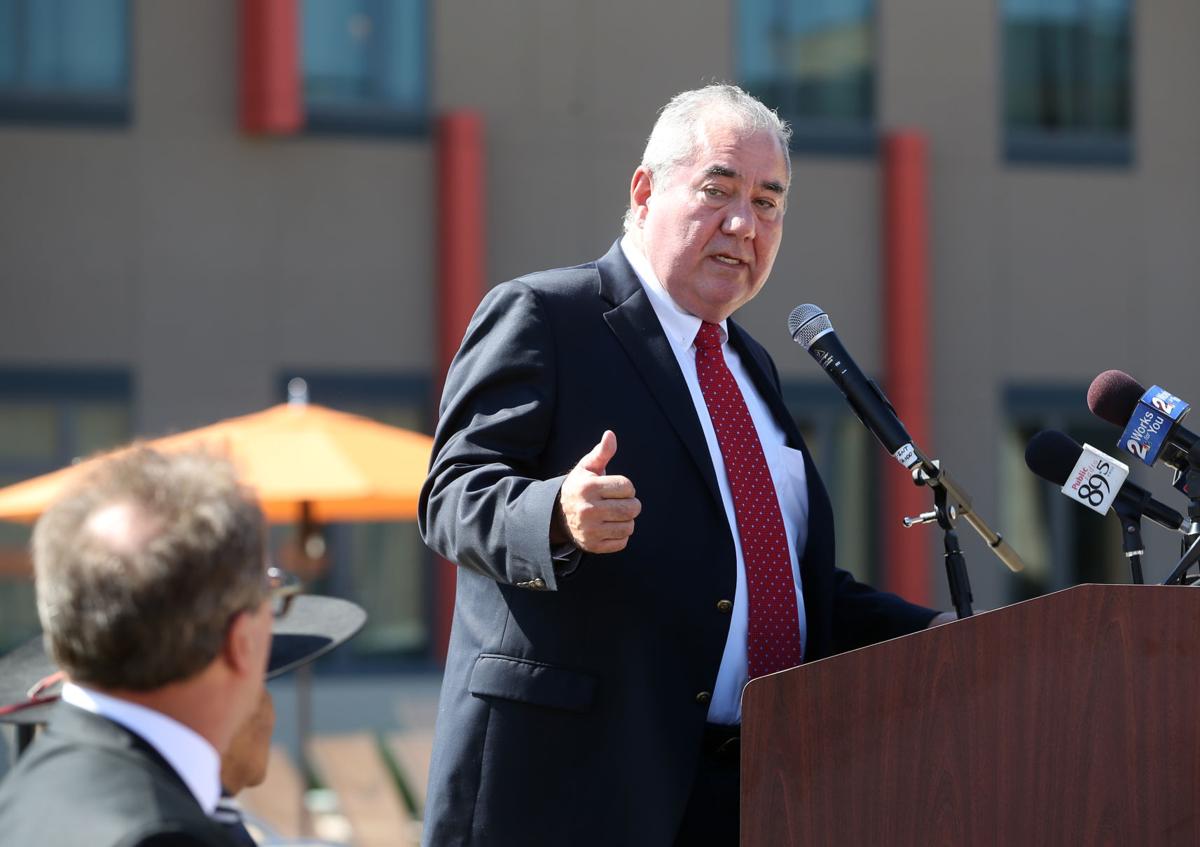 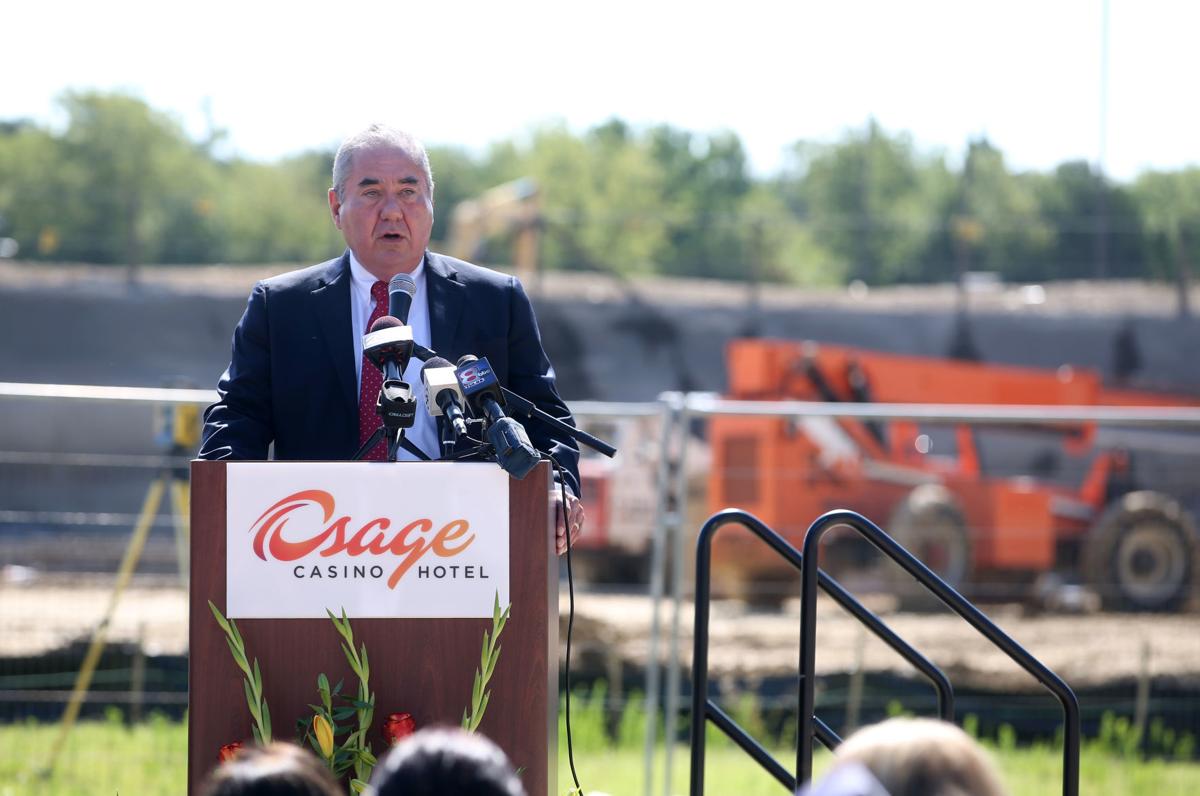 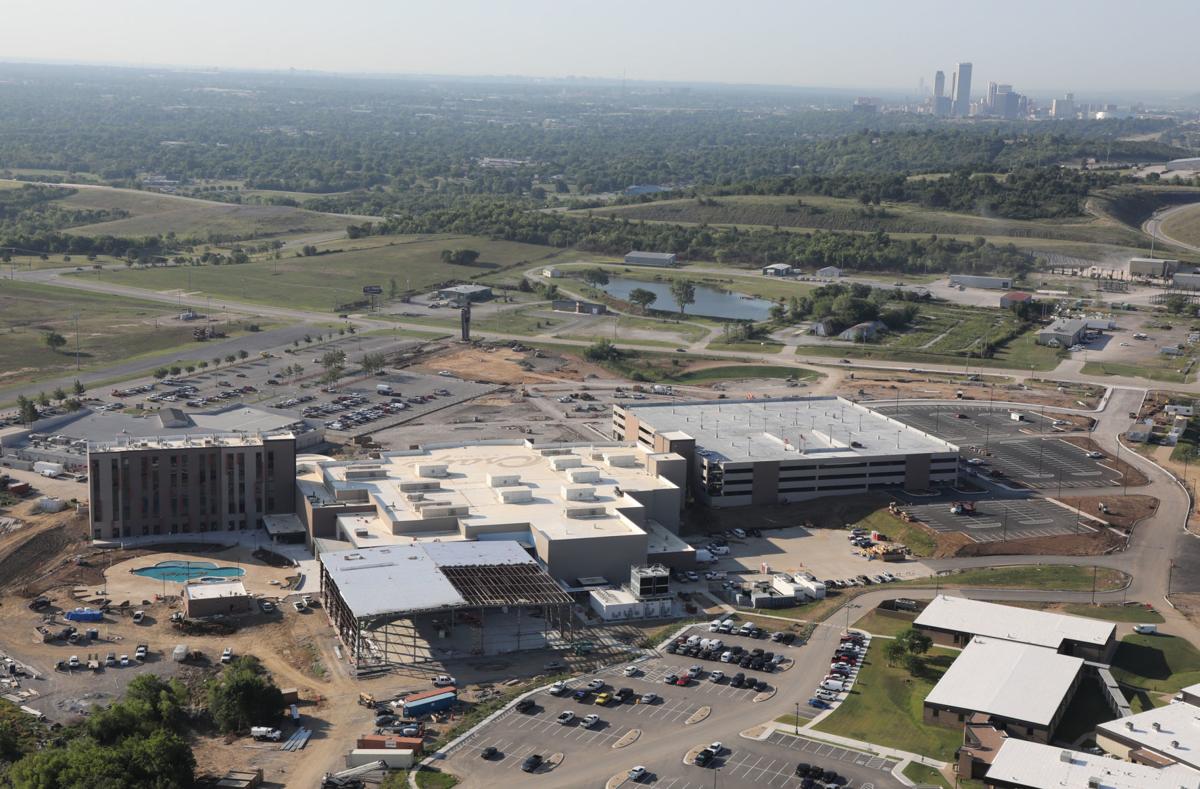 “The minute that we opened this property, I saw an issue right away and that was we didn’t build enough hotel rooms to begin with,” Osage Casinos CEO Byron Bighorse said. “Of course, that was a factor of budgets.

“…This was originally in our plans to have this many rooms. So I’m very excited to see this happen.”

The largest Osage Casinos footprint, the entire complex at 951 W. 36th St. North encompassed 247,000 square feet over its first phase, which opened in September. The six-story tower is expected to be completed in August 2020.

“We knew that we had something special here,” he said. “And I knew that my staff that works so hard every day could pull it off.”

Mike Neal, president and CEO of the Tulsa Regional Chamber, said more than 21 million people visited Oklahoma in 2017, according to the most recent statistics from the Oklahoma Department of Tourism and Recreation.

Those visitors spent a record $8.9 billion that year in the state. In Osage County alone, visitor spending was up 11% in 2017, translating into a 11.7% increase in municipal, county and state income tax revenue.

“The key takeaway is that investing in tourism infrastructure is a benefit to us all,” Neal said. “…Tulsa is no longer a secret. There are great things happening here. Tribal nations have really been at the forefront of attracting new visitors to Tulsa and new visitors to the Osage Nation.

Stitt has said he wants compacts that reflect “the state of affairs today.” Oklahoma has the third-largest gaming market in the country, behind only Nevada and California, generating an estimated $4.5 billion in annual revenue for the tribes.

Standing Bear said the since the implementation of the compacts, “gaming has been the one area in this state where you’ve seen strong, consistent growth.”

The tribes are the third-largest employer in the state, providing jobs to more than 54,000 Oklahomans. The agreements between the state and the tribes giving them exclusivity to the gaming industry expire Jan. 1.

“Our confidence is high,” Standing Bear said. “Because if we weren’t, we wouldn’t be putting tens of millions of dollars into this local economy, as we are doing now.”

“…It’s really important to remember that we can’t over-regulate and we can’t over-tax or put fees on these activities and expect them to be profitable. Because 100% of the profits of this enterprise goes to our people, for our culture, our education, our health. So when we tax on these enterprises, we’re taxing our people.”

Photo gallery: From the luxury rooms to the beer cave, see inside Tulsa’s newest casino space

The lavishness of the Tulsa Osage Casino’s new $160 million casino and hotel expansion was on full display Wednesday.

Byron Bighorse, CEO of Osage Casinos, speaks during a groundbreaking Tuesday for the latest phase of construction at the Osage Casino Hotel in Tulsa. MATT BARNARD/Tulsa World

Geoffrey Standing Bear (center), Principal Chief of the Osage Nation, stands with other dignitaries at a groundbreaking for the latest phase of construction at the Osage Casino Hotel in Tulsa, Okla., on Tuesday, July 9, 2019. MATT BARNARD/Tulsa World