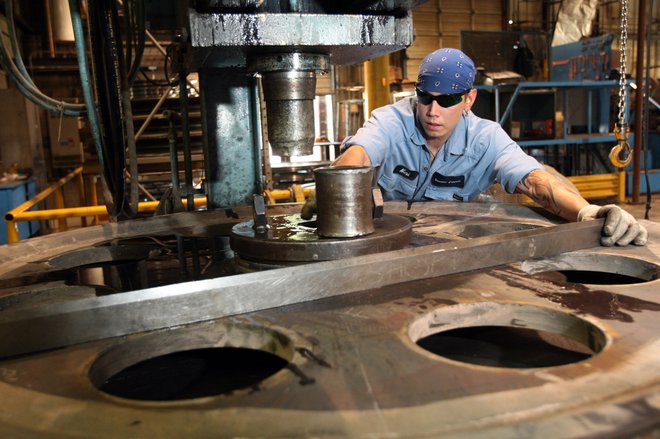 Mark Henley, a sheave technician at Gunnebo Johnson Corp., inspects a sheave's dimensions Friday at the company's factory, where parts are being produced for a mammoth floating crane called the Asian Hercules III. CORY YOUNG/Tulsa World 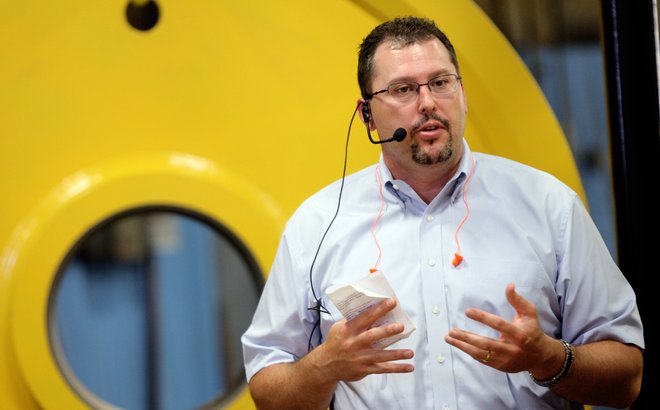 Craig Aszkler: The company has added 50 employees in the past 18 months, its president and CEO says

Read more about manufacturers in the Tulsa area.

Gunnebo Johnson is doing some heavy lifting at its Tulsa factory, and the builder of crane components will be looking for more than 50 people to help do it.

The company is in the midst of a $10.6 million project producing parts for a massive marine crane called the Asian Hercules III.

As its name suggests, the mammoth rig will have a 500-foot reach and capacity to lift more than 11 million tons. It will be used in the construction of offshore oil platforms, bridges and similar projects.

Gunnebo Johnson Corp., which manufacturers equipment for cranes in the construction and energy industries, is contracted to build the lifting tackle - the hooks and pulleys that raise and lower loads - for the Asian Hercules.

The total project, split between dozens of manufacturers worldwide, is expected to cost about $450 million.

The crane contract and a growing number of other orders are boosting revenue at Gunnebo Johnson, officials said, so the company plans to hire 57 people during the next three years.

"In the last 18 months we've grown by 50 employees, and we think we'll grow more," said Craig Aszkler, president and CEO.

Aszkler announced Friday that the company was accepted into the state's Quality Jobs Program for the 57 jobs it anticipates adding. The program gives companies up to a 5 percent payroll tax rebate for creating high-paying jobs in the state.

Gunnebo Johnson hopes to add as many as 21 people in the next year and the rest by 2015, company spokeswoman Tracie Frost said.

Gunnebo Johnson started out in the 1930s as an oil industry equipment maker but now primarily makes equipment for cranes, often serving the energy industry.

In the 1980s it was purchased by a Swedish company, Gunnebo Industrier AB.

Employment now stands at about 200.

Mark Henley, a sheave technician at Gunnebo Johnson Corp., inspects a sheave's dimensions Friday at the company's factory, where parts are being produced for a mammoth floating crane called the Asian Hercules III. CORY YOUNG/Tulsa World

Craig Aszkler: The company has added 50 employees in the past 18 months, its president and CEO says