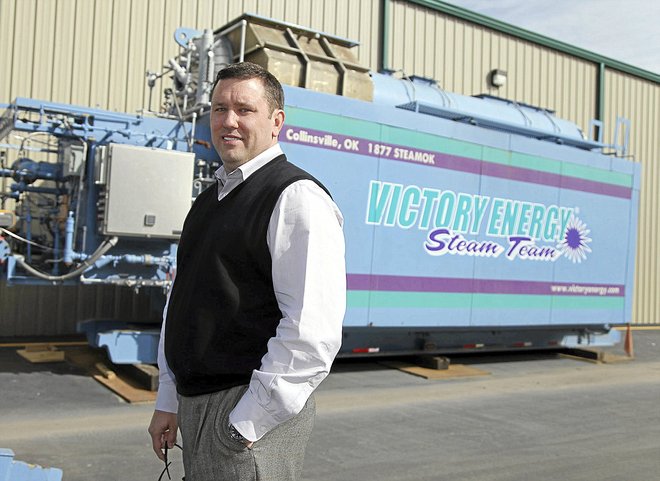 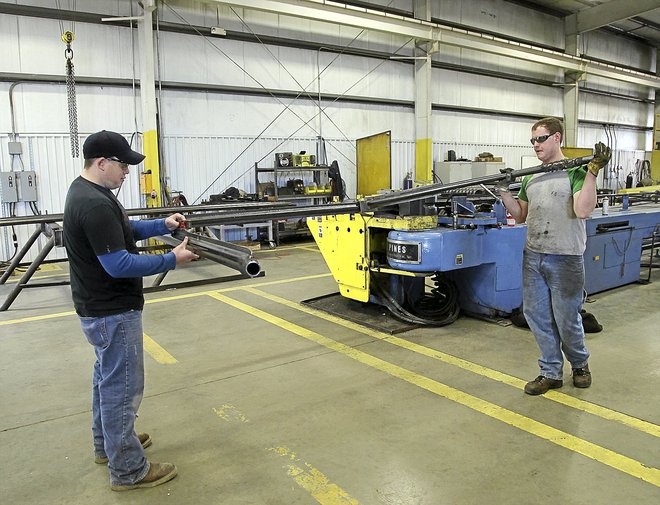 Matt Wolkey (left) and Ryan Wiggins bend a pipe as part of their work at Victory Energy LLC in Collinsville. STEPHEN PINGRY/Tulsa World

"When you're trying to produce steam, you want to put as little natural gas into the boiler as you can to produce the results you need," Viskup said. "We want to be as precise as possible."

The right temperature isn't the only thing Viskup and Victory Energy have gotten right during the company's 13 years in business.

The Collinsville-based boiler manufacturer, with 220 workers, has grown into a major employer in the region and is sending its massive products to a variety of projects across North America.

Victory Energy LLC now has two facilities in Oklahoma, including a top-of-the-line, 125,000-square-foot facility in Collinsville where it makes boilers for energy companies, schools, hospitals and other customers.

"We've been able to diversify, and it really helped us when things got rough" in 2008, Viskup said.

Viskup, who got his professional start in Chicago, founded the business in 1999 not long after beginning his career in the energy industry.

"I started the company when I was in my late 20s," he said. "I knew a little bit about the business and manufacturing, but that was about it."

He picked a location in Collinsville because of good access to steel suppliers and a rail line that connects the company's facility to major transportation systems.

The company opened a factory in Cushing in 2006 to attract employees from the Oklahoma City market and connect with oil industry companies that use the Cushing oil hub.

One of Victory Energy's latest projects is a massive 300,000-steam-pounds-per-hour boiler destined for the Athabasca Oil Sands fields in Alberta, Canada. That boiler will be used to pump steam into the ground to soften the thick tar sands crude so it can be pumped out.

Other boilers in the shop are destined for universities (for heating), power plants, refineries and other projects.

Another of the company's creations is headed to a plant where it will help convert excess gasses into energy, adding a green element to the manufacturer's resume.

"We've been working very hard on branding and social media as a way to market the company," Viskup said. "You can make great products, but to grow people need to know who we are."

The company's marketing manager, Charles Swallow, has been charged with the social media effort, making videos and increasing the company's Web presence.

And Victory's emphasis on image is highlighted by its headquarters building. Constructed in 2007, it features a modernist design of glass and concrete rare to manufacturers.

The company also has a 75,000-steam-pounds-per-hour portable boiler mounted to a semi-truck for emergency needs.

"We can have this thing pretty much anywhere in the region in 24 to 48 hours," Viskup said. "If something breaks down, we can be there."

The Collinsville plant employs a mix of welders, pipe fitters, benders and other workers to build the large pieces.

Boilers are essentially hundreds of feet of metal tubing welded and fitted together. It's a labor-intensive process.

"We make boilers, but I'm most proud of all the jobs we're able to provide," Viskup said. "Not many people think you can compete in the United States manufacturing, but I want to show we can."

Matt Wolkey (left) and Ryan Wiggins bend a pipe as part of their work at Victory Energy LLC in Collinsville. STEPHEN PINGRY/Tulsa World