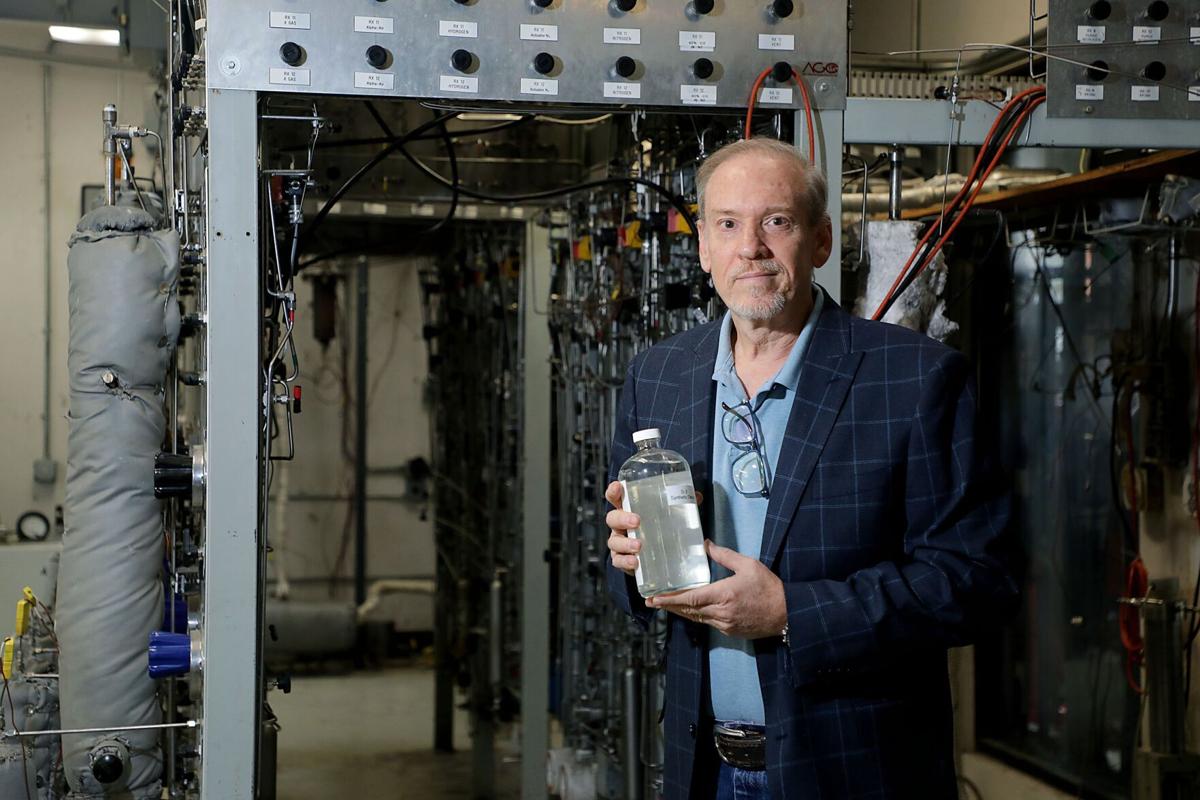 Kenneth Agee, president of Emerging Fuels Technology, poses at the company’s headquarters in Tulsa on Oct. 25. 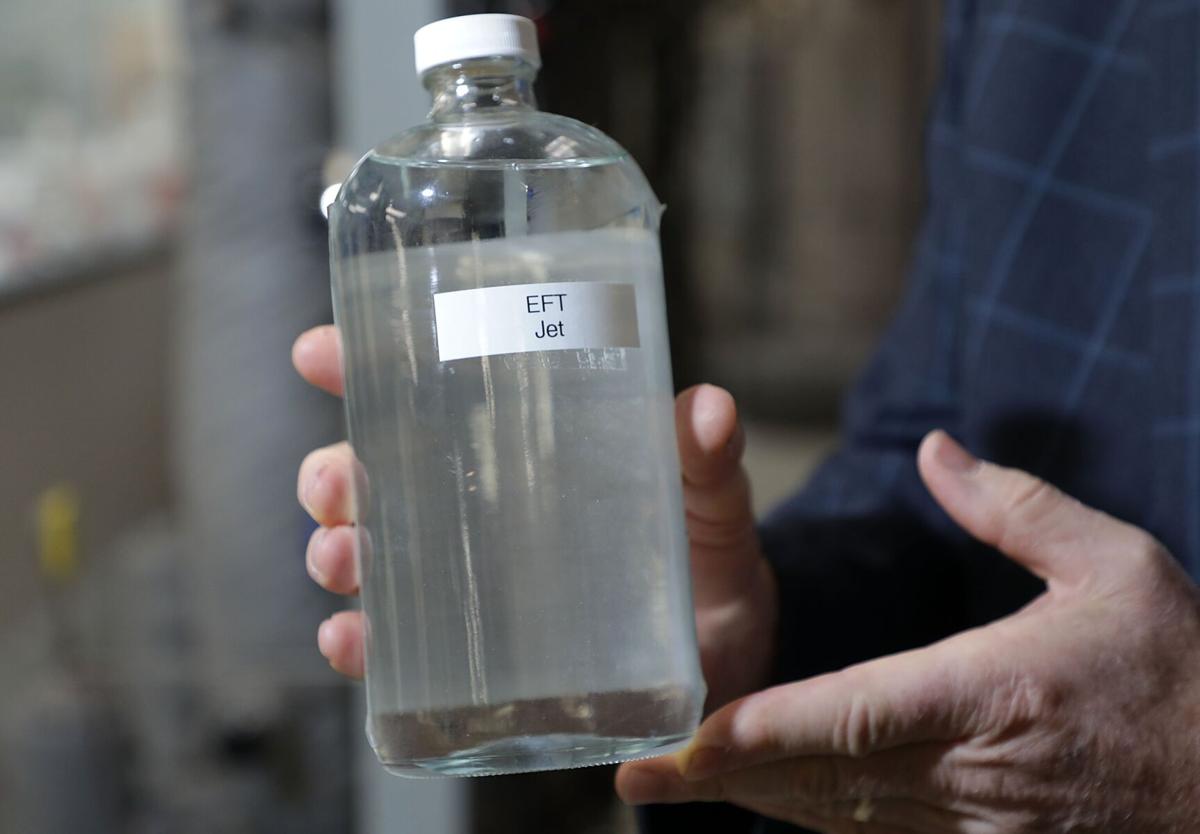 Kenneth Agee, president of Emerging Fuels Technology, holds a container of the jet fuel made in partnership with a California company and the U.S. Air Force. 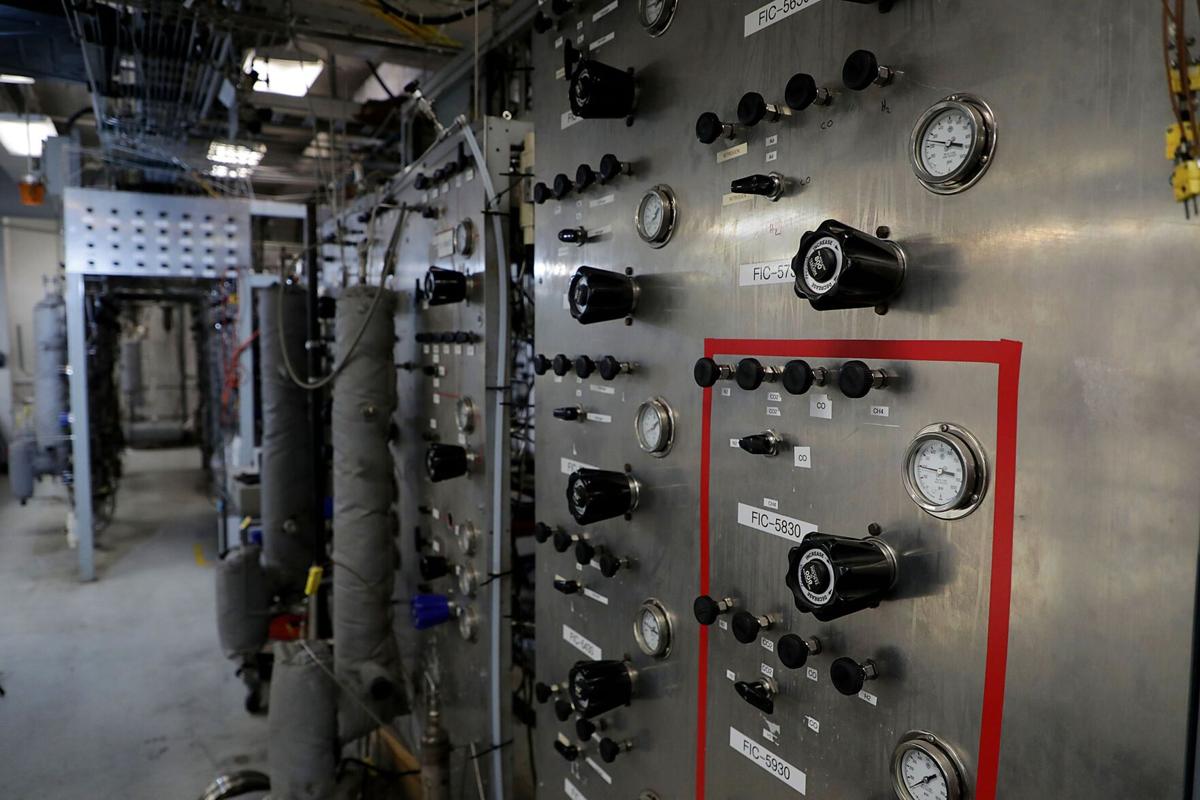 Supported via funding from the Air Force and made in partnership with the Berkeley, California-based company Twelve, the fuel is globally applicable for both commercial and military aviation.

“Theoretically, you could say that if we did a lot of this, instead of CO2 always growing the atmosphere, it would stabilize. They call this sustainable aviation fuel. We need a backup plan. We need another alternative source to crude oil. Everybody’s wanting to have sources that get us carbon-neutral.”

The big threat from additional CO2 is the greenhouse effect. As a greenhouse gas, excessive CO2 creates a cover that traps the sun’s heat energy in the atmospheric bubble, warming the planet and the oceans. An increase in carbon dioxide can affect the Earth’s climate by causing changes in weather patterns.

Global aviation produces 1.2 billion tons of CO2 emissions per year and is among the hardest-to-mitigate sectors because it is technically unfeasible to electrify long-haul planes at scale due to power density challenges. The fossil-free fuel offers a drop-in replacement for petrochemical-based alternatives without any changes to existing plane design or commercial regulations.

EFT, which was established in late 2007, also is working on a project with a company called Red Rock Biofuels, with an under-construction Oregon plant that would be the first one in the world capable of using waste woody biomass as feedstock to make renewable jet and diesel fuels.

“We’ve got an offering under way to raise the money for this company (EFT) to be able to build its own plants, primarily focused on using biogases or feedstock, but the back-end technology is all the same,” said Kenneth’s brother Mark Agee, vice president of development for EFT. “That’s what puts us in the unique position of we’re going to be in on a lot of these projects.

“All the airlines are trying to make deals with somebody who can provide them with a renewable fuel.”

While sustainable jet fuels are considerably more expensive to manufacture, the costs can be offset by government subsidies, the Agees said.

EFT is hoping to build hundreds of plants.

Anaerobic digesters at dairies and at pork facilities make biogas, as do wastewater treatment facilities, he said. Methane is 28 times worse as a greenhouse gas than carbon dioxide, Mark Agee said.

“So grabbing that methane and turning it into something useful, you can actually end up what they call a carbon-negative fuel,” he said.

Throwback Tulsa: Remembering Will Rogers, who was born on this day in 1879

Will Rogers "Pioneer of the Year" Dinner

January 2016: A tour of Rogers High School with Growing Together

Encompassing 25,000 square feet, the center also contains a retail meat market and is located just south of the tribe’s Duck Creek Casino a few miles south of Glenpool on U.S. 75. Both the processing services and the retail portion are open to the public.

American Airlines' CEO to step down at end of March; company president to succeed

Doug Parker, who will remain board chairman, will leave after 20 years as CEO. He crafted the 2013 landmark out-of-bankruptcy merger with U.S. Airways.

The event also featured a panel discussion among tribal leaders.

Hydrogen has strong potential as energy source in state, according to task force report

The report lays out a vision of how to focus efforts for the economic development of hydrogen as a fuel source for transportation, industrial, commercial and other sources.

Kenneth Agee, president of Emerging Fuels Technology, poses at the company’s headquarters in Tulsa on Oct. 25.

Kenneth Agee, president of Emerging Fuels Technology, holds a container of the jet fuel made in partnership with a California company and the U.S. Air Force.