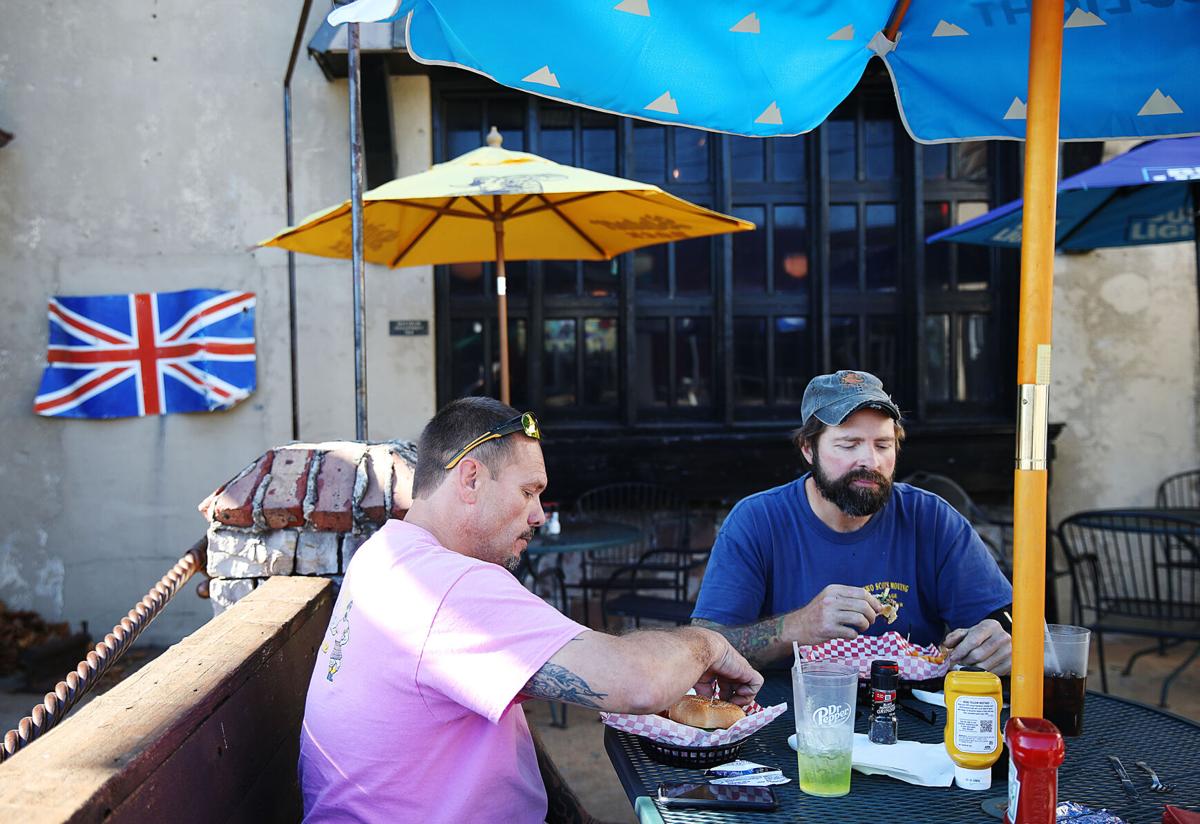 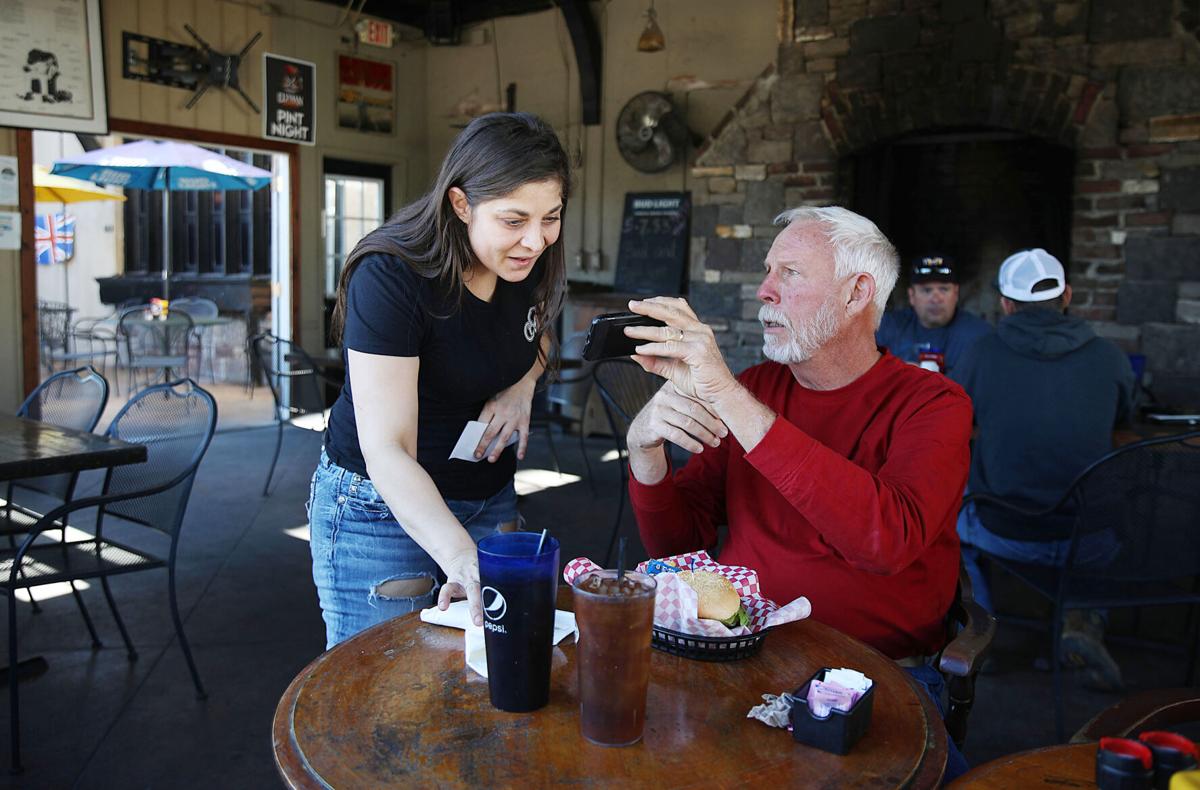 Galen Schwertfeger (right) shows a photo of the restaurant when it was crowded to his server Ashley Crow as she delivers his lunch Tuesday at Crow Creek Tavern and Restaurant on Peoria Avenue at 35th Place. 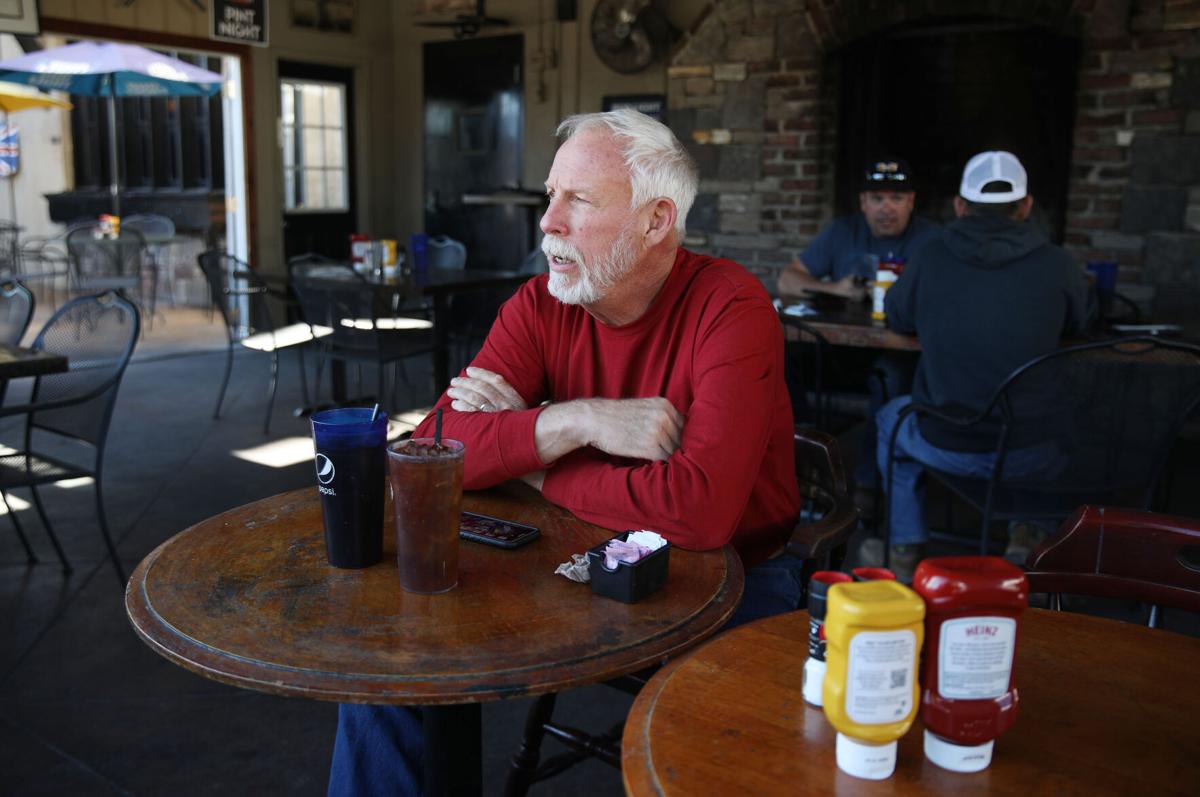 Local feedback to new, COVID-19-prompted restrictions on restaurants and bars is — like some of the drinks they serve — mixed.

Gov. Kevin Stitt on Monday ordered restaurants to place tables at least six feet apart, beginning Thursday. That same day, restaurants and bars will be required to close by 11 p.m., with the exception of delivery or drive-through windows.

“I don’t think it will be much of a change for us,” said Jim O’Connor, who heads operations at Tulsa-based McNellie’s Group. “We’ve been doing most of this all along, the spacing of tables, wearing masks, obviously a new level of cleaning. So, the biggest change for us now will be the curfew.

“But we’re more than willing to do our part to control this thing.”

Stitt’s measures come as a record number of patients — nearly 1,400 — remain hospitalized across the state related to COVID-19. Close to 400 of those patients, according to the most recent survey of facilities, are in intensive-care units.

“The curfew is a bit of a burden, especially this time of year,” O’Connor said of the venues, some of which normally close at 2 a.m. “This is one of the busier times of the year for us, from now until New Year’s. Losing that late-night business will hurt. ...

“I know Congress is back in session and we’re hearing rumblings of something (related to a federal stimulus) coming from D.C. That would be very helpful to us because our sales are already down. Being forced to close earlier is going to impact that even more.”

To help mitigate earnings lost because of the coronavirus, McNellie’s Pub downtown opened roughly a 4,000-square-foot patio two months ago.

“The outdoor dining for us has been a blessing,” O’Connor said. “We have a decent number of outdoor options. But we don’t have a lot of those days left. That’s another thing that is concerning for us.”

While prepared to accommodate the new mandates, he said bars and restaurants are bearing the coronavirus burden among businesses.

“If you go to any big-box retailer right now, there are no restrictions at all,” O’Connor said. “Most of them are requesting masks but beyond that, ... I was at a big-box retailer last weekend, and it was business as usual.”

“To be honest, we don’t have to change much. Aside from removing a couple of bar stools, we’ve been giving six feet of space between tables this entire time.

“My employees are all wearing masks. We don’t stay open past 11 p.m., anyway.”

She does, however, share O’Connor’s concerns about the equitability of the restrictions.

Josh Gifford is owner and managing partner of Soundpony, a cycling-themed bar that opened in Tulsa in 2006.

“We are all about public safety, including the regulars who come in here and mingle and see what we have to offer,” he said. “So anything that is moving in the direction of helping stop the spread is good.”

“It hurts, personally,” Gifford said. “It hurts the business.”

To combat fewer hours of in-person operation, Soundpony plans to roll out some curbside specials this week from 11 p.m. to 2 a.m., he said.

“For me, this is all I have,” Gifford said. “This is my career, working and running this business and making sure that it survives. There is a definite light at the end of the tunnel with the announcement of vaccines. But we as bar people will probably be one of the last to receive those. We’re not considered essential, at least that’s what they say.”

Business viewpoint: Protecting your small business from a data breach

Data breaches are on the rise, and small businesses need to be thinking about how to protect themselves.

Officials on Friday toured The District's phase one, a 32,000-square-foot retail center that complements the park.

Galen Schwertfeger (right) shows a photo of the restaurant when it was crowded to his server Ashley Crow as she delivers his lunch Tuesday at Crow Creek Tavern and Restaurant on Peoria Avenue at 35th Place.