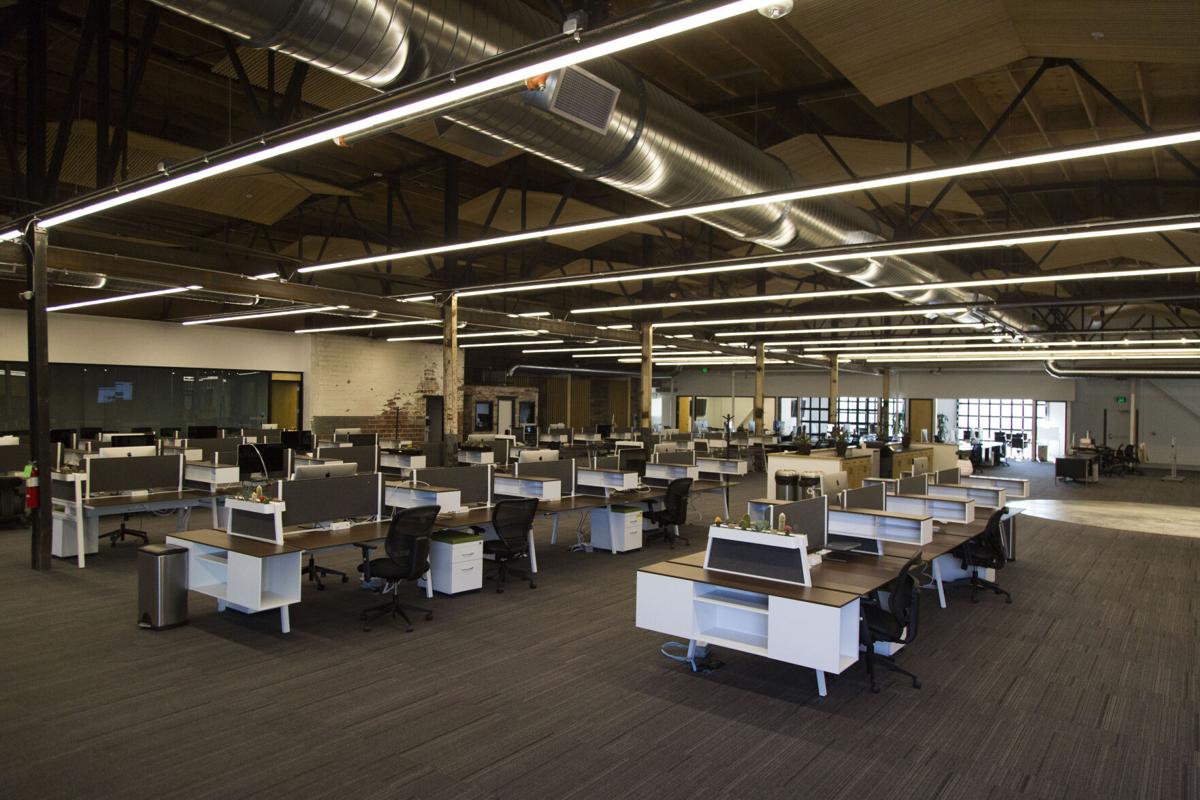 ConsumerAffairs will be the sole tenant in a new, 44,253-square-foot redevelopment in the East Village. 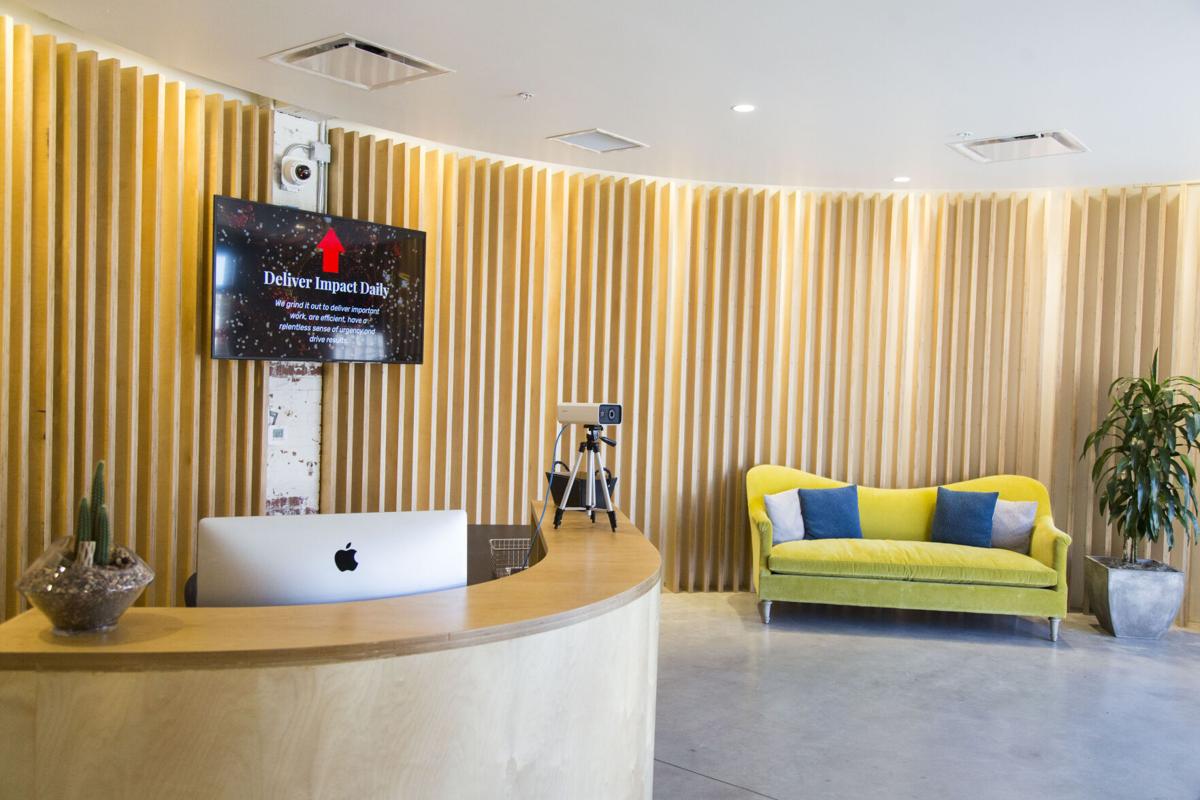 The entrance to the offices of ConsumerAffairs is pictured last week. 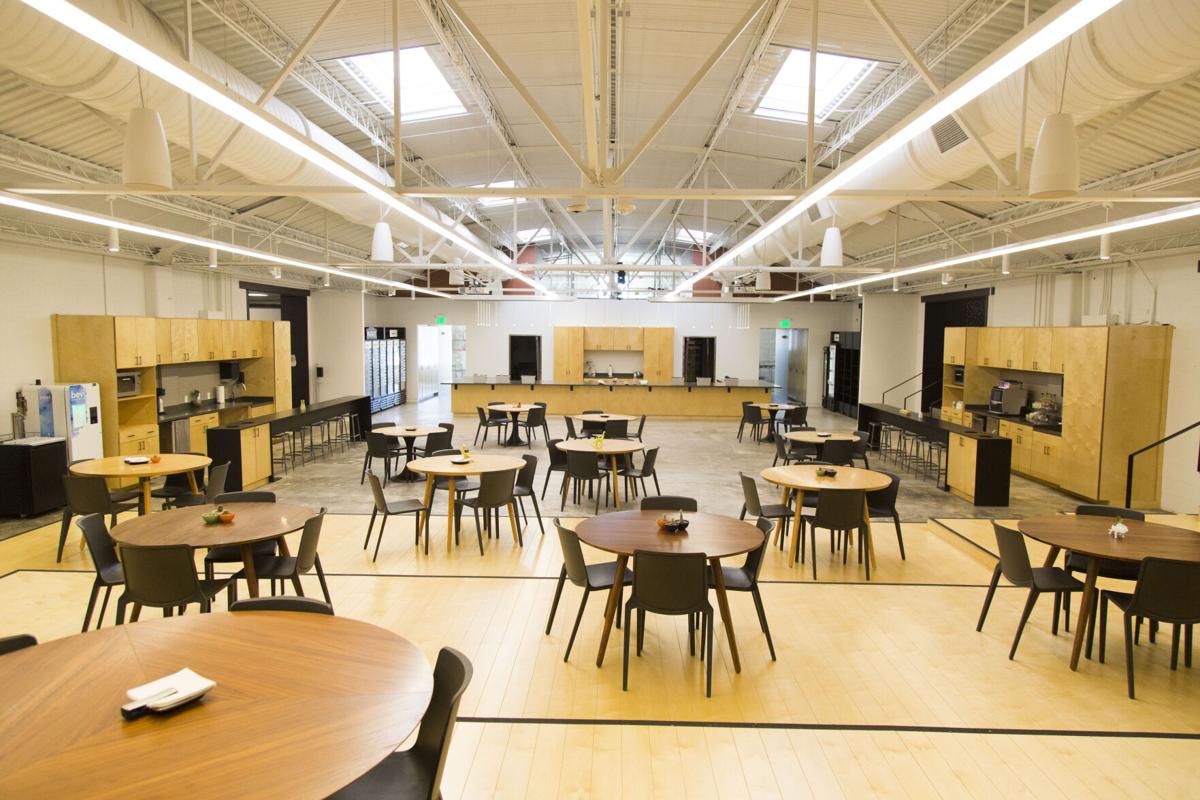 The cafeteria at a recently completed redevelopment that will house ConsumerAffairs is pictured last week downtown. 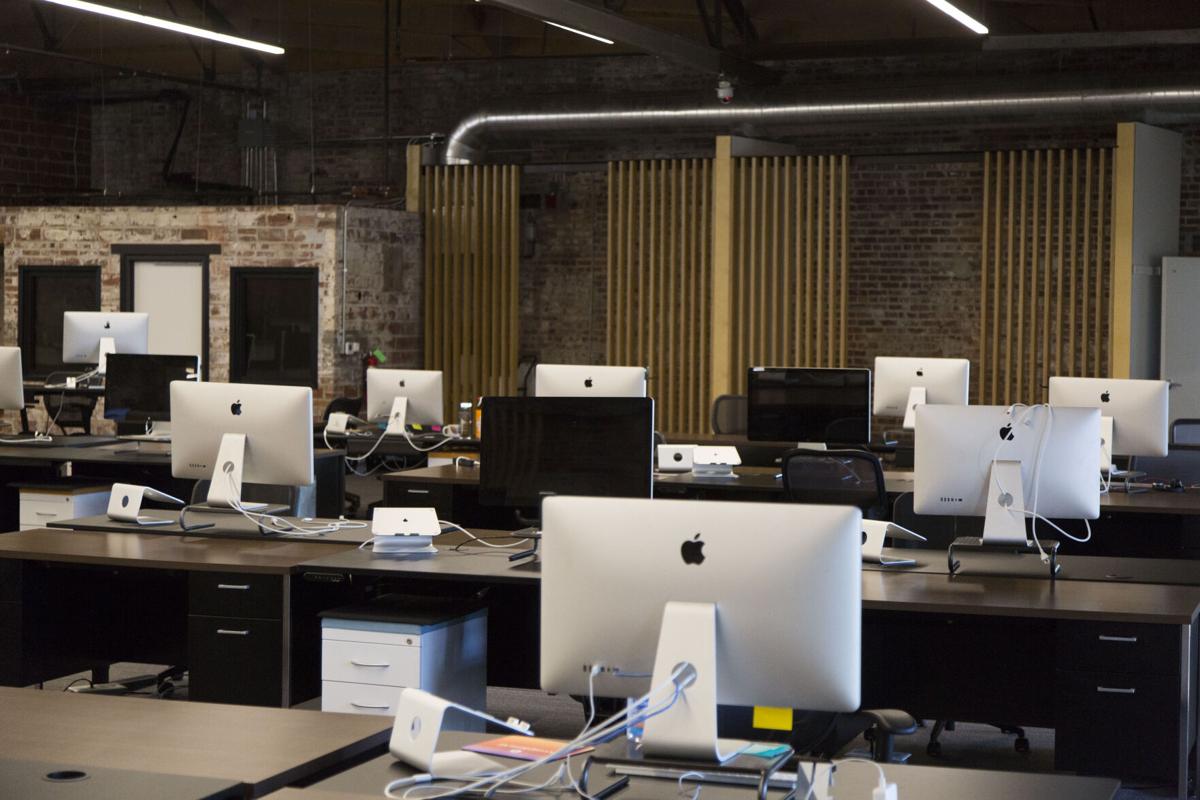 ConsumerAffairs will be the sole tenant in a recently completed historic renovation in the East Village.

Housed on three floors in the Petroleum Club building, local digital media company ConsumerAffairs was seeking a way to level the work environment.

It found it in a historic renovation.

Eye-catching and massive, the firm’s new environs are a $13.2 million, 44,253-square-foot redevelopment of four buildings in the 600 block of East Fourth Street.

“As we were growing and being on multiple levels in the same building (floors 14-16), we realized that is a limiter to collaboration,” said Daniel Brauer, ConsumerAffairs’ head of product.

“We loved the idea of having a single, contiguous space where we could have all employees in the same place. We like to be able to have that area for a collaboration to happen. It’s a rare space to be able to find.”

Zac Carman is CEO at ConsumerAffairs.

“We didn’t appreciate at the Petroleum Club truly the way space influences people,” he said. “So, if you were on (floor) 14, you might as well be in Austin (Texas).”

The refurbishing was spearheaded by Carpathia, a partnership of Tulsa developers Ross Group, headed by Warren Ross, and Nelson-Stowe, with principals Elliot Nelson and Casey Stowe.

The developers share a passion for historic preservation. In fact, the newest project is similar in scale to the old International Harvester building (about 37,000 square feet), which Ross Group made into its downtown headquarters in late 2015.

“It played a huge key in getting comfortable and understanding the leasability of it,” Ross Group Vice-President of Development Ross Newman said of having the company’s base as a template.

“It (historic preservation) has been a driving force with Warren when we decided to move into downtown and really make a presence for our company. It’s one that we see as an excellent way of recruitment for ourselves, and through that whole process, we just really fell in love with old buildings …”

The structure formerly housed aerospace firm NORDAM and before that a cabinetry and furniture business that dates back close to a century, Newman said.

The aim “really was trying to leave — and this was really driven by the tenant — as much of existing interiors in place as possible,” he said. “You will see a lot of exposed brick, years and years of painting and some of the graffiti and other markings left by the previous tenant. They remain just to kind to give that character of what the building used to be.”

The floor features a wide-open layout with brick columns throughout a portion of the footprint. In the middle of the space is a common area with a kitchen and market, as well as a gaming section with a punching bag and tables for foosball and ping-pong. Clear garage doors and white boards adorn some of the conference rooms.

W Design, of Tulsa, was the architect for the interior, Oklahoma City-based Mass Architects oversaw the exterior renovation. State and federal historic tax credits are being used in the rehabilitation, which also is in a tax increment financing (TIF) district, Newman said.

“The other benefit of the way we have set up this space is that it can help facilitate the entire company coming here for a period of time even if they are never in Tulsa until that period,” Brauer said. “We can house them for a training or we can house them for an all-company gathering in a way that most spaces couldn’t …”

All 100 of ConsumerAffairs’ Tulsa employees — half the firm’s total — are expected to move into the new location when the COVID-19 pandemic relents, Brauer said.

“Once vaccines are out there, we hope that we’ll have everybody come back.” he said. “What we see in our employee population is we all miss that. You have to work with a little extra empathy when everybody’s working from home, especially if you have kids, and we have lots of young parents. It’s been a lot to navigate for them.

“I’m sure we would all love to come back to the office and experience that again, hopefully soon.”

Here are 100 things to experience in Tulsa

Here are 100 things to experience in Tulsa

1. Visit the cloud sculpture before it's gone

2. Drive up and see a double feature at Admiral Twin Drive-in

3. Tour the tunnels under downtown Tulsa

4. Cut to order meat at Perry's

7. Be in the scene at Valkyrie bar

8. Get to know Woody Guthrie

9. Two step in the house that Bob (Wills) built

10. Wolf down some food truck fare

13. Unwind on the Arkansas River

14. Enjoy a piece of baklava at the Tulsa Greek Festival

21. See the sunset in high style

22. Fry bread tacos for all

23. Fill your tray with treats at Pancho Anaya

24. Tour the Tulsa fairgrounds from above in an iconic ride

28. Do the Chicken Dance at Oktoberfest

33. Chow down on Cajun cuisine

34. Go crazy over these croissants

35. Find your new favorite local musician at The Colony

39. Start your day with Daylight Donuts

40. Get your kicks, see the Blue Whale and the Totem Pole Park

47. Who's thirsty for Thursdays at ONEOK field?

55. Dine along the Mother Road

58. Take a trip to India Palace

62. Place a bet on the ponies at Fair Meadows

63. Grab a breakfast burrito at the state's largest farmers market

67. Suds up and sip a beer at University of Wash

70. Learn the story behind the Greenwood District plaques

71. Wait for the worth-it BBQ at BurnCo

73. Experience arthouse cinema at an icon

75. Attend three festivals in one weekend in downtown Tulsa

76. Take a coffee break at DoubleShot

78. Take in the Mother Road Market

80. Lace up and couples skate at Skateland

81. See the sights from the ORU Prayer Tower

83. Volunteer at Iron Gate or another great Tulsa nonprofit organization.

85. Drink where the stars do

86. Feast your eyes on a real moon rock

88. Did someone say karaoke?

89. March along with The Pride

90. Go after the stripers and wipers

94. Go to one of the nation's biggest high school football games

98. Buy a pumpkin and get lost in the corn maze at Carmichael's

99. Stay in the world-class Ambassador Hotel.

100. Experience Lights On at Utica Square

The move and expansion of Tulsa-based subsidiary Limco Airepair, Inc., is expected to add more than 300 jobs.

'The only limits that these kids and adults are going to have are the limits you put on them,' FirsTitle CEO Luke Strawn says.

For the record: Building permits

Listed by owner, tenant or building. This weekly update lists new commercial construction, expansions and enlargements of more than $50,000.

ConsumerAffairs will be the sole tenant in a new, 44,253-square-foot redevelopment in the East Village.

The entrance to the offices of ConsumerAffairs is pictured last week.

The cafeteria at a recently completed redevelopment that will house ConsumerAffairs is pictured last week downtown.

ConsumerAffairs will be the sole tenant in a recently completed historic renovation in the East Village.