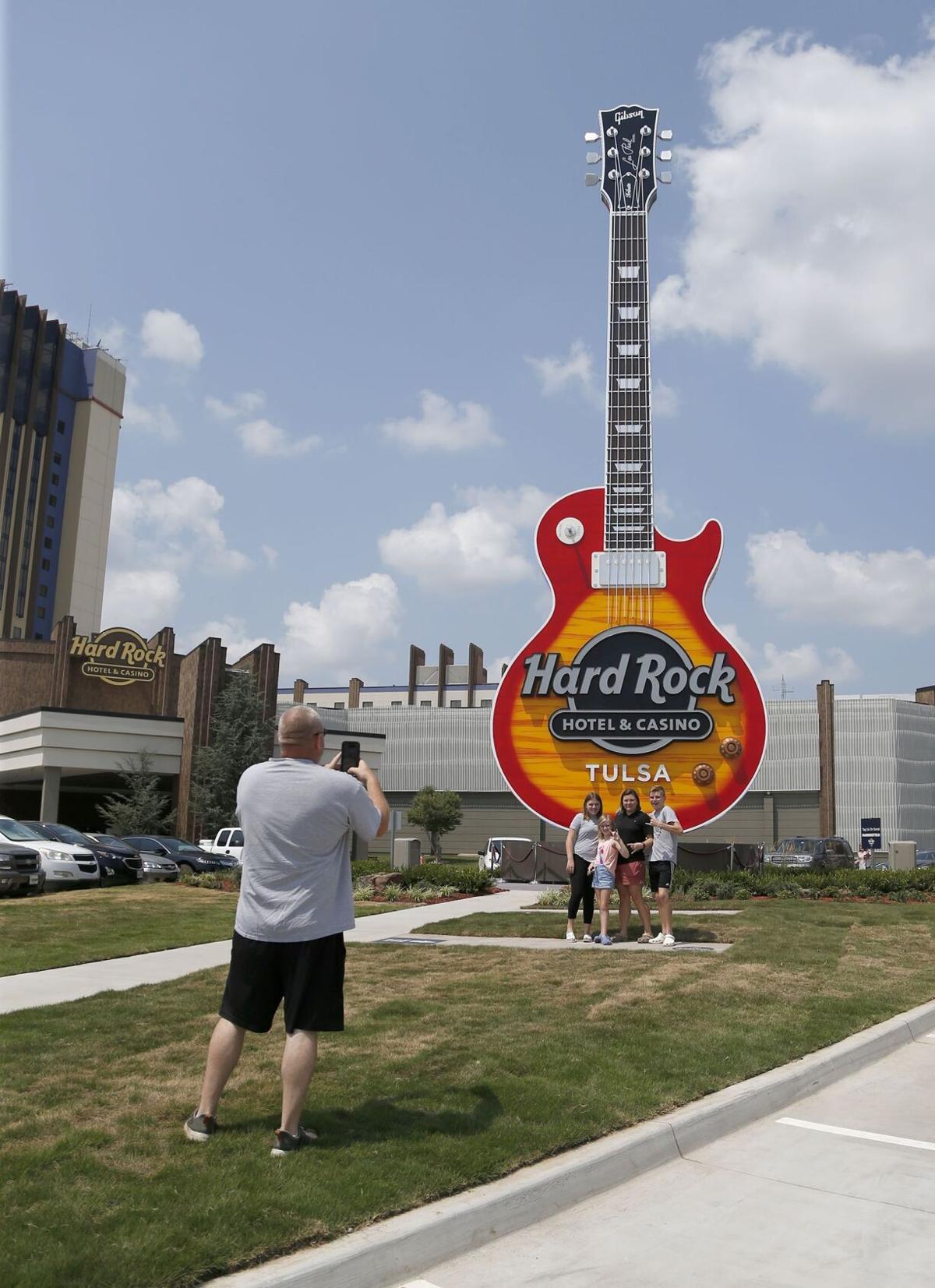 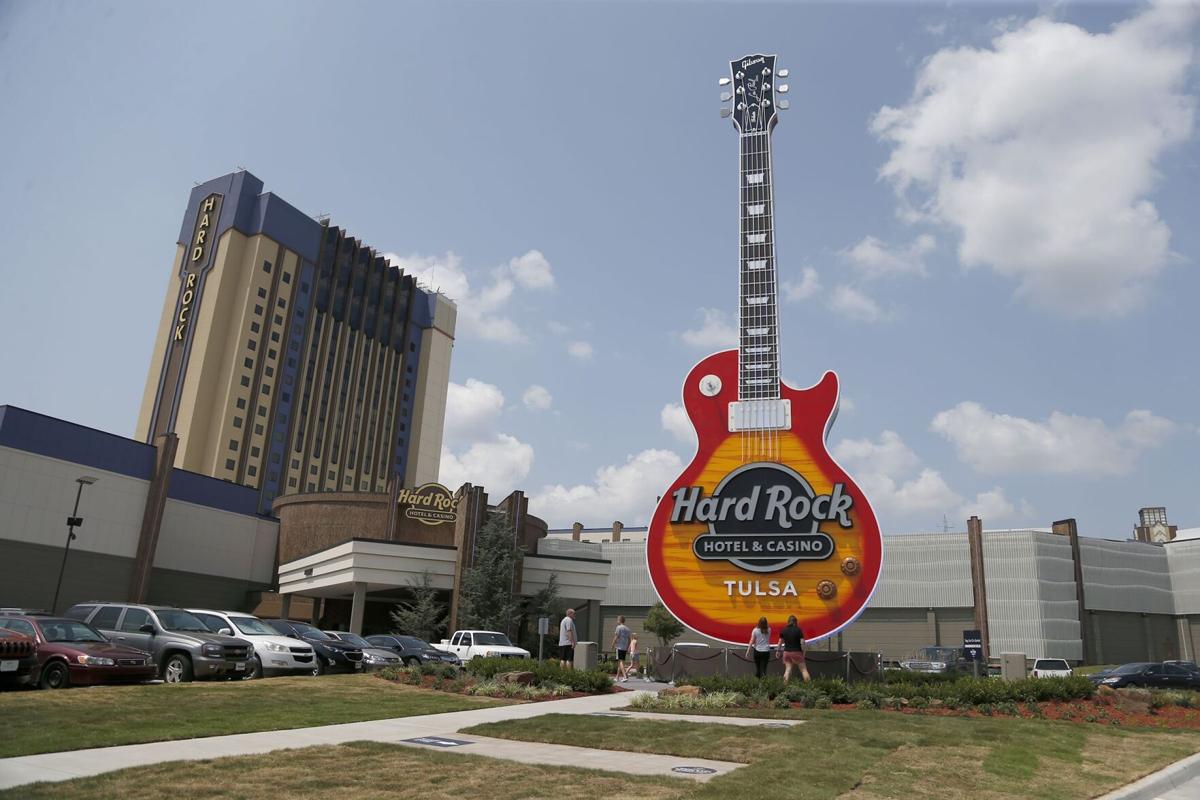 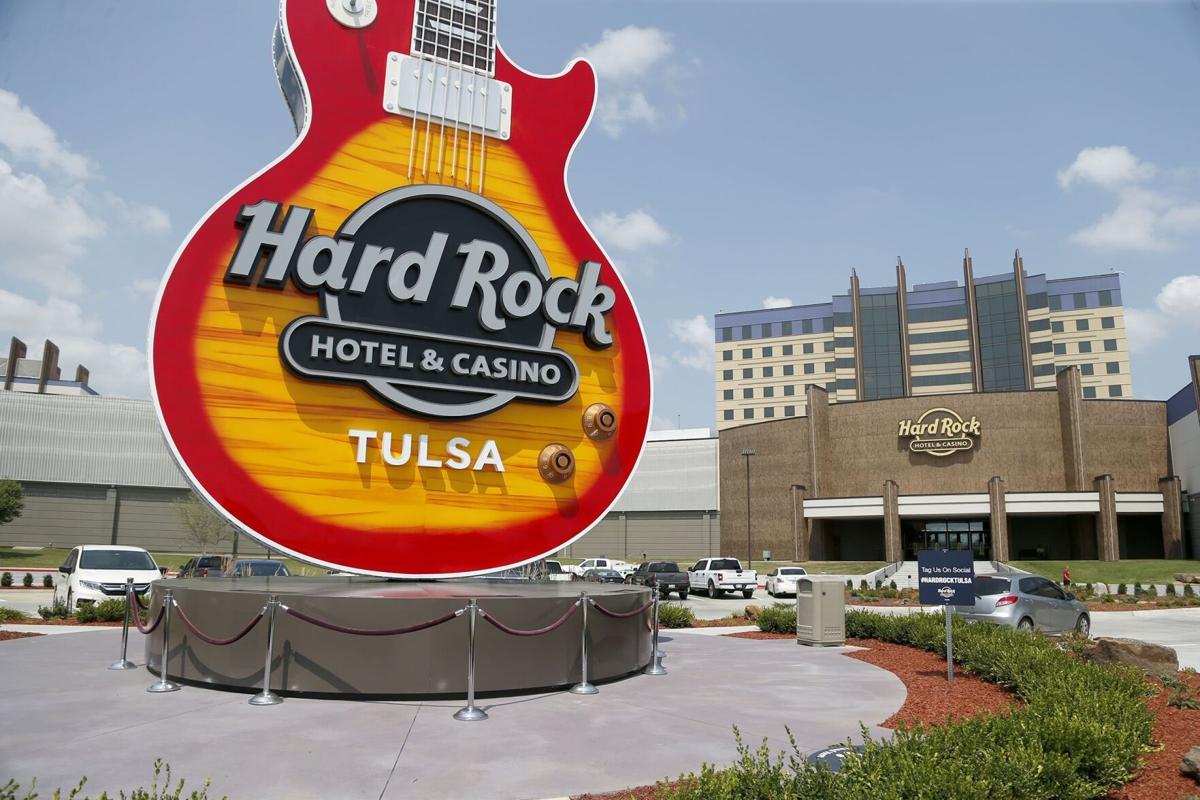 CATOOSA — A spectacular landmark is lighting up the night sky east of Tulsa near Route 66.

A 65-foot replica of a Gibson Les Paul guitar made its debut this week at Hard Rock Hotel & Casino Tulsa. Rendered in Heritage Cherry Sunburst and weighing 9.5 tons, it pays homage to the original Gibson Les Paul ‘50s instrument.

It rivals the height of other state Route 66 attractions, such as Tulsa’s Golden Driller (75 feet) and the 66-foot bottle sculpture at the Pops Soda Ranch in Arcadia.

The Les Paul is equipped with custom, programmable LED lights and will feature nightly sight and sound shows synced to music.

“It’s the perfect time to unveil our Gibson Les Paul and usher in a new era for Hard Rock,” Martin Madewell, general manager for Hard Rock Hotel & Casino Tulsa, said in a statement. “This guitar represents the music that connects us all. It’s a tribute to the hard work of our staff over the years to build an entertainment destination and a Route 66 stop that Oklahoma can be proud of.”

Designed by Stephen Shortell of the sign company YESCO Las Vegas, the guitar monument was shipped to Oklahoma in four parts and arrived in Tulsa in late June, taking a week to put together. Its unveiling coincides with the 50th anniversary of the Hard Rock brand launch in London.

“We’re extremely pleased to have Hard Rock Hotel & Casino Tulsa contribute to the iconic imagery of the Mother Road with its new Gibson Les Paul,” Ken Busby, executive director of the Route 66 Alliance, said in a statement. “The guitar embodies the soundtrack that makes Route 66 so noteworthy, and we couldn’t be happier to have this new addition in our community. It’s a fantastic photo op for Route 66 travelers.”

The Gibson Les Paul sits inside the new Guitar Pick Plaza as the centerpiece of the newest update to the Hard Rock Hotel & Casino Tulsa, the flagship property of Cherokee Nation Entertainment. Exterior renovations are set to be completed in late 2021.

This development follows the 2019 casino expansion that added 65,000 square feet of gaming and entertainment space that includes Track 5, Hard Rock’s country dance hall; a poker room and a multipurpose center.

Local entrepreneur Jonathan Conneely was the featured speaker at the event.

The result would be an increase in electricity prices for the typical residential customer by “just over 1 cent” per kilowatt hour.

Enovation Controls was ranked sixth in the 2021 rankings of small and medium-sized (fewer than 1,000 employees) manufacturing and production companies.

Since late August, the family-owned bank has evolved from a local branch-bank staple to the first in the U.S. to offer customers the ability to purchase and sell cryptocurrencies.