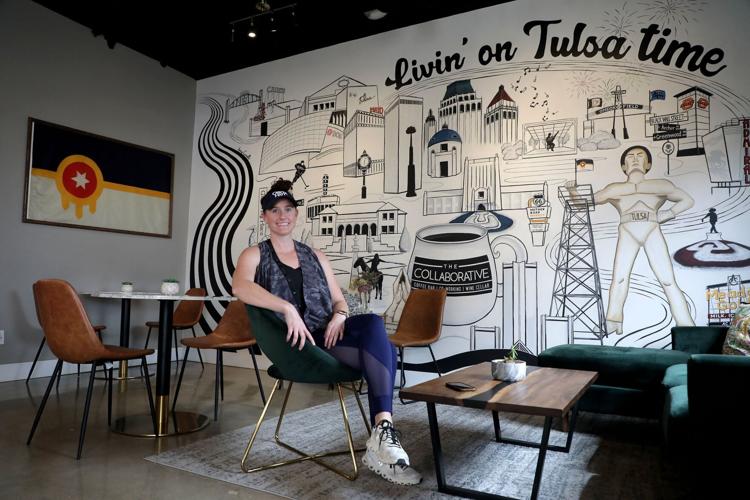 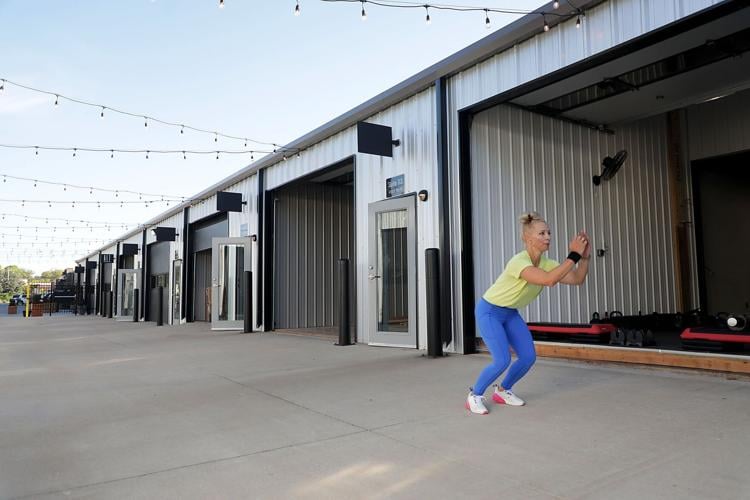 Mahala Mittal works out at Mid-City Strength and Fitness in Alley 51, a development by the Black Gold Group. Sept. 27, 2021 in Tulsa, Okla. 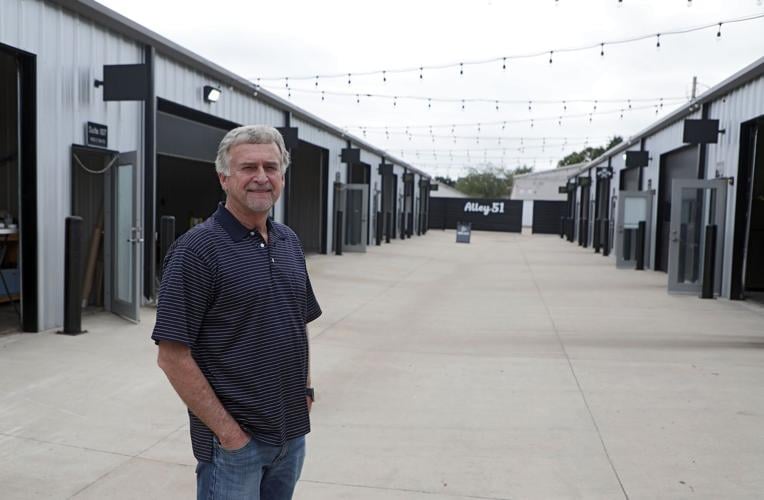 The local Black Gold Group has poured about $6 million into revamping a small retail strip in Tulsa.

And it is just getting started.

The private equity firm two years ago bought the center and the storage units behind the property, which is located near South Yale Avenue and 51st Street, Black Gold CEO Kevin Jordan said.

“We literally de-skinned the old building, knocked out all the walls and started over,” he said of the area that once housed the long-running Green Onion restaurant.

Since that time, Black Gold has landed a 5,500-square foot anchor tenant, Big Whiskey’s American Restaurant & Bar, along with businesses such as Simple Simon’s Pizza and The Collaborative Coffee & Wine Bar. At the rear of the property is the recently branded Alley 51 (4512 E. 51st St.), which houses rentable, 1,400-square-foot suites.

“These were kind of an experiment,” Jordan said. “There was a 70-foot wide strip between these storage buildings of cracked-up concrete with old junk cars on blocks. It was really kind of a mess. So we tore up all the concrete, replaced it and brought the buildings out 20 feet on both sides.”

Sporting glass-accented garage doors and equipped with kitchenettes and bathrooms, the suites — which Jordan describes as ‘man caves’ — can be used for storage or co-working, office, personal or retail spaces.

“If I ever wrote a book about what COVID did for me, COVID probably helped this because people are kind of thinking, ‘OK, I kind of like alternate offi ce space. I kind of like the co-working things going on now.’ ...

“I’d like to say we had kind of a master plan. But it really evolved with usage.”

In Alley 51, businesses offer patrons opportunities like getting fit, buying a fountain pen or participating in ax-throwing. Eighteen of the 20 spaces are rented.

“People are thinking nowadays that I no longer necessarily need an impressive office,” he said. “I need a place where people can come and space out and get a cup of coffee or go work out. It’s really developed a community-type feel. We’re real pleased.”

So pleased that firm has plans for more of the same.

In the works behind The Collaborative is a $3.5 million industrial/office project that will feature air-conditioned, 2,500-7,500-square-foot condominiums for recreational or work use. Construction on the two-story, roughly 30,000-square foot structure is expected to be completed at the end of next year.

Chris Thompson, who had a shop in the area prior to its redevelopment, was the first to rent in Alley 51. The former United Methodist clergyman owns a niche store called Pen and Ink to Paper, where he creates and restores fountain pens and sells ink and stationery.

“It’s really a younger group than most fountain pen enthusiasts,” Thompson said. “…In some respects, I’m out of place there.

“But (fellow tenants) have to walk past my business. From time to time, they stop in and say, `What’s a fountain pen?’ So, I get to do the educating.”

Jon Bash, owner of Ghost Cat Productions, began moving into Alley 51 this past week after having used The Collaborative as a hub for his company since its 2020 inception.

“They were looking for a certain kind of tenant,” Bash said of Black Gold team members. “They weren’t looking just to fill space.

“They wanted young business owners and to create a community of arts. They gave us their vision, and we had already fallen in love with the community and this area. We gave them our interest and our expression to want to be involved.”

The AT-802U Sky Warden plane is designed for airborne intelligence, surveillance and reconnaissance. Its intended use is for close combat support by the Air Force.

Area businesses like C&J School Uniforms and Once Upon a Child are gearing up for Oklahoma's annual sales tax holiday weekend, which starts Friday.

Congressman Hern addresses concerns of manufacturers at round table discussion

Scheduled to be completed in September are a new lobby with a relocated bar and a re-imagining of 20,000 square feet of meeting space.

The funds will allow Ten-Nine Technologies to increase production capacity.

The global oil field service company, based in Houston, employs about 170 people at the Broken Arrow location.

Kian Kamas was named executive director of the Tulsa Authority for Economic Opportunity last year at an annual base pay of $140,000.

The company recently installed a solar panel system to its operations in Tulsa.

A total of 256,273 tons of freight went through the facility in June.

Major credit card mistakes to avoid when times are tough

US economy shrinks for a second quarter, fuelling recession fears

US economy shrinks for a second quarter, fuelling recession fears

Mahala Mittal works out at Mid-City Strength and Fitness in Alley 51, a development by the Black Gold Group. Sept. 27, 2021 in Tulsa, Okla.