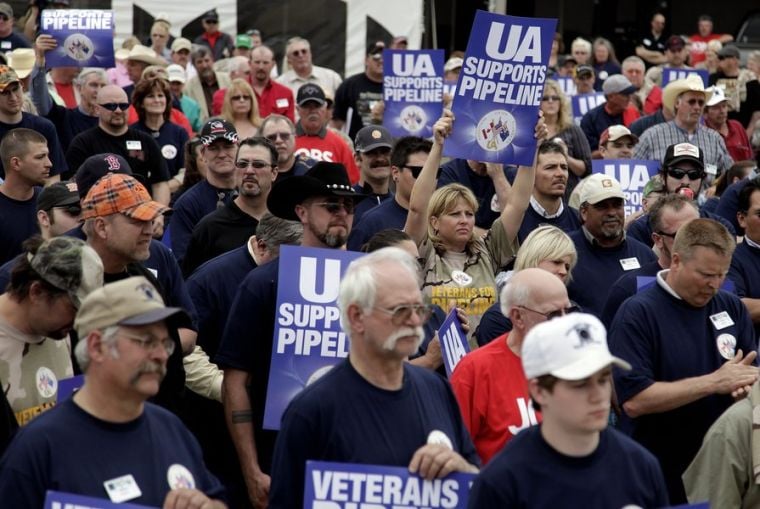 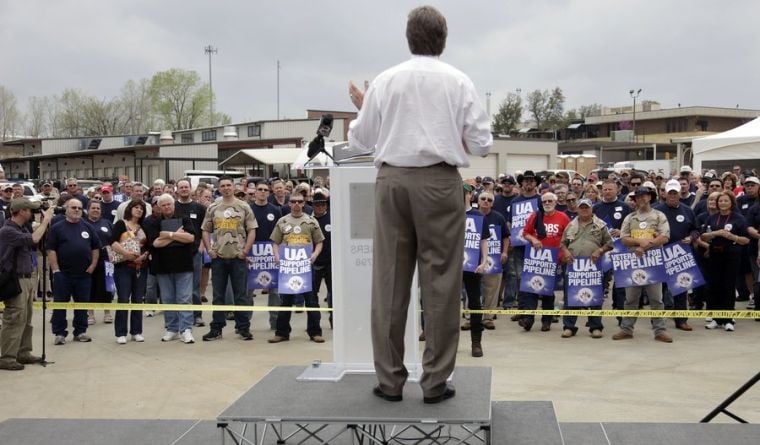 Forces supporting and opposing the Keystone XL pipeline are stepping up their efforts after Canadian tar sands oil mixed with thinning chemicals spilled from a ruptured pipeline into an Arkansas neighborhood recently.

A rally Tuesday at the Pipeliners Local 798 training center in Tulsa drew several hundred welders, fitters and others who cheered on construction of the Keystone XL's southern leg from Cushing to the Gulf Coast. Speakers called the pipeline an economic engine because of the thousands of workers needed to build it and a national security necessity because it allows the U.S. to import Canadian rather than OPEC oil.

"To break it down in the simplest terms, the Canadians will continue to extract oil sands," Danny Hendrix, business manger for Local 798, said at the opening of the rally. "Pipelines are the safest and most economical way to transport that oil."

The Keystone XL, if all its sections are completed, would be a 1,600-mile system bringing crude from the Alberta oil sands across the U.S. through Oklahoma and to Gulf Coast refineries and seaports. The U.S. State Department is still considering permitting for the northern cross-border section, while a middle leg is complete and the Cushing-to-Texas coast stretch is due for operation by the end of the year.

Many environmentalists oppose the project. They argue that the thick bitumen pulled out of the oil sands takes too much energy to produce and also must have a diluent or solvent to allow it to move through the pipeline.

Opponents have protested by various methods all down the line. On Tuesday, a 79-year-old Warr Acres woman, Nancy Zorn, was arrested for trespassing after she used a bike lock around her neck to attach herself to an excavator used in the pipeline work near Allen, in Hughes County, according to reports.

Zorn was released Tuesday afternoon on a $250 cash bond, said a Hughes County Jail official in Holdenville. One of her fellow protesters, Eric Whelan of Oklahoma City, said the diluents mixed with the oil sands crude will inevitably cause leaks in the Keystone pipeline and cut into farmers' livelihoods due to the land damage in the spill areas.

"Our first objective is to slow production down and raise awareness of why people want to oppose the pipeline," Whelan said. "These pipelines will leak no matter what they say."

Pipeline spills are timely topics now due to the rupture of the Pegasus line late last month in Mayflower, Ark. The Exxon Mobil Corp. conduit spilled thousands of barrels of crude in a neighborhood, forcing evacuations and renewing concerns about pipeline safety.

People attending the Local 798 union rally did not flinch from talking about the Pegasus spill. Hendrix said the pipeline was nearly 70 years old and hadn't been maintained or put out of commission due to "greed."

"What happened there was a man-made tragedy," he told the crowd. "It was all because of greed."

In fact, he and other union representatives argued, the nation's aging pipeline infrastructure is a strong reason to build more modern projects such as the Keystone XL.

David Barnett, special representative for the pipeline department of the United Association of Plumbers of Pipefitters, Local 798's international affiliation, estimated that trains or trucks moving crude were four times more likely to spill, while those methods also increased greenhouse gases three-fold. He also took exception to opponents who downgraded the Keystone's $7 billion impact on union jobs due to the temporary nature of the contracts.

"Tell me a job today that's not temporary," Barnett said to cheers at the rally. "We've made a living all our lives off temporary jobs."

Military veterans had a strong presence at the rally, sporting camouflage T-shirts touting "Veterans for Pipelines." Mike Hazard, a Navy veteran who is the United Association's training specialist for a program which prepares service people for careers in union fields, recalled his own experience getting a job after leaving the military.

"I know what it's like to come home and face uncertainty over how to make ends meet," Hazard said, also linking approval of the Keystone XL to geopolitical uncertainties in the oil-rich Persian Gulf and Venezuela. "If the Keystone XL isn't approved, we'll continue to reply on oil from unstable regimes."

Union leaders said they are optimistic that the State Department or President Barack Obama will ultimately approve the northern leg of the Keystone despite an earlier delay. TransCanada Corp., the project's owner, has designed a new route around the Sand Hills in Nebraska after officials in that state responded to residents' concerns about spills.

"It's manifest destiny," said Charles Canty, another military veteran now working as a welder for Local 344 out of Oklahoma City.

A U.S. House of Representtives energy and commerce subcommittee will hold a hearing Wednesday pushing for the Keystone's approval.

Mayor Dewey Bartlett Jr. said he is hopeful that political leaders will not pass on a chance to create thousands of additional jobs and promote energy security nationwide.

"If we don't have that Keystone XL pipeline, we will not have access to a good, reliable supply of crude oil," he said.

Don't get scammed out of your retirement