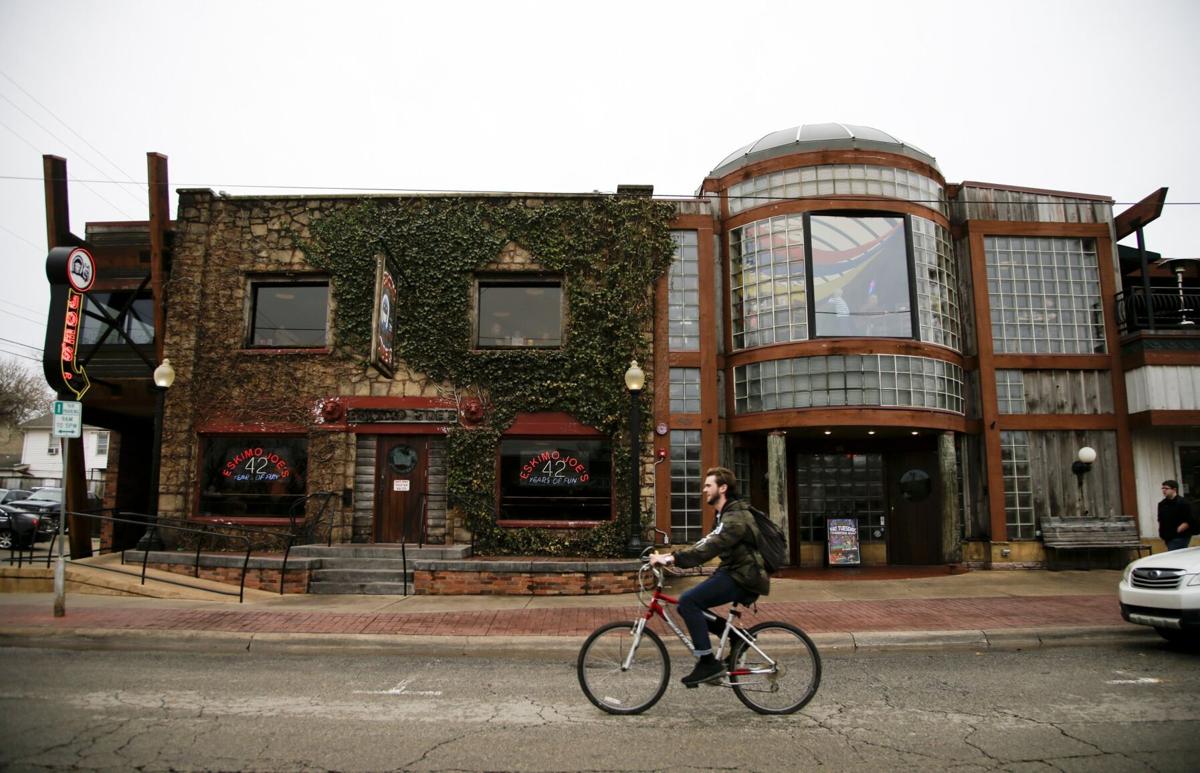 A biker pedals past Eskimo Joe’s in Stillwater on a rainy Monday morning in 2017. The “jumping ‘little’ juke joint” has a long history of success. 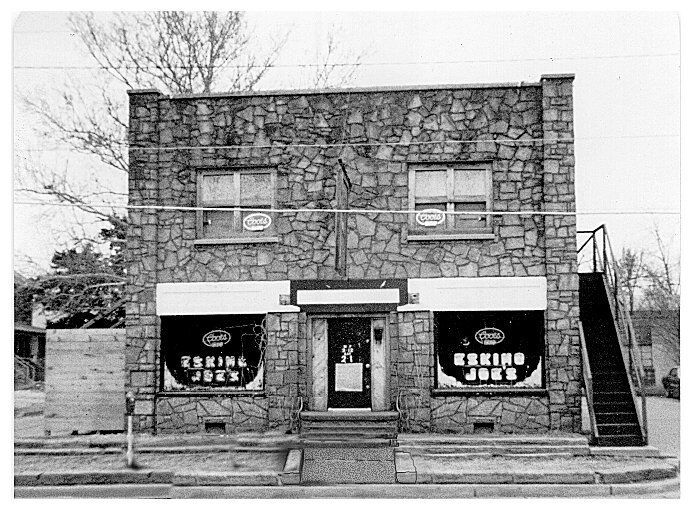 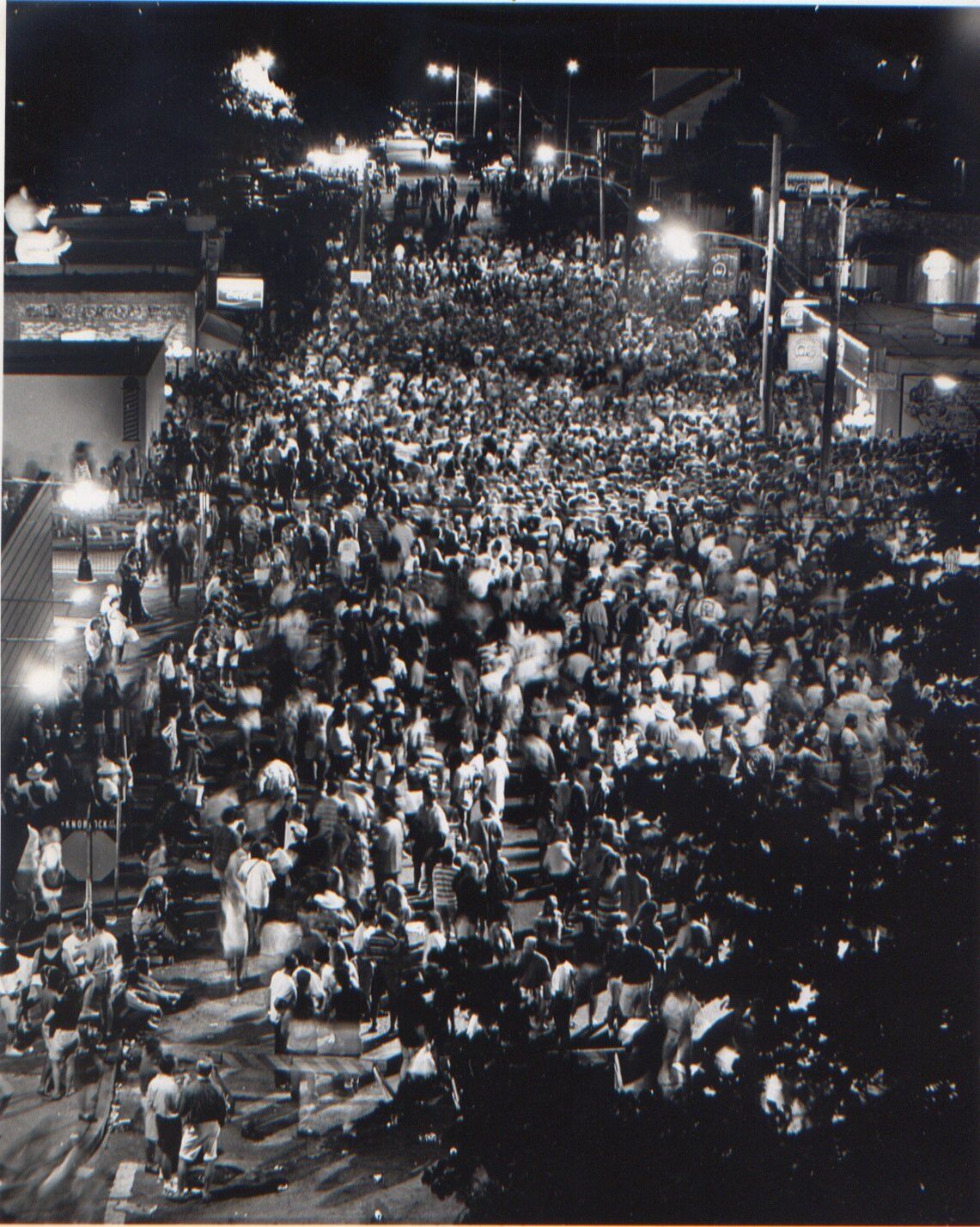 Despite its small-town burger and beer joint origin story, Eskimo Joe’s has reached staggering levels of fame and recognition as it approaches its 46th anniversary celebration.

The weeklong annual celebration has surpassed Joe’s slogan of a “jumping ‘little’ juke joint,” as it draws in thousands of guests annually. But its grandeur is no recent development.

Joe’s 15th anniversary celebration attracted a crowd of 23,000 people — which equates to half the population of Stillwater — and brought an estimated $3 million in revenue to the community. Co-founder and President Stan Clark later expanded the restaurant into Stan Clark Cos., which now generates millions in revenue annually — $6.21 million according to Dun & Bradstreet financial corporation.

“It was kind of a small idea,” Clark said. “We just worked at it really, really hard for 46 years now.”

Clark has earned millions within his alma mater’s ZIP code, and he is committed to giving back. The Stan Clark Cos. donate thousands of dollars in product and volunteer hours to charitable organizations annually. This year marks Eskimo Joe’s 34th annual Juke Joint Jog supporting the United Way, as well as their 23rd year printing a specialty shirt for the Special Olympics, which has resulted in tens of thousands of dollars toward Special Olympics.

“We set a (donation) budget, which we always go over,” Clark chuckled. “But we have a clear path of what we’re all trying to work together to create.”

The Stan Clark Cos. also sponsor academic scholarships at OSU and partner with OSU Athletics. The relationship is reciprocated, as OSU Athletics released a statement Wednesday inviting fans to Eskimo Joe’s to watch the NBA draft and cheer on Cade Cunningham.

Stillwater community member Mechalle Ore has witnessed Eskimo Joe’s transformation into the empire it is today while still holding fast to its roots. She appreciates the way Joe’s gives back to local organizations, such as Stillwater High School’s SMAC week philanthropy.

“Eskimo Joe’s is a gathering place,” Ore said. “It’s not so much the food as it is the atmosphere and the experience. Joe’s has changed and grown along with Stillwater.”

And grown it has.

When mascot Eskimo Joe turned 21 in 1996, Joe’s Artistic Director Mike Staubus told the Associated Press that although Joe might be grown-up, ‘he’s still a kid.’ Now, 25 years later, Staubus still serves as Joe and Buffy’s animator, and he still maintains that belief.

“Joe will always be just a kid, and it’s been my role to keep him that way,” Staubus said. “The success of it is we have become embedded into the psyche of Oklahoma… and we’ve sold a few t-shirts along the way.”

But Joe’s fame has reached well beyond the psyche of Oklahoma. Even U.S. presidents talk about Eskimo Joe’s.

In the 1990 commencement address at OSU, President George H.W. Bush followed up his discussion on NATO and nuclear arms policy by talking about Joe’s cheese fries. Clark, who was in the audience at the time, said he nearly fell out of his chair. Former President George W. Bush made a similar Eskimo Joe’s reference at the OSU O’Brate Stadium opening this year.

This spring, Eskimo Joes became a buzz word in public discourse regarding the political correctness — or lack thereof — of Eskimo Joe’s namesake and logo. Some argued that that the use of the word Eskimo in the restaurant’s namesake and the subsequent cartoonish man himself, Joe, are offensive and demeaning to indigenous Alaskans. Others argued that Eskimo Joe’s name and logo was created in a positive light and that it only aims to spread joy. Clark released a Facebook poll this spring asking people’s opinion on whether or not to change their name and/or logo. The majority said no, and Clark honored that.

Since opening in 1975, Eskimo Joe’s has undoubtedly woven itself into the fabric of the Stillwater community. Continuing its legacy, the 2021 anniversary celebrations will begin in Stillwater on July 19 and continue through July 25. Some scheduled events include a stand-up comedy showcase, karaoke night, and live music. The poster signing is scheduled for 11 a.m. on July 24 after the kid’s carnival featuring free snow cones, face painting and water games. And, of course, sweet-pepper bacon cheese fries will be available all week.

I am a news intern from Oklahoma State University.

Kim Komando: Can cellphones cause cancer? 5 steps to minimize the risk

Over the years, there have been many different studies about the potential health impacts of cellphone radiation, from the earliest models to the latest 5G handsets, with mixed results.

5 mortgage trends to watch for the rest of 2021

Here are housing trends to watch for in the final months of the year. Also, check out more of the week's best money reads from the experts.

The bank plans to open the branch's permanent location by the summer of 2023.

A biker pedals past Eskimo Joe’s in Stillwater on a rainy Monday morning in 2017. The “jumping ‘little’ juke joint” has a long history of success.