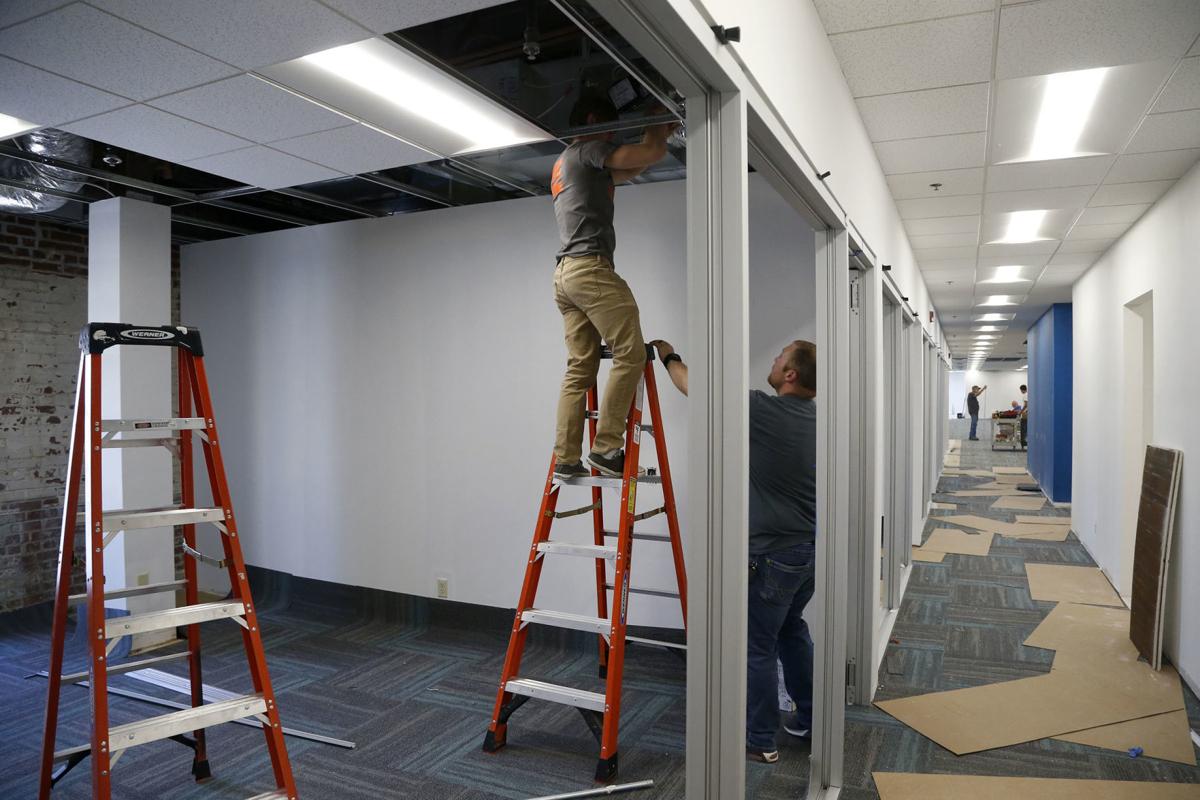 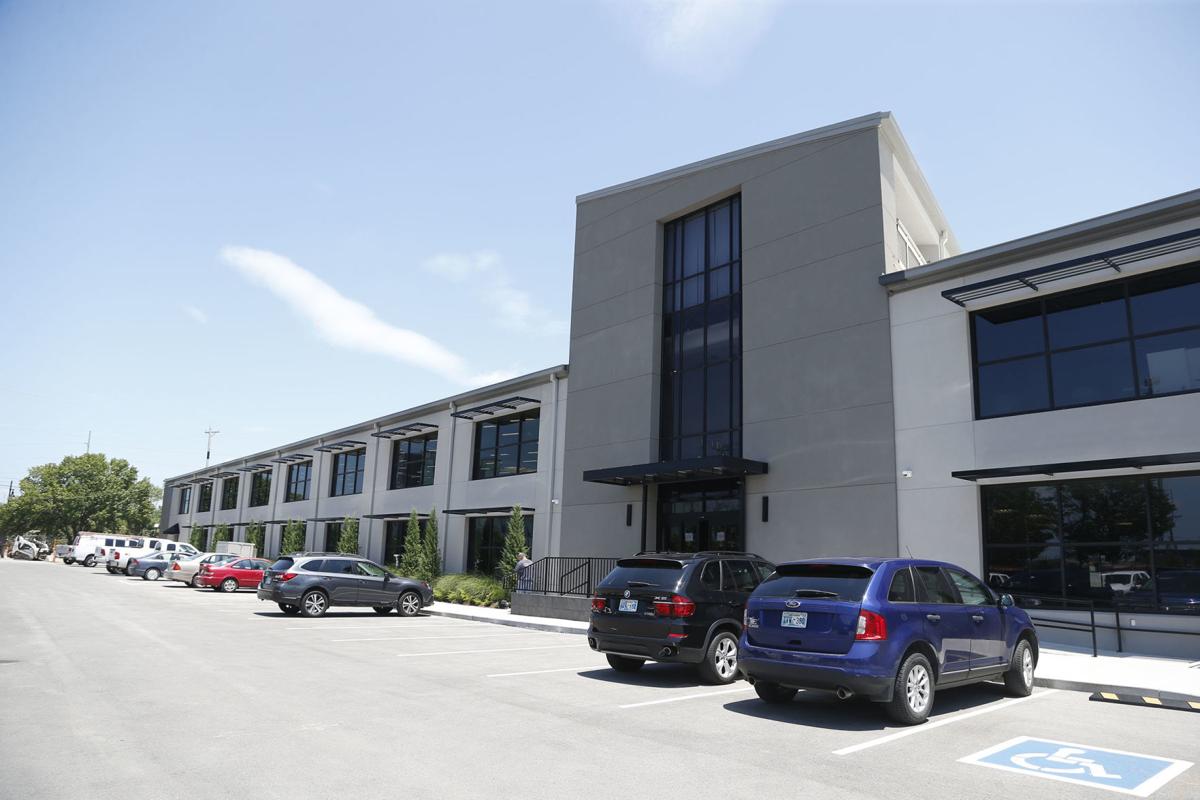 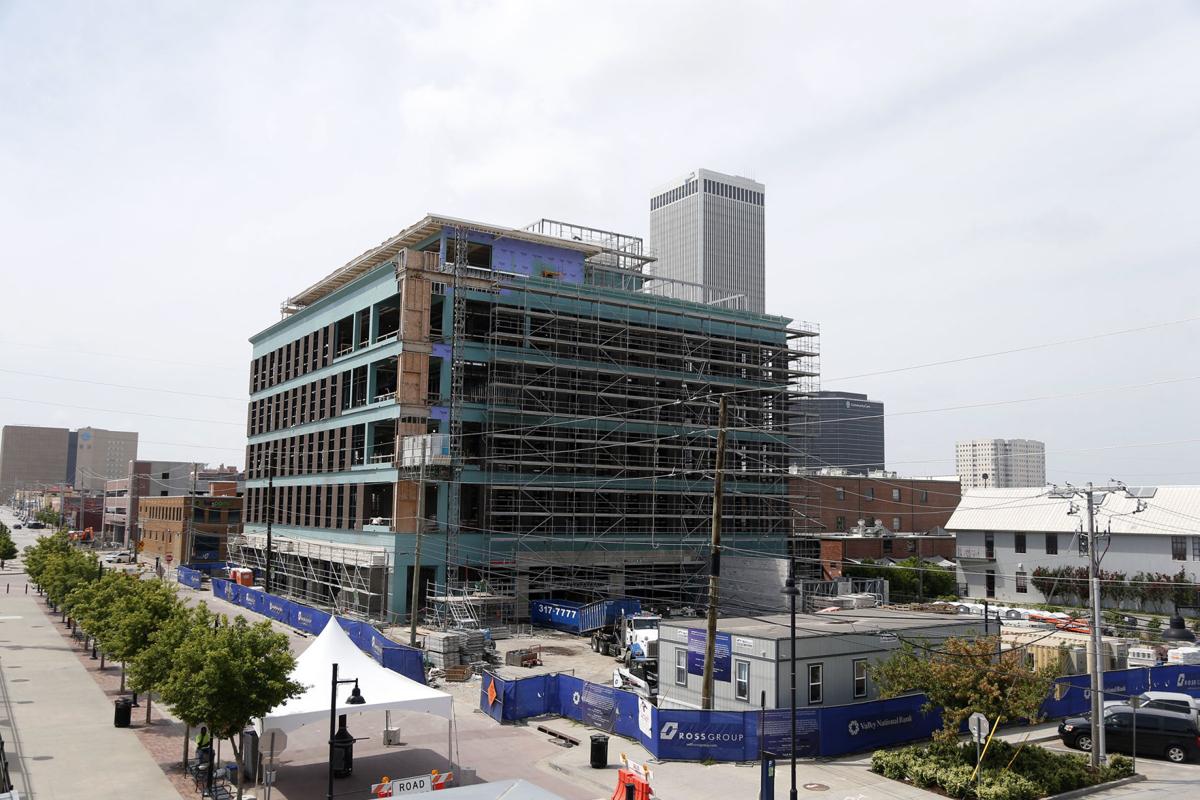 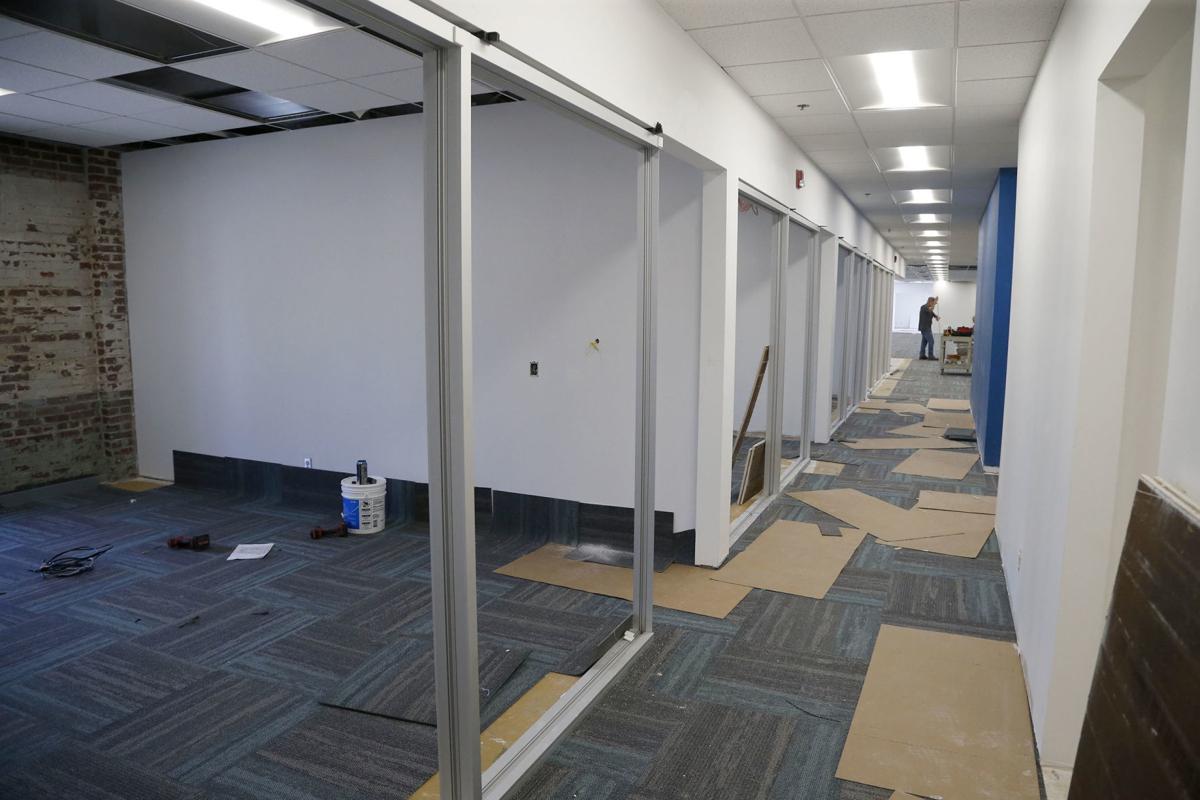 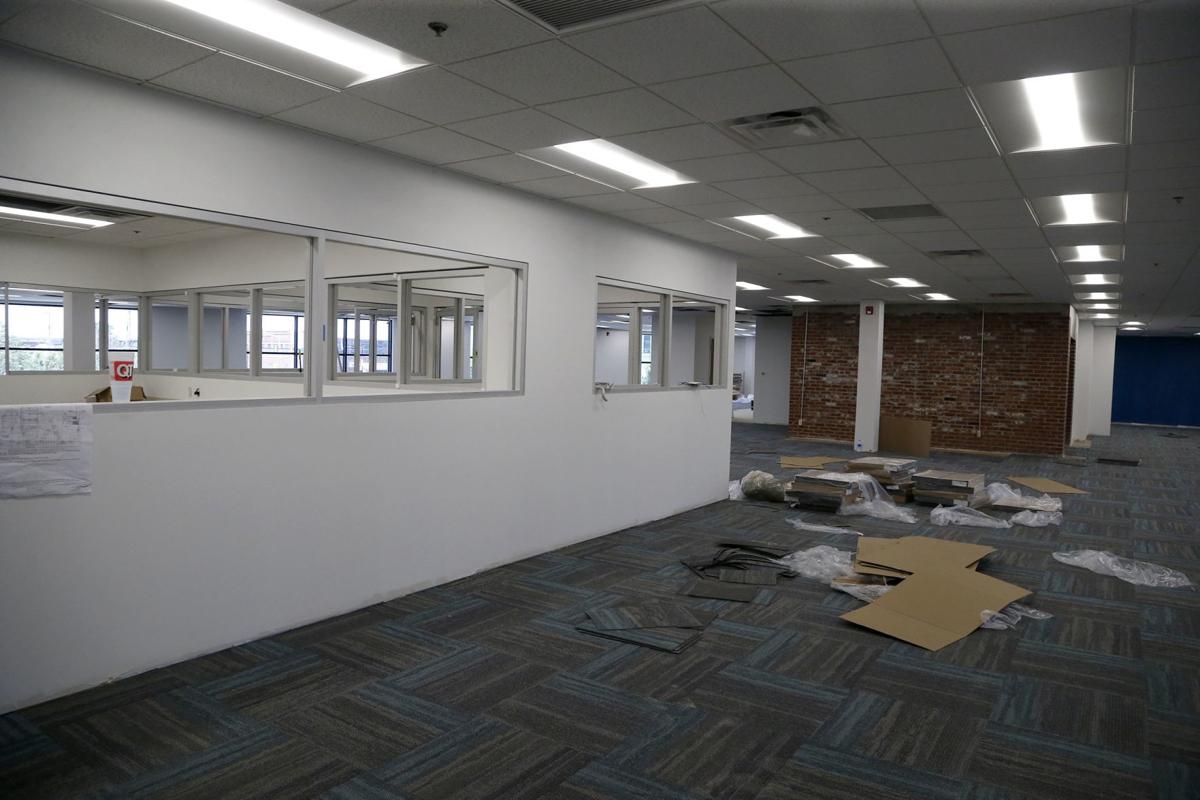 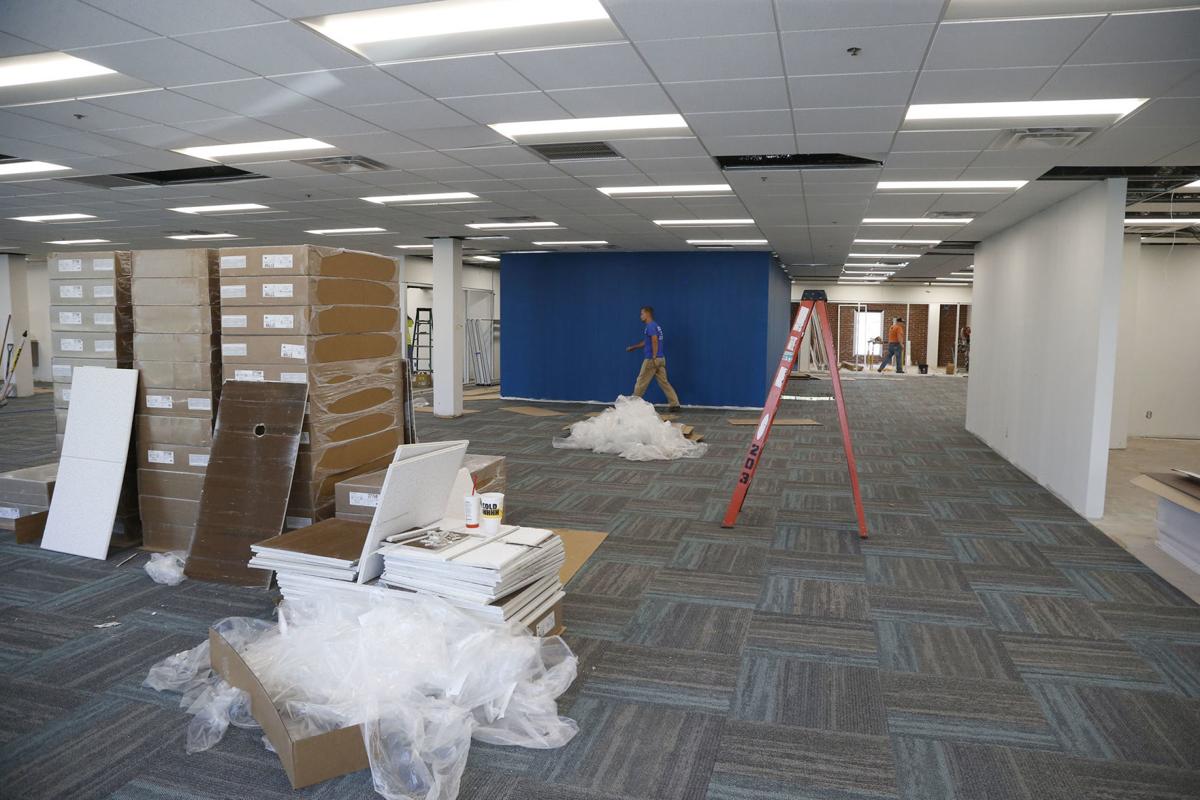 Renovations continue for the Clarion Events space at the Hartford Building at First Street and Hartford Avenue in downtown Tulsa. KKT Architects is designing the Clarion workspace. STEPHEN PINGRY/Tulsa World 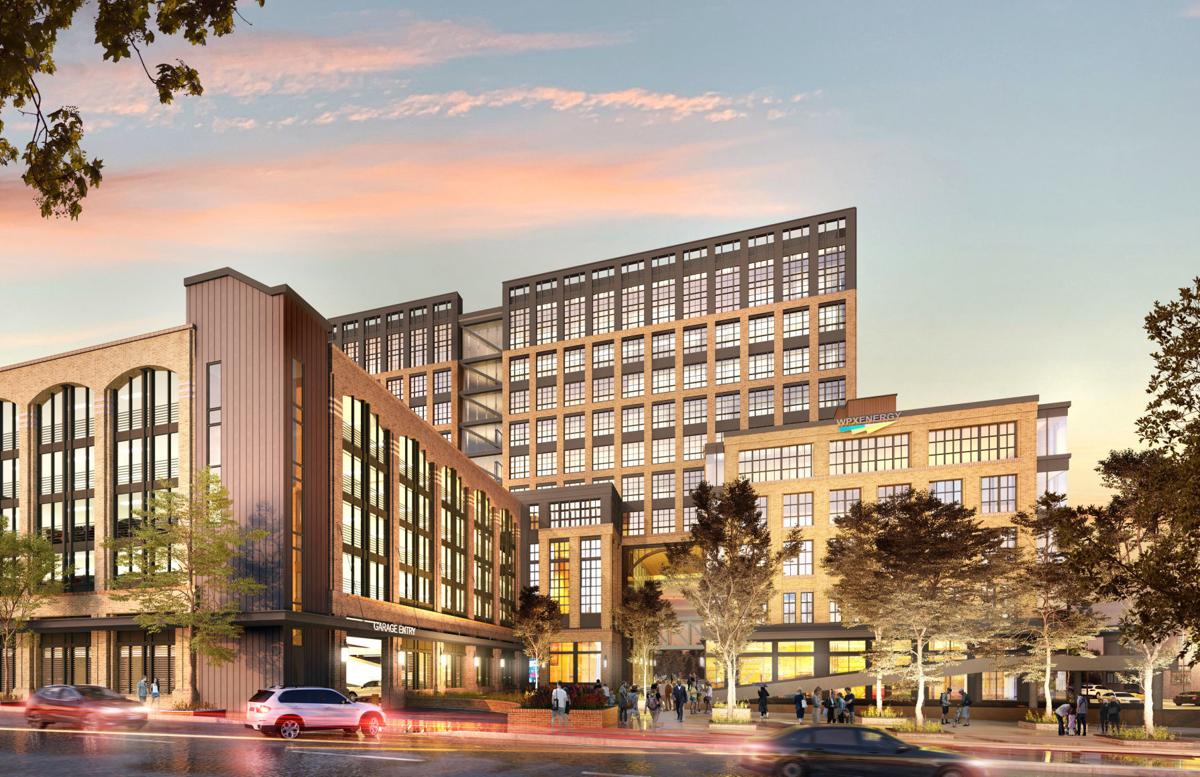 Upward of $133 million in new and renovated office space is in the pipeline in downtown Tulsa.

The influx is no accident, experts say.

“With the limited amount of larger blocks of space, tenants are looking for new, creative, collaborative environments that a lot of the existing buildings don’t provide, whether it is large floor plate or character in the building,” says Bob Pielsticker, first vice president of commercial real estate services company CBRE.

WPX Energy last month unveiled plans to build a new $100 million, 11-story headquarters on the block of property formerly occupied by Spaghetti Warehouse. That news came a week after two businesses announced they had found homes in more than 43,000 square feet of renovated space in the revamped Hartford Building, 110 S. Hartford Ave.

In addition, Vast Bank and a handful of other office tenants are expected to set up shop by December in a six-story, $33 million building at 110 N. Elgin Ave.

“WPX, obviously, they have their own identity in their new building, and they will be able to design a functional building that meets their needs versus trying to work with an existing structure,” Pielsticker said. “The Vast Bank is similar in that tenants can design their space. They will be located in a vibrant area of the city that will help them attract employees.

“It’s no different than what we’re seeing in other major markets. Tulsa just unfortunately has a low existing rental rate that traditionally attracts tenants to stay and save money versus paying a 30% to 40%, sometimes 50% higher rate, to being in a new and exciting product.”

About 80% percent of the Vast Bank building will be dedicated office space, said Doug DeJarnette, Vast’s director of commercial and private banking.

“I think we’ll continue to see more of this,” Pielsticker said. “This is kind of the kindling on the ground. It’s going to force existing landlords to spend capital on their buildings to compete. We’ve also been involved with several redevelopments where we’re taking the existing ceiling grid out to try to get back to the original bones of the building. The 8:10 Building is a great example.”

In 2015, Cyntergy became the first tenant to move into 8:10, which underwent a transformation after being purchased by First Presbyterian Church a couple of years earlier. Now 100% percent leased, the building in late 2017 welcomed Ingredion, a global ingredients solutions firm that looked at more than a dozen cities before placing its shared service center in Tulsa.

“The landlords that take the steps to be a little bit more aggressive to modify their buildings to this collaborative work space are going to win new tenants,” Pielsticker says.

Another such example is the Hartford Building, 110 S. Hartford Ave.

Developer Neal Bhow and his family last year finished about a $7 million renovation of the 74,000-square-foot structure, which had been unoccupied since the city of Tulsa moved offices from there in 2008.

“They did a very nice job with the renovation of that building,” Pielsticker said. “It’s an open plan. They punched windows in.

“Once again, it’s down in the core of an area where employers are going to be more capable of hiring and keeping a millennial workforce that wants access to the live-play-work environment.”

The refurbishing paid off this summer with the announcement of the first tenants in the structure. Clarion Events, formerly PennWell, is moving into a 24,500-square-foot space, and co-working space The HQ Tulsa will occupy 10,800 square feet, with both leases on the second floor.

“It’s obviously a unique building in exterior form,” said Francis Wilmore, design director at KKT Architects. “The interior space was really a blank canvas. We’re leaving all the brick exposed on the inside.

“They really wanted to keep that open office feel, with a lot of different collaborative and break-out spaces. We even designed an area for a ping-pong or pool table.”

Businesses are demanding that their work environments meet the changing needs of their employees. To that end, many are incorporating into offices “hoteling” stations, a work area for someone who does not have a permanent office space, Wilmore said.

“Multi-function spaces are a huge trend,” he says. “A space just can’t be used for one thing anymore. One day it might be set up for a team room, and the next day it might be someone’s office space. It is designing the architecture and the furniture to be adaptable.

“From the millennial generation to the 30-somethings that are starting families, they really want that ability to work remotely. If they have to have to pop out of the office to take their kids to school or see a play, they want that ability to be mobile with whatever work they’re doing. Architecturally, that’s a challenge and an opportunity. Before we had to have dedicated 10-by-10 offices. We don’t necessarily need that for each individual person anymore.”

WPX Energy's 260,000-square-foot tower will be built on the block of property where the old Spaghetti Warehouse was located.

Dumb mistakes you can avoid when investing

McDonald's Teams Up With Biden Admin To Promote COVID Vaccinations

McDonald's Teams Up With Biden Admin To Promote COVID Vaccinations

How you can create a steady income for retirement

How you can create a steady income for retirement

Why you should shop small and support local businesses

Why you should shop small and support local businesses

The grand opening for Oasis Fresh Market is Monday morning.

The recently announced sortation center will be the largest non-aeronautical project on airport land in its history.

The drinks come in two variety 12-packs: tropical and citrus.

Why Retirees Are Losing Ground on Social Security

You need to prepare for your benefits to provide less buying power.

Also, check out more of the week's best financial tips from experts at NerdWallet, Forbes and the Motley Fool.

Alexander Tamahn started work on the project Wednesday on Concourse B.

US job openings soar to highest level on record

In Oklahoma in March, there were about 180,000 unique job postings, according to data provided by the state Department of Commerce.

Renovations continue for the Clarion Events space at the Hartford Building at First Street and Hartford Avenue in downtown Tulsa. KKT Architects is designing the Clarion workspace. STEPHEN PINGRY/Tulsa World