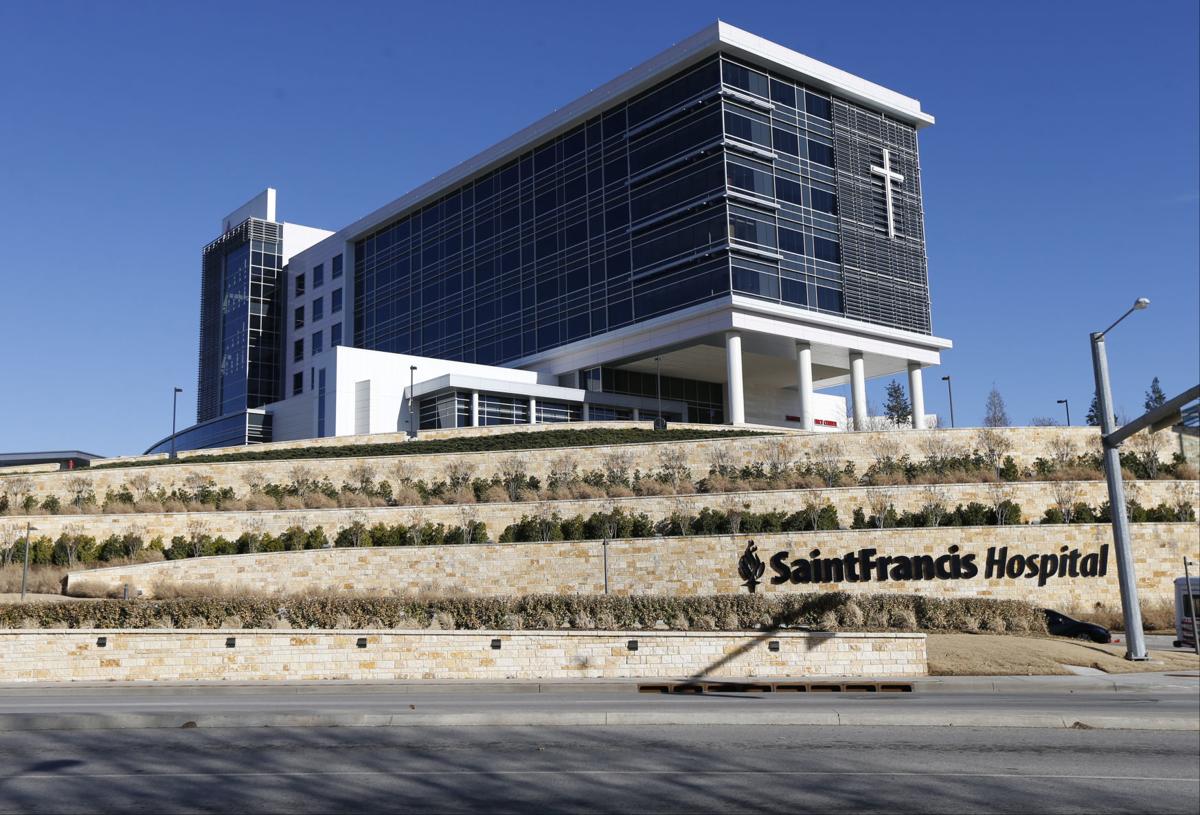 Saint Francis Heath System, whose main campus is in Tulsa, is the largest employer in the Tulsa MSA. 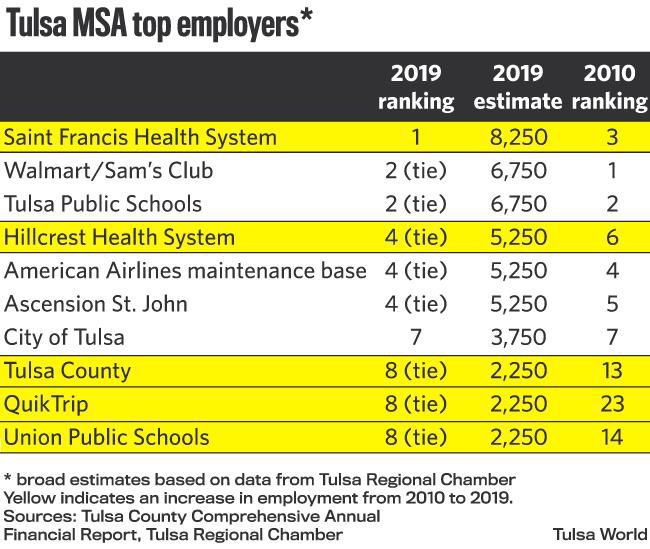 “What we tell these companies when we recruit them is that we’re not looking to date you, we’re looking to marry you,” said Mike Neal, president and CEO of the Tulsa Regional Chamber. “When we land a project, we say this is a marriage. We’ll be together through thick and thin. If you have problems, we’re here for you. If we have problems, we hope you’re here for us.”

Many local firms have shown they’re here for the long haul, a fact reflected in the numbers.

The top 10 employers in the Tulsa Metropolitan Statistical Area (MSA) in 2019, as listed in the Tulsa County Comprehensive Annual Report, account for nearly 10% (9.86) of the MSA’s employment. Three health centers, led by Saint Francis Health System at No. 1, are in the top 10, along with two educational systems: Tulsa Public Schools and Union Public Schools.

To arrive at its list, Tulsa County used broad estimates based on data from the Tulsa Regional Chamber.

American Airlines, which announced in 2019 the addition of nearly 600 jobs to its maintenance base in Tulsa, tied for fourth in the rankings. Tied for eighth was Tulsa-based QuikTrip, which last year completed a $39.5 million distribution center.

Employing an estimated 2,250 people in the MSA in 2019, QuikTrip moved up from a No. 23 ranking in 2010, according to Bob Ball, director of economic research for the Chamber.

The Tulsa Regional Chamber spends about $4 million a year on economic development, with 80% of those funds coming from the private sector and the balance from public sector partners, Neal said. While new businesses often generate more headlines, 80% to 85% of jobs of annual jobs come from existing companies through retention and expansion, he said.

“It is far more affordable to take care of the businesses that you have,” Neal said.

With its anchor hospital on a hill in Tulsa, 60-year-old Saint Francis has stayed atop the heap by remaining relevant.

Bettering the 2019 estimates, the Catholic nonprofit, as of January, has 10,409 employees and an annual payroll of $731 million, said Jake Henry Jr., president and CEO of Saint Francis Health System since 2002. Saint Francis opened a new eight-story patient tower and emergency center in 2014 in Tulsa and paid off all debt in 2015.

“In this very changing landscape of health care in America, it’s important to be fiscally viable,” Henry said.

Warren Clinic, the physician arm of Saint Francis, has grown from 329 primary care doctors and specialists to 412 in the past three years, he said.

“That, alone, is a significant boost to the economy,” Henry said. “With every physician we recruit, it’s not uncommon for us to have an advanced practitioner that we assign to aid that position, as well as office personnel. We’re in the process of building new offices for those folks.”

Saint Francis also is the only major hospital with ownership is based in Tulsa.

“Because we’re locally owned and locally governed and our board of directors and board of trustees are all local folk, it lets us make decisions quickly then move quickly to implement those decisions,” Henry said. “Very much what we do here is ground roots up. By all of us living in our communities we’re able to know what those needs are.”

Keeping that commercial engine churning takes a lot of customized hand-holding. That involves getting plenty of face time at places such as out-of-country exhibitions or out-of-state main offices.

“We try to be as aggressive as we can to A, stay in front of these companies and to B, if they are not headquartered here, to see them where they may be,” Neal said.

Closer to home, the Chamber works with the City of Tulsa to create regular engagement with local business leaders and state, federal and tribal leaders to assist with their needs.

70% of Americans Want a Second Stimulus Check. What's the Holdup?

Saint Francis Heath System, whose main campus is in Tulsa, is the largest employer in the Tulsa MSA. 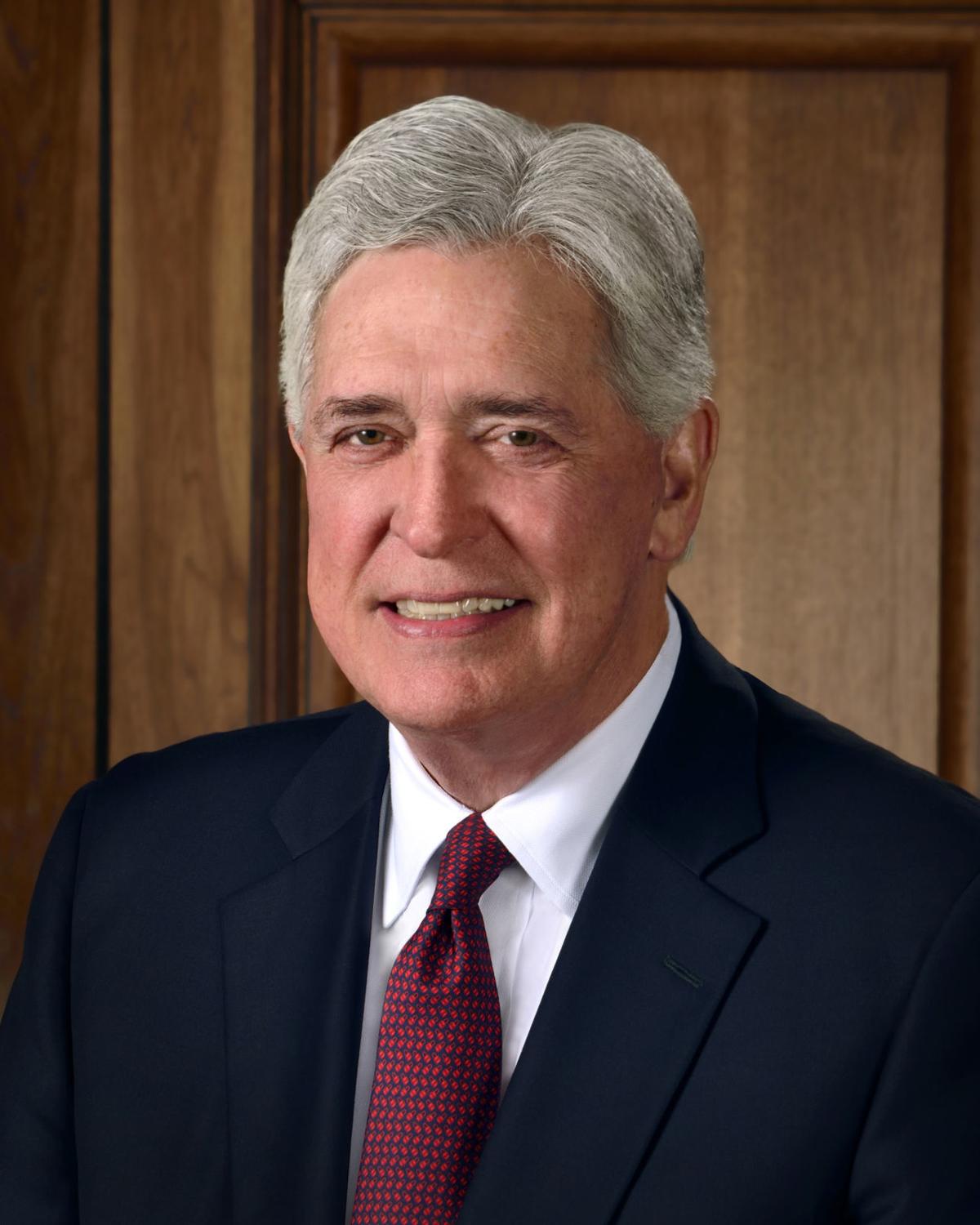