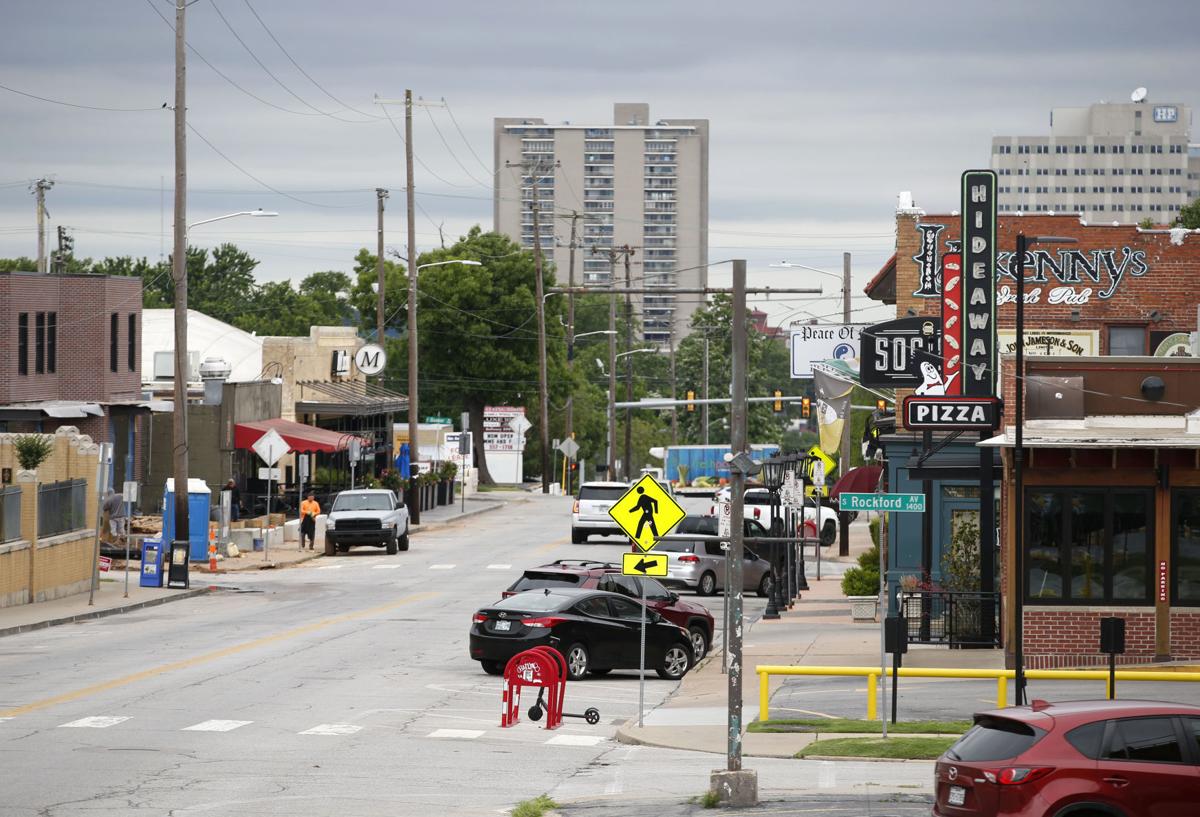 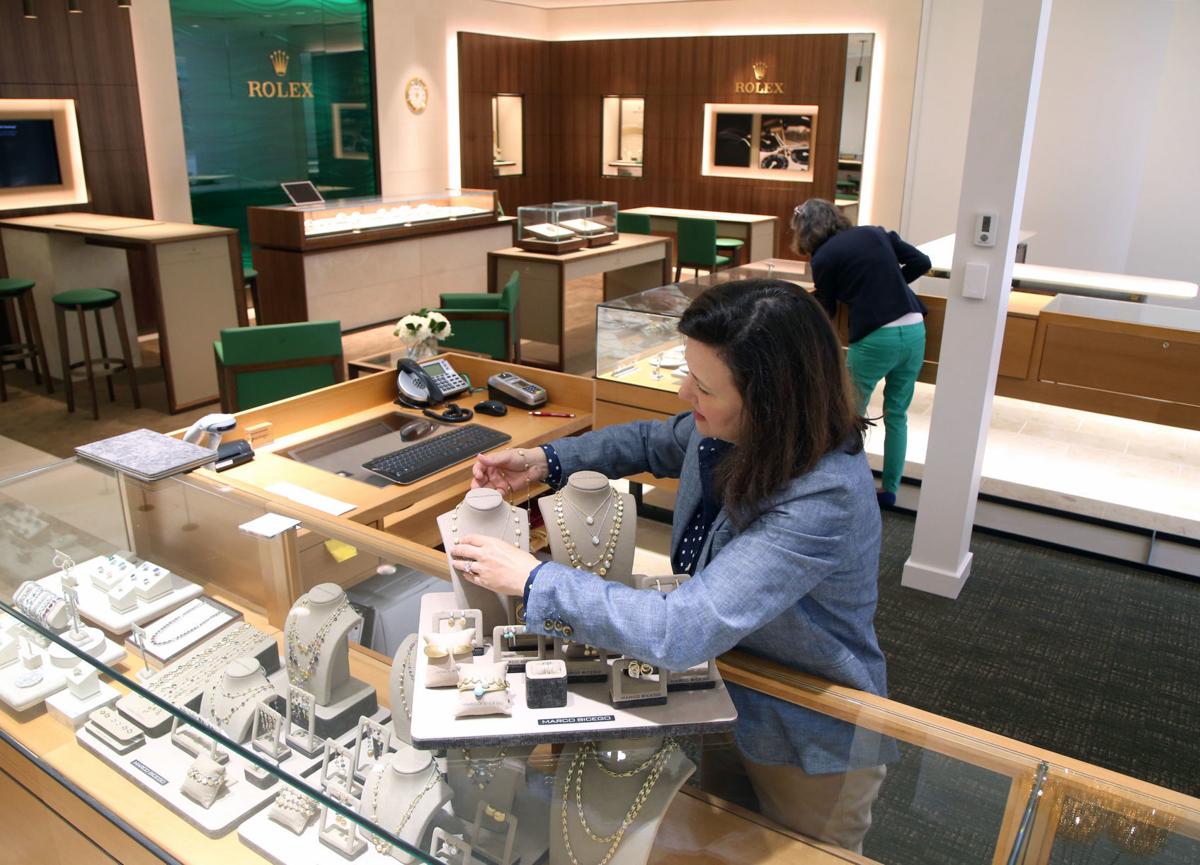 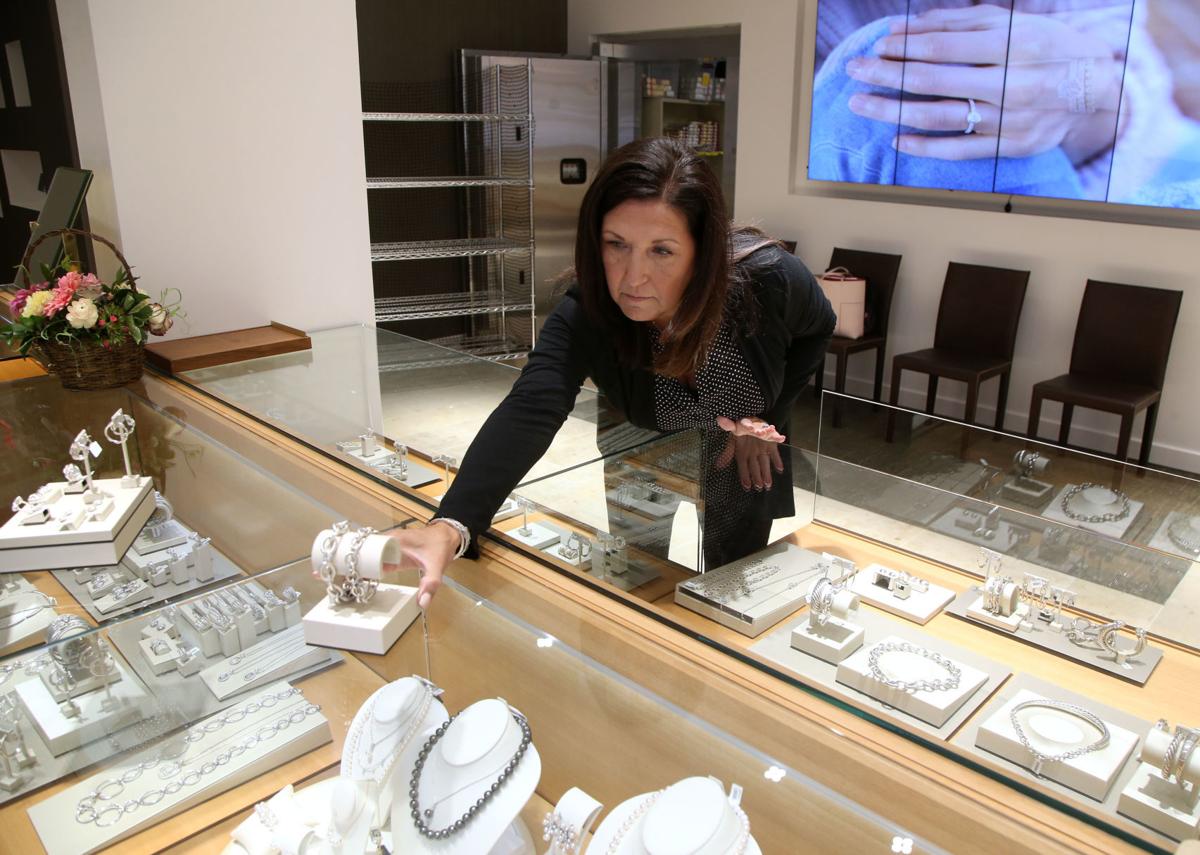 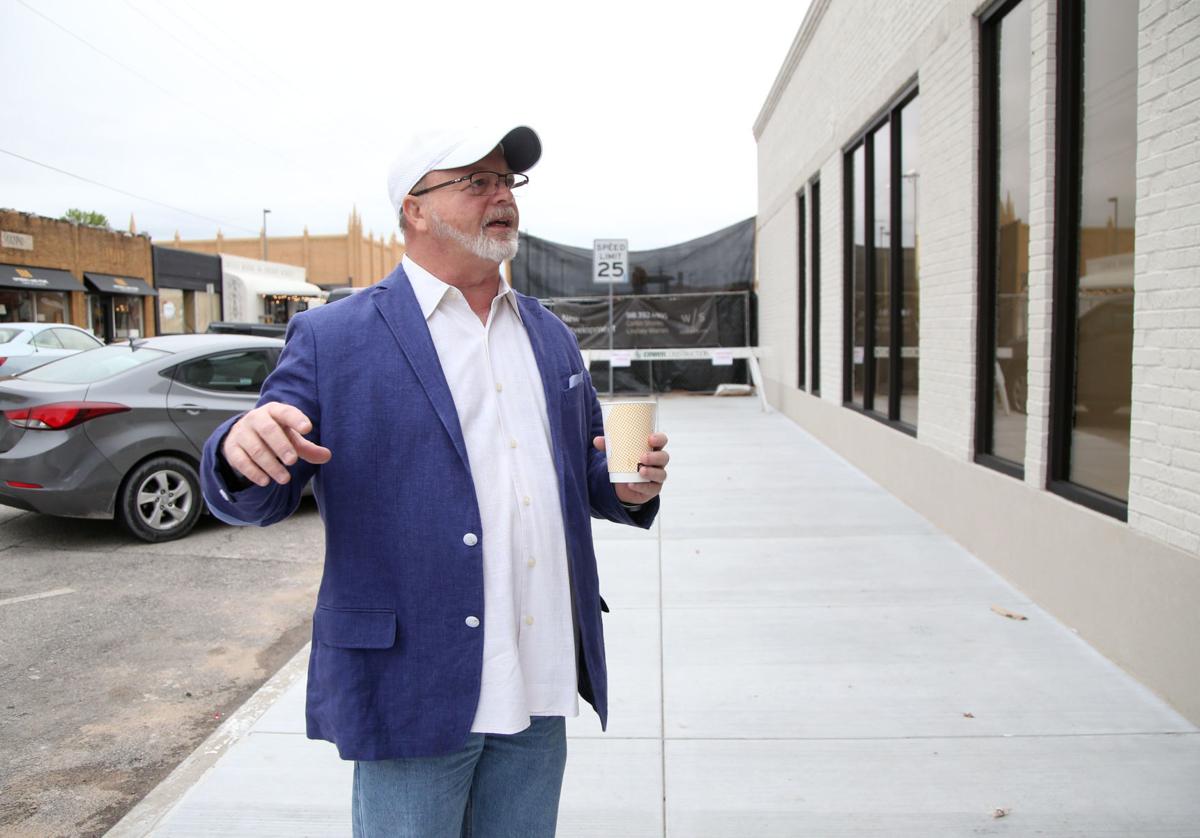 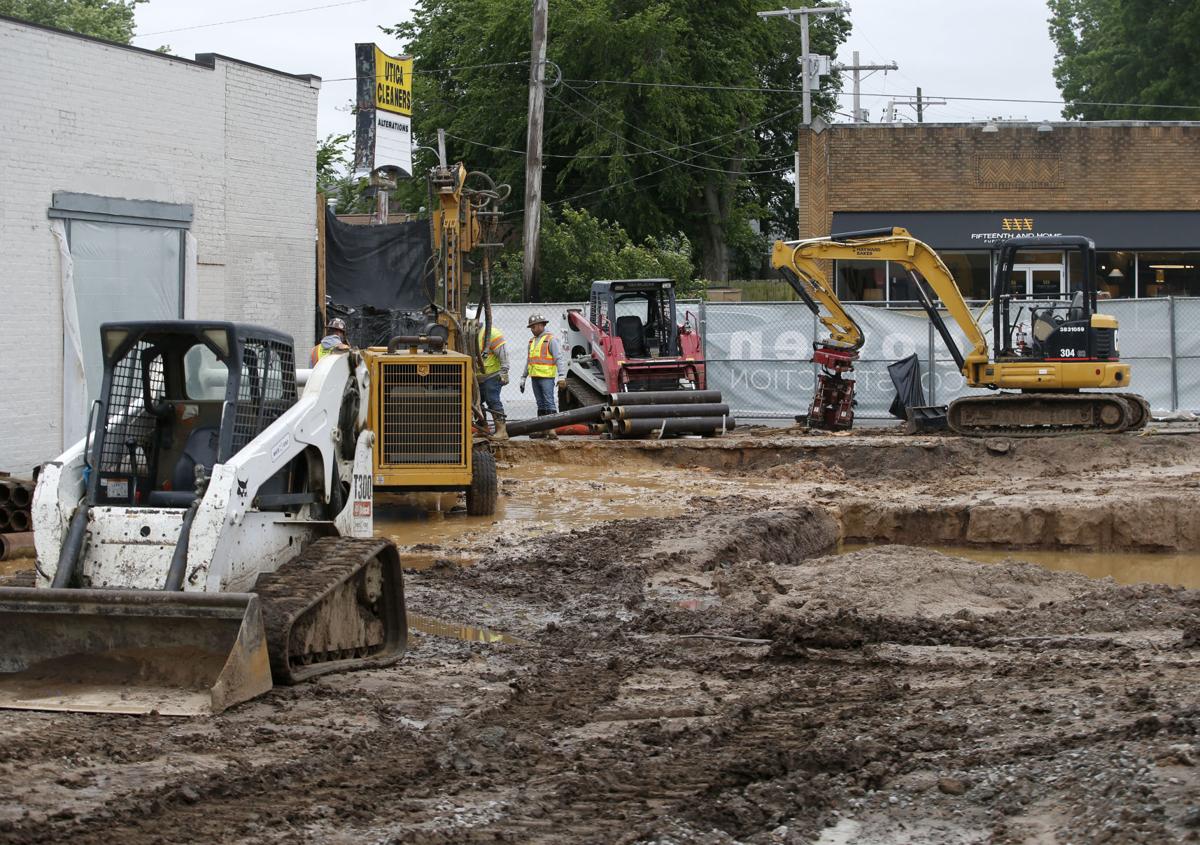 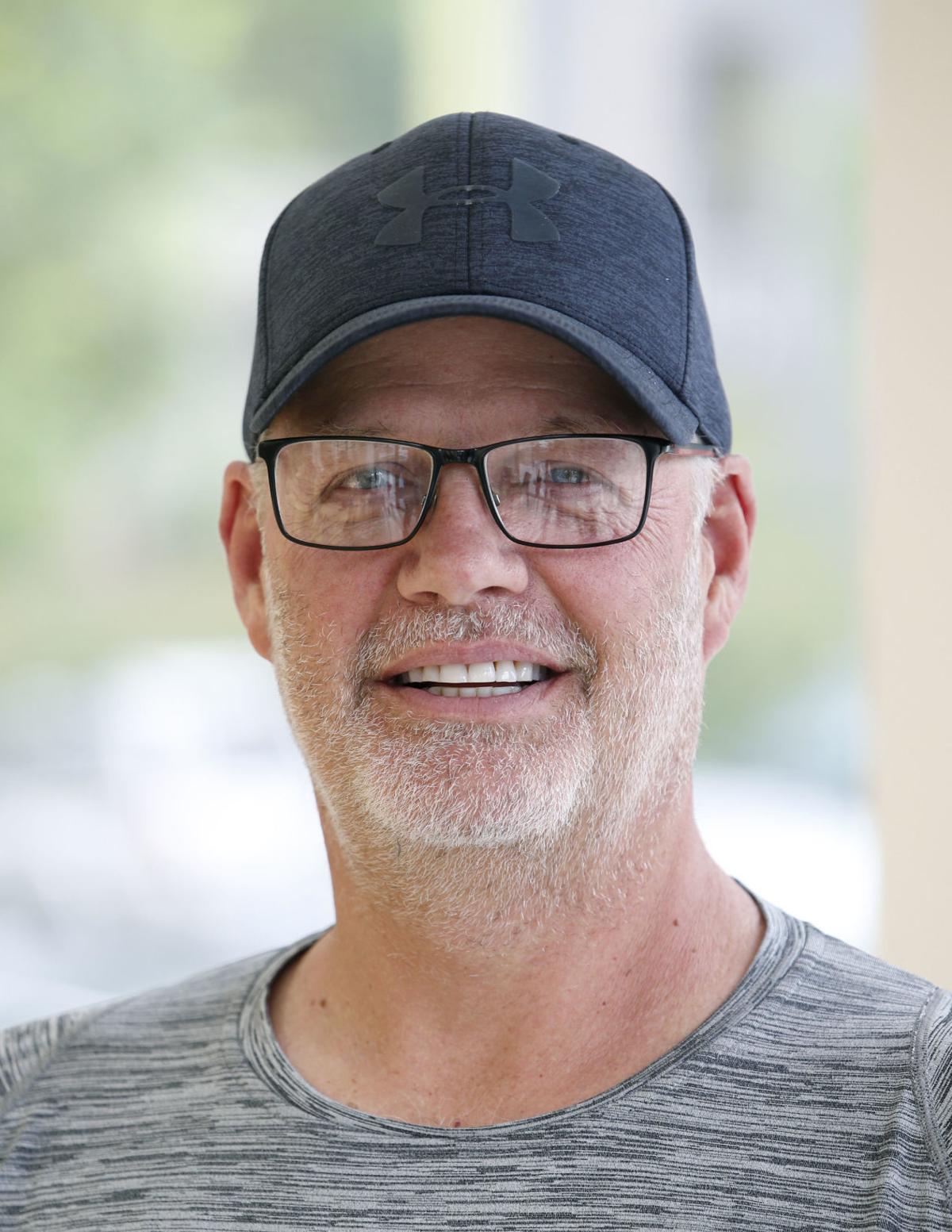 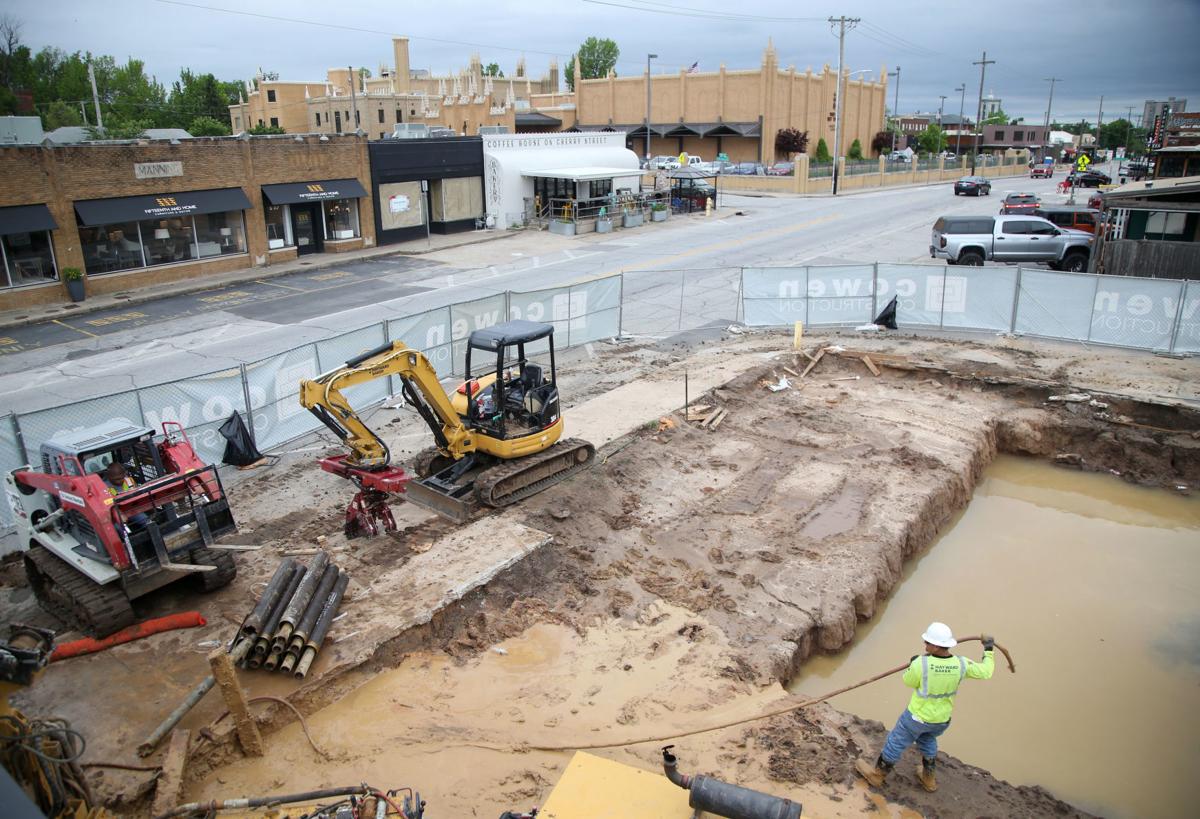 Duane Phillips stood in the middle of a construction site near 15th Street, surrounded by pallets and hard hats and heavy machinery.

“I have a master’s in structural engineering but out here is where I love to be,” the developer says. “I love the dirt.”

He has been getting his hands dirty a lot lately.

Owner of Oak Properties LLC, he is in the midst of building a $9 million project called 1515 Cherry Street and The Lofts at 1515, a 28,000-square-foot development that will include retail, restaurants and apartments.

It represents his fourth development on 15th Street, increasing his investment in the area to around $40 million. It also is indicative of the growth on that signature stretch between South Peoria and South Utica avenues.

“I just love Cherry Street,” he says. “Most of the tenants are grounded. You can always get the rents that you need.

“Getting rents is one thing. But the retailers are able to support that rent. It works down here. They make money. We make money.”

Phillips has been working his way west on the thoroughfare, previously developing the 1551 Building (Roosevelt’s, Taziki’s Mediterranean, Orange Theory Fitness and InterWorks) and Cherry Street Ridge (Salata, Chipotle, Pinot’s Palette). He also was behind the conversion of the former Luby’s Cafeteria into Tulsa Fertility Center at 15th Street and Boston Avenue.

“They used to have great restaurants and bars, but it was a two-hour trip,” Phillips says of Cherry Street. “With the retail now, it’s something that can keep you here all day long. You can shop and eat and grab a beer if it’s in the evening. That’s what Cherry Street’s been missing.”

Bruce G. Weber, the jeweler that relocated from Utica Square to Phillips’ development, held its grand opening last weekend. The five-story Lofts at 1515, scheduled for completion around February, will comprise 15 apartments with balconies and designated parking.

Also part of the project are a basement speakeasy, rooftop bar, Store 5a, a high-end, preowned jewelry concept by the owners of Weber, and CycleBar, an indoor cycling studio.

“There is momentum and it’s happening on Cherry Street,” Phillips said. “There’s still some pockets here. If we can get a few more retailers out of the Utica area or Brookside, that will help.”

Brett Rehorn’s attachment to Cherry Street began about 1994, when he was a mechanical contractor for the Cherry Street Brewery in Lincoln Plaza (15th Street and Peoria Avenue). He was an original partner in the now-closed Bourbon Street Cafe, which opened in 1996, and he followed that up by opening Kilkenny’s Irish Pub in 2002 and Nola’s Creole & Cocktails last year.

“Now, if you were to count between Peoria and Utica on 15th Street, there are like 30 restaurants and bars and coffee shops,” he says. “In 1996, when I opened, there were maybe 10.”

When Rehorn started Nola’s, 11 people in the kitchen had worked for him at Bourbon Street.

“To me, it was a little niche that nobody was doing,” Rehorn says. “And I was familiar with the food at Bourbon Street. This location has always been a good location but it’s always been a hole-in-the-wall bar.

“The combination of Cherry Street booming and nobody else doing full-service Cajun and my having done it before, to me it was kind of a no-brainer.”

‘Take somebody from out of town’

The store had been at the previous location since 2001 but had enjoyed a presence in upscale outdoor shopping center for decades.

“That’s what we’re starting to see with this new development wave is a shift from the traditional retail,” Ganzkow says. “What we’re seeing is a shift in development where you see higher density projects like Duane’s, where you are introducing residential over commercial, retail. On his (1551 Building) project, that’s office over ground-floor commercial retail. Parking is a factor in all this, too.”

Adding convenience for patrons and mitigating congestion in neighborhoods, Phillips, by the time his current Cherry Street project is finished, will have added 240 free parking spaces to the strip.

The potential for growth in the district remains strong. Cherry Street is one of 19 census tracts in Tulsa designated as an Opportunity Zone, a federal incentive in which developers can reduce tax payments on gains while investing in projects.

“Cherry Street does offer that balance of restaurants, shopping,” Ganzkow says. “It’s a very unique neighborhood. It’s where you would take somebody from out of town.

“It begs that question, ‘where do the locals go?’ Cherry Street offers all of those things.”

Learn more about snakes in Oklahoma from Aaron Goodwin, a 20-year zookeeper at the Tulsa Zoo.

Gallery: See which snakes in Oklahoma are venomous and non-venomous

Read the story: When it comes to snake sightings, be wary of social media but cautious during spring mating season

The projects are expected to be finished in the fall of 2022.

'Beginning of a new wave': MidAmerica Industrial Park wants to capitalize on Canoo investment in Pryor

The investment by Canoo, a Los Angeles-based startup company, is among the largest ever made in the area, rivaling the $550 million American Airlines committed to its maintenance base in Tulsa in early 2020.

American Airlines canceled hundreds of flights through at least mid-July as it strives to maintain service in the midst of massively increasing travel demand while the coronavirus pandemic continues to recede in the U.S.

It is expected to cost the globe's auto sector $110 billion in revenue in 2021, according to New York-based consulting firm AlixPartners.

One Oklahoma county is tops in the vacation home market. It may not be where you expect

Vacation home sales soared the second half of last year — and so far this year — and Oklahoma has one of the top markets: Delaware County, where Grand Lake has long been a place to play and to live, at least part time.

Having a great credit score can have a major impact on your quality of life, but building a strong credit score can take years. Experian, one of the three credit reporting bureaus, wants to make it easier. Experian Boost is a free service that allows consumers to add additional data to their credit histories with […]

City of Tulsa building permits are unavailable due to the recent ransomware attack on city computers.

Prices for building materials have risen to levels never seen before, and contractors are backed up.