In this screen grab from a video at Soul City of Tulsa, actor Gary Busey (second from right) plays drums at the gastropub and music venue. Courtesy Kevin Smith 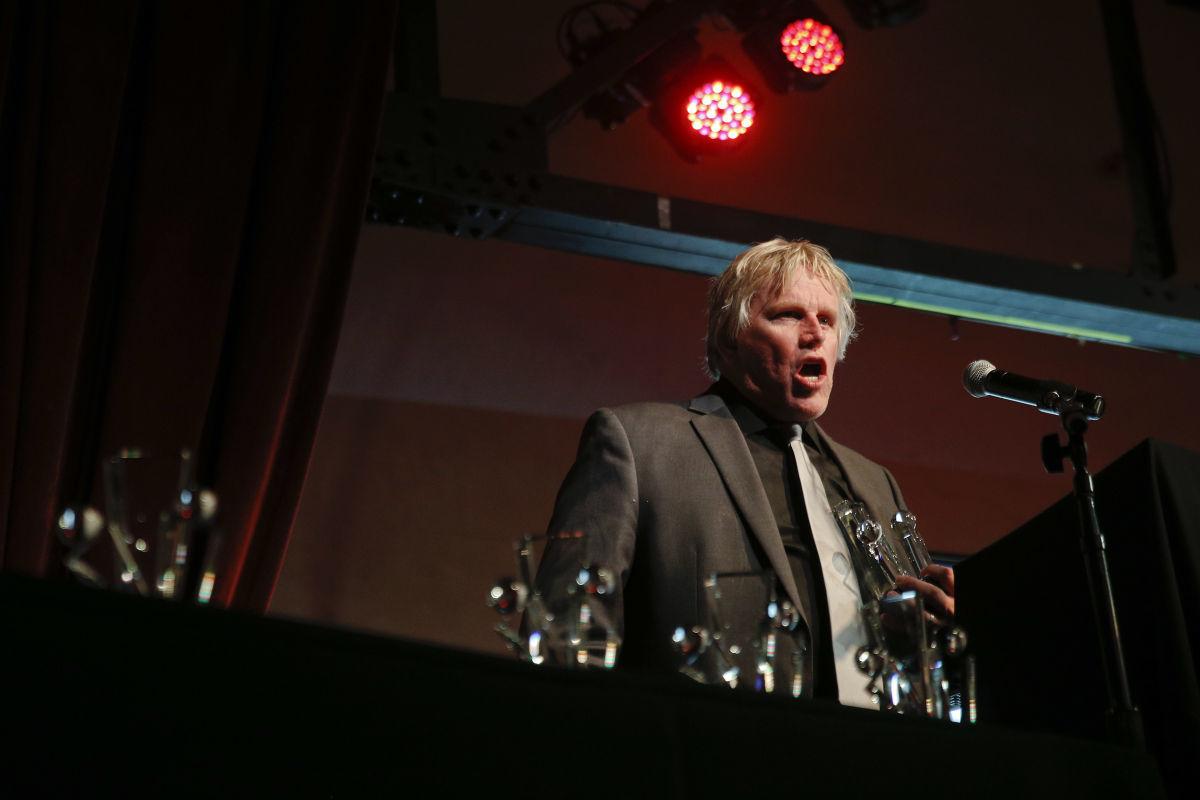 Actor Gary Busey returned to visit his hometown of Tulsa this week. The homecoming included a jam session Wednesday night at Soul City of Tulsa.

Playing the drums, Busey sat in with Don White, Steve White and Casey Van Beek as they performed at the gastropub and music venue.

“He is beloved in Tulsa,” Amy Smith said when asked about Busey’s visit to the business she owns and operates with her husband, Kevin.

“He graduated from Nathan Hale and played football there and a lot of his friends were here last night. It was just a cool, groovy Tulsa iconic Route 66 evening. It was great. We are so blessed to be on Route 66. We love it and magical stuff like that happens all the time here. We were honored to have him.”

Busey was in town to participate in a documentary project about historic Church Studio. Busey was a friend of Leon Russell, whose mythology is intertwined with Church Studio.

Amy Smith got a call Wednesday from Church Studio owner Teresa Knox, who indicated that Busey wanted to hear some live music. Knox wanted to know if it was OK to bring Busey to Soul City. When Busey showed up, he was of course recognized and many people in Soul City popped out their mobile phones to record when he sat down and started playing drums.

“He is such a character,” Amy Smith said. “He is bigger than life. You know that even before you meet him in person. He was wonderful and everybody that was here got blessed. It just made for a really funky, fun enjoyable evening.”

The performers who were playing don’t usually have a drummer, according to Amy Smith, but Jake Lynn happened to be playing the drums with them. “They were on break and Steve White came out the back patio and he said, ‘Hey, Gary Busey wants to play your drums.’ He was like, dude, OK.”

Amy White said she thinks Busey sat in for a couple of songs. She said he had that classic smile on his face.

“He had a great time. He always talks about Tulsa fondly. He has a brother, David, that comes in all the time and a sister-in-law, Jan Busey, that live in town.

David is an amazing musician. He plays the piano and toured with Steve Pryor for years in their band and several others. He is one of my favorite people on the planet. He comes in often and sometimes will sit in and play the piano. He’s mind-blowingly talented.”

She said video of Gary Busey playing drums at Soul City was posted on social media and generated a lot of response on Facebook and Instagram.

Front-row seat: Pawhuska braces for filming of 'Killers of the Flower Moon'

David Grann's book "Killers of the Flower Moon" attracted visitors to Pawhuska. The stream of visitors is expected to continue with the making of a Martin Scorsese film. Meanwhile, at least one Pawhuska resident can watch the action from his front porch.

Williams was accompanied by his wife, Tina Mahina Williams, who is from Tulsa and played a biker girl in the shot-in-Tulsa film "Rumble Fish."

This family-run Mexican restaurant delivers good food — but chili fans will need to ask for them to bring the heat.

William Belleau and Louis Cancelmi are also joining the cast of the film, which will be shot in Oklahoma.

The Gap Band's Charlie Wilson talks about race massacre, 'You Dropped a Bomb on Me' in ABC podcast

Rumors have persisted for years: Is the song related to the race massacre?

"While Dad's health has deteriorated quickly, we can assure you that his great sense of humor continues to shine through," his family said in a statement. "And yes, he still wears his khakis at home."

Vaccinated and ready to go, the CMA entertainer of the year is launching a 55-city tour in the fall.

The art of hope: Exhibit brings artists together to examine past, future of Greenwood

A group of Tulsa artists collaborated on this exhibit, the second in a series sponsored by the Greenwood Art Project.

Fire in Little Africa is set for May 28 release via Motown Records/Black Forum in partnership with the Bob Dylan Center and the Woody Guthrie Center. The album aims to bring fresh and important perspective to the 1921 Tulsa Race Massacre while celebrating Tulsa's vibrant hip hop scene.

The offer is good at participating McDonald's in northeast Oklahoma from 6 to 9 a.m.

In this screen grab from a video at Soul City of Tulsa, actor Gary Busey (second from right) plays drums at the gastropub and music venue. Courtesy Kevin Smith