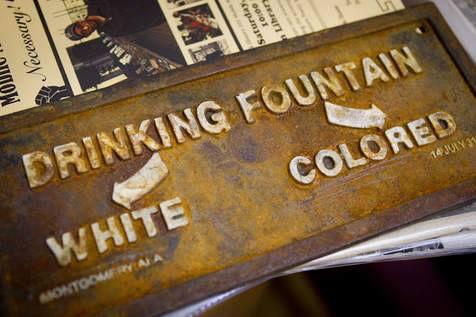 This sign is one of more than 7,000 objects contained in the Black History 101 Mobile Museum. A selection of items go on display Sunday at the Greenwood Cultural Center. Courtesy 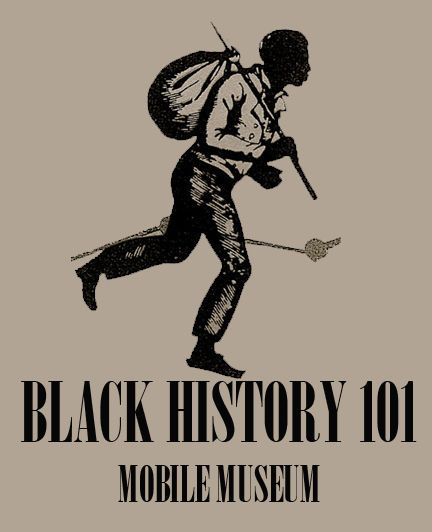 An infobox with this story originally contained an incorrect time for the exhibit's opening reception and has been corrected.

A good portion of the items that make up the Black History 101 Mobile Museum are things that, despite their age, can still shock.

Khalid el-Hakim, who began collecting the items that would make up his museum in the early 1990s, understands that. But his reasons for creating this collection have nothing to do with shocking viewers.

“To me, these things are inspiring,” el-Hakim said in a recent telephone interview. “I understand that seeing some of these images and the racism that they contain, can be hard for some people to take.

“But you pair those images with ones that show how African-American people have responded to that racism,” he said. “You see the greatness it has inspired in so many people, to confront and resist it.”

El-Hakim will be bringing a portion of his collection, which has been called “the most complete collection of African-American artifacts in the world,” to Tulsa next week.

The exhibit will be on display Sunday through July 16 at the Greenwood Cultural Center, 322 N. Greenwood Ave.

El-Hakim will be in attendance at Sunday’s opening event, along with Professor Griff, one of the founding members of the seminal rap group Public Enemy.

“Griff has been one of the real champions of the museum,” el-Hakim said. “He’s been the guest speaker at about 90 percent of the places the museum has been. We’re also working on a documentary about the museum, and we’ll probably be doing some filming while we’re in Tulsa.”

The Black History 101 Mobile Museum began when el-Hakim was a student at Ferris State University.

“I had a sociology professor, David Pilgrim, who would use artifacts to teach about racism in America, especially during the Jim Crow era,” el-Hakim said. “I started to collect Jim Crow-era memorabilia at first.

“The thing of it is, it wasn’t that hard to find,” he said. “I was finding things at antique shops, estate sales, garage sales.”

El-Hakim began using the materials he collected to help the students he taught in Detroit public schools understand African-American history. As the collection grew, el-Hakim created the Mobile Museum — a 30-foot-long trailer to house and exhibit the collection.

El-Hakim also expanded his searches beyond the Jim Crow era, so that the museum’s collection ranges from a 19th century bill of sale from a slave auction to a copy of the photograph of a lynching that inspired the song “Strange Fruit,” to memorabilia from hip-hop artists.

“The trailer doesn’t go outside the state of Michigan — it’s just not cost-effective for the presenters,” el-Hakim said.

The exhibit that will be shown in Tulsa is what el-Hakim calls the “Signature Exhibit,” which centers around documents and artifacts signed by well-known individuals — from Frederick Douglass and Booker T. Washington to Martin Luther King Jr. and Rosa Parks, Marcus Garvey and Malcolm X to Muhammad Ali.

“What I want to show with this exhibit is a fuller picture of the African-American experience,” el-Hakim said. “I want people to see how people achieved success in the face of some of the worst treatment Americans have ever faced.

“You learn about the brutality of the Jim Crow era, and then you see someone like Booker T. Washington standing up to that racism to lead the Tuskegee Institute,” he said.

“You see Marcus Garvey respond by forming the Universal Negro Improvement Association. We only get the smallest sliver of this history. Everyone knows about King’s ‘I have a dream’ speech, but they don’t know about his opposition to the war in Vietnam.”

El-Hakim said these men and others like them had an impact on and inspired people around the world.

“These are the things that give me more courage,” he said. “Sometimes you feel your back is against the wall, and you wonder what can you do when racism is so bad in this country. But there is a legacy of resistance that isn’t taught in schools, that the current and future generations need to know.”

Here's your A-to-Z guide for PBR in Tulsa

The world's top professional bull riders are coming to BOK Center. Read about the bulls, the riders and even the dirt before watching riders attempt eight-second rides.

This sign is one of more than 7,000 objects contained in the Black History 101 Mobile Museum. A selection of items go on display Sunday at the Greenwood Cultural Center. Courtesy