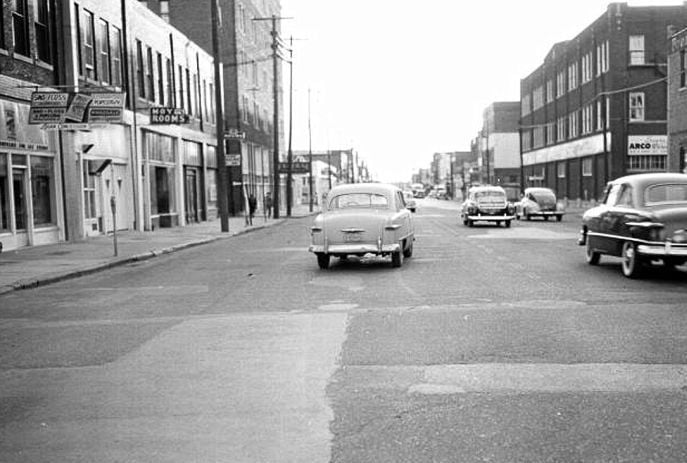 The intersection of First Street and Elgin Avenue is shown in 1953. May Rooms, a brothel operated by Pauline Lambert, is located on the left. Among the published addresses for the May Rooms were 322½, 326½, 328½ and 330½ E. First St. BERYL FORD COLLECTION/Rotary Club of Tulsa 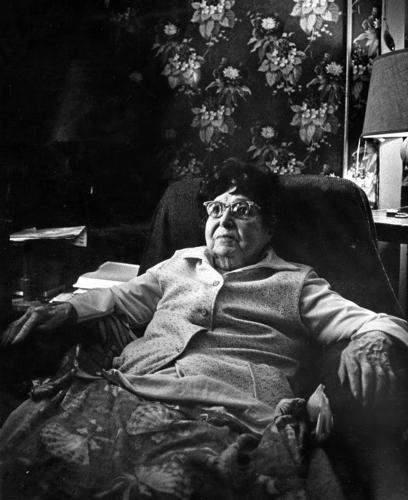 Pauline Lambert, operator of the May Rooms, is shown in 1978. During the interview, she wore a curly, brown wig and sat erect in a rocking chair. She had a twinkle in her eye and a teasing grin, according to Tulsa Tribune reporter Mary Hargrove. CURTIS WINCHESTER/Tulsa Tribune file 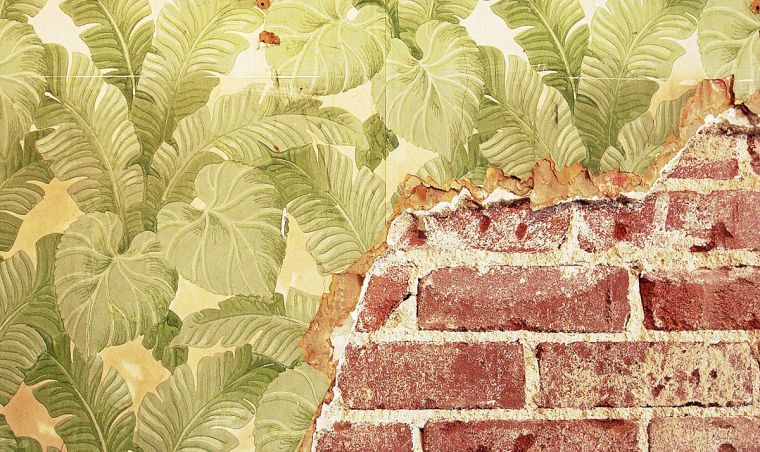 Old wallpaper peels from brick walls inside an artist's studio, the former location of the May Rooms, a longtime Tulsa brothel in the 300 block of East First Street. Tulsa World file

From 1936 until 1979, Pauline Lambert operated the May Rooms, Tulsa’s most enduring house of ill repute.

Lambert's domain occupied a catacomb of second-story rooms in the seedy buildings of East First Street between Detroit and Elgin avenues in downtown Tulsa.

Today, the space is adjacent to El Guapo’s Mexican restaurant and has recently been used as an artist’s studio.

“She probably has saved more marriages than any minister in Tulsa,” said Frances Leach, a wealthy widow and former Tulsan who arranged to pay for legal representation when Lambert was facing jail in 1978.

Four judges who knew her well said of Lambert and her establishment:

• “A living legend … In the 1930s and ’40s, coaches and alumni of winning high school football teams used to arrange for the team to go to the May Rooms, ” District Judge Clifford Hopper.

• “I’d say some of the founding fathers of our city grew up under her tutelage,” District Judge Richard Armstrong.

• “It’s a sad commentary on the image of Tulsa that the city’s oldest proprietorship should be a bawdy house,” District Judge Raymond Graham.

• “This business has been going on since before the birth of Christ and this court can’t stop it today,” U.S. District Judge Allen Barrow.

In an interview published June 15, 1978, Lambert told Tulsa Tribune reporter Mary Hargrove that she was a former Sunday school teacher.

“I could still teach it in any church in Tulsa right now,” she said.

Twice married, she came to Tulsa via Muskogee from her native Tennessee when a railroad man told her she could make money running a boarding house. She supported a sister and her four children during the Depression years, she said.

‘Never a report of VD’

She told Hargrove how she once blew the whistle on Tom Lester Pugh after he passed counterfeit bills at her establishment. Pugh was a reputed member of the Dixie Mafia and later went to prison for the 1971 murder of a grand jury witness.

During the interview with Hargrove, Lambert seemed wistful about her glory days when she had six to eight full-time “girls,” not two or three “old tomatoes” working irregular hours. But she wasn’t bitter about the frequent fines and arrests.

“Sheriff George Blaine used to come up and arrest us all the time and haul us down to the station. I’ve had girls here, I don’t deny it, but there has never been a report of venereal disease to come out of the May Rooms, and I’m proud of that,” she told the Tribune reporter. “My girls go to the doctor all the time.”

In 1997, Tulsa World reporter Terrell Lester interviewed a former taxi driver who remembered Lambert as a generous tipper who “could have passed for somebody’s grandmother.”

Up until World War II, prostitution was regulated by the city, according to an April 6, 1941, story in the World.

“The government’s former attitude was that a segregated district properly inspected was to be preferred around army camps and cantonments,” Mayor C.H. Veale said.

Under Police Commissioner Russell Cobb, the police department had recognized prostitution in a defined area and required the women to take periodic medical tests under the threat of arrest for vagrancy.

Declaring a “war on prostitutes” in 1941, the mayor said operators of the city’s two dozen bawdy houses were being put on notice that padlock proceedings would commence April 15 and prostitutes had 10 days to leave town.

The crackdown was initiated by “government health officials,” Veale said and seemed to be related to the opening of the bomber assembly plant at Douglas Aircraft in Tulsa.

Some police officers said they didn’t think the new approach would work. It didn’t.

Through the years, the Tulsa police regularly raided the May Rooms, but Lambert and her associates bonded out of jail quickly and were soon back in business.

The usual charge was vagrancy, but Lambert was twice hauled in by the vice squad for playing a jukebox in a house of prostitution. In 1952, she was fined $3,000 for income tax evasion.

In 1978, Lambert was convicted of a felony – her first – for pandering and sentenced to three years in prison. In handing down the verdict, Judge Graham observed that the May Rooms “may be a palace of pleasure to some, but it’s heartbreak hotel to many.”

Lambert would never see the inside of a prison cell.

Her attorneys continued to appeal the sentence until 1983, when they learned that she had been dead for four years.

Her death went unnoticed because it appeared under her real name, Clara Palmer, in the Nov. 2, 1979, World. She had checked into a nursing home eight months earlier and died at St. John Medical Center. She was 89.

A bail bondsman had discovered Lambert’s death when ordered to produce her by Judge Clifford Hopper, who took over her case after Judge Graham retired.

After learning of her death, Graham said he had assured the appeals court that Lambert wouldn’t be “running a bordello anymore” and he had intended to suspend the sentence.

“I don’t know whether she’s dead or she hired somebody to take her place.”

Teapot Dome plot may have been hatched at Tulsa's Sinclair Building

Gunshots, flying inkwells and a spittoon

Rat-killing skunks and other news in 1915

'Man in the hole' had everything he needed

1926 was the year we killed Santa's reindeer

A page from the July 24, 1952, Tulsa Tribune shows photos of the Pearl Hotel and the May Rooms with a story about one of many attempts to shut…

The intersection of First Street and Elgin Avenue is shown in 1953. May Rooms, a brothel operated by Pauline Lambert, is located on the left. Among the published addresses for the May Rooms were 322½, 326½, 328½ and 330½ E. First St. BERYL FORD COLLECTION/Rotary Club of Tulsa

Pauline Lambert, operator of the May Rooms, is shown in 1978. During the interview, she wore a curly, brown wig and sat erect in a rocking chair. She had a twinkle in her eye and a teasing grin, according to Tulsa Tribune reporter Mary Hargrove. CURTIS WINCHESTER/Tulsa Tribune file

Old wallpaper peels from brick walls inside an artist's studio, the former location of the May Rooms, a longtime Tulsa brothel in the 300 block of East First Street. Tulsa World file