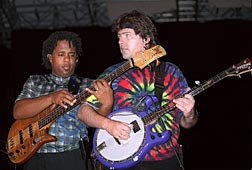 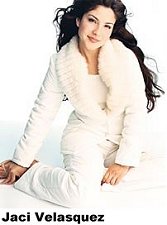 The Flecktones are booked for the annual Oklahoma Blues Festival, which is set for the first weekend in May.

The annual Oklahoma Blues Festival, the first weekend in May, is already well into its planning stages for its 2002 shows in and around the Brady Theater. This is a Tulsa event that gets better every year, and last week I got a peek at the artists already booked for the upcoming festival -- a roster of top-notch players that stretches the boundaries far beyond basic blues.

Lots of other colorful folks and events are being planned, too. It's very exciting. -- T.C.

The Tiptones head back to Encounters

The Tiptones -- the popular three-man, one-keyboard pop- rock-R&B band -- began exactly a decade ago, in December of 1991. There's only been one personnel change since then, with Frank Westbrook taking the place of the late keyboardist David Tanner in 1995.

Four years ago, The Tiptones moved into a steady, four-night-a- week gig at Encounters in the Doubletree Hotel at Warren Place. After two years, they transferred into a similar situation at Elephant Run in the Trade Winds Central Inn.

Now, after two years there, the trio's headed back to Encounters, where they'll play Thursdays through Saturdays. And each Wednesday, they'll be at Camerelli's, the same venue and day they played back in the early '90s.

"Our shows at Camerelli's will be just acoustic piano and vocals," said Tiptone Jim Sweney, "which is the way we started. It's going to be a nice treat to kind of change things up again."

Their Encounters shows, however, will continue to feature Westbrook's danceable keyboard programming behind the vocals.

"After two years, it was time for a little change," says Chris Campbell, the third member of the group. "We had an opportunity to go back to the Doubletree, and we always had fun there.

"When I was in The Mystery Band, I used to think, `Well, if you have a house gig and stay in the same place for a long time, people get bored and stop coming,'" he added. "But that's not the case. I think people like having a place to go and a band that's theirs, a band they can be friends with. We've made hundreds of friends, people who call us by name, over the last five years -- by doing 220 dates a year."

The Tiptones are scheduled to begin at the Doubletree on Jan. 3, and at Camerelli's the day before that. They'll also be doing the Doubletree's New Year's Eve show in the hotel ballroom. -- J.W.

"Thomas Conner named Nathan's album one of the best of the year," says Blake 7 guitarist- vocalist Dave Barber, helping ensure a place in this column by quoting one of its writers. "It's getting substantial play on local radio, too."

Barber stresses that all ages will be admitted to the two-act concert.

"As far as I know, this is really about the only show in town for anyone under 21," he says.

Just a couple of weeks ago in this column I passed on the announcement of two new signings to Tulsa-based Yawn Records (Tex Montana's Fireball Four and Nude Furniture). Things must be going well at the local indie label, because head honcho Joe Cinocca just signed another act: the Ed Kemper Trio (aka EK3) out of Montgomery, Ala. Cinocca says they "grind fractal, smart, math rock to a pulp" and have been touring extensively, opening for acts such as Man or Astroman? and the Flying Luttenbachers. They're due to swing through the state this spring.

Don White indulges his country side

Years ago, Texas roadhouse rocker Delbert McClinton and Tulsa-based singer-songwriter Don White were sharing a bill somewhere, and McClinton made -- as White remembers it -- this observation: "You're kind of a country guy with a blues flavor, and I'm kind of a blues guy with a country flavor."

For the past two years, in addition to his continued live gigs, White's been indulging the country side of his personality on Vinita radio station KITO (96.1 FM/1470 AM). There, he and KITO's Dave Boyd host a 1 p.m. Wednesday program called "Not Necessarily Nashville," featuring acts that don't get much exposure on corporate country radio.

Now, White's got a second show going. Called "The Don White Show -- Music with a Groove," it's heard over Rogers State University's KRSC (91.3 FM), aka The Wave, every Sunday at 10 p.m.

The shows are similar, White says, in that he plays a lot of discs done by his music-business friends, and occasionally plays a live number himself.

"This just gives me a little more experience doing it on my own," he explains. "And it widens my playlist a little bit, puts a few more people on the air that ought to be on the air."

If the KITO show emphasizes White's country leanings, then the KRSC show probably leans a little more toward his blues side.

"I'll play (blues-rock act) Storyville and some people like that -- Dire Straits, Jimmie Vaughan, people I can't play on the KITO format," he says. "I get to play some of the older country that I love on KITO, though, which I don't play on the other show. I love doing both shows; I'm having a good time with both of 'em." -- J.W.

Christmas has come and gone, but where were all the Christmas concert tours? Canceled, along with all the others.

Several Christmas-related and religious concert tours were scheduled to visit Tulsa this season, but they wound up canceled. Rest assured, it wasn't just the Tulsa dates that were can celed; in most cases it was the entire tour. Jaci Velasquez, for instance, dropped her December "Christmas" tour just a week before her scheduled Tulsa stop, and the Child of the Promise Tour, a star-studded Christian pop holiday show, canceled its entire run early in November. (I had a great interview with one of the stars, Debby Boone, before the cancellation; in case you missed it, it was our section cover story Sunday.)

The reasons stated for the cancellations range from post-Sept. 11 effects to the weakened economy, the latter of which likely is the best explanation for your recent reluctance to buy tickets. Behind the scenes, though, most of the public relations folks I deal with are saying that the cancellations are unnecessary, that advance ticket sales are slow but are firing off closer to the day of the show.

"The promoters are just scared, and they're the ones risking the money," one PR flak told me recently, after marveling at his show's cancellation despite moderate but healthy advance sales.

The panic is a domino effect from high-profile cancellations from acts such as Janet Jackson, Destiny's Child, Dave Matthews Band and Weezer. Most canceled shows, though, have been rebooked in the spring. -- T.C.