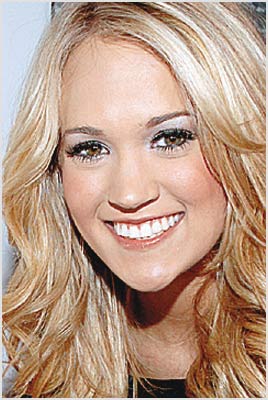 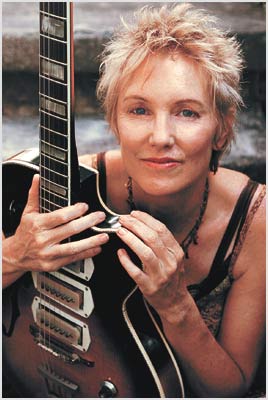 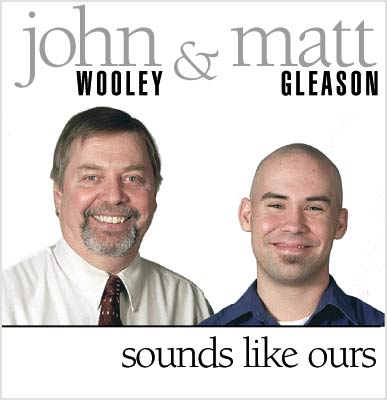 Checotah native Carrie Underwood's recording career may be just getting started, but it's already memorable. Last week, her debut album "Two Hearts" went triple platinum, signifying sales of three million copies. No other first album from a female country artist has ever reached that milestone as quickly.

The day after Underwood received official notification of that triple-platinum status, she earned a Gospel Music Association award for Country Recorded Song of the Year. That was, of course, for "Jesus, Take the Wheel," her first single from "Two Hearts." It's been on the Billboard Top Country Singles chart for nearly half a year.

She's not doing badly in the music-video department, either. In fact, Underwood was the only country artist to take home two trophies Monday night during the "CMT Music Awards" program, broadcast live from Nashville. Her video for "Jesus, Take the Wheel" won in two categories: Breakthrough Video of the Year (given to the best video from a debut album) and Female Video of the Year.

Obviously, "Jesus, Take the Wheel" is going to be a tough act to follow. But the progress of her new single, "Don't Forget to Remember Me," is encouraging, if not spectacular. It just slipped into the Billboard Country Singles Top 40 after seven weeks on the chart.

The 2006 RiverWalk Crossing Summer Concert Series kicks off this Friday with the Bop Cats.

The free outdoor concert starts at 7 p.m., at the RiverWalk Crossing amphitheater on the west bank of the Arkansas River in Jenks.

Other artists scheduled to perform in the coming months include Red Dirt Rangers on May 5, June 24 and August 18.

Singer-songwriter Marshall Chapman, whose songs have been recorded by Emmylou Harris, John Hiatt, Joe Cocker and others, will perform on June 9.

The series continues through early October. For more information, go online to www.riverwalkcrossing.coms.

When Eliza Gilkyson performs her compelling folk songs, the artist spends the first 15 minutes of her show "sending out feelers."

"I try to feel out how many new people I have there because if an audience is familiar with me, we can go to places a little faster than if they're new," she said. "... I don't take anything for granted with a new audience. Sometimes, especially because I do political material, I wait until I'm pretty deep into the set before I bring any of that out so people are comfortable with the turf."

Once she's deep into that set, Gilkyson might play her controversial new tune "Man of God," a less-than-subtle lyrical attack on President Bush, in which she sings "the cowboy came from out of the west with his snakeskin boots and his bulletproof vest / Gang of goons and his big war chest /... Startin' up wars in the name of God's son / Gonna blow us all the way to kingdom come."

"I don't do that until well into the set but, you know, if someone is going to come and hear me," she said, "I think they've already heard by then that I'm vocal about certain things."

However, don't get the wrong idea about her show.

"It's not like a Steve Earle show where I'm ranting," she said. "I'm not that way. I'm much more interested in the things that we share than the things that are dividing us right now. I try to tap into that a lot more.

"... I think that we are now at a point where humanitarian issues have become political issues," she continued. "I've come to the road of activism just out of my own personal concern about an interest in the human dilemma. That has crossed politics now for me in sort of a natural way. I think that's why it speaks to me. I don't think it's message driven, in a sense. It's more of a personal thing."

Towards the end of her performance, when the crowd claps and chants her name in hopes of an encore, Gilkyson said she's known to play the Disney hit song "The Bare Necessities," by her father, Terry.

But Gilkyson said she might just leave her Tulsa audience with something more poignant, Woody Guthrie's "Peace Call."

If these war storms fill your heart

With a thousand kinds of worry

Keep to my road of peace, you'll never have to fear.

Gilkyson plays the All Soul Acoustic Coffeehouse Thursday at All Souls Unitarian Church's Emerson Hall, 2952 S. Peoria Ave. Admission is $13 for seniors and students, or $15 for adults, 743-2363. Tickets are available at Borders-Midtown, 2740 E. 21st St. Tickets may be available at the door.

Tom Zonkger, who died last Thursday, was best known to Tulsa music fans as the late Gus Hardin's manager, helping resuscitate the singer's local career after she left RCA Records in the mid-'80s. He also functioned as executive producer for Don White's 1995 album "Bits & Pieces," and worked with both White and Hardin in the mid- '90s group Okie Soul.

"He was a great guy, real encouraging to everybody," White says. "He loved Tulsa music and the Tulsa music business, and he was someone you could always go to and he'd encourage you and do what he could to help."

"Tom was responsible for Gus' comeback," adds veteran Tulsa musician Rocky Frisco, a longtime friend. "That's when I first met him. His deal was to help the younger musicians, like T.J. McFarland, get started, and he helped a lot of the established people, too. As far as I know, he never charged anybody a dime for it."

Vocalist Maria Muldaur and her group are scheduled to bring their Sweet Lovin' Ol' Soul Tour to Tahlequah's Dream Theater on Saturday. It's their only scheduled Oklahoma stop.

Opening for Muldaur on the 9 p.m. show are Pat Moss and Harold Aldridge. Tickets are $13 in advance, $15 at the door, with advance tickets available in Tahlequah at N'Tune Music, Oasis Health Food Store and the Dream Theater box office; in Muskogee at John Michael's Music and Square Deal Music & Sound and in Stillwell at K. Dee's Music.

Muldaur, who first came to national attention in the '60s as a member of the Jim Kweskin Jug Band, is best known for her mid-'70s hits "Midnight at the Oasis" and "I'm a Woman." Her 2001 disc "Richland Woman Blues" was nominated for a Grammy in the Traditional Blues Album of the Year category.

Harp-guitarist Joesf Glaude -- his instrument is basically a guitar with a rather beautiful second neck -- is but one of the local fret masters who'll perform Friday at a Tulsa Guitar Society concert at Saffron Coffee Food Art, 1148 S. Harvard Ave.

The guitar hero will perform with fellow guitarists Pete Astor and Martin Perez, both of whom Glaude praised for their skills.

"The best thing about playing with both Pete and Martin is that they are both incredibly creative," Glaude said. "They leave a great backdrop to what I'm doing, but they are also good at leading me where they want me to go musically. We cue off each other very well."

The concert is one in a series aimed at bringing guitarists and music lovers together, Glaude said.

"Quite simply, it's a place for people who have an appreciation for guitar to come and hear guitar players, learn more about the guitar, and for guitar players to meet each other," the artist said in a telephone interview. "Our ultimate goal, though, is we'd like to become as big as some of the guitar societies in Kansas and Texas."

As it expands, Glaude said he'd like to see the society bring in guitar greats, such as Laurence Juber.

The Saffron show starts at 8 p.m. Admission is free.