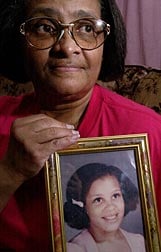 An angel statue stands silent watch over a photo of Lori Lee Farmer in her family's Tulsa home. Lori Lee and two other girls were killed at a Girl Scout camp near Locust Grove in 1977. The prime suspect, Gene Leroy Hart, was acquitted by a Mayes County jury. Subsequent genetic testing has linked Hart to the murders; but because of the deterioration of the evidence, investigators have been unable to determine conclusively that he is the killer.

Below: Betty Milner holds a picture of her daughter, Doris Denise Milner, at her Tulsa home. She said the grief of the past 25 years was often so great, that at times, she imagined that her daughter never existed. "It was beyond anything that you could imagine," she said. "To think you had a child that was taken away in such a cruel way, that sometimes, it was easier to believe that she never was."

LOCUST GROVE -- The three girls would have been all grown up by now, maybe married with children of their own.

Instead, their names -- Lori Lee Farmer, 8; Michele Guse, 9; and Doris Denise Milner, 10 -- are frozen in time, forever linked to one of the most notorious crimes in eastern Oklahoma history.

Twenty-five years ago, on June 13, 1977, their bodies were found. They had been murdered and raped at a Girl Scout camp near Locust Grove.

The prime suspect, Gene Leroy Hart, was acquitted by a Mayes County jury. Subsequent genetic testing has linked Hart to the murders; but because of the deterioration of the evidence, investigators have been unable to say precisely that he is the killer.

Hart died shortly after his acquittal, and there are no other suspects. The case is still open but considered inactive.

While the justice process is essentially ended, the crime still casts a shadow on those closest to it.

`And she never came back': Going to an overnight camp was Lori Farmer's idea, her mother said.

But Sherri Farmer picked the camp and took her daughter to the bus.

"And she never came back," Farmer said.

The morning Lori left for camp, her mother remembers looking at her and thinking how young the little girl looked.

Farmer recalled that she was worried most about the bus ride to the camp.

"We're watching the clock, then saying, `They're there. We can quit worrying' " she said.

Bettye Milner, Denise's mother, said the grief of the past 25 years was often so great, that at times, she imagined that her daughter never existed.

"It was beyond anything that you could imagine," she said. "To think you had a child that was taken away in such a cruel way, that sometimes, it was easier to believe that she never was."

It has been nearly 25 years since Milner has visited her daughter's grave. She cannot bring herself to go back.

"My memories of her are not dead," she said. "The fact that she's buried there -- my mind still goes there, even if I don't."

Michele Guse's family did not respond to several requests for an interview.

`It changed us': The three girls, who did not know each other prior to the camp, were from different parts of the Tulsa area.

How they ended up in the same tent is not known for sure, but the parents believe they chose one another, thus sealing their fate forever.

For the past 25 years, Lori's father, Dr. Charles "Bo" Farmer, has been director of the emergency room for St. John Medical Center.

Sherri Farmer was a stay-at- home mother. The family had recently moved to the Tulsa area from Arkansas.

"It changed us as a family," she said. "We're totally different. Every single person is different. We've all been shaped by this. And we've been this way for so long."

Kali Farmer, 26, president of her third-year medical school class at the OU Health Sciences Center in Oklahoma City, was only 1 when her sister died.

"I was definitely more clingy growing up. And I never went to camp. I knew it as a reality, not as fear," she said.

Panic and nightmares: The girls were found dead about 6 a.m. Investigators believed that the murderer chose the tent because it was the most remote and closest to the edge of the camp, which was surrounded by dense woods and brush.

The girls were hit in the head with a blunt object after the killer entered through the rear of the tent.

Lori, a petite child, probably died immediately. Both she and Michele were raped in the tent; their lifeless bodies were put into sleeping bags and carried more than 130 yards away, passing seven other tents.

Even after being hit in the head, Denise was probably still conscious and made to walk, since footprints matching her feet were found in the mud.

She was raped and strangled near where the sleeping bags were found.

After the murders, Bettye Milner tried to get psychological counseling for her daughter, Kathy, but her pediatrician said she didn't need it. She was told that 5-year-olds wouldn't remember anything.

But Kathy did need it, and finally received professional help after she graduated from college about seven years ago.

Still angry: Sherri Farmer, who organized the first Oklahoma chapter of Parents of Murdered Children, is still angry and bitter with the Girl Scouts.

She said officials there always treated her as an adversary rather than as a parent who had lost a child.

"It would have meant a great deal to us if they had treated us just like a mom and dad," she said. "They did absolutely nothing to be comforting to us.

Desperate to get any information about her daughter's last hours, Farmer recalls trying to find out what Lori had for dinner, but the organization would not tell her.

"We definitely protect the image of a good organization," Morgan said. "The reason we're concerned is because we know that we have the best program for girls available in the world today."

The three girls are the only campers ever to be murdered at any Girl Scout camp in the country since the organization was founded in 1912.

"It was a horrible aberration," Morgan said. "But people get killed all the time at national parks. Look at Chandra Levy."

Because of the tragedy, Oklahoma's camp may now be the safest in the country.

Camp Scott, where the girls were murdered, was closed and eventually sold.

Today, about 1,000 Girl Scouts attend the residential or overnight camp each summer on 60 acres at an undisclosed fenced-in location near Sand Springs. Sitting in the middle of 36,000 acres, officials said it is totally inaccessible to outsiders.

The council spent $33,000 for security fences topped with barbed wire that enclose the camp.

Only parents of campers are given the precise location. All signs and markers, which were once used to welcome campers and their families, are gone.

Tents are no longer used. Instead, the girls sleep in cabins or dormitories, which can be locked at night.

Since 1979, professional security guards patrol the premises at night.

The Farmer and Milner families filed a $5 million civil lawsuit against the organization, but a jury found in favor of the Magic Empire Council.

`No question': S.M. "Buddy" Fallis Jr., the Tulsa County district attorney in 1979 who led the Hart prosecution, said it was the most difficult case he has ever tried.

"I still feel it's not a matter of whether I won or lost, it's a matter of did I, did society avenge this act against the little girls. I felt like there were failures, a lot of failures, of society to react."

Fallis said he is reminded of the murders nearly every day.

Now semi-retired, he lives in eastern Oklahoma and passes the former camp as he commutes into Tulsa to work.

When Fallis tried the case, he was 45 and well-established in his career, having been a prosecutor for nearly 20 years.

He had lots of experience with, as he put it, "the seamier side of life." But nothing prepared him for the devastating sense of defeat when Hart was acquitted.

"It reinforced and probably made me more cynical than I'd ever been," he said. "I had seen a lot of man's inhumanity to man. It doesn't make you a better person. I had a lot of baggage already, but this case really accelerated it."

Fallis, who before the trial couldn't imagine himself doing anything other than criminal law, joined a private firm two years later to practice civil law.

He refuses to criticize the jury for its decision. He speculates however, that jurors may have felt intimidated by the hostile atmosphere and support shown to Hart, a local football hero well-known in the area.

But Hart was also a convicted rapist, burglar and kidnapper. He was a prison escapee at the time of the crime.

And when the defense accidentally let it slip that Hart was headed to prison anyway to serve a 300-year sentence, Fallis surmises that the jury took the easy way out.

"No fuss, no muss," said Fallis, who has never wavered in his belief that Hart killed the girls.

"I have no qualms that he is the perpetrator. I have no question in my mind."

`Deepest sympathies': Even though Hart was acquitted, his attorney for the trial, Garvin Isaacs, has been defending his former client ever since.

"My deepest sympathies go to the parents of the Girl Scouts. They always have. I send my sympathies to them, and so did Gene Leroy Hart. It's not something he could ever say," said Isaacs.

After all these years, does he still really believe Hart is innocent?

"He did not kill the Girl Scouts," said Isaacs, who noted that his client was with an uncle in Tulsa that night. Hart's sister would not respond to requests for an interview.

More than anything, Isaacs said the case signifies the importance of a fair and impartial jury trial and the right of an attorney to cross-examine witnesses and to challenge the chain of custody for evidence.

Even though he was exonerated, Hart was returned to the Oklahoma State Penitentiary in McAlester to serve his remaining prison term.

Two months later, he collapsed and died of a heart attack while exercising in the prison yard. Isaacs, who had met with him several days before he died, said his mood was positive.

"He wanted to get on with his life. He was optimistic and hopeful that everyone would know he didn't kill the girls. He wanted the world to know he was innocent of the murders," Isaacs said.

`Always open': The Farmers, married for 37 years, are still searching for answers.

"I feel fairly conclusively that Hart was involved. The only question in my mind is whether he was the only person involved," said Dr. Farmer.

The Farmers said they are satisfied with FBI genetic tests conducted in 1989, which connected Hart to the murders.

DNA tests conducted within the past six months were incon clusive because crime samples were so deteriorated.

Officials said they will attempt to retrieve sperm evidence from other articles in storage for further testing.

"I believe there are people out there who know what happened," Sherri Farmer said. "We're always open to anyone who would, or could, tell us anything they know."