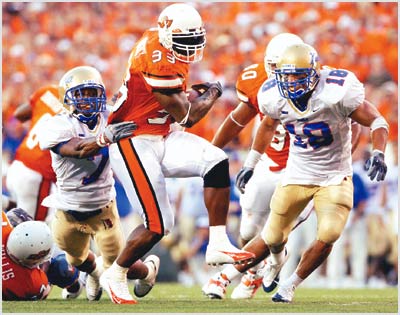 An Oklahoma State University running back takes on the University of Tulsa defense at Boone Pickens Stadium in Stillwater on Sept. 11, 2004. 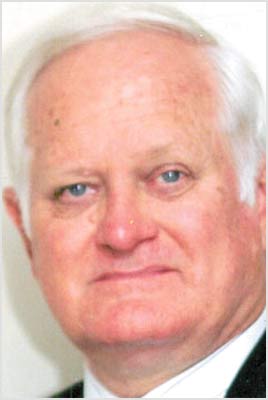 R. Henry Migliore If a group of students in a senior level course could figure this out as a class project, where was everyone else? Sorry, friends, all of us in Tulsa were stupid.

I am introducing this phrase for inclusion in the American Heritage Dictionary. Wish I could take credit for it. "That's stupid," bellowed Bishop Michael Reid time and time again as host and speaker at a two-day church/nonprofit and business conference in London. I was a speaker and seminar presenter at the same conference hosted by Bishop Reid of Peniel Churches International.

As the bishop presented material and examples, he would repeatedly bellow out "that's stupid." I began to see this phrase as part of an intellectual exchange. Another phrase he liked to use was, "the Shepherd gets up every day trying to take care of sheep that by their very nature have 10 ways to kill themselves daily."

My observations at this stage of life of what I see is really, really stupid here in Oklahoma. Listed, but not necessarily in this order of priority, are the following: the Oklahoma Lottery, the Great Plains Airlines episode, years of stalling on the Convention Center, and the Oklahoma State University/Tulsa University football series.

Mark your calendar for the year 2010 and compare the present Oklahoma education budget to the budget this year. Yes, the funds allocated from the lottery will go exclusively to education. Guess what? The actual budgeted expenditures will be a fraction of the lottery contributions. Beneficial to education? Hardly! We can already see the social cost.

Here we are in Oklahoma with the distinction of having the most casinos outside of Nevada. I was a visiting professor in Guadalajara, Mexico. Instituto Tecnol[ 193]gico y de Estudios Superiores de Monterrey, where I taught, had a raffle on a fleet of cars and made millions. My guess is that 95 percent went straight into the university coffers. Oklahomans, we have been sold down the river with the lottery. That's stupid!

The Great Plains Airline fiasco should never have gotten off the ground. Great Plains was doomed to a crash landing before it ever got off the runway. If the city of Tulsa wants to subsidize a business, I'd invite them to expand my consulting company, Managing for Success. My company made more money than Great Plains over the same time period. What were they thinking? That's stupid!

Why did it take so long to get Vision 2025 going and the Convention Center started? My Northeastern State University and Langston students in 1989 worked on a project for the Tulsa Sports Commission and the Fast Breaker Basketball team. Among other things they concluded the need for the new center. They did the analysis with help from volunteer professionals in the community and determined among other things the need for the new center. They looked at various locations and suggested almost exactly where it is located today.

Their story was reported locally on television and in these Tulsa World articles, "UCT Students Research Fast-Breakers Market" (May 13, 1989) and "Sports Complex needed, UCT Report Says" (May 13, 1989). If a group of students in a senior level course could figure this out as a class project, where was everyone else? Sorry, friends, all of us in Tulsa were stupid.

Second-year football Coach Mike Gundy's comment, "I thought the OSU/Tulsa games were good for the state," opens the door to get things moving again for an OSU series with TU (Tulsa World, Feb. 9, 2005).

Why is the Oklahoma State football team opening the season in 2006 against Missouri State? Oklahoma State should open Labor Day against the University of Tulsa. Talk about fan interest and a certain full house! Why not open the season every year Labor Day weekend against Tulsa University? Dave Sittler, in his well-written Tulsa World article "OSU's decision: Is it champion or is it chicken?" (Sept. 8, 2004) asked the following good questions:

"When OSU completes the marvelous renovation it has planned for Pickens Stadium, the Cowboys are going to want to showcase a sold-out facility to potential recruits who are on recruiting visits or watching on TV. You think the Cowboys will sell out $73 tickets to an OSU-Arkansas State game, which is on future schedules, as easily as it attracts buyers for the TU game? . . . Of course, OSU could champion the fans' cause and give them what they want.

So that old hardball is back in your court, Cowboys. What's it going to be? Champion or chicken?"

This OSU/TU football series just makes sense. Like it or not, these programs are in the entertainment business. Fans have many entertainment options. Both stadiums will be full for decades. Two games in Stillwater for one in Tulsa: that's stupid.

An Oklahoma State University running back takes on the University of Tulsa defense at Boone Pickens Stadium in Stillwater on Sept. 11, 2004.

R. Henry Migliore If a group of students in a senior level course could figure this out as a class project, where was everyone else? Sorry, friends, all of us in Tulsa were stupid.