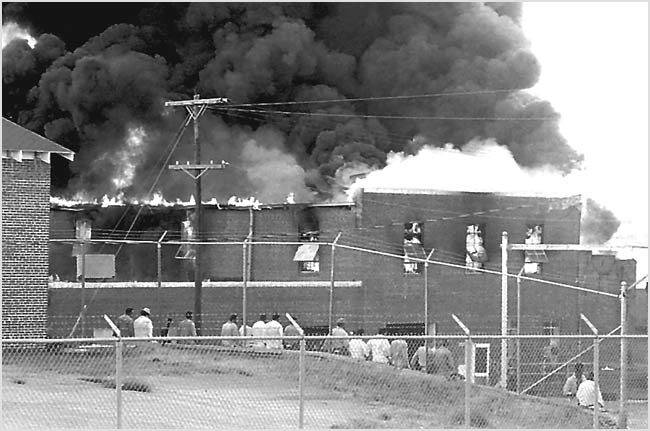 Convicts at Oklahoma State Penitentiary in McAlester watch buildings burn during an uprising that began on July 27, 1973. 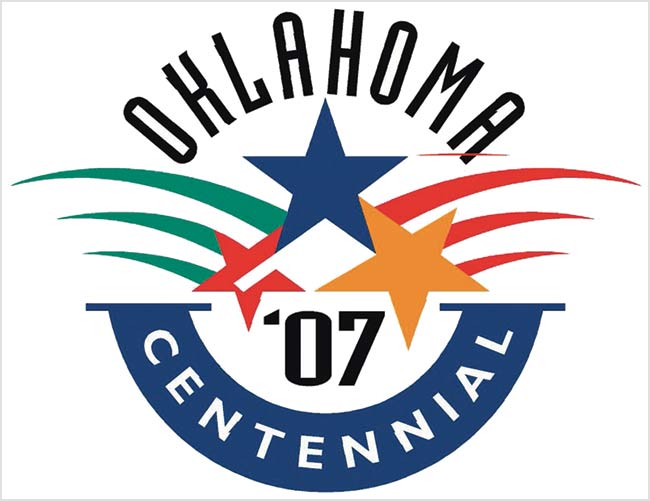 Most of Big Mac, the Oklahoma State Penitentiary at McAlester, had been seized by inmates in the biggest prison riot in the state's history.

Three convicts died at the hands of other convicts. In addition, 21 guards and inmates were injured by homemade weapons, and 12 buildings were burned. About 1,000 of the 1,750 inmates were involved in the July 27, 1973, rioting. A prison spokesman said the trouble was started in the mess hall by five inmates "who were doped up on something" and quickly spread throughout the prison. Twenty-five Tulsa police officers were among about 400 law enforcement personnel and Oklahoma National Guard members, equipped with riot gear, who surrounded the embattled prison. The siege lasted for three days, with lengthy negotiations involving Gov. David Hall to free the hostages. Four high-level corrections officials were injured, although not seriously, when a can of Mace exploded. The last of the 23 hostages held by the inmates were released by noon July 28 but the end of hostilities didn't come until early July 29. Cost of the riot was later set at $30 million. The riot had legal repercussions that smoldered in a class action lawsuit until 2001 and triggered a number of changes in how the Oklahoma Department of Corrections cares for today's 24,984 inmates. The lawsuit had been filed a year before the riot but was changed to class-action status after the riot and U.S. District Judge Luther Bohannon issued injunctions requiring remedial action after finding conditions in state prisons to be unconstitutional. Other judges handled the lawsuit later until 2001 when Judge Michael Burrage ruled that the prison's medical system was constitutional, the last issue involved. Shortly after the riot began, the prison was described as a "nightmare world" by Dr. Rafael Cott, a prison physician who had just left the facility after treating inmates on the floor of the hospital. Warden Park Anderson blamed a shortage of workers and funds for the outbreak. "I testified before the Penal Affairs Committee during the last legislative session that I was short-handed and that we needed more personnel and more money and that there might be trouble here," he told reporters. "It happened." A prisoner's wife who was active in a group called Help Our Prisoners Exist, said, "We knew something like this would happen. We've tried to tell the governor, the board of corrections, the parole board, everyone, that the conditions there were deplorable." She said only about 30 percent of the inmates should have been there; the others, she believed, should have been transferred to satellite prisons instead of being held in maximum security. Some inmates helped hostages escape and some actually fought other inmates to free the guards. Eight highway patrol troopers armed with shotguns were among the first officers to respond to a call for help and blocked the paths of inmates trying to get out. "Those troopers," former Trooper Bennie Durant recalled years later, "stood there with their shotguns and kept the inmates from breaking out of the last gate that was holding them inside the prison. "That's all that saved McAlester from being invaded by inmates," he said. Durant, later a sheriff of Pittsburg County, was the executive officer in charge of the McAlester detachment of the patrol when the call came in about the uprising at the penitentiary. He immediately sent out a call for all on-duty officers and "within 30 minutes, we had a contingent of about eight troopers at the front gate."

Convicts at Oklahoma State Penitentiary in McAlester watch buildings burn during an uprising that began on July 27, 1973.