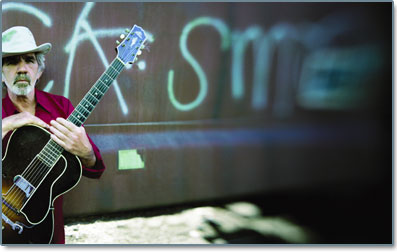 “A lot of the young people don’t deal with the major labels anymore because they don’t want to be told what to do,” says J.J. Cale. “I’m not that way. All my music sounds the same to me.” 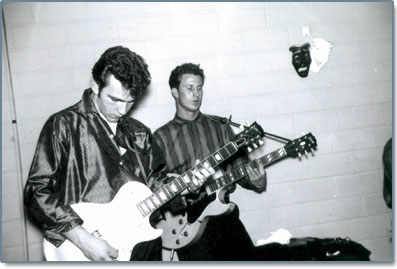 Tuning up for a 1956 Don Wallace teen hop at a nightspot called Cherie-Bob are Johnny Cale (left) and Bob Wallace, who were backing bandleader Gene Crose.

“A lot of the young people don’t deal with the major labels anymore because they don’t want to be told what to do,” says J.J. Cale. “I’m not that way. All my music sounds the same to me.”

Tuning up for a 1956 Don Wallace teen hop at a nightspot called Cherie-Bob are Johnny Cale (left) and Bob Wallace, who were backing bandleader Gene Crose.

What a perfect idea. For his first studio album in eight years, rock legend J.J. Cale returns to his hometown, gets a bunch of his old pals from the late '50s-early '60s rock 'n' roll scene together, and cuts tracks for a new disc called "To Tulsa and Back."

It all worked out so perfectly that it's hard to believe that the whole album started with plan, one that involved the California-based Cale shooting east past Tulsa for about another 700 miles.

That would've put him in Nashville, where he recorded several of his early discs with producer-engineer-music publisher Audie Ashworth.

"The last four records I made weren't connected with Audie. The first eight were. Ironically, those were the ones that sold," said Cale with a laugh during a recent telephone interview. "Audie was really, really good. He was an old song and dance man, so he knew songs real well, and he'd tell me what songs of mine he liked and what songs he didn't.

"I had contacted Audie and said, 'Well, I've had it. I've done everything I wanted to do. Let's make one more record, and let's you and me get together on it like we did on "Naturally" (Cale's first disc, released in '71). You hire all the guys that are still alive, I'll come to Nashville and I'll let you produce, and we'll do it kinda like we did in the old days.'

"See, all my early records I recorded in Nashville, and this was going to be with the old Nashville guys."

Cale and Ashworth planned to go into the studio in September of 2000. In August of that year, however, Ashworth died of a heart attack.

Bas Hartong, however, had different ideas. A veteran producer who had a couple of Cale compilation discs on his resume, he stepped in after his friend Ashworth died, convincing Cale to go on with the project.

"He'd gotten a job with Sanctuary Records, and he called and said, 'You know, John, why don't you go ahead and do that project? I think I can get you a deal with Sanctuary,' " recalled Cale.

It took another two years or so -- as well as a firm deal with Sanctuary -- before Cale committed to doing a new disc. In the interim, he'd been talking with his old friend and fellow musician David Teegarden, and the Nashville project had become a Tulsa project.

"I knew David had a studio, and I said, 'Hey, man, I'd like to come to Tulsa and get everybody we know who's still alive and can still play, and we'll just have a party and make another record,' " he said.

"It was the same concept Audie and I had about Nashville. And that's how that went down."

Of course, once he hit town -- in June of last year -- it was as much a reunion as a recording session. He'd stayed in contact with a few of the musicians from the old days -- including keyboardist Rocky Frisco, bassist Bill Raffensperger and drummer Jim Karstein, all of whom tour with him.

But some of the guys he'd hardly seen since he, and many of them, were busy playing marathon gigs at Tulsa nightclubs almost a half-century ago.

"We had what I called a singer dinner, with Gene Crose and Bobby Taylor and Billy Mecom and Jack Dunham -- the guys I first worked for," he explained. "All the other guys were sidemen, right? I was kind of a sideman. Then I became kind of a singer-songwriter.

"Those four guys, the singer guys, didn't really make their living playing for somebody else. They were bandleaders, singers, the out-front guys. It was so great to see some of those guys."

When it came time to go into the studio, he took the musicians he uses on tour and added a ton of Tulsa A-list players, including Walt Richmond on keyboards, Don White on guitar, Gary Gilmore on bass, Shelby Eicher on fiddle and mandolin and Jim Markham on harmonica.

All of those guys ended up on at least one cut of the "To Tulsa and Back" disc. Other Tulsa notables, including Steve Ripley, Jim Byfield, Tommy Crook, Johnny Williams, Chuck Blackwell, Larry Bell, Tom Tripplehorn, Mike Bruce and Chuck Browning are featured on songs that didn't make this particular disc, but could surface later.

"I think Teegarden and I and all the guys maybe cut another 10 songs that aren't on the album," he said. "What I did was send 'em all off to Bas Hartong, who kind of took the role as resident songpicker. That's what Audie used to do. I mixed everything, and sent 'em off, and they picked and chose."

The CD's 13 tracks include five from the Tulsa sessions. The other cuts are essentially demos that Cale did separately. The former include a minor-keyed swing blues ("These Blues") accented by Eicher's fiddle, a song built around a lowdown riff in classic Cale style ("New Lover") and a world-weary but cautionary song about the abuse of power ("The Problem").

Social commentary continues, along with tunes about love and its flip side, in the Cale solo tracks, especially his elegy for a polluted river ("Stone River") and his observation of street life in "Homeless," which echoes both the milieu and the power of Bob Dylan's "Like A Rolling Stone" with a whole lot fewer words.

Cale said he only insisted on one song making the album, and that was "Motormouth," a driving, cut-time number recorded in Tulsa. Otherwise, he was content enough to let Hartong and the label select the tracks for "To Tulsa and Back."

"A lot of the young people don't deal with the major labels anymore because they don't want to be told what to do," he said. "I'm not that way. All my music sounds the same to me. So I go, 'Well, if you like that one, you've got to sell it on the streets, so get it on out there.' "

$29 in advance at the Cain’s box office, area Albertson’s locations and www.startickets.com; tickets are $32 day of show.