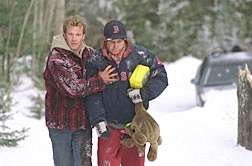 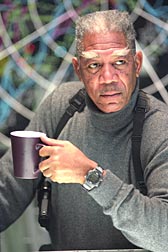 "Duddits" (right) is reunited during adulthood with four friends who saved him from being bullied as a child. Thomas Jane (left) plays one of the friends in "Dreamcatcher."

Below: Morgan Freeman plays a hardcase military man who has spent years fighting aliens in "Dreamcatcher."

Any movie that opens with a meditation on Carl Jr.'s $6 burger can't be all bad. And, indeed, "Dreamcatcher" isn't half-bad. Or even a quarter-bad.

What it is, however, is sometimes meandering and confusing.

While the presence of top-drawer old pros like writer William Goldman ("Butch Cassidy and the Sundance Kid," "Misery") and director, co-writer and co-producer Lawrence Kasdan ("The Big Chill," "French Kiss") ensures a certain level of quality, the multiple story threads they're manipulating never quite come together to form a strand strong enough to hold onto.

At first, we're given what seems to be two separate stories. One is about four male pals (Thomas Jane, Damian Lewis, Jason Lee and Timothy Olyphant) who, as kids, save an apparently mentally challenged youngster from a bad bullying.

That child, nicknamed "Duddits" (whose adult version is played by an unrecognizable Donnie Wahlberg) in turn gives them each mild psychic powers. Some way or other, he's also given them a cabin in the New England wilderness, so they can have regular reunions as adults.

It's during one of these gettogethers that the second plotline seems to surface. During a winter storm, a couple of the pals find a half-delirious guy (Eric Keenleyside) wandering around with what looks like blood on his head and a terrible case of gas, which only gets worse when they bring him inside the cabin. As it turns out, he's hosting an extraterrestrial parasite that eventually leaves his body by — well, by the way most things of any size leave the body.

Top-billed Morgan Freeman shows up later on, as a hardcase military man whose years of fighting aliens may have driven him around the bend.

Eventually, everything comes together — sort of — and there's a big special-effects monster rally at the end that ties things up rather satisfactorily, especially for a horror movie. But in getting there, Goldman and Kasdan eschew the straight road for a lot of twists and turns, and even a dead-end or two. Some of these work well, especially the ones that spring out of character, because the four main characters are exceptionally well-drawn. Some, however, just don't.

Among the latter are several scenes that seem to take place within the mind of Lewis' Jonesy, even though the others appear to know what's going on as well. The bits in question involve a giant repository of files with a circular staircase, a place meant to represent Jonesy's memory. And while this site is cleverly constructed, the whole notion comes off as just weird, and not in a particularly good way.

Film, after all, is a very literal medium. It's not the best way to travel inside a character's head. In print, it's easy to convey the symbology of what someone is thinking or feeling with a few well-chosen words. In the movies, you have to do voiceovers or some sort of concrete representation of internal, abstract ideas — and it usually doesn't work very well.

A final thing to know about "Dreamcatcher" is this: Our oftused phrase "unseemly scenes" — used to designate depictions of things or acts that might disgust audience members — has seldom been more appropriate. The grossout factor is, frankly, pretty high here, especially for a mainstream film. Be advised.

John Wooley, World entertainment writer, can be reached at 581-8477 or via e-mail at john.wooley@tulsaworld.com.