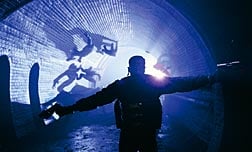 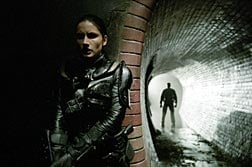 Below: Leonor Varela stars as "Nyssa."

Running with the devil

Saying something has a comic- book plot used to be a perjorative remark. But there are times when "Blade II" could use exactly that. The Blade character, after all, began in a successful and pretty well-written Marvel Comics publication (comics fans will note Marvel honcho Stan Lee as one of the film's executive producers).

But to say "Blade II" is comic- booky does a disservice to comic books. It's actually much more video-gamey, with about the same amount of plot and even more fighting and gore than one of the extremely violent video games that are all the rage with certain segments of the population these days.

There's no denying that the fight scenes are well-staged, full of breathtaking martial arts delivered up in blindingly quick cuts, nor that Wesley Snipes again makes a stolid and commanding presence who's nicely complemented by Kris Kristofferson, reprising his salty old dog role from the first film. But scripter David S. Goyer (who wrote the underrated "Dark City" as well as the first "Blade") and director Guillermo Del Toro ("Mimic") seem content to barely sketch the characters in and then let action, effects and gore carry the picture, instead of serving the picture. And that's a big difference.

What story there is goes like this: Blade -- a half-man, half- vampire killing machine -- takes on a whole bunch of vampires in a series of battles, finally finding his old father-figure pal, Whistler (Kristofferson) held captive by the minions of the undead. (Whistler allegedly died in the first picture, and even though we get a flashback, the reason he didn't die isn't satisfactorily explained.)

With the profane old longhair once again by his side -- joining Blade's new pal, the constantly dope-smoking Scud (Norman Reedus) -- the vampire hunter suddenly gets offered a truce by what's referred to as "the vampire nation." It seems that a new breed of vampire, called a reaper, has come along, and it's so mean and ruthless that neither human nor vampire is safe. In no time, the vampires and Blade's bunch have formed an uneasy alliance, with an elite group of vampire warriors under Blade's command going after the reapers.

Then there's a lot more fighting, some genuinely scary scenes in a vampire dance club, lots of gore, some more fighting, more gore, a plot twist or two, fighting, etc. The end.

Some of "Blade II" is revolting, even for people used to extreme gore effects.

Some of it is so over-the-top that it's ludicrous, especially a hands-only fight scene between Blade and the main reaper (Luke Goss). Most of it is just one long blur of movement and destruction, with vampires exploding into crystalline fragments when they're not spurting blood, ripping throats or breaking bones.

Besides Snipes and Kristofferson, who both turn in about the best acting work possible under the circumstances, Ron Perlman scores as the meanest member of the elite vampire corps, and Leonor Varela (who played Cleopatra on an ABC-TV movie-of- the-week), as a high-ranking vampire warrior, also stands out.

Obviously, the director and Snipes (who's listed in the credits as both a producer and "fight coordinator"), along with scripter Goyer, knew what they wanted here -- a big, ugly, fast, loud, vulgar, bloody movie. They got the job done, too.

"Blade II" is certainly not without interest, and there are attempts from time to time to inject a little characterization or plot into the picture. But mostly, it looks and feels so much like a video game that some members of the audience will feel their thumbs twitching before the final reel.