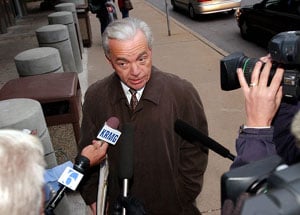 Commercial Financial Services co-founder Bill Bartmann leaves the Page Belcher Federal Building in 2003, where he was acquitted of wrongdoing in company's downfall. 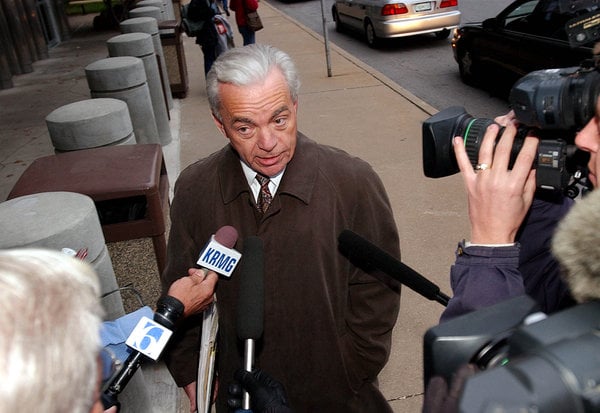 Clockwise, from top left: Commercial Financial Services co-founder Bill Bartmann leaves the Page Belcher Federal Building in 2003, where he was acquitted of wrongdoing in company's downfall. 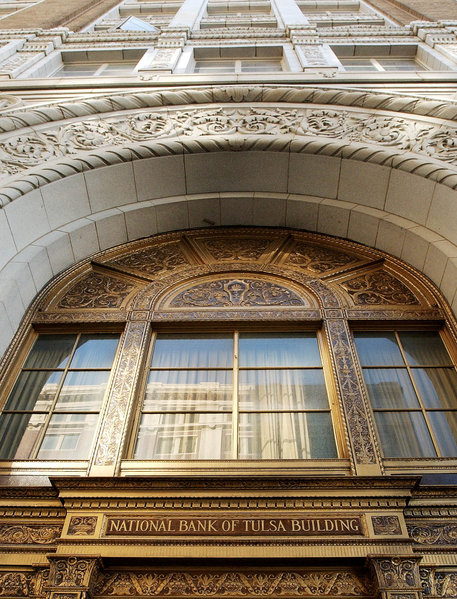 Exchange National Bank, which later became the National Bank of Tulsa and then Bank of Oklahoma, was created for oilmen by oilmen but went bust in the 1930s. 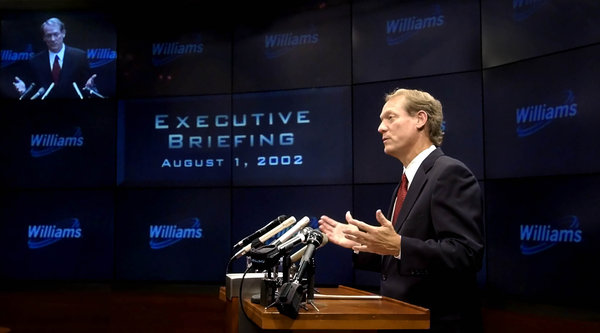 Williams Cos. Inc. chairman, president and CEO Steve Malcolm announces deals to give the company a cash infusion to pay loans due in 2002. The company's stock has since rebounded. 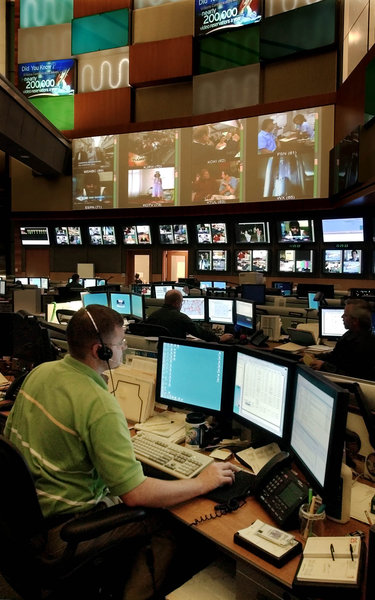 Personnel at the Net Center in the Williams Communications building work in 2002, the year the telecommunications company filed bankruptcy.

Many companies have crashed or been in dire straits over the years.

Tulsa's history is peppered with the demise of large and influential companies. The latest, of course, is SemGroup LP, which filed for bankruptcy protection July 22.

In the early days, oilmen were constantly making and losing money. Even oil giant and Tulsa legend William Skelly lost control of his company to J. Paul Getty, whose company eventually merged with Texaco in the 1980s and later became Shell.

From the 1930s fall of Exchange National Bank to the 1990s meltdown of Commercial Financial Services Inc. and turn-of-the-century stumble of Williams Cos. Inc., Tulsa has weathered the losses.

Not all of the failed businesses were due to criminal or morally corrupt behavior. Some were just caught in the downturn of a business cycle, bad deals or an oppressive economy.

"We have a history of experiencing bumps in the road and coming through that in good shape," said Steve Turnbo, chairman of the State Chamber of Oklahoma and partner in the Oklahoma-based public relations firm Schnake Turnbo Frank PR.

"We're not the only city that experiences corporate tragedies. But when we do, we seem to bounce back in good form and in good style," he said. "I don't know what it is in our hearts and souls that makes us do that any more than what makes us great givers in this community."

Turnbo points out that Tulsa's economic base is more corporate than Oklahoma City's, which is the state capital and home to nearly every government agency.

"The sun doesn't shine every day on every company," Turnbo said. "This won't be the last company that has bad times. But we have a way of getting through it."

The bank represented the pinnacle of Tulsa success in the 1930s oil boom, engaging in international business and maintaining a board of rich and powerful men.

Unknown to investors, oilmen including Harry Sinclair and J.A. Chapman had been sinking millions of their personal wealth into the bank to keep it open. In 1933, it reorganized as the National Bank of Tulsa with $4 million from the Reconstruction Finance Corp. and an equal amount from stocks and stockholders.

But within a month, the bank was forced into receivership. The Exchange Trust, a subsidiary of the bank, was to be liquidated. The institutions had lost about $5 million in less than four years.

A special prosecutor brought charges against 28 of Tulsa's most prominent residents, accusing them of embezzling trust funds from "widows and orphans and helpless incompetents."

The case was thrown out of court, and the board of directors, who had put about $18 million of their money into the bank to save it, were hailed as heroes by Tulsans.

The National Bank of Tulsa continued, becoming the state's largest financial institution. It is known today as Bank of Oklahoma.

The Tulsa-based company sold units in the venture as a tax shelter to wealthy people, including those in show business and executives in Fortune 500 companies.

Getting oil out was tougher than expected. But the company continued to raise money and spend it elsewhere, unknown to investors.

The operation then converted into a Ponzi scheme, in which earlier investors were paid with money from later investors, plaintiffs claimed.

Homestake went into bankruptcy in September 1973, and company President Robert S. Trippett was found guilty of criminal charges in December 1976. He spent one day in jail.

A civil case was resolved in various ways, including a settlement of $100 million and a $130 million jury verdict.

Wes McKinney cobbled together a group of financial institutions to form the larger Republic banking company. He eventually branched out into insurance, construction, and oil and gas. It was energy that brought him down.

Investigators took interest in his business practices in 1979 and determined by 1984 that his assets were worthless and being transferred around like a shell game.

In February 1984, McKinney began kiting checks to cover the expenses of his failing Petra International oil company. At one point, about $5 million in hot checks were being written a day. McKinney deemed it a cash-flow problem. Prosecutors claimed it was a $600 million check-kiting scheme.

McKinney lived lavishly with purchases of a jet, an 80-foot yacht, a $3.6 million Tulsa condominium and original art. Federal officials eventually sold all those assets.

In June 1984, McKinney took off in his jet and fled to Europe. He was arrested a year later trying to sell a watch in Palo Alto, Calif., with 28 cents in his pocket.

McKinney was found guilty in December 1985 on 32 criminal counts. He served 32 months in federal prison and was ordered to pay $183,250. He always blamed the failure on regulators and insisted he could have turned things around if given more time.

The Cinderella story of the success of the debt collection company, Commercial Financial Services proved to be a fairy tale. Its chairman, Bill Bartmann, became a billionaire and national figure among entrepreneurs in the 1990s.

CFS started in 1993 and grew to a reported $187 million income in 1997, employing more than 3,900 people. It ranked sixth among Inc. magazine's list of the nation's fastest-growing companies.

The company prided itself on an employee-centric environment, with annual trips to destinations such as Las Vegas and Florida, and child-care programs. Bartmann was known to buy cars for employees and pay their medical bills.

In 1998, CFS filed bankruptcy after an anonymous letter led to the company's unraveling.

The company pioneered the process of bundling delinquent accounts, assigning a value to the bundles and then selling bonds to investors based on its projection of what could be collected on those accounts.

Ratings agencies gave the bonds a high value based on the company's track record. Then a September 1998 letter to the ratings agencies stated that CFS had been inflating the collection figures and selling the worst accounts to a dummy company controlled by CFS executives. The company went from hiring 45 people a week to laying off 1,541 in one weekend.

A grand jury alleged that Bartmann and co-founder Jay Jones conspired to channel $63 million through Jones' bank accounts from September 1997 through September 1998 to conceal the company's poor performance.

Bartmann was acquitted of criminal wrongdoing by a federal jury in 2003. Jones pleaded guilty to a conspiracy charge and was sentenced to five years in prison.

A last-minute, $2 billion loan from tycoon Warren Buffett and investment banks saved the company from bankruptcy in 2002. The one-year loan carried a 30 percent interest rate.

After the collapse of Enron Corp., once a peer of Williams, rating agencies lowered the credit rating of Williams and other energy traders to junk status. The move led to a sharp drop in trading and triggered additional debts. Shares of Williams plummeted about 90 percent in 2002 to about $2.25.

The company, once one of Tulsa's largest employers, laid off more than 600 people in Tulsa and sold many of its assets to pay down some of its approximately $14 billion of debt.

Williams started growing again, expanding its natural gas business and adding employees. And its stock price has rebounded to more than $30 a share.

The telecommunications company was spun off from its parent, Williams Cos., in April 2001. A year later, it filed for Chapter 11 bankruptcy protection, listing assets of $5.99 billion and debts of $7.15 billion.

Much of its debt was from construction of about 33,000 miles of fiber-optic lines.

Banks started meeting with executives in late 2001 about the debts. But high-ranking officers kept up their enthusiasm for the company's stock, promoting its superior technology, cash in the bank and a growing customer base.

After the filing, more than 490 million shares of common stock became worthless to the more than 15,500 shareholders, many of whom were longtime Tulsans who trusted the Williams name.

The firm emerged from bankruptcy in October 2002 as WilTel Communications Group Inc., a subsidiary of New York-based Leucadia National Corp. In December 2005, Leucadia sold it to Level 3 Communications Inc. of Broomfield, Colo.Tulsa World researcher Hilary Pittman contributed to this report

Commercial Financial Services co-founder Bill Bartmann leaves the Page Belcher Federal Building in 2003, where he was acquitted of wrongdoing in company's downfall.

Clockwise, from top left: Commercial Financial Services co-founder Bill Bartmann leaves the Page Belcher Federal Building in 2003, where he was acquitted of wrongdoing in company's downfall.

Exchange National Bank, which later became the National Bank of Tulsa and then Bank of Oklahoma, was created for oilmen by oilmen but went bust in the 1930s.

Williams Cos. Inc. chairman, president and CEO Steve Malcolm announces deals to give the company a cash infusion to pay loans due in 2002. The company's stock has since rebounded.

Personnel at the Net Center in the Williams Communications building work in 2002, the year the telecommunications company filed bankruptcy.