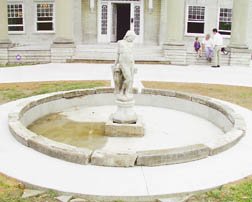 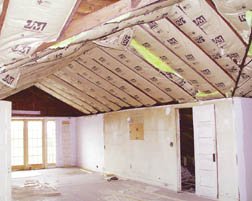 Pictured inset, top, is the third floor of the Tate Brady Mansion in a dilapidated state last November and how it looked recently after dropped ceilings were removed and shag carpeting was taken out. Pictured above is a fountain that was unearthed and a statue that was added during the renovation.

When Tim Lannom bought the Tate Brady Mansion last fall, he thought that restoring it might take him at least five years.

But the entire project will have taken only a year, he said.

It couldn't have been done though, he said, without the help of the neighborhood and the host of volunteers and community service workers who have put in countless hours at the Mansion, sharing their areas of expertise and putting in some elbow grease.

"I'm four years ahead of schedule because I've had so much help," Lannom said. "We've had as many as 35 people here at a time working 16 hours a day. Somebody's always here."

Lannom has plans to rent the first floor of the Mansion -- which includes the ballroom, parlor and tea room -- for weddings, anniversaries, receptions and banquets.

Lannom will take up residence on the third floor.

When he bought the stately home of Carthage stone, it was being rented out to seven families. Lannom's goal has been to return the home to a single-family dwelling and to also once again capture its Greek Revival spirit.

"We've gotten from the Dark Ages to the Renaissance. We're on the cutting edge now," Lannom said.

But it was a huge undertaking. Compounding the challenge was that the Mansion had been converted into apartments in 1942, when the Brady family turned over their home to the government to house servicemen and their families during World War II.

There was a lot of work to be done, but never a shortage of hands.

Piles and piles of rubble were carried out. A butler's staircase was discovered. A fountain on the front lawn was unearthed. Beams were replastered. Tile was reproduced.

Walls erected to make the apartments were torn down in the parlor and elsewhere.

Dropped ceilings were taken out which hid from view the beautiful plaster molding and beams.

The canvas paintings that graced the ceilings, thought to be lost forever, were found. Although they are in poor condition, the plan is to have artists use the designs from the canvases and reconstruct the type of paintings directly on the ceilings, said Suzanne Rogers, overseer of the Brady restoration project.

Layers and layers of paint were removed from a massive amount of woodwork in the entryway to reveal the lovely carved wood.

Shag carpeting was taken out, as well as gold kitchen countertops and cabinets to reveal a multi-windowed tea room.

But why are so many people giving of their time and talent so freely?

Dyanna Hughes of the Camp Fire Boys and Girls was looking for a project and found one at the mansion.

"My club fell in love with this house," she said. "When I came through here as a kid, I used to say that I was going to live in this house one day. Well, at least now I'm working on it."

Volunteers say the Tate Brady Mansion is a historic monument to the Brady Heights neighborhood, and it seems that everyone is feeling sentimental about the crown jewel of the neighborhood which gives it the Brady name.

Bill and Pam Sawyer of S&S Home Improvements are doing the plaster molding work at the Mansion. They both have ties to the neighborhood. Pam's uncle lived in a home, now torn down, near the Mansion, and Bill grew up in a home nearby that is now home to the Osage Expressway.

"Through the years we've always tried to revitalize the north side with mixed success, now we have the chance to do something," Bill said. "We want to see infilling work too. People have built so far out, we feel they're tired of being so far from the city."

The Sawyers recently purchased a home in Brady Heights that they plan to restore.

"Pam and I were about to give up on Tulsa," he said. "We like this area of Tulsa. Everybody knows each other."

It is a place where neighbors help neighbors, Bill said.

When he was hauling off debris from the home he is restoring, 10 neighborhood association members came over to help.

"That's the neatest thing about this association," Sawyer said.

The Brady Heights Neighborhood Association officially adopted the Mansion as a project.

"The idea is to promote home ownership and to promote all the homes in the neighborhood to become single-unit homes again. Several of them have been rented over the years, simply because of their large size," said Brady Heights Neighborhood Association President Tim Lovell.

The Mansion, also referred to as the "Arlington," is a close replica of the Robert E. Lee home which overlooks the Arlington Cemetery and Washington, D.C.

Tate Brady built the Mansion in 1920, banking on the fact that the new city would grow north.

Brady came to Tulsa in 1890 to open a mercantile store and later the Brady Hotel. He was very active in the Sons and Daughters of the Confederacy. In fact, Robert E. Lee's birthday was always a celebration at the Brady Mansion.

History points out that Tate Brady lost his fortune and shot himself in the Mansion's kitchen in 1925.

"The story is that he committed suicide so his wife could collect a million dollar insurance policy," Lannom said. "That was back in the days when you could get away with that."

Adding color to the character of the Mansion is a possible Brady ghost.

Lannom said there have been unexplained footsteps and slamming of doors following a recent visit to the Mansion by Oral Roberts University professor Paul Vickery, who will be portraying Brady during the Historic Home Tour.

A volunteer working alone one night experienced the strange event and kept checking to see if the doors were locked and if anyone was inside, Lannom said.

Does Lannom have the creeps now?

"Nah," he said, perplexed yet unaffected.

After all, restoring and living in the Brady Mansion was his dream.