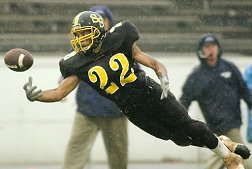 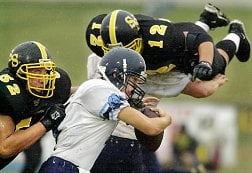 Sand Springs' Michael Brown dives for a pass, and Chris Kuykendall (below, 12) leaves his feet to join Garrett Mouse (52) in pursuit of Bartlesville quarterback Kolby Williams on Saturday.

SAND SPRINGS -- Michael Brown said he wanted to give Sand Springs fans something to take their minds off Tuesday's tragedies.

The junior defensive back picked off two passes in the fourth quarter and his twin brother, Mitchell, rushed for a touchdown as the Sandites upended Bartlesville 13-8 Saturday afternoon.

A Memorial Stadium crowd of about 500 joined in a moment of silence to honor the victims of terrorist attacks in New York, Washington and Pennsylvania. Sand Springs senior Jessica Grayson sang "God Bless America" and the school's band followed with the national anthem.

"It's been a tough week," Michael Brown said. "It was tragic what happened earlier this week. We tried to keep focused and take the fans' minds off what happened."

Just as the game got under way, a steady rain began to fall.

Neither team got much going offensively, whether because of the conditions or the events that befell the nation.

"I thought we played one of our worst halves of football in the first half," said Sand Springs coach Mark Baetz. "It was a tough week. We were up and down just like the rest of the nation. We talked about (the tragedy) all week. We wanted to give our fans something else to think about."

Baetz praised the play of the Brown twins.

"I challenged Michael early in the week because he had gotten turned around on some passes early in the season," he said. "Opponents were starting to pick on him and he's too good for that to happen.

"Michael runs hard all the time. He has good speed and really good strength for his size. He squats around 400."

Following a 3-yard gain by Mitchell Brown, Sandites quarterback Jeff Claybrook faked a handoff, rolled to his left and found Michael Brown for an 18-yard gain. Bartlesville (1-2) was whistled for roughing the passer, giving Sand Springs a first down at the Bruin 19.

Mitchell Brown carried a pair of defenders for a 14-yard gain to the Bruin 5. Three plays later, he followed blockers Sean Ruff and Mouse into the end zone for the winning TD.

Sand Springs grabbed a 7-0 lead late in the first quarter when senior wide receiver Blake Brewer hauled in a 30-yard touchdown pass from Claybrook. The score capped a four-play, 57-yard drive that started with a fumble recovery by Andrew Moore at the Bruin 43.

Claybrook scampered for 8 yards, followed by gains of 2 and 3 yards from Mitchell Brown. But on second-and-3 from the Bartlesville 30, Claybrook faked a handoff and rolled to his left, where he found Brewer behind the coverage.

That's where the score remained until the final two minutes of the half, when the Bruins scored eight quick points.

From there, Collums carried for 2 yards, then bulled his way in from 4 yards out for the go-ahead score. Bartlesville failed on the two-point conversion.

Mitchell Brown finished with 99 yards on 24 rushes, including gains of 34 and 14 yards late in the game.

"I struggled and was getting mad, but coach told me to keep my cool," Mitchell Brown said. "He told me to watch the backcuts and watch the line. Mainly it was the line that helped me."