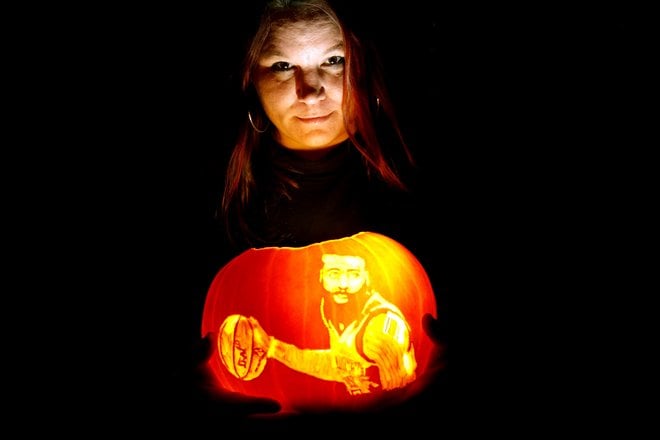 Karrah Jo Youngblood poses with the James Harden pumpkin that she just carved in her workroom in Sapulpa. JOHN CLANTON/Tulsa World 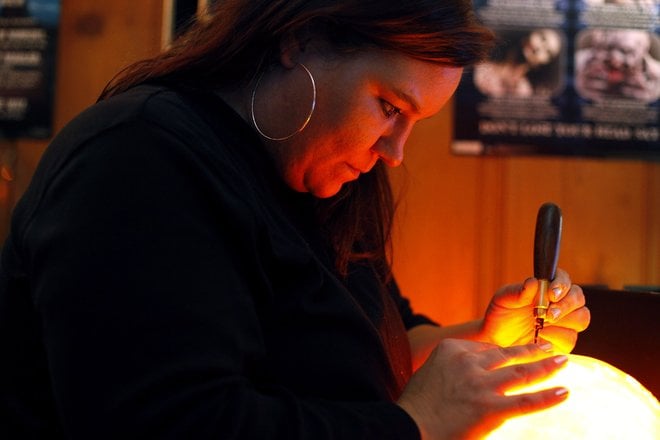 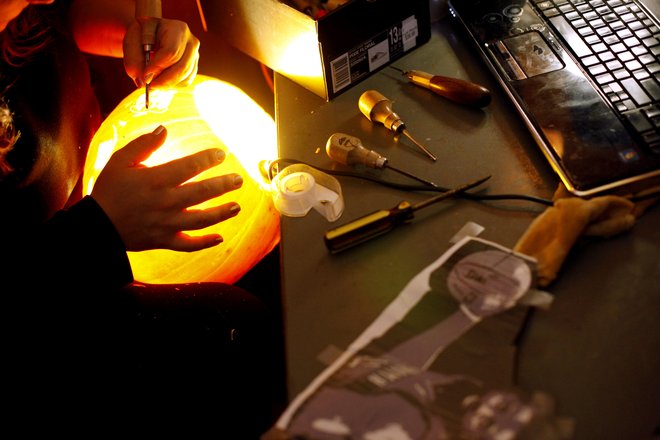 Youngblood works on a pumpkin carving while a light glows from inside. "It's like drawing with light," she says. JOHN CLANTON/Tulsa World 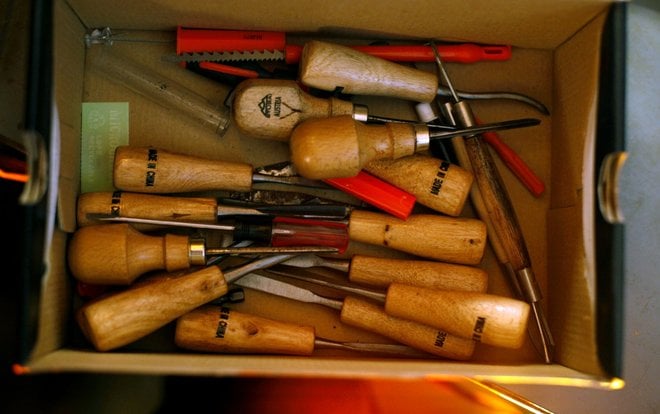 Youngblood's tools include a little knife set she bought online for $30, plus some wood gouges from her wood-carving father and some $2 tools from Walmart. Mostly, though, she uses the flathead screwdriver her sister sharpened with a grinder. JOHN CLANTON/Tulsa World

She didn't cut it off, though - not like she did part of George Takei's nose.

"You can't really erase a knife cut, so you have to pay attention or you may cut off a nostril," she said.

For more than an hour, we watched her brandish the tools of her hobby, including a small serrated blade and a sharpened screwdriver.

"You don't want to hit the edge of this," she warned without even taking her eyes off Harden's face, which, about an hour earlier, was a pumpkin.

"Are you starting to see him?" she asked, tool in hand, a gutted orange gourd in her lap. You could see him, all right - from the Oklahoma City Thunder player's beard and his jersey to the first letters of the Spalding basketball in his hand.

"This one isn't that hard," Youngblood said as she worked. It was her birthday, so she took the day off from her job as a graphic designer for Saied Music Co. and invited us to her home in Sapulpa to watch her craft.

She usually carves in a little office just off the garage, with Halloween lights strewn on a couple of walls and two zombie posters on the wall - one with specific advice on what to do during a zombie attack.

She also had a picture of her curly-haired 5-year-old daughter, Chloe, who went as Richard Simmons last year for trick-or-treating.

Halloween has always been her favorite holiday, said Youngblood, whose family still orders her a Halloween cake. She remembers trick-or-treating as a kid and huge parties each Oct. 31 at her uncle's, with hayrides, a haunted house and scary movies projected on the side of a barn.

"Man, those were the days," she said - like when her parents took her to the pumpkin patch every year, picked out a few, and she'd carve one.

"I just thought that's what everyone does," Youngblood said. She remembers being 5 years old out on the patio with her mom. "She cut the top off the pumpkin and made me stick my hand down in the brains. It was awesome. I have carved one every year since."

And she's become better at it with each year. The first pumpkin she carved that wasn't the "standard triangle eyes" variety was about 13 years ago. With a kitchen knife, she attempted to carve an OU logo. But, as she carved out an O, the center part fell into her lap.

Not one to give up, Youngblood bought a carving kit and had excellent results.

"If everyone bought a $5 Pumpkin Masters stencil book and tool kit at Walmart or Target and followed the directions, they will be blown away by their capabilities," she said.

For a while, she bought her stencils online. After spending $25 on patterns, though, she realized she could create her own - and has done so ever since.

Like the Harden stencil, which she printed off her computer and taped to the side of her pumpkin the morning we visited. Apparently, it doesn't even matter if a pumpkin has "worms coming out of the back," as long as it has one good side.

The stencil is black and white and shades betwixt the two. The white parts, she cuts out; the black parts remain intact. Those shades in between are scraped.

Her tools include a little knife set she bought online for $30, plus some wood gouges from her wood-carving father and some $2 tools from Walmart. Mostly, though, she uses that flathead screwdriver her sister sharpened with a grinder.

After two or three hours, she's done carving and will rinse off the pumpkin. Sometimes, to extend the jack-o'-lantern's life, she'll submerge it in bleach water - 1 teaspoon bleach per gallon of water - for eight hours. That will help it last a week or two.

Then, once a light source is placed inside, it glows - in intricate dimension, no less, right down to minor details, like Harden's tongue.

Youngblood has done as many as four in one day, and she starts as soon as they appear in store produce sections. This year, she expects to do them up to Christmas, as some folks asked her last year for Santa pumpkins.

At about $40 a pumpkin, she sells those she carves or takes commission orders. When no one orders, she carves for the sheer joy of it.

Most of her pumpkins come from Nuttle Farms, just west of Blackburn. It's a long drive, she said, "but their pumpkins cost fractions. Plus, the people there are really nice."

She enjoys a yearly trip to Carmichael's in Bixby. In a pinch, she'll purchase pumpkins at the grocery store.

She'll do at least 30, maybe as many as 50 pumpkins this time of year. In the summer, she'll carve watermelons - but she's not a fan. Too sticky, too watery.

Often, she'll carve celebrities, with John Lennon and Bob Marley among the favorites she's done. Not that she's a tabloid follower; she just likes doing faces.

"If I'm going to do a face, I might as well carve someone recognizable," she said. "You never know if that celebrity will see it and share it with their followers, like Pee-wee Herman did last year.

"I'm shooting for George Takei this year," she added.

And she'll be entering something in the TMZ.com contest again. After finishing Harden, she contemplated the four original members of the rock band Queen. Maybe Justin Bieber - TMZ fans love them some Bieber, it seems.

Now, if she can just find a way to make the pumpkins last forever.

Karrah Jo Youngblood poses with the James Harden pumpkin that she just carved in her workroom in Sapulpa. JOHN CLANTON/Tulsa World

Youngblood works on a pumpkin carving while a light glows from inside. "It's like drawing with light," she says. JOHN CLANTON/Tulsa World

Youngblood's tools include a little knife set she bought online for $30, plus some wood gouges from her wood-carving father and some $2 tools from Walmart. Mostly, though, she uses the flathead screwdriver her sister sharpened with a grinder. JOHN CLANTON/Tulsa World