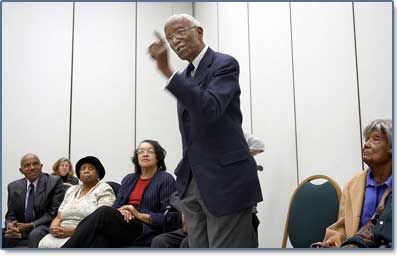 John Hope Franklin speaks on current events concerning the 1921 Tulsa Race Riot during a meeting with plaintiffs and other supporters Monday night at the GreenwoodCultural Center. Franklin urged fellow plaintiffs to “stick together” as their lawsuit against the city of Tulsa and the state of Oklahoma moves one step closer to resolution. 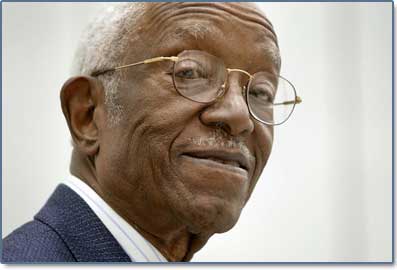 ‘We don’t want to giveup until we get justice.’JOHN HOPE FRANKLIN 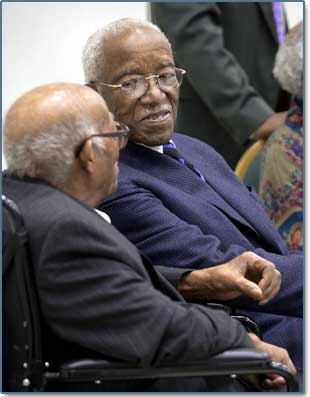 Noted historian John Hope Franklin exhorted fellow plaintiffs to "stick together" as their lawsuit against the city of Tulsa and the state of Oklahoma moved one step closer to resolution on Monday.

The suit seeks compensation for the 1921 Tulsa Race Riot, which devastated the black Greenwood neighborhood.

The 88-year-old Franklin, recognized as one of the nation's pre-eminent scholars, is among nearly 400 riot survivors and other claimants who asked U.S. Senior District Judge James Ellison on Monday to deny city and state motions to dismiss the case.

"We don't want to give up until we get justice," Franklin said. "We're not looking for Cadillacs. We're looking for acknowledgement that people ran over us like dogs."

They argue that the statute of limitations, normally two years for civil cases such as this one, should not apply because black Tulsa residents did not know that the city and state might have borne responsibility for the riot, were too traumatized to seek legal recourse and, in any event, could not or would not have received a fair hearing.

The city and state point out that hundreds of lawsuits were filed by both black and white people following the riot, and all met with an equal lack of success.

The state additionally claims exemption from civil rights cases under the 11th Amendment to the U.S. Constitution.

For now, the two sides are arguing only the statute of limitations and 11th Amendment issues. In the event that their motions to dismiss the case are denied, the city and state have asked Ellison to disqualify the claims of nonsurvivors -- generally referred to as "descendants," although some are not.

Meeting with plaintiffs and other supporters Monday night at the Greenwood Cultural Center, Ogletree asked the group to "pray for us" and said that "we are entering a difficult time."

In previous hearings, Ellison has told the plaintiffs' attorneys that they have "a long hill to climb" to overcome the 11th Amendment and the statute of limitations.

Several speakers, including Franklin, connected the riot to the current debate over the future of Booker T. Washington High School.

Some black residents think the school's proud history and role in the neighboring community has been diminished in recent years and is further endangered by proposed changes in its admissions policies.

Said Ogletree: "We're in a war. Help us fight this battle."

The suit alleges that information uncovered by the Tulsa Race Riot Commission and published in 2001 amounts to new evidence that justifies overriding the statute of limitations. The city and state say most of the "new" information is not new at all but was gleaned from court transcripts and news accounts that were widely circulated in the 1920s.

The city and state also reject the notion that promises of restitution by members of an ad hoc committee that was formed in the wake of the riot were legally binding.

The riot broke out about 10 p.m. May 31, 1921, following a confrontation between black and white people at the Tulsa County Courthouse, then located at Sixth Street and Boulder Avenue. It continued through midday June 1.

The confirmed death toll was 37, but most experts believe the number to have been higher. Hundreds were injured, and thousands were left homeless.

John Hope Franklin speaks on current events concerning the 1921 Tulsa Race Riot during a meeting with plaintiffs and other supporters Monday night at the GreenwoodCultural Center. Franklin urged fellow plaintiffs to “stick together” as their lawsuit against the city of Tulsa and the state of Oklahoma moves one step closer to resolution.

‘We don’t want to giveup until we get justice.’JOHN HOPE FRANKLIN