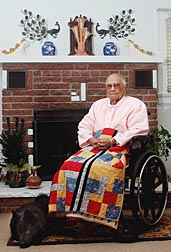 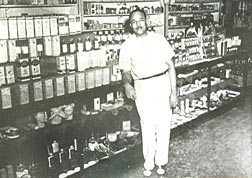 Eunice Jackson, shown with her dog, Ebony, recalls arriving in Tulsa by train in 1917. Jackson, 99, said her family moved to Tulsa from Eufaula so the children could attend school nine months a year instead of four. She became the wife of Samuel “Jack” Jackson, a successful Greenwood undertaker.

Below: Lloyd H. Williams Sr. is shown in 1939 in the drug store he owned and operated on Greenwood Avenue. His son Lloyd also became a pharmacist in the Greenwood neighborhood.

Business people, past and present, in the neighborhood recall its high points as a center of commerce.

Lloyd Williams knew Greenwood in its fullest flower. Born in 1933, he practically grew up in the pharmacy his father, L.H. Williams Sr., operated at 119 N. Greenwood Ave., next door to the offices of The Oklahoma Eagle and across the street from the Dixie Theater.

First called the Black Wall Street around the time of World War I, the thriving business district eventually stretched almost continuously along Greenwood from Archer to Pine streets and branched onto nearby Lansing Avenue.

Practically all of Tulsa's black population lived within a few blocks of Greenwood.

"It was a wonderful place to grow up," Williams said. "I can't really describe it, but it's something I wish everybody had the opportunity to do."

Lloyd Williams, the proprietor of Greenwood Pharmacy, will be among more than three dozen past and present black Tulsa business owners honored during what is being described as a "gospel-shouting buffet barbecue" at the Greenwood Cultural Center, 322 N. Greenwood Ave.

The event, organized by Princetta Newman and Black Wall Street Inc. and sponsored by area churches, begins at 6:30 p.m. Monday. It will feature food from six Tulsa barbecue restaurants.

Tickets will cost $15 for adults and $7 for children.

"My family has had businesses in Greenwood since before the riot," said Newman, referring to the 1921 outbreak that left most of the district in ruins. "I've heard about the Black Wall Street all of my life."

She said the Greenwood business district remained viable into the 1960s, a fact that many younger Tulsans, black and white, don't know but should.

Very few businesses have Greenwood Avenue addresses these days, and all of them are in the first block north of Archer.

When 14-year-old Eunice Cloman got off the MK & T train from Eufaula in 1917, however, the district was a bustling, lively place, she recalled.

"The conductor said, 'All out for Tulsa town, Greenwood Street the battling ground.' "

Tulsa's -- and Greenwood's -- reputation as a "battling ground" was well-deserved. The mix of oil money, working-class poverty and a rapidly growing population made murder and mayhem common. However, there was also a calmer, more refined aspect that drew families such as the Clomans to Tulsa.

"In Eufaula, they had cut the black schools back to four months. We moved here so my sister and I could go to school the full nine months," said the woman, who at 99 is now thought to be the oldest living graduate of Booker T. Washington High School.

"On Thursday and Sunday nights, if you wanted to see somebody, all you had to do was go down to Greenwood because everybody would be there," she said.

The Clomans and their house near Elgin Avenue and Marshall Place survived the 1921 riot, and a few years later Eunice Cloman married Samuel "Jack" Jackson, an undertaker.

In those days of segregation, funeral home director was one of the most lucrative fields open to enterprising blacks.

"My husband worked for Mowbray (an early Tulsa funeral home owned by the Rev. George Mowbray), and Mowbray said: 'Jack, why don't you start your own business. I'll send everybody to you I can.' "

One way or the other, just about everybody eventually saw Jack.

"People would treat the funeral home just like any other business," she said. "They would drop by and say, 'Who do you have today, Jack?' And they would go back and look to see if it was somebody they knew."

"Once it was a woman who came in and found out her mother had died. She didn't know until she looked at the body."

Leonard Holman came to Tulsa during the Depression. He was 17 and his father had just died, leaving behind a little house and a lot of debt. So Holman, the oldest of five children, hitchhiked from Haskell to Greenwood and Archer.

"I just took a chance on getting a better job," he said.

In Haskell he'd been earning 50 cents a day working in a drug store. In Greenwood, his first job was selling popcorn and peanuts and taking tickets at the Dreamland Theater for $1 a day. Later he delivered the Tulsa World and had some other odd jobs.

His big break came when he answered a classified advertisement for a job at Sanders Rones, a downtown jewelry store.

Holman arrived to find a line of applicants stretching around a corner, down an alley and across the street.

After more than half the day and three call-back interviews, Holman got the job.

He was hired to sweep and dust. It might not have seemed like much of an opportunity, but Holman made the most of it and then some.

"I'd ask the jeweler how to polish jewelry. After awhile, Mr. Rones was asking me what I thought when he was ordering stock."

By working in the Tulsa bomber factory during World War II and repairing watches at home, he saved $800 -- seed money for his own store. He opened Holman's Jewelry in April 1946 at 1204 N. Greenwood Ave.

"Most of Greenwood was businesses clear on down to Pine then," he recalled. "Next to me was a drug store. You could buy anything you wanted on Greenwood."

Sometimes, you could see just about anything, too.

But because his father owned a drug store there, Williams got to be his friends' eyes and ears.

Williams' father had moved to Tulsa from the Coweta area. He worked awhile for Crown Drug before he bought the store.

Williams said that when he was growing up, his parents never talked about the Tulsa Race Riot or how Greenwood rebounded.

Where the money came from to rebuild the neighborhood remains something of a mystery.

"That's the question," Williams said. "I don't know. How did they have the ability to reconstruct? It's almost unimaginable."

In his youth, he said: "Greenwood was where everybody wanted to be, especially the 100 block. Greenwood was the 71st Street of Tulsa."

Integration and urban sprawl started Greenwood's ultimate demise in the 1960s. By the 1970s the business district was gone. Urban renewal took most of the old neighborhood. Today, most of it is occupied by Oklahoma State University-Tulsa.

"People say they would like to go back," Williams said. "A lot of it was very good. But you can't go back."

Randy Krehbiel, World staff writer, can be reached at 581-8365 or via e-mail at randy.krehbiel@tulsaworld.com .