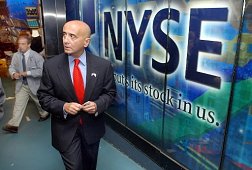 New York Stock Exchange Chairman Richard Grasso walks between trading floors of the NYSE. According to Kevin Phillips' "Wealth and Democracy: A Political History of the American Rich," middle class families held only 2.8 percent of total growth in stock-market holdings between 1989 and 1998.

"We can have a democratic society or we can have great concentrated wealth in the hands of the few. We cannot have both."

Enron, Sept. 11 and the Nasdaq crash came at an awkward time for Kevin Phillips and his ninth book, "Wealth and Democracy; A Political History of the American Rich." These events did not contradict his thesis, but complicated it. Here Phillips attempts to chart and analyze wealth throughout American history up to the current day -- which he contends is one of the periods of most conspicuous and excessive affluence and one accompanied by a notable relative decline in the financial condition of the less well off.

Recent events suggest the end of this era and thus invite speculation as to the next -- yet to be determined -- epoch.

The author is most famous for his first book published in 1969, "The Emerging Republican Majority," in which he predicted the strong new political coalition of Southern whites, right-to- life advocates, evangelicals, corporate executives, small businessmen and middle- Americans which has been a significant, if not totally dominant, political power for the last three decades. President Nixon greatly admired Phillips and his analysis, and he worked assiduously to bring the coalition to life.

Although Phillips seeks to write a history of wealth and spends many pages discussing The Gilded Era -- post Civil War -- in the U.S. as well as similar periods of affluence in England, Spain and The Netherlands, his real interest and focus is income equity in the current era. Here he paints an alarming picture of the widening financial divide between the top and the bottom sectors of the population or what he calls "America's deepening wealth and income concentrations" and its "developing Plutocracy."

This increase in wealth is not merely an economic event, but a political one. "As wealth concentration grows . . . so has upper bracket control of politics and its ability to shape its own preferment." America has gone, he claims, "In just a little over two centuries . . . from being a society born in revolution and touched by egalitarianism to being a country with the industrial world's largest fortunes and its largest rich-poor gap." We are witnessing "nothing less than the collapse of the American social and economic compact."

Such a severe hypothesis demands proof. The reader can judge whether the case is made from the blizzard of statistics presented:

According to Phillips the decline in the relative position of the average Americans was accompanied by a dramatic increase in the amount of time a family spent at work. The average American now works 350 more hours per year than the typical European. Americans not only led the world in number of hours worked, but have the highest percentage of working wives as well as shorter vacation times, shorter maternity leaves and shortest average notice of termination.

Whereas in 1965 only 19 percent of mothers with children under age 6 worked, in 1995 it was 64 percent. All these shifts occurred, according to Phillips, "as federal policy remained preoccupied with capital rather than workers or social conditions."

Phillips contends that in the past we have had both great concentrated wealth and democracy -- not combined -- but rather in cycles. He claims that "the ability to move from one wave to another (is the) genius of American politics."

For instance we saw at the end of the 19th century the transition from the politics of privilege and affluence in the Gilded Age of the robber barons to the egalitarianism of Theodore Roosevelt's Progressive Era. However persistent the pendulum of wealth and democracy has been in the past, it is clear the author feels a corrective swing away from a dominance of money and the power is over due.

What could be done to arrest this slide toward Plutocracy? Phillip's brief outline of possibilities is not likely to please many on the right or center of the spectrum today: higher taxes on wealth and income, taxes on consumption, re-institution of the estate tax; more protection for wage earners and working mothers, and higher tariffs to protect worker's jobs.

The author, while not specifically advocating such changes, indicates that history teaches that they are inevitable because "the imbalance of wealth and democracy in the United States is unsustainable. . . . Either democracy must be renewed, with politics brought back to life, or wealth is likely to cement a new and less democratic regime -- plutocracy by some other name."

This is less a history than a highly documented op-ed article or call to action. Although the case that there is a widening gulf between rich and poor has been convincingly made, there is less evidence of an actual deterioration of democratic processes.

Some may consider it overdrawn or unduly pessimistic, pointing to the increased standard of living of most Americans and the vibrancy of current American political life. But all should agree that this 450- page historical tour of 300 years of wealth and power in the U.S. is an intense and thought-provoking ride.

R. Dobie Langenkamp is a professor at the University of Tulsa College of Law and served as a Deputy Assistant Secretary of the U.S. Department of Energy in 1977-81 and 1997-97.